Parts of California are seriously starting to behave like a third world country. No, we’re not talking about the poop, homeless, and opioid crisis on the streets of San Francisco, we’re talking about rolling blackouts from the state’s electric company, PG&E Corp.

The next round of blackouts are expected on Tuesday, as 1.8 million Californians will experience their fourth planned power shutoff this month.

The warning of the next big blackout came late Monday as PG&E restored electricity to nearly one million residents after the company cut power over the weekend to prevent windstorms from knocking over its powerlines and sparking fires, reported Bloomberg. 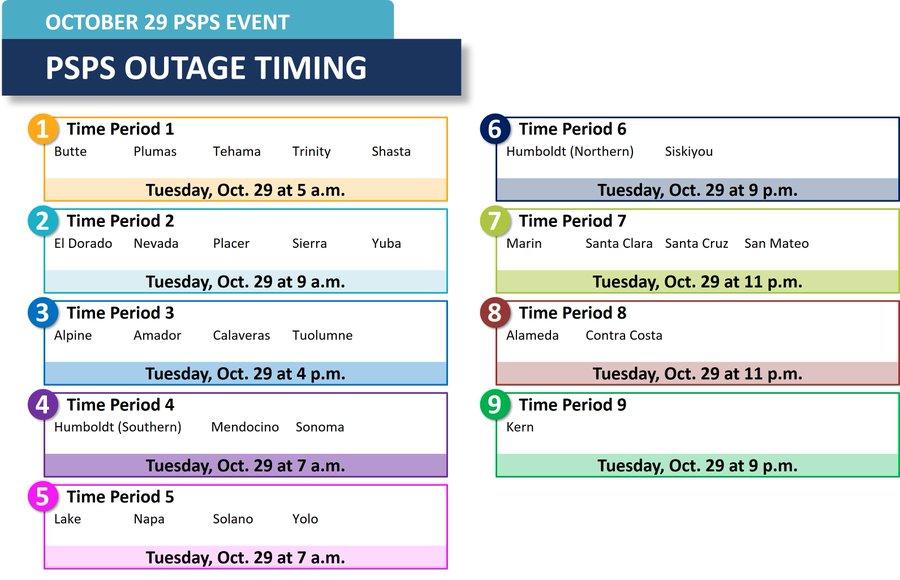 With another windstorm expected for Tuesday, PG&E will reduce power to 605,000 homes and businesses in the Bay Area, California’s wine country, and several regions around Sacramento to minimize powerline accidents that could spark wildfires.

The Kincade Fire, currently burning in Sonoma County, started last Wednesday after a PG&E high-voltage transmission line was blown over by a windstorm.

PG&E has been routinely criticized for its faulty equipment sparking a string of wildfires in 2017 and 2018 that killed dozens of people and destroyed hundreds of structures with estimated damage of $30 billion. PG&E has since filed for bankruptcy as its stock has crashed 95% in 25 months.

“This event will start to impact the same people again in certain areas,” PG&E utility chief Andy Vesey told journalist Monday. “It is the weather — it’s not something we can control.”

Fires have also erupted in Southern California, affecting the ultra-wealthy in their upscale neighborhoods in Los Angeles.

“Leave,” Los Angeles Mayor Eric Garcetti told residents Monday. “The only thing you cannot replace is you and your family. So get your loved ones, your pets, and leave.”
*map

As fires rage across the state and power is shutoff to millions of residents and businesses, the loss of economic activity could start weighing down on the state’s GDP. The economic losses over the last several years are expected to be in hundreds of billions of dollars.

This Is Not A Drill: Why Covid-19 Could Be The Deadly Pandemic That Changes Everything

Peter Schiff: Americans Are In For A Rude Awakening

Why Libertarianism Is Not Mainstream (But Should Be)