Over the years of the war in Syria, an overwhelming amount of evidence has amassed documenting that the so-called ‘Islamic State’ caliphate was established after tens of thousands of ISIS and other foreign fighters were allowed to pour across Turkey’s southern border into Syria.

That NATO’s second largest military with the help of its allies such as the US, Britain, France, and Gulf countries like Saudi Arabia and Qatar facilitated what the State Department in 2014 described as the largest mass movement of jihadist terrorists in modern history should be a scandal of monumental importance, yet the mainstream media predictably ignored it and “moved on”.

And now more bombshell proof of state sponsorship behind the prior rapid rise of ISIS: below are details exposed during unprecedented on-camera interviews of imprisoned ISIS members in Syria spilling all. They confess openly that Turkish military and intelligence simply let them “just walk into Syria”. 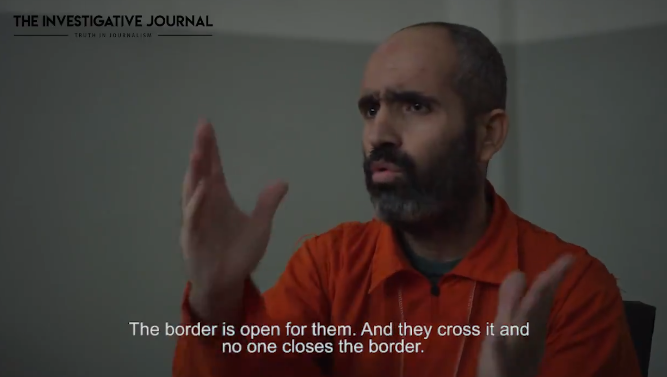 Award-winning journalist Lindsey Snell, who’s been widely published in outlets ranging from MSNBC to ABC to Foreign Policy and others, gained unprecedented access to ISIS prisoners at a facility administered by the Kurdish-led SDF in Hasakah province in northeast Syria:

Abdullah granted us access to a prison in Hasakah that holds around 5,000 ISIS members from 28 different countries. We were able to spend five hours there, touring the various sections and interviewing ISIS militants. Abdullah’s first request to us was that we refrain from telling the prisoners that Abu Bakr al-Baghdadi, ISIS’ leader, had recently been killed in Idlib. “They don’t know. And no good will come from them knowing,” he said.

Those interviewed confessed that their arrival in Syria years prior without doubt had the cooperation of Turkish authorities. Watch the interviews and video report here:

“Turkey let all of these jihadis cross its border into Syria, and now, Turkey is giving [ISIS] the chance to start again.” Read @lindseysnell’s report from an ISIS prison and the al-Hol camp in Northeast Syria: https://t.co/U855qlqXTc pic.twitter.com/RBGJwlxayW

One captured militant, a Turkish ISIS member identified as Murat Kaymak expressed his initial shock at how easy it was to just walk across the border at the city of Gaziantep.

“I thought it was a joke,” he said. “How can such a large portion of the Turkish border be open? With no police or military? We just walked into Syria.”

As journalist Lindsey Snell describes in her report for The Investigative Journal, over a dozen among those interviewed confessed the same thing:

Over the last few months, we have interviewed more than a dozen ISIS members and ISIS wives in Northeastern Syria. Nearly all of them, including those who are not Turkish nationals, said they want to leave Syria and go to Turkey. Most don’t believe they will face any legal consequences for joining ISIS in Turkey. All of them said that when they crossed the border illegally from Turkey to Syria, no Turkish police or military attempted to stop them.

Another named Faisal Demir explained that even the network of ISIS ‘safe-houses’ on the Turkish side of the border was likely run by Turkish intelligence.

“They knew the foreigners staying in the house were in Turkey to cross to Syria and join ISIS. They knew, I am sure,” he admitted. And in separate testimony included in the report:

“Turkey let all of these jihadis cross their border into Syria,” Abdullah said, shaking his head. “And now, Turkey is giving them the chance to start again..”

The other common theme to the interviews is that the ISIS militants believe that if they can make it out of Syria, Turkey will let them go free once on the other side.

When asked if he wanted to return to Turkey, he grinned and said he did. He said he heard about other Turkish ISIS members returning to Turkey, being detained and investigated for a period of weeks, and then simply released. He believes that, although he stayed with ISIS for more than four years, his case would be the same in the eyes of the Turkish government.

“They all want to go to Turkey,” one Kurdish YPJ (Women’s Protection Units) prison guard additionally explained as part of the report. “ISIS started because of Turkey. ISIS is still active in Turkey. And the women here tell us they all want to go and will try to cross at Tel Abyad when they escape.”

And further, according to the report: “A Chechen woman who had been married to an ISIS fighter and living in Syria since 2013 said that she had no desire to return to Chechnya, and that Turkey seemed like a good option for her and her young daughter. She didn’t think she’d be arrested there, because she didn’t believe she’d done anything wrong.”

It must be remembered and bears repeating that Turkey is NATO’s second largest military, and throughout the early years of the war US intelligence worked closely with the Turks in pursuit of regime change in Syria.

Thus the “jihadi highway” across the Turkish border, at least in the early years before and during the rise of the Islamic State, appeared willful, intentional policy.

Chapter 10. Government and the Private Production of Defense

China Unleashes The Bazookas And That’s Just The Start: Here’s What It WIll Do Next