Authored by Alastair Crooke via The Strategic Culture Foundation,

We are led to understand that the unipolar ‘moment’ of US ascendency is giving way – grudgingly – to a multipolar world: a reversion perhaps to a more nineteenth century ‘concert’ of powers (or, of significant ‘poles’ – since size is not always the prime determinant). And that Trump is trying simply to prolong that hegemonic, US moment – albeit through different means, which is to say, adopting seemingly bizarre, and sometimes counterproductive, acts and language, that infuriate the American foreign policy establishment.

But is this view right? Maybe – Trump is more of a crab. Maybe he needs to proceed towards his ends, crab-like, rather than full-steam straight-ahead, precisely because he is subject to such concerted political attack.

Some in Russia think the very notion of America ‘First’ carries ‘in its belly’ the implication of a letting-go of the globalist ‘Empire’ project, and a return to focus on the internal American situation, and the challenges which the US faces internally (i.e. a return to the type of non-interventionist conservatism which Pat Buchanan represented, but which the US neo-cons loathed, and set out utterly to destroy precisely – because it foreclosed on ‘empire’).

In practical terms, Obama can be viewed, as some in Moscow suggest, as the Gorbachev of the American regime, (i.e. the man who began the retrenchment out from certain of the Empire’s more extended nodes); and Trump then, in this analogy, is the Yeltsin of this regime: (i.e. the president who has re-focused on the internal arena, and on reducing the burdens of the republics that used to constitute parts of the Soviet Union).

The retrenchment-and-rebuild-at-home shift is hard. And it did not turn out well for Russia.

The motives for Trump’s focus on China as a hostile challenger is clear: It serves the need of having a simple popular narrative to account for America’s relative decline (it is all China’s fault – stealing ‘our’ jobs and our intellectual property). It provides too, an unequivocal enemy that culturally threatens ‘our’ way of life – and it offers a solution: ‘We shall take back our economy’.

But what may not be so clear is whether Trump is actually so opposed to the notion (in principle) of a concert of powers. Though bearing in mind the neo-con and liberal interventionist rage at Pat Buchanan’s earlier policy inwardness (and scepticism of intervention), it might be unwise of Trump to admit to such inclinations – even were he to have them. Hence, the crab-like sideways motion towards its destination.

Is then Trump’s outreach toward Russia (whilst China is demonised), simply a Mackinder-ish attempt to divide Russia and China from each other, in order for Trump to be able to triangulate his interests between a (separated) China and Russia – and which therefore is integral to a continuing US hegemonic project – or is it not? Or, does it have another purpose? It is, after all, pretty obvious that such a divide-and-rule ruse will never work, so long as the close personal relationship between Presidents Xi and Putin, holds good. Both leaders understand triangulation, and both view the ‘concert’ of poles initiative – as an existential requirement for their states.

Or, is Trump’s continuous effort at outreach to Russia somehow connected to his understanding of how the US might quietly transition from a moment of overextended empire – to something smaller, within a multi-polar framework? 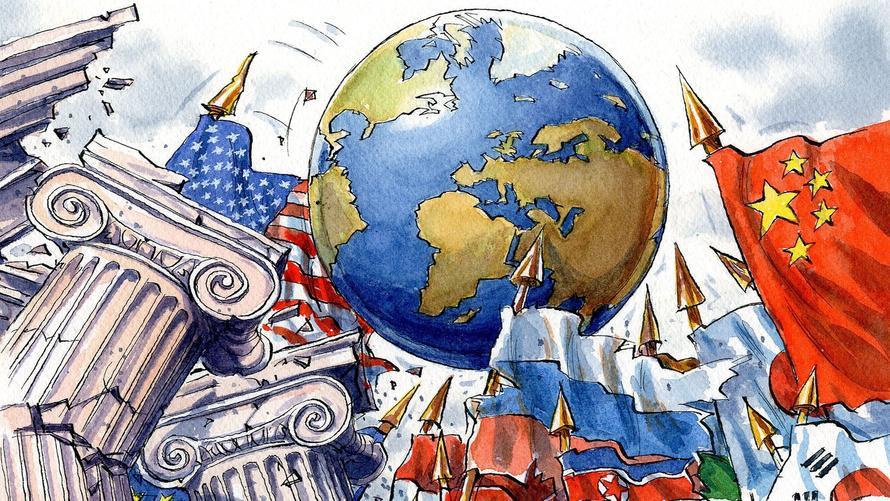 Why might Trump want – even indirectly and covertly – to encourage such transition? Well, if you were hoping to exit one of empire’s more troublesome nodes, you do not want immediately to be pulled right back-in, through another war, just as you start to pack your bags – the Middle East is one very obvious example.

And by escalating against Iran, Trump both appeals to the globalist ‘realpolitik’ component of the deep state, and to those liberals who support interventions under the ‘moral high ground’ banner, but who implicitly also seek to consolidate globalization. Are Trump’s tactics – berating Iran at every opportunity – somehow an effort at neutralising the globalists (mindful of Pat Buchanan’s fate)?

Trump knows at bottom that his core electoral base is isolationist, and wants an end to ‘forever’ wars. He campaigned precisely on this pledge. Is the ‘maximum pressure’, and threats of war, then precisely meant to substitute for actual war? Whilst, at the same time, appeasing Israel, by effectively taking negotiations with Iran ‘off the table’ (i.e. by undoing Obama’s having putting rapprochement on the table – thus unsettling the sense of security of Israel and the Gulf States?).

Iran seems to think so: both Iranian and Hizbullah leaders have asserted rather emphatically that Iran tensions will not result in war. In such a play, Russia plays a key role: It tries somehow to ‘balance’ between Iran and Israel (at least for now). Is not this exactly how a concert of powers is supposed to work?

So when we speak of Trump’s geo-political ‘strategy’, we mean the meshed strategy of firstly retaining key electoral bases of support: the deplorables, of course, but also AIPAC and the Evangelicals (25% of the electorate claim to be Evangelical, and who are attached to a literal, eschatological view of a Greater Israel, in the context of Redemption); and secondly, of weakening the internal currents in overseas states which support globalism and seek closer relations with the US. This effectively strengthens the sides who not want strong relations with America, and by extension, have a clear interest in a multipolar world.

Wherever you look around the globe, America’s policies have strengthened the sovereigntists: i.e. Iran, Russia and China. Is this simply paradoxical – or deliberate? As one Russian thinker has noted:

“Trump’s conservative tendencies and his deep isolationist predisposition, are placing him in the position of being an objective ally of ours (i.e. Russia and China). One who is facilitating the realisation of our project.”

Is this Iran’s understanding, too? Possibly, but in any event, were it to be so, it would fit well with Iran’s geo-strategy. It would not demand of Iran its compliance with the regional status quo (which it would never agree to).

The seven year Iran-Iraq war had left the revolution intact, but the population war-weary. This war however, taught the Iranian leadership the imperative of preventing another head-to-head conventional war – and instead, to prepare its forces for a new-generation unconventional conflict – mounted ‘far away’ from the homeland, and calibrated carefully, precisely to avoid going head-to-head with a state – or its people, if possible.

And just as the US Evangelicals see the coming into being of Greater Israel as an eschatological necessity, so the founders of the Islamic Republic embraced an eschatology (the Jafari School, named after the Sixth Imam Ja’far al-Sadiq), which names Jerusalem as central to the return of the Mahdi, and to the establishment of Islamic government throughout the world – as promised by the Prophet Mohammed. According to both Sunni and Shia prophecies, the army foreordained to conquer Jerusalem is to be comprised mostly, but not exclusively, of people from the region of Iran, with Iranians having a great and important role in the event. Yes: We have almost exact opposite symmetry between the Hebraic and Islamic eschatologies.

A role for Russia as maintaining the ‘balance’ then, is not surprising. This may be how a concert of powers is supposed to work. But will it? Or will it end as disastrously as Yeltsin’s effort, with the collapse of the US economy?

The shift from a unipolar ‘order’ to a concert of poles (in which Iran, Turkey and India may be expected to feature) is a complicated exercise. Much of the Iranian leadership (though perhaps not President Rouhani), may – in principle – think it an excellent idea, were the US to take a turn inwards, and go away. But this sentiment is definitely not reflected in Israel.

In spite of all the unilateral Trump ‘gifts’ to Israel (Jerusalem as capital, Golan as Israel, the settlements as not illegal, etc.), Israel is feeling an existential fear and loneliness. Thus, it is an exceedingly fragile – and indeed increasingly improbable balance – that Trump is trying to mount (with President Putin’s tacit assistance).

It may well collapse – and with it, Trump’s hope for ‘clean’ exit: leaving the Middle East to stew on its own.

And, as a final speculation: Is this somewhat similar to what has been going on between Trump and Xi (i.e. a play analogous to that with Iran)? Is Trump ramping up the max-pressures, and threats of Cold War against China, to substitute for the military war that some of his deep state might love him to fight, but which Trump has no intention of doing?

Is there some tacit understanding that China collaborates in Trump’s blowing of the stock market bubble in the US (China plays well its part in Trump’s market manipulation – with a trade deal always ‘almost there’), as Trump, in his turn, tries to keeps Hong Kong ‘off the table’? All good ‘concert of power’ type trades?

And is the US Congress – with its bill from both ‘Houses’ aimed at putting Hong Kong right back ‘on the table’ – intent, with this bill, on destroying Trump’s implicit collaboration in the creation of a multipolar order?

The Myth that Americans Were Poorly Educated before Mass Government Schooling

Rabobank: “Things Are Getting Real… Everywhere You Look, Decades Are Happening In Weeks”

Under The “Shield” Of US Nuclear Weapons In Europe