Germany Is The Rotten Heart Of Europe

Germany Is The Rotten Heart Of Europe

The crisis in Europe will come from Germany. Germany has entered a period of political crisis that, as yet, has not exploded.

But the pyre is built, the torches lit and all that remains is dragging Chancellor Angela Merkel up and setting the whole thing on fire.

For those that want to understand the fundamental impulses which have led the European Union to where it is today and Germany’s central role one really needs to read Bernard Connolly’s “The Rotten Heart of Europe.”

It’s a book that damns pretty much everyone in their monomaniacal drive for the European Project but, Germany, in particular, to me, comes across the worst.

Because the design of the euro, as a currency, was guided by German industrialists looking for the advantage a single currency would bring them.

This is a point I’ve made many times that the single exchange rate underprices the value of Northern European industrial entities while overpricing Southern Europe’s productive capacity.

Moreover, it raised the effective quality of the debt of those countries far above the market rate. This allowed them to borrow at far lower rates than they would ever have been able to.

This has led to exactly where we are today with massive internal imbalances which have hollowed out these economies, further eroded their productive capacity and competitiveness and left them with a mountain of unpayable debt which is then used as a further means to extract the last of the country’s real wealth when the inevitable crisis hits and the debt has to be restructured.

And to think that this point wasn’t understood by the people who designed the euro is to be terminally naive. This is a point not only made by Connolly but also by Gyorgy Matolcsy, the President of the Hungarian Central Bank.

Thanks to a very generous regular reader I’m reading his book, “The American Empire Vs. the European Dream” right now. And Matolcsy opens the book with a scathing attack on the euro and how it never should have been introduced in the first place.

Because the effects of the single currency have been wholly predictable. But he makes an even larger point than Connolly did in his book. Germany, through wealth extraction and collecting rent thanks to the exchange rate arbitrage.

It may anger my German readers to hear this but, again, if you didn’t think this was the plan by some all along, to colonize countries like Greece that couldn’t be conquered militarily in WWII, then you can’t also see why the rest of Europe is becoming angry.

But Matolcsy goes one step further in his criticism of Germany, saying that if that wealth extraction had been distributed throughout the EU over the twenty-plus years of the euro via investment then things would be far better today.

But Germany never gave up its mercantilist mindset, preferring instead to sell Spanish and Greeks BMWs and Porsches while lending them the money at suppressed interest rates to do so.

And then when the bills come due demand austerity to pay them back and call them deadbeats in the process.

That’s why Germany, today, is the rotten center of a crumbling European would-be empire. And why everyone, including Germans, will now be impoverished as the mountain range of unpayable debt collapses.

Empires always rot from within.

The American empire is facing the exact same problem, but because it is the world’s reserve currency and has the biggest synthetic short against it will simply get hit later.

This is why the Dow Jones Industrials and the S&P500 are trading at all-time highs despite President Trump’s latest trade war salvos at China and the German DAX is struggling to best its 2018 high. 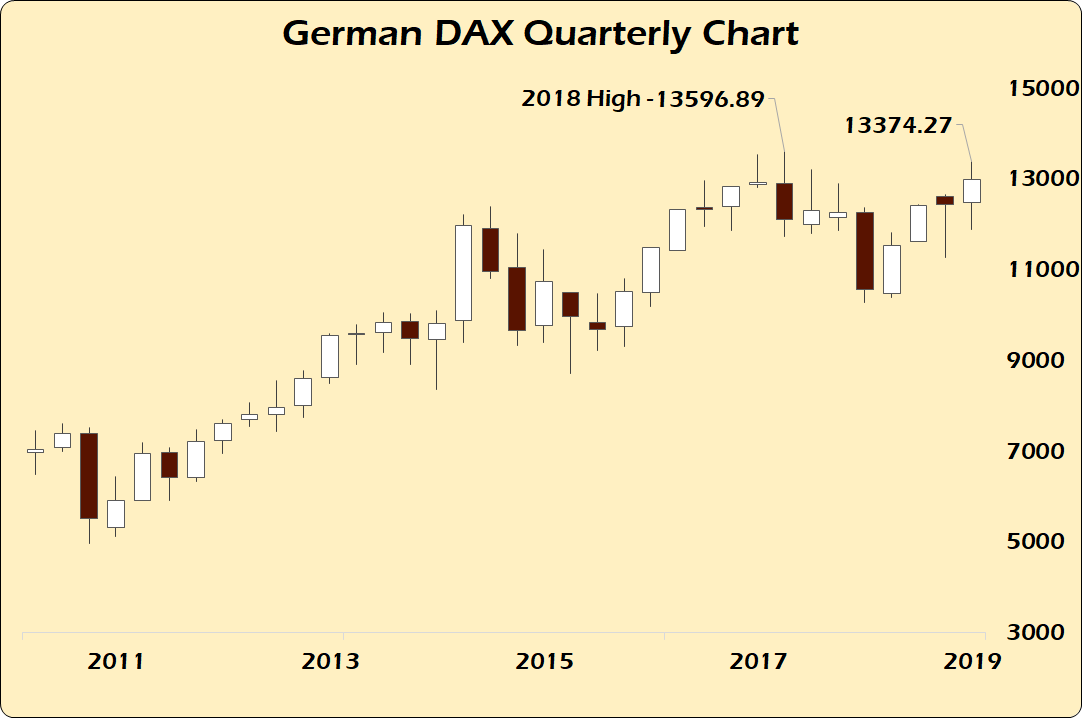 The Dow is sniffing out the differences in the political and economic uncertainties between the U.S. and Germany. Because …

The big news is that Angela Merkel’s coalition partner, the Social Democrats (SPD), just elected new leadership that is hostile to the governing coalition as they blame Merkel for their collapse as a political force nationally. That puts Merkel’s political future in jeopardy or, at a minimum, ensures she has even less control over a mostly gridlocked German government.

For the past couple of months we’ve seen the markets in general breath a sigh of relief after the Fed and ECB stepped in to provide liquidity.  But that doesn’t fix the underlying problems, it only delays them for a few more months by reflating the yield curve, in this case the U.S.’s and Germany’s.

But is the reflation trade the new dominant one or simply a lull between crises, as Jeff Snider at Alhambra Partners suggests?

My guess is the latter as the Fed keeps piling term Repos onto its balance sheet, now more than $207 billion since September, and another 42-day repo operation yesterday that was 2x oversubscribed.

Sure that could be normal quarter-end shenanigans but why? And will we be asking these same questions when these 42-day repos expire in late January?

The bigger questions is what is causing U.S. banks to need so many dollars to keep the money markets liquid? And why is everyone struggling with this dollar shortage?

Because everyone is feeling the same thing, something is going to change in a big way and when it does they want dollars, not euros, pounds, yen or yuan.

The German economy is slowing. It has been for more than a year.

And when the reflation trade is over, markets that haven’t made new highs will be much more vulnerable to collapse. Germany’s multi-generational mercantilist empire has reached its zenith. It can’t push it any further without conceding political ground to the rest of Europe or abandoning the very thing that created the empire in the first place, the euro.

That’s the central problem which sits at the heart of the European Project. And it can’t be papered over much longer.

Join my Patreon if you want help putting the events of today into historical context . Install the Brave Browser if you want to remain freer to seek that help.

“We Can’t Go On With Business As Usual”: NYC Comptroller Calls For ‘Citywide Shutdown’ As Virus Hits City Schools