As our fragmentation accelerates, shared economic interests are ignored in favor of divisive warring camps that share no common interests.

That our society and economy are fragmenting is self-evident. This fragmentation is accelerating rapidly, as middle ground vanishes and competing camps harden their positions to solidify the loyalty of the “tribe.” All or nothing, either-or binaries are the order of the day: you’re either 100% with us or 100% against us, you’re either part of the solution or part of the problem.

As fragmentation accelerates, “tribes” splinter into warring groups who compete for members of once-broad-based movements. Moderation is no longer tolerated as it smacks of mixed loyalties or (most dangerous) independent analysis and action.

What’s striking is the complete absence of economic class loyalty or identity: Few if any feel any shared identity with other workers, or feel any loyalty to a class that shares economic interests. Identities and loyalties are to ethnicity, gender, faith, political ideology or sports teams; shared economic interests simply don’t register in the U.S.

This is a remarkable divergence from past eras of social disruption and discord, as in past eras workers banded together to wield the political power of organized large numbers to demand an end to child labor, 8-hour workday, and other basic rights that were denied by an exploitive Gilded Age class of crony capitalists.

Imagine millions of gig-economy workers, and millions of their allies / sympathizers– boycotting Uber and Lyft to force these corporations to accept more of the risk they’ve offloaded onto the gig workers.

Imagine tens of millions of people boycotting Amazon to support its exploited work force, or boycotting Too Big To Fail Banks for ripping off customers. These economic identities and loyalties were once common; in today’s fragmenting economy, the Titanic is sinking and the steerage passengers (a.k.a. the working class) feel no class identity with their fellow steerage passengers.

As I noted in Misplaced Pride: Most of the “Middle Class” Is Actually Working Class, most of the people who identify as middle class are actually working class: they own few assets that generate unearned income, they’re burdened with debt and their social mobility is limited.

This absence of class identity makes it extremely easy to control the fragmented masses. Nothing could be better for the ruling elites than a fragmented, disintegrating social order that lacks the most basic appreciation of shared economic interests.

When cooperation fails to deliver what was promised, disintegration is the next step. As historian Peter Turchin has explained, when a fundamental scarcity of positive economic and social roles leaves the majority of society in the dust, social discord is the result.

1. An over-supply of labor that suppresses real (inflation-adjusted) wages

2. An overproduction of essentially parasitic Elites

The ruling elites can manipulate financial metrics, but they can’t manipulate rising wealth/power inequality or social discord. The nation is fragmenting because the Status Quo is failing the majority of the citizenry. The protected few are reaping all the benefits at the expense of the unprotected many.

As I have outlined many times, this guaranteed-to-collapse asymmetry is the only possible outcome of our socio-economic system, which is dominated by these forces:

1. Globalization–free flow of capital, labor arbitrage (workers must compete with the lowest-cost labor around the world).

3. Pay-to-play “democracy”– wealth casts the only votes that count.

5. A political system stripped of self-correcting feedback and accountability.

As I explain in my book Will You Be Richer or Poorer? Profit, Power and A.I. in a Traumatized World, policy tweaks only provide an illusion of reform that serves the need of those at the top to obscure the systemic injustices and unsustainability of the extractive, exploitive, predatory, parasitic system that’s enriching them.

The social and economic buffers have thinned, leaving the entire system increasingly fragile: we sense this, but are unable to identify with our own economic class, and so we’re left powerless and fragmented. 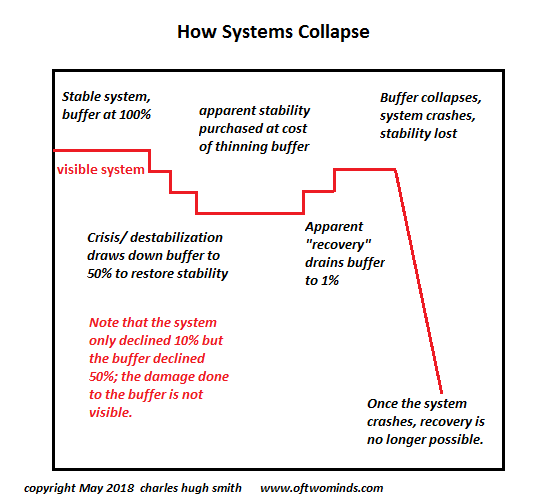 The status quo’s “solutions” are the drivers of collapse, as depicted in this chart:

As our fragmentation accelerates, shared economic interests are ignored in favor of divisive warring camps that share no common interests. This is how societies decay and collapse. We’re experiencing it in real time.

Face masks are effective at STOPPING the spread of the coronavirus through speaking, NIH study finds

What Happens to the U.S. Population If Immigration Rises Substantially or Halts Entirely?