One of the big “hopes” heading into 2020 and the new decade, is that the reflation trade is once again coming back to life as the yield curve has steepened rather dramatically in recent months, commodity prices have quietly strengthened in the last few weeks, with US breakevens rising, cyclical stocks (modestly) outperforming, and China PMI rising to about 50.

Then again, not everyone is buying it. We noted on Friday that as part of Charlie McElligott’s near-term outlook, the quant is fading the reflationary groupthink, largely for tactical, if also several secular reasons.

Then there is the risk of too much reflation. As we noted in a recent article discussing Morgan Stanley‘s cross-asset take on markets in 2019 and its near-term outlook, the bank warned that it was not that long ago, in 2018, when markets viewed a rise in inflation as more problematic. In 2019, every asset has rallied. But in 2018, almost every asset declined, and markets began to worry that excess capacity in the global economy was being used up, or as the bank summarized, “Inflation is a risk to that we need to watch”, which we then paraphrased that “for all those hoping that reflation emerges in 2020 as a dominant theme, be careful what you wish for – you just may get it…”

Others are similarly skeptical: in a note sent out on Friday by Nomura’s “other” quant, Masanari Takada, writes there are three specific things investors should focus on before wading into the Reflation trade.

The first thing is the state of global geopolitical uncertainty, noting that “since the middle of this decade, increased global political uncertainty has put downward pressure on the economy and prices.” Takada thinks the present disinflationary tendency is an extension of this, “with political uncertainty playing a greater role than any concern over the economy itself.” From this angle, Nomura notes that while the first-stage trade deal between the US and China is good news for risk sentiment, there are a number of major political events coming up in 2020, including a prospective second-stage US-China trade deal and the US presidential election. As such, Takada concludes that “the question of whether the first-stage trade deal brings leads to reflationary conditions without a hitch cannot be considered in isolation from these future events.” 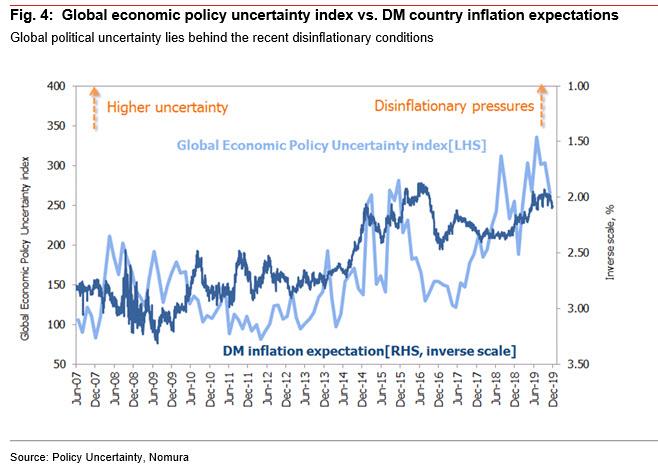 The second trigger for jumping into a reflation trade according to Nomura is a more pragmatic one: namely whether trend-chasing CTAs are joining in the reflation trade… which they aren’t. While most CTAs are backing out of disinflation trades (such as long positions in bond futures or short positions in commodities), they have yet to go any further. So unless CTAs start accumulating reflationary trade positions in earnest, “any rises in interest rates or gains in commodity prices that come along may turn out to be short-lived.”

Looking at the benchmark of reflationary inflection points, US Treasuries, CTAs have closed out the bulk of their long positions in major government bond futures markets. If nothing else, Takada thinks that trend-chasing investors no longer have any incentives to continue making disinflation trades that assume downtrending long-term interest rates. That said, CTAs have not yet taken to staking out short positions in bond futures. 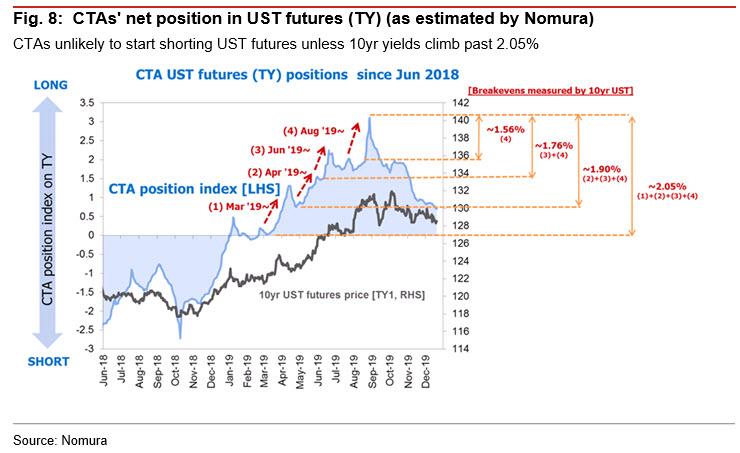 Furthermore, currently, CTAs have “square” market-neutral positions in both COMEX copper futures and WTI crude oil futures (and although CTAs have fully liquidated their short positions, they have from that point switched into wait-and-see mode). Of these two CTA positions, the aggregate net position in COMEX copper futures in particular has historically been strongly correlated with global manufacturing momentum (as measured by manufacturing sector PMI readings for the US & China). Although the manufacturing economy does appear to have found a floor, Nomura thinks that CTAs’ present position in copper futures is premised on quicker economic growth than there is currently evidence for. 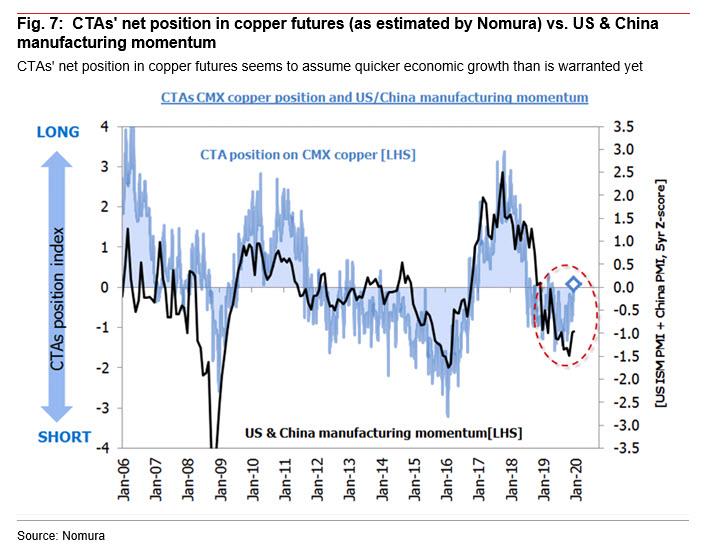 Last, but certainly not least, Nomura believes that investors thinking of wading into the reflation trade should check whether China is pursuing credit expansion (as we have shown recently, China has nearly given up on an endogenous credit boom). As we have noted repeatedly in previous years (recall the thesis that China’s credit impulse is all that matters for the world originated on this blog), peak periods for the reflation trade have historically tended to be preceded by the proactive expansion of credit by China’s policy authorities (and vice versa). One can think of the performance of long-term holdings in terms of the 24-month Sharpe ratio (risk-adjusted return) for the performance of value over growth (buying value and selling growth) in global equities (MSCI ACWI). 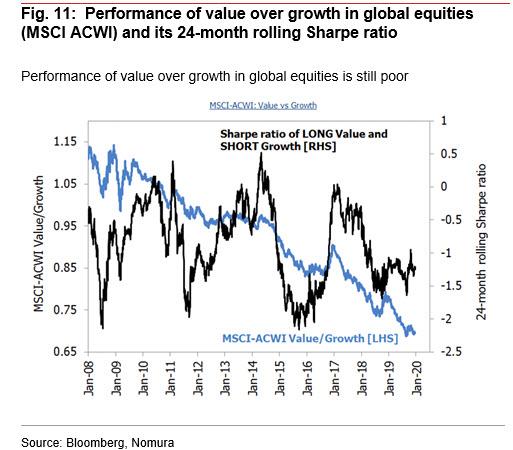 The data show that this Sharpe ratio has been linked to China’s “credit impulse” (change in new credit issued as a percentage of GDP). What becomes apparent here is that the policy response of China’s authorities since the GFC has had a substantial impact on the global credit cycle. It may be difficult to even speak coherently about reflationary conditions taking shape in 2020 without an active effort by China to expand credit. And what is most troubling, is that as the yellow line below demonstrates, China’s credit impulse has barely stirred above its post-crisis lows for two simple reasons: China has too much debt and its financial system is constantly on the edge, and facing a barrage of defaults as a result. 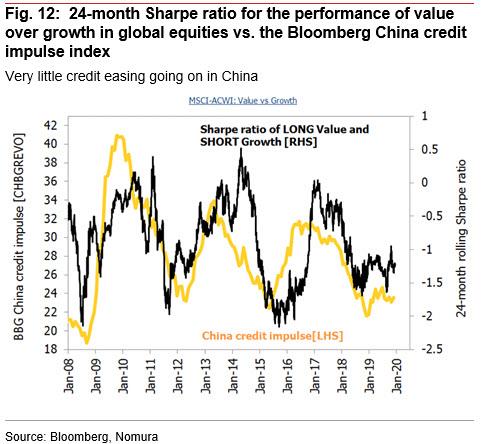 And since any sustainable global reflationary impulse – beyond the initial burst traditionally catalyzed by central banks – always comes from China, anyone hoping that the meager push higher in China’s credit impulse over the past year will be sufficient, will be greatly disappointed.

As the following DoubleLine chart shows, the recent curve steepening – for many a proxy of the reflation trade and evidence that it is working – is nothing more than another Fed-created artifact, and the only reason the 3M10Y curve has steepened substantially in recent months is because of the Fed’s QE 4 “NOT QE” has sent the Fed’s balance sheet higher by nearly $400 billion. 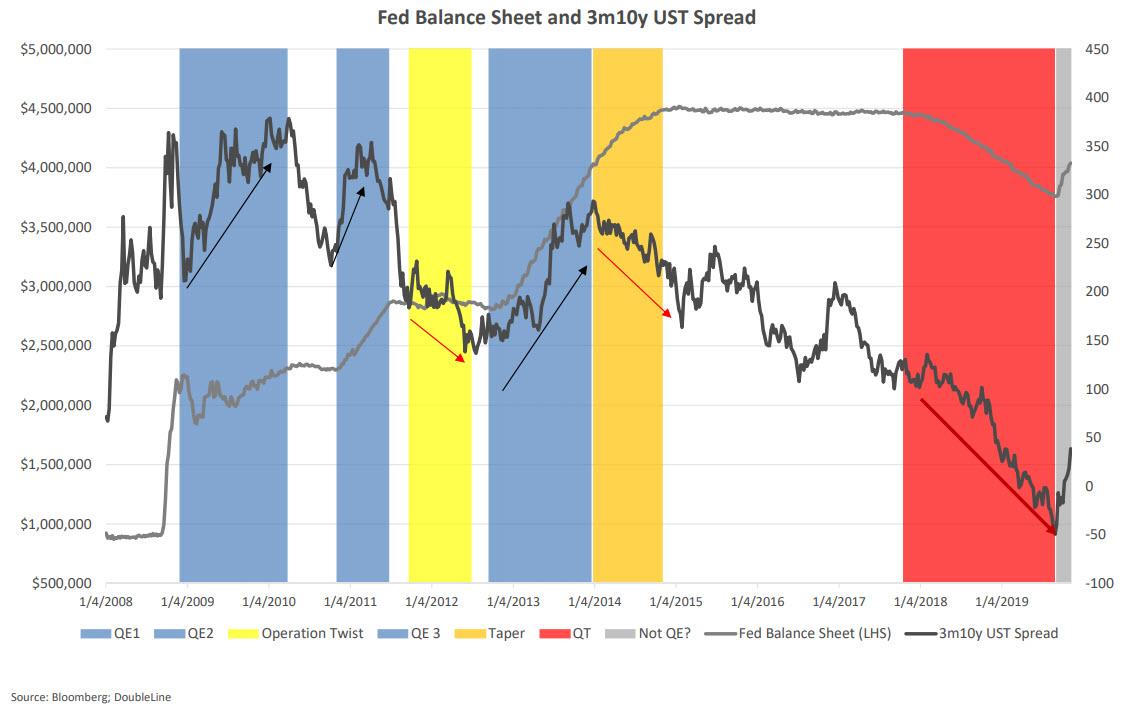 And while the return of QE – sorry, never, ever call it QE, the injection of up to $1 trillion in liquidity in 5 months is just to “fix” the broken repo market, pinky swear, cause everything else is just peachy – has once again stirred reflationary animal spirits, there will come a time in early 2020, when the Fed will end this latest gargantuan balance sheet expansion (absent a market crash of course). In fact, according as Morgan Stanley’s Rate Strategists expect, “the Fed will expand its balance sheet through April/May. After that, markets may once again have to confront a world with limited trade  progress and no further Fed support.”

In other words, without a Chinese pillar of support, without validation from CTAs, and with the Fed’s “NOT QE” set to end in April, the reflation trade is nothing more than another Fed-created headfake, and has at most another 4 months before financial gravity, and a record $255 trillion in global debt, unleash the deflation trade.

As Long As Enemies Of The State Keep Dying Before Trial, No One Should Trust The State