Here Is The Last Ever Gartman Letter, In Which Dennis Shares Lessons Learned… And A Warning

Here Is The Last Ever Gartman Letter, In Which Dennis Shares Lessons Learned… And A Warning

Today is a historic day: not only is the last day of a fascinating, tumultous decade, it also marks the end of a three decade tradition: the daily publication of The Gartman Letter. As we reported last month, today the final edition of Dennis Gartman’s iconic newsletter will hit client inbox one last time, after which the 69-year-old “world-renowned commodity guru” is done waking up at 1am every morning to tell you what the market will do (or won’t, as the case may have been more often than not in recent years) and will shift “to a totally different and much less rigorous life… perhaps producing a biweekly commentary and a podcast or two each week as we deem it necessary.” 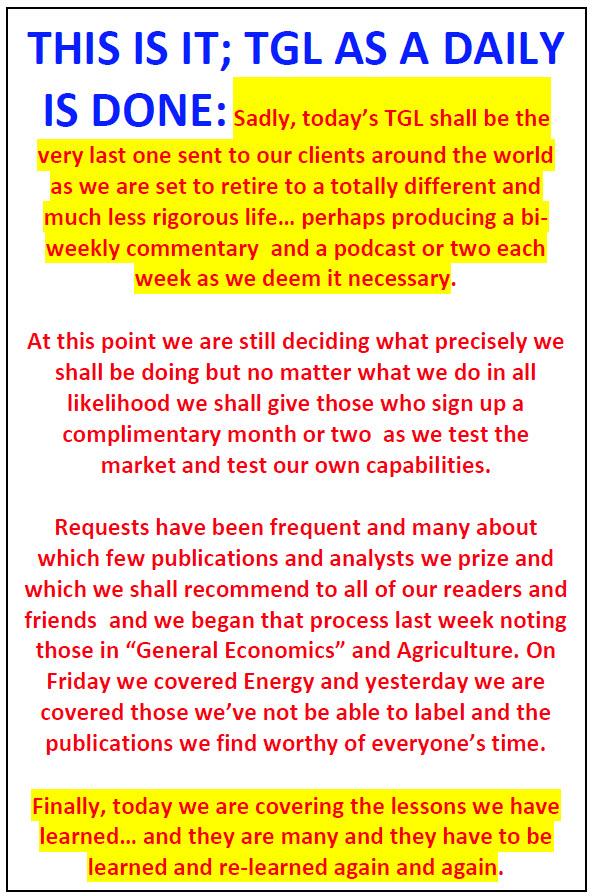 But as Dennis goes, if only to return shortly in some abbreviated media format, he has one last warning to the bulls, pointing out that most asset classes today have unappealing long-term expected returns, and that stocks are “either overvalued or extremely overvalued right now.”

However, as Barron’s Mark Hulbert who recently interviewed Gartman writes, instead of merely stretched fundamentals, Gartman’s pessimism derives from deeper place: namely, what he perceives to be the absence of fear among market participants and a pervasive lack of experience. And with an entire generation or two having never witnessed a sharp market drawdown, Gartman warns that the coming bear market will “do real and perhaps severe damage to portfolios everywhere.”

… we are quite certain that when this bull market ends it shall end very badly for such markets always do end badly. The buyers have enjoyed having the investment winds at their backs. But those winds will eventually shift course and when they do shift, they shall swamp everyone… the reckless neophytes as well as the conservative, sophisticated investors alike. When the next bear market comes… and IT WILL COME!… those who out-perform will be those who lose the least for when the market does fall 25-30% in some twelve-month period the manager who is down “only” 9% will be the hero of the age.

As Hulbert adds, to Gartman the current environment as a “kids market,” relying on a phrase introduced in the 1960s by George Goodman, in his classic book The Money Game. Goodman used the phrase to refer to an investment environment in which the traders making the most money are those too young to remember the last bear market.

A market for 9 year olds https://t.co/5xbdpnaZT5

Gartman – who in January 2016 famously predicted that he “won’t see $44 crude in my lifetime” only for oil to soar just a few months later – describes today’s “kids” as “young, brash, utterly naive, ill-educated, egregiously overconfident, neophyte-yet-fearless ‘investors’.” And with kids taking over, “market veterans” such as Gartman are left to do little more than stand on the sidelines, “fearful yet envious” of the kids’ profits.

That said, this isn’t the first “kids market” Gartman has encountered in his career, and as he points out, all have ended badly, as will this one. When it does, the “all-too-easily-made profits [of today’s] kids” will evaporate,” echoing a warning finance experts handed out to bitcoin billionaires who had to be put on waitlist for Lambo purchases back in early 2018 before the crypto market tumbled.

To Gartman, who invokes the vivid imagery created by Dante who needed Virgil as a skilled guide to take him across the circles of hell, avoiding this boom-to-bust cycle requires a wise advisor with the battle scars of having lived through a bear market, because as Gartman says, “no amount of education can substitute for that experience.” That’s why he doesn’t trust “a 26-year old who has just gotten his M.B.A. and has no experience.” His advice: “Don’t follow anyone who hasn’t been around for at least an entire cycle.”

Unfortunately for Gartman, and with the blessing of the Fed whose mission has mutated into making sure idiots appear as market geniuses in an artificial market that will never drop, it is the 26-year-olds that have the last laugh for now. To be sure, Dennis remains patient and fully acknowledges that the stock market may continue rising for a while longer before eventually succumbing to a bear market. But even if it does keep rising, he told Barron’s that its potential reward relative to its potential downside is far less attractive than it is for agricultural commodities, which is currently Gartman’s favorite asset class, as it is “unbelievably inexpensive right now.”

We leave it to 2020 to validate or disprove Gartman’s prediction (if his track record in retirement is similar to his professional one, the market may very well never crash), however since we commiserate with Gartman who clearly was caught offside by last decade’s centrally-planned market in which nothing makes any sense any more, we wish to convey some of Gartman’s lessons learned over more than 30 years of watching various markets, which he published in the final edition of the Gartman Letter and which we republish below for the benefit of the next generation of traders:

WHAT HAVE WE LEARNED: This being the final edition of The Gartman Letter as we drift off to a far less onerous schedule producing a bi-weekly written commentary and doing pod-casts on an as yet undecided upon schedule, we need to leave our friends/clients/readers around the world some thoughts on what we have learned about the markets and so we are today doing exactly that.

Firstly and perhaps most importantly we’ve learned that the single most import Rule of Trading is to never, ever, ever add to a losing trade. As our old friend, Paul Tudor Jones, says “Averaging losers is for losers.” If one buys a stock at $50/share and it goes to $45, why are you buying more when the market is telling you that your decision was the wrong on? You may simply be early but early in our business is the same as being wrong; or you may have the trade/investment thesis entirely wrong and the stock is headed toward much lower prices or even perhaps to bankruptcy. Enron was a highly touted stock at nearly $91/share; it was bankrupt two years later! Better it is to wait until the stock in question is profitable for then the market is telling you that you are right; that your thesis is the correct one; that the investment wind is at your back and that the investment coast is clear.

We have learned this the hardest of ways, by having broken the rule; having averaged down and having almost always suffered even greater losses than we had originally suffered. Indeed, the market’s gods are wily enough to entice you into averaging down once or twice and for that to have proven profitable, only to trap you into the third time when the market moves materially and seemingly relentlessly against you in a career ending collapse.

Secondly, we have indeed learned that as Lord J.M. Keynes and Dr. A. Gary Shilling told us, the markets can remain illogical far longer than we can remain solvent. Our investment corollary to that is that the market will return to rationality the moment you have been rendered insolvent and then shall turn on the proverbial dime and move in the other direction. It happens all the time. It will happen again; count on it!

Thirdly we have also learned that as Keynes said, “When the facts change, I change.” That is, when the market and/or the fundamentals as we had understood them turn against us it is best to admit that the facts of the investment in question  have changed and that holding on is an illogical and almost always a very costly decision.

We have learned that markets move in very large cycles and that what is very popular now will inevitably become unpopular and that what is manifestly unpopular now shall become popular again. As Ecclesiastes tells us, “To everything there is a season” or as Caesar’s servant reminded him “Ubi sunt qui ante nos fuerunt?”… Where are they now? We have learned too that trying to anticipate the turn from popular to un-popular and from un-popular back to popular is a mug’s game for as noted above, illogic can obtain for a very, very long while.

We have learned to listen to those who have in the past been the wisest for wisdom is a God-given talent and rarely is lost. The Wise of years past will likely remain the Wise of coming years. The Keyneses, Shillings, Wesburys, Kasses, Perrys, Tudor Joneses, Grants, Williamses, Coxes, and Buffetts et al were wise in the past and will be wise in the years ahead because they have all been battle tested and have survived.

We have learned that bad things happen far more quickly than do good things and that bear markets are far more severe and swift and terrifying than are bull markets. As the late economist, Rudiger Dornbusch, once so wisely said, “In economics, things take longer to happen than you think they will and then they happen faster than you thought they could.” This is especially true in the transmission from bullish to bear markets and from economic expansion to recession.

We have learned that economic news doesn’t matter until it matters and then it matters… a lot.

We have learned that friends mean a lot in the business of trading/investing… perhaps more than anything else and we acknowledge all of the men and women who’ve been friends over the years too many to mention but who shall not be forgotten [Ed. Note: Steve, you’re #1.].

Finally we have learned that we’ve been involved… and will remain involved… in the greatest of all businesses that allows us to match wits with geniuses on a daily basis. There is nothing quite like it, really. We count ourselves blessed and very, very lucky to have staked out a position in the capital markets and that we’ve perhaps even added a bit to the accumulated wisdom incumbent therein. And above all, we’ve been lucky to report to the greatest of all CEOs… our lovely bride of 30+ years, Margaret, who kept us focused when times were rough and even when times were great. We’ve been fortunate. Thanks to everyone! We mean that sincerely. THANKS TO EVERYONE!