Authored by John Mauldin via MauldinEconomics.com,

Ignoring problems rarely solves them. You need to deal with them – not just the effects, but the underlying causes, or else they usually get worse.

In the developed world and especially the US, and even in China, our economic challenges are rapidly approaching that point. Things that would have been easily fixed a decade ago, or even five years ago, will soon be unsolvable by conventional means.

Central bankers are the ones to blame. In a sense, they are far more powerful and dangerous than the elected ones.

Hint: It’s nowhere good. And when you combine it with the fiscal shenanigans, it’s far worse.

Fixing Their Own Mistakes

Walter Bagehot, one of the early editors of The Economist, wrote what came to be called Bagehot’s Dictum for central banks: As the lender of last resort, during a financial or liquidity crisis, the central bank should lend freely, at a high interest rate, on good securities.

The Federal Reserve came about as a theoretical antidote to even-worse occasional panics and bank failures. Clearly, it had a spotty record through 1945, as there were many mistakes made in the ‘20s and especially the ‘30s. The loose monetary policy coupled with fiscal incontinence of the ‘70s gave us an inflationary crisis.

Paul Volcker’s recent passing (RIP) reminds us of perhaps the Fed’s finest hour, stamping out the inflation that threatened the livelihood of millions. However, Volcker had to do that only because of past mistakes.

Beginning with Greenspan, we have now had 30+ years of ever-looser monetary policy accompanied by lower rates. This created a series of asset bubbles whose demises wreaked economic havoc.

Artificially low rates created the housing bubble, exacerbated by regulatory failure and reinforced by a morally bankrupt financial system. And with the system completely aflame, we asked the arsonist to put out the fire.

Yes, we did indeed need the Federal Reserve to provide liquidity during the initial crisis. But after that, the Fed kept rates too low for too long, reinforcing the wealth and income disparities and creating new bubbles we will have to deal with in the not-too-distant future.

This wasn’t a “beautiful deleveraging” as you call it. It was the ugly creation of bubbles and misallocation of capital. The Fed shouldn’t have blown these bubbles in the first place.

On the Way to Crisis

The simple conceit that 12 men and women sitting around the table can decide the most important price in the world (short-term interest rates) better than the market itself is beginning to wear thin.

Keeping rates too low for too long in the current cycle brought massive capital misallocation. It resulted in the financialization of a significant part of the business world, in the US and elsewhere.

The rules now reward management, not for generating revenue, but to drive up the price of the share price, thus making their options and stock grants more valuable.

Coordinated monetary policy is the problem, not the solution. And while I have little hope for change in that regard, I have no hope that monetary policy will rescue us from the next crisis. 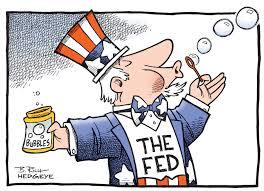 Let me amplify that last line: Not only is there no hope monetary policy will save us from the next crisis, it will help cause the next crisis. The process has already begun.

I predict an unprecedented crisis that will lead to the biggest wipeout of wealth in history. And most investors are completely unaware of the pressure building right now. Learn more here.

Surviving Tiananmen: The Price Of Dissent In China

What an Independent Britain Could Learn from Singapore