Authored by Ritesh Jain via WorldOutOfWhack.com,

The original song from Dirty Dancing is one of my all time favourites and somehow reminds me of the Global Markets performance this year.Every conceivable asset class (except cash) posted positive returns ,thanks to the LIQUIDITY provided by global central banks. The Fed, in my view, moved to implement the “ high pressure economy” regime outlined in former chair Janet Yellen’s 2014 speech at the Boston Fed Reserve bank.

Indirecly this document suggest the US central Bank has returned to the Greenspan approach to bubbles- they will deal with the consequences once it pops.

The chart below explains the LIQUIDITY story.

Gone are the good old days when Earnings used to be tailwind for market valuations. 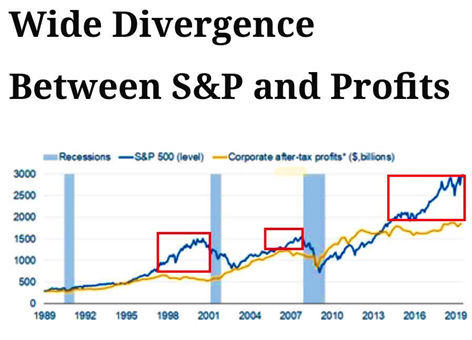 The polarising performance of US markets. 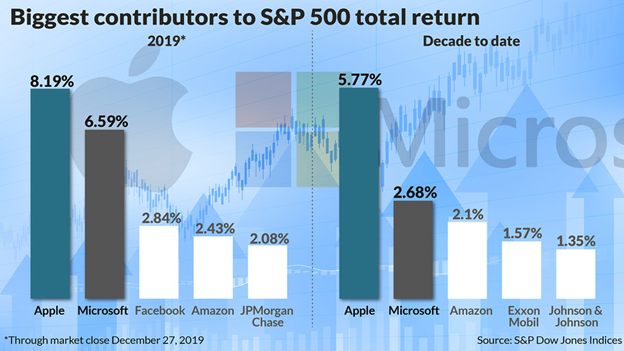 The two stocks, Apple and Microsoft, each having a market cap of USD 1 trillion have contributed the most to 2019’s total stock-market returns and also hold that position for the entire decade.

The number of Zombie companies continue to rise along with their market caps. 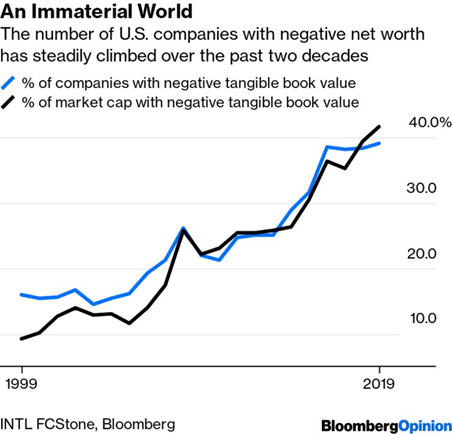 The above charts were examples of distortion created by excess pumping of money.

Jerome Powell raised the bar  for raising rates significantly whereas the bar for lowering rates has gone down. More evidence that Central Bankers will tolerate higher inflation and low or negative real rates.

BOFA has a crystal ball and they see the endgame approaching .

The global economy has entered a period called ‘slowbalization,’ which is the result of geopolitical shifts and secular trends that have slowed down globalization or, in some cases, completely reversed it. A global manufacturing recession was sparked by changes in consumer preferences that have roiled manufacturing hubs and complex supply chains in developed and emerging markets. Almost every major central bank across the world is easing at the moment in hopes of generating a mini-cycle trough to rebound growth in 2020.

(Ben Hunt via The Eplison Theory)

Neel Kashkari has just become the voting member of FOMC for the year 2020 and he wants to redistribute wealth in the society.

The farce is complete.

When markets run on nothing but multiple expansion the PEG ratio (price earnings growth) may just skyrocket higher. In this case: Through the historic roof. Don’t let anyone tell you this market is cheap. It’s not, it’s the most expensive in our lifetimes on a PEG basis.

US M2 growth y-o-y which was growing at 3.2% in November 2018, is now growing at 7.6% y-o-y. The economy is not growing rapidly enough to absorb this growth and the competition from the money and bond markets, domestically and overseas, is not compelling.

Money supply is expanding at above average rates and share growth is not. Consequently, share values are expanding — not likely to stop soon.

Sure, a lot of things could pop the bubble, if you think it’s a bubble. Inflation fears could do it, lots more of Treasury supply, etc. And the flows just keep on coming. High-yield spreads have dropped to historic lows and I give more credence to signals from credit spreads than equity markets.

But the inflection point in my view was the collapse of WeWork which changed the sentiment away from loss making enterprises in the hopes of dominating market share, to more efficient operations focused on at least attempting to generate profits. Second, the hike by the RiskBank this month to Zero is a sign that negative rates have lost their allure. I couldn’t help but put this photo of Germans standing in line at Cologne outside Degussa showroom to buy precious metals since their hard-earned money lying in bank deposits is now earning negative interest rates.

Finally, the Dollar index (DXY), which was in a rising trend for some time and was supported by a strong US GDP growth is in the process of rolling over and making lower highs and lower lows. Trump and Fed would be happy at this achievement but who knows what a falling dollar bring with it.

Overall, these developments would appear to support some whiff of reflation and higher inflationary expectations,

What are the possibilities regarding a potential “normalization of repo liquidity post-run? In the year 1999-2000 Fed had similarly flooded the system with massive liquidity to tide over Y2K related issues and when it went to withdraw that liquidity there was sharp negative reaction by stock market. I guess we will see the same towards the end of first quarter 2020. Emerging markets will be bid till the time Dollar index is soft. In terms of bonds, the prospect of less certain funding and higher deficits might also stifle some enthusiasm. Commodities could outperform stocks as a class.

What if the Fed finds that it can’t step back from repo operations due to fear of financial dislocations? In this case, stocks could see a more aggressive “melt-up” helped by tsunami of Fed liquidity, but the dollar will fall more, and GOLD will benefit.