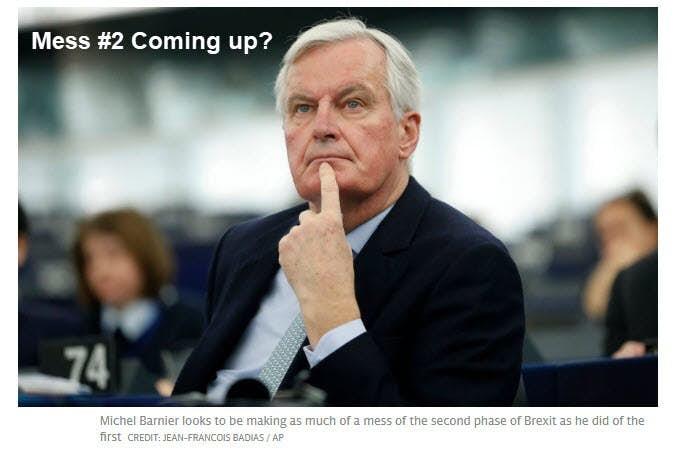 Revealing words from Michel Barnier in 2016, quoted in @LePoint. “I would have succeeded in my task if, in the end, the deal is so hard on the British that they’ll prefer staying in the EU.” https://t.co/G7aw0RAAjF pic.twitter.com/XNn22Aeqkc

“I would have succeeded in my task if, in the end, the deal is so hard on the British that they’ll prefer staying in the EU.”

Instead, Boris Johnson was elected in a landslide. Yet, Barnier still has his job. He remains the EU’s top negotiator for working out a comprehensive trade deal with the UK.

Matthew Lynn at the Telegraph says Barnier was a total failure in his role as chief Brexit negotiator, and we can expect the same on trade.

Over the last few weeks, Michel Barnier has been issuing a constant stream of demands, edicts and ultimatums over everything that Britain will have to agree to before it will be offered a trade deal with the European Union.

The demands are, by any measure, extraordinary. You or I might think a trade agreement between two geographically close entities, with complete regulatory alignment, was a fairly simply thing to agree. We allow the EU countries to sell pretty much whatever we feel like buying from them, subject to health and safety laws, exempt from any quotas and tariffs. And in exchange they do the same for us. Beyond that, there shouldn’t be a great deal to talk about.

To Barnier, however, it is something very different. The EU trades quite happily with China, or Vietnam, or Chile, regardless of how workers are treated, but it won’t be able to trade with Britain unless it has the right to control working hours, labour laws, tax and industrial policy.

The important point, however, is surely this. The EU seems intent on repeating the mistakes of the first phase of Brexit all over again.

In many ways that is typical of the EU’s failings. Nobody is elected, there is no oversight of the competence of officials, and no way of replacing them if they are not doing a good job. Barnier was appointed to the post of Brexit negotiator by Jean-Claude Juncker, and then kept on by his successor to work on the trade agreement, but there has been no review of how competent he has been, or whether his has successfully protected the EU’s strategic and economic interests.

Yes, Barnier failed. But how much of it was extraordinarily bad luck?

The critical points are actually one and two.

I called this right from the beginning, but I sure had Theresa May wrong. She clearly did not want to leave. If she had an ounce of brains she could have forced her horrid deal through.

Instead we had a fiasco of extension after extension. May made political mistake after mistake.

People blame bad luck when their analysis is wrong. They have a tendency to believe they are skilled when they get things right.

This is my opinion in retrospect: OK, I got this right, but perhaps I was lucky and Barnier was unlucky.

It really did take an amazing sequence of events.

But, that is what happens when you gamble.

I called it correct, but maybe I was lucky.

The EU screwed over Cameron. Had the EU tossed any kind of bone to prime minister Cameron, the referendum would not have passed.

Had Barnier not tried to completely screw the UK, a poor deal for the UK would have been the outcome.

Had May not been incompetent, there would have been a deal.

Barnier had the odds in his favor because he knew Theresa May was in his pocket. But instead of going for a sure thing, he put on the screws.

“The important point, however, is surely this. The EU seems intent on repeating the mistakes of the first phase of Brexit all over again.”

But I called this one long ago.

The EU Will Cave

Johnson will not give in on a fishing deal because he can’t. He needs that leverage over Scotland.

Similarly, Johnson cannot give in to ceding rights to the European Court of Justice, so he won’t.

The EU can either agree to a deal or not. Germany in particular is sweating blood.

So, I expect a deal or at least an agreement to make a deal. For WTO purposes, an agreement is sufficient. There is no need to work out all the details now.

If not, the EU is more screwed than the UK, my position all along.

Barnier was not bluffing before (he just took a calculated gamble that lost), but he is bluffing now.