While China does everything in its power do demonstrate that the number of new cases in both Hubei province where the coronavirus epicenter of Wuhan is located, and across China, is declining with every passing day in a sign that the epidemic is being ringfenced and is gradually coming under control – whether people on the ground actually believe the government which for at least the first three weeks of the breakout was lying and arresting anyone who spread facts about the deadly disease is a different matter entirely and will manifest itself in how quickly China can return to normal – attention has gradually moved to the spread of the virus offshore, where the number of new cases is starting to turn exponential.

As the chart below shows, after growing at a modest pace, the number of people infected outside of the mainland is now accelerating at an alarming pace. 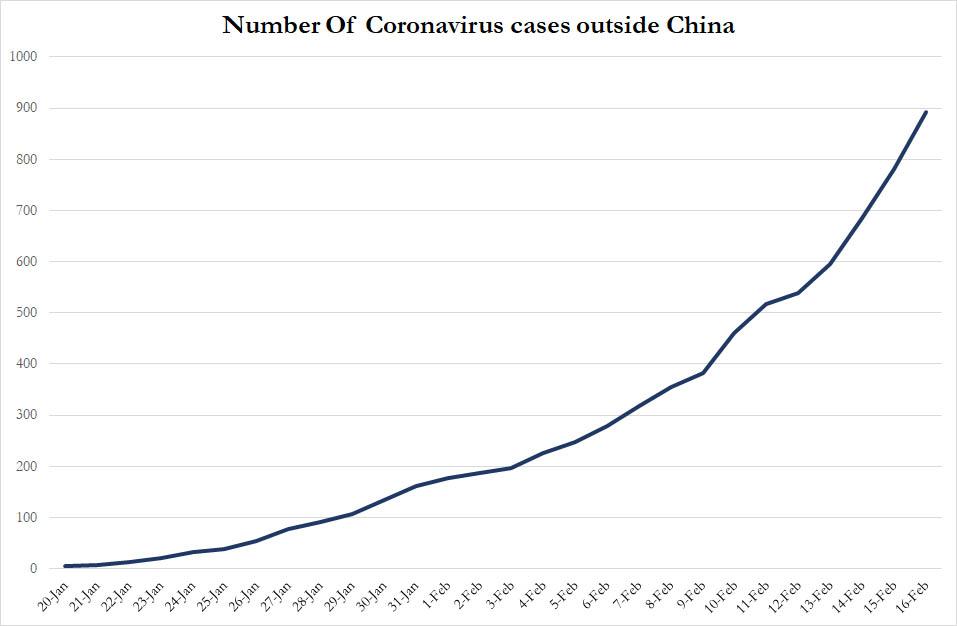 But one rather stunning fact when analyzing the offshore progression of the disease, is that there are now more cumulative coronavirus cases on just one cruise ship – the infamous Diamond Princess which has been quarantined in Japan for the past two weeks – then there are in all other localities outside of China (which begs the question just how many people are infected around the globe and have so far avoided detection). 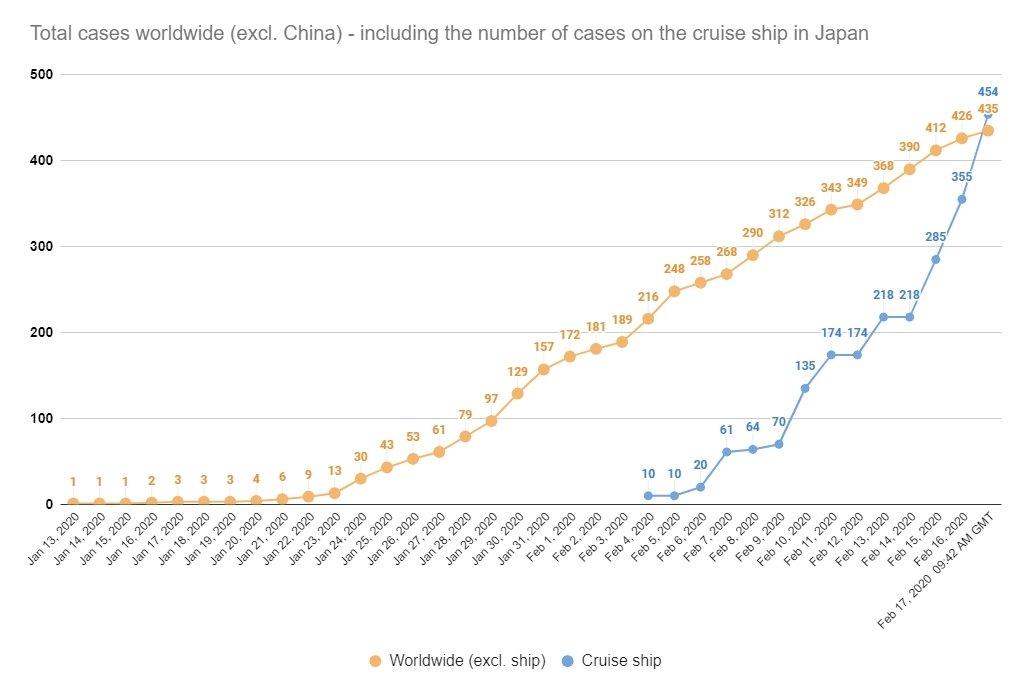 As a reminder, the Princess Cruises ship was carrying 2,666 guests and 1,045 crew when it set sail and was quarantined after 10 cases of coronavirus were reported Feb. 4. Since then the number of cases on board has exploded, and on Monday alone, Japan announced an additional 99 infections on the Diamond Princess, raising the ship’s total number of cases to 454. And since most of the people on the ship have yet to be tested, the real number of infections may not be known for days.

Where things gets problematic, is that whereas until now most of those on board the cruise ship had remained in isolation, the self-imposed quarantine is now over, and on Sunday, fourteen evacuees from the Diamond Princess were allowed to fly back to the United States Sunday despite testing positive for coronavirus, the U.S. State Department and Health and Human Services said in a joint statement. Why were they released? Because supposedly they were not symptomatic, and in a very ominous twist, they had tested negative initially!

“These individuals were moved in the most expeditious and safe manner to a specialized containment area on the evacuation aircraft to isolate them in accordance with standard protocols,” the statement, published Sunday, read.

The State Department was unaware the individuals had coronavirus when they were being removed from the ship; they had tested negative just a few days before, Robert Kadlec, the assistant secretary for preparedness and response at the U.S. Department of Health & Human Services, said on a phone call with reporters.

“If those results had come back four hours earlier before we’d started to disembark the ship and before these people were evacuees within an evacuation system, then it would’ve been a different discussion.” Dr. William Walters, director of operational medicine at the U.S. Department of State, said on the call.

In other words, the quarantine that had isolated the biggest incubator of coronavirus cases outside of Wuhan was broken simply because an initial test had given a false negative, and subsequents test confirmed that at least 14 indeed had the coronavirus.

Kadlec said that individuals received multiple screenings when moving from ship to bus to plane and a more extensive medical assessment upon arrival.

The California flight had 177 people on it, seven of whom tested positive for coronavirus, Walters said. An additional three people were isolated during the flight for fever. Upon arrival, 171 stayed in Travis while six traveled to Omaha.

How did all those Americans who were flying alongside the infected feel? Well, according to USA Today, “the aircraft design allowed passengers to sit in isolation thanks to a plastic divider at the tail of the aircraft.”  We can only hope that “plastic divider” was enough to keep the virus confined to its own class aboard the aircraft.

Anyway, now that hundreds of passengers were locked up in that ship for almost two weeks for nothing with the US rushing to break quarantine without waiting to verify the initial “all clear” test, officials from the University of Nebraska Medical Center and Nebraska Medicine confirmed that they are assessing 13 adults at their quarantine and biocontainment facility in Omaha.

“Late last night at about 2 or 3 a.m., we were asked to bring some individuals here who had either tested positive or had a high likelihood of testing positive because of symptoms they were exhibiting,” said Dr. Chris Kratochvil, the executive director at the University of Nebraska Medical Center’s Global Center for Health Security.

Twelve of them are housed in the quarantine center while one man was transferred to the hospital’s biocontainment unit for testing and observation because of symptoms including cough, fever, shortness of breath, lightheadedness and an undisclosed chronic condition that would make him particularly vulnerable to the COVID-19 virus, the USA Today reported.

“He is doing good and in stable condition at this time,” reported Shelly Schwedhelm, Nebraska Medicine’s executive director of emergency management and biopreparedness. She went on to note that “the folks in the quarantine center have all been tested, and we’re waiting for those results.” She added that the other 12 are isolated in “very nice rooms with WiFi, TV and a small refrigerator – a lot of the amenities at hotels but with engineering controls” to prevent contaminated air from escaping.

Their test results, which are due back any moment (Monday afternoon), will determine whether the patients will be allowed to see their spouses or leave their rooms. Regardless of whether they test positive or negative, all of the new arrivals will spend at least 14 days in the facility, and any who test positive will likely stay longer, said Dr. Mike Wadman, the co-medical director of the National Quarantine Unit without a trace of irony.

Kratochvil says it’s possible that they may be asked to take more patients should more of the Diamond Princess passengers now in quarantine at the airbases test positive.

Dr. Anthony Fauci, director of the National Institute of Allergy and Infectious Diseases at the National Institutes of Health, told the USA TODAY editorial board and reporters Monday that the original idea to keep people safely quarantined on the ship wasn’t unreasonable. Yet where the entire story falls on its face is that even with the quarantine process on the ship, virus transmission still occurred. One can only hope that there are proper precaution pathways in place to prevent transmission now that at least 13 infected cruise passengers are now on US soil.

What might have gotten awry is that the virus is airborne and spread via the air conditioning system. But before we get banned from another social network, we will wait for someone “more credible” to make that claim.

Unfortunately, since the Diamond Princess was the single biggest incubator of coronavirus cases outside of Wuhan, and since nobody still seems to have a full grasp on how to contain the infection, we have a nagging feeling that this breach of quarantine will come back to haunt the US.

Separately, Holland America said that 255 passengers and 747 crew members remained on the MS Westerdam, which docked in Sihanoukville, Cambodia, Friday, after being turned away from ports in Japan, Thailand and Guam. One female American passenger tested positive for coronavirus at a Malaysian hospital over the weekend. She remains stable, and her travel companion tested negative, the cruise line said.

It was unclear if quarantine on that cruise ship had also been broken, as the cruise line stated that at least some passengers had been transported to a local hotel: the cruise line said Cambodian health officials tested those on board Monday, a process expected to last several more days.

“Guests at a hotel in Phnom Penh have all completed the COVID-19 screening,” the cruise line said. “Results are being returned when completed, with the first batch of 406 all being negative. Cleared guests may travel home, and arrangements are being made for those guests. Guests in both locations are being very well cared for, including assisting with any medications needed.”

Finally, some good news: in keeping with its daily attempts to minimize the threat from the coronavirus pandemic, JPMorgan’s inhouse virologist insurance strategist said that even as attention shifts to cases outside of China, “at
this stage, we see the virus contagion risk remaining relatively small, considering hospital capacity and strong local efforts to minimize the outbreak.” Yet even here, the bank sounded decidedly uncertain of its cheerful prediction (this is the same bank whose credibility was shattered last week when China unexpectedly hiked the total number of cases by 15,000 in one day, crushing JPMorgan’s “epidemiological model”), to wit:

Mapping the virus spread scenario outside China. Our epidemiology model forecasts the virus outbreak in mainland China. However, we are observing early signs of community spread, as local infected toll without travel history to China is growing in Singapore, Japan, South Korea, and a few European countries. We intend to add mini-epidemic scenarios for each country once the infected toll exceeds the 100-200 level (depending on population/density).

The following table from JPM lists the number of international cases, excluding the 454 infected on the Diamond Princess, and excluding the 60 cases reported in Hong Kong. 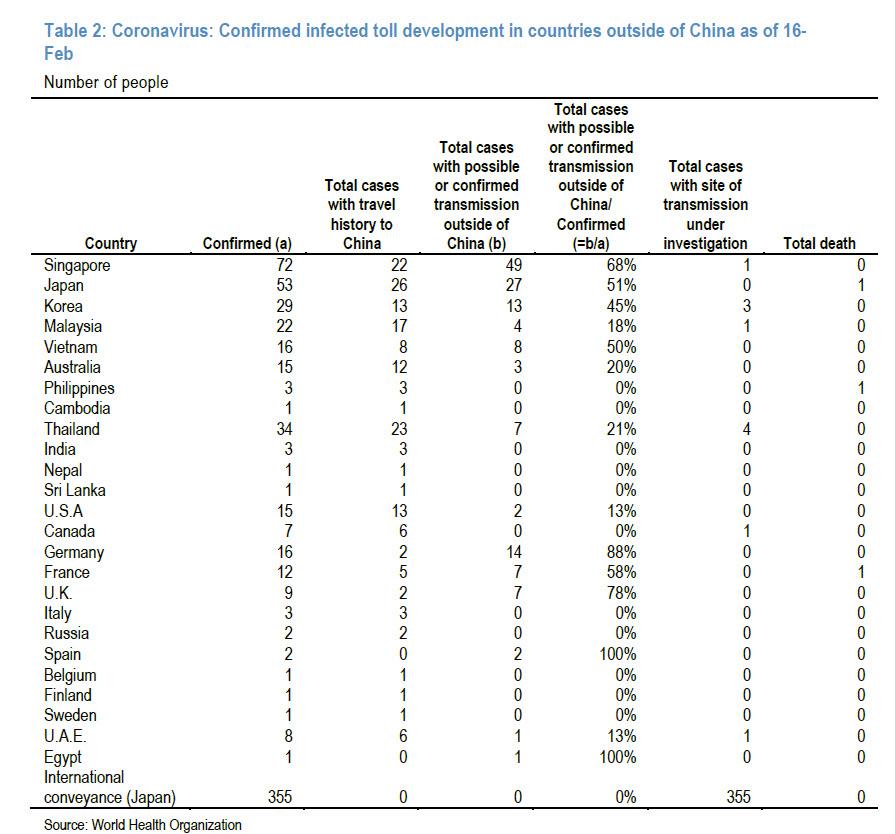