Banks around the world are supposed to benefit the most from central banks inflating assets, and hyperinflating stock markets, but over the past few years, central banks have instead caused some of the biggest bank job cuts in half a decade.

HSBC, Europe’s largest bank and troubled lender, although not nearly as troubled as Deutsche Bank, said it would cut upwards of 35,000 jobs, shed $100 billion in assets, and take a massive $7.3 billion hit to goodwill as part of a major overhaul under Chairman Mark Tucker, the company said in a press release on Tuesday morning.

This comes months after HSBC’s interim CEO Noel Quinn unveiled plans to “remodel” large parts of the bank. The restructuring of the London-based bank is being led by Quinn, who replaced John Flint in August on an interim basis. Quinn is vying for the permanent role of CEO, which the bank said will be decided this year.

Europe’s biggest bank by assets is expected to focus more on Asia and the Middle East, while it winds down operations in Europe and the US; HSBC derives at least 50% of its revenue in Asia. The bank said net profit plunged 53% to $5.97 billion last year, due to the $7.3BN goodwill hit and also thanks to the record low interest rates and NIRP unleashed by central banks.

Tucker said the bank faces substantial challenges in the UK, Hong Kong, and mainland China. He also issued a warning over the Covid-19 outbreak in China and quickly spreading across Asia to Europe, indicating that the virus could impact the bank’s performance this year.

Quinn confirmed the bank would cut 15% of its workforce over the next two-three years. This is on top of the 10,000 jobs it axed in Oct.

“The totality of this program is that our headcount is likely to go from 235,000 to closer to 200,000 over the next three years,” Quinn told Reuters. adding that “HSBC will be “exiting businesses where necessary.”

“Around 30% of our capital is currently allocated to businesses that are delivering returns below their cost of equity, largely in global banking and markets in Europe and the U.S.,” he noted.

In its long-struggling U.S. arm, Quinn said HSBC will cut assets in investment banking and markets by almost half, and shut around 70 of its 229 branches. As of September, HSBC was the U.S.’s 14th largest commercial bank according to Federal Reserve data, with around $181 billion assets. Mr. Quinn said he had considered putting the unit up for sale but decided against it because the U.S. is a crucial part of the bank’s global network.

HSBC shares slid 6% on the restructuring news on Tuesday morning:

The benefits of the restructuring will be evident largely from 2023 onward, said Citigroup analyst Ronit Ghose, who recommended investors sell HSBC shares. 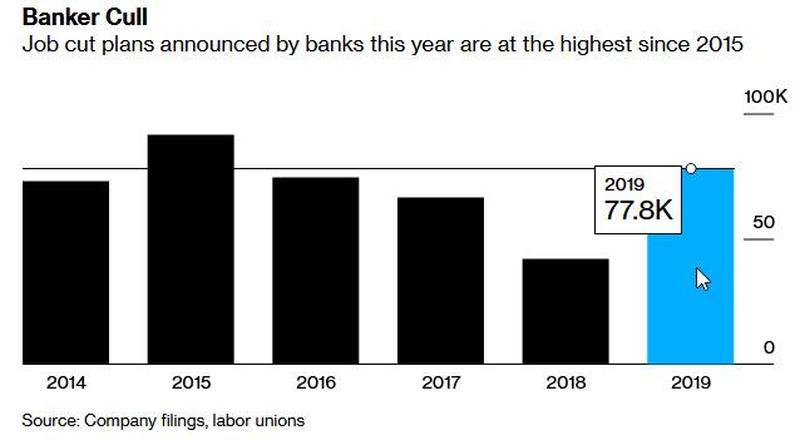 With the global economy quickly decelerating, and a virus shock that could tilt the world into recession, if we had to guess, tens of thousands of more banking jobs will be slashed this year.