The Angels Are Falling: Macy’s Downgraded To Junk; Stock Tumbles

The Angels Are Falling: Macy’s Downgraded To Junk; Stock Tumbles

More than two years after Horseman Capital first suggested shorting BBB names on the expectation that a coming recession would lead to an avalanche of “fallen angels”, or ‘just barely’ investment grade names being downgraded to junk, resulting in a major hit to the high yield sector which, sized just over $1 trillion would not be able to absorb the roughly $3 trillion in BBB-rated credits without a corporate bond market crisis, the thesis is starting to play out, and one week after Fitch and S&P downgraded consumer products giant to junk, or from BBB- to BB+, sending a “gargantuan” amount of debt to junk, moments ago S&P downgraded another investment grade staple, Macy’s, to junk, when it cut its rating from BBB- to BB+, due to what S&P said was “considerable execution risks as the company attempts to improve its position in the challenging department store sector.”

The S&P downgrade is below:

S&P Global Ratings today took the rating actions listed above. The downgrade reflects our view that Macy’s improvement trajectory is weaker than our prior expectations and execution risks are elevated as the company pursues its Polaris strategic plan against an ongoing difficult industry backdrop. Macy’s faces unique challenges among the large national department stores. A long history of acquisitions and expansion has saddled it with excess stores as shoppers’ shifting preferences move away from mall-based locations and toward more value oriented offerings. While we believe management’s strategic plan is a necessary step toward rightsizing the enterprise, it demonstrates to us that the company’s competitive advantage has diminished more than we expected, and to a point that we no longer believe is consistent with an investment-grade rating. We now project operating performance will deteriorate over the next several quarters, with declines in comparable same-store sales. However, we recognize the company’s ability to manage credit metrics by reducing debt with still good free cash flow generation, supplemented by asset-sale proceeds.

The stable outlook reflects our view that cost-savings initiatives should offset sales declines, contributing to S&P adjusted EBITDA margins of slightly above 10% for Macy’s in 2020. We expect the company to maintain leverage of 3x or lower in the next year and believe it will continue to reduce debt using free cash flow and the proceeds of asset sales.

We could lower the rating if Macy’s is unable to track reasonably close to its Polaris plan, or the decline in revenues is greater than we expect because of secular headwinds and competitive pressures. That would lead us to believe that business stabilization is more difficult than anticipated, resulting in larger sales declines and margin erosion. We could also lower the rating if we expect leverage to be sustained above 3x.

We view an upgrade as unlikely over the next year because we believe the new strategy will take several years to implement and bear fruit. In the longer term, we could consider raising the ratings if we believe Macy’s performance has stabilized and the company is on a path to generate consistently positive same-store sales growth and margin improvement, while keeping leverage below 3x.

One look at Macy’s net leverage in recent years suggests that it is far more likely that the next leverage bracket for the company will be 3x (thus resulting in another downgrade) rather than an improvement to 1x or better. 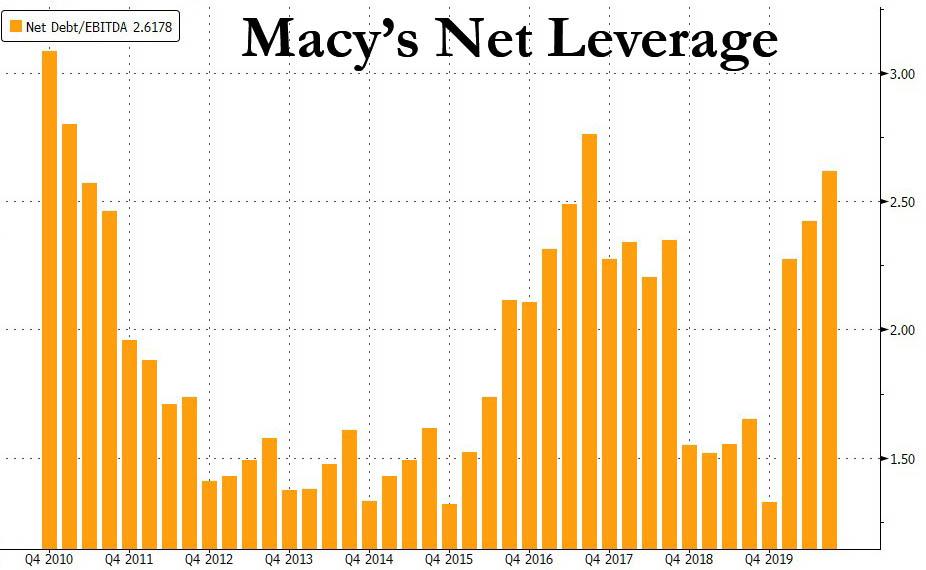 And to think that after repurchasing billions in stock between 2011 and 2016, the company saw the surge in leverage without even buying back its own shares. 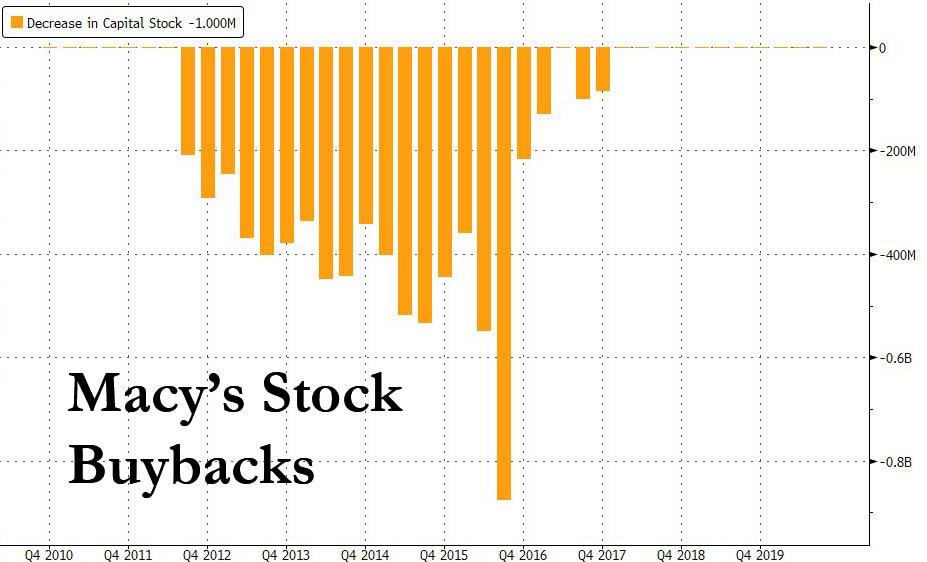 In any case, now that buybacks are out of the question for the newly junked Macy’s, investors are bailing with the stock down more than 4%, especially since any future capital raises and debt refis will require a far higher coupon and result in even more value being pulled away from equity.

And speaking of future debt maturities and rollovers, there sure will be a lot of those with Macy’s net debt now the highest it has been since the financial crisis. 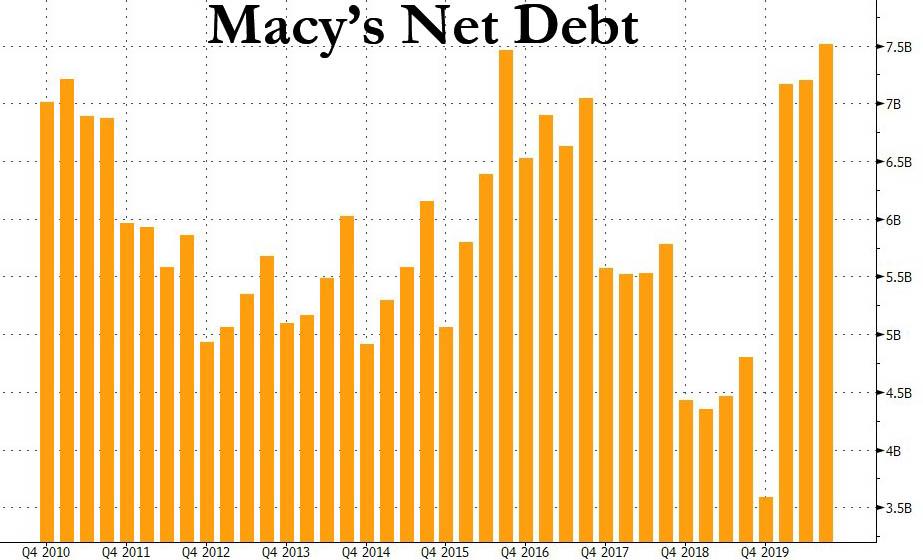