So much can change in one month.

Back in January, when following a brief burst of reflationary euphoria Bank of America conducted its first Fund Manager Survey for the decade, it found a burst in optimism and investor euphoria, with concerns about a recession a distant memory as professional investors – unable to grasp that the market surge was entirely on the back of the Fed’s QE4 and nothing to do with actual economic growth – turned irrationally exuberant on growth.

It did not last long: just one month later, in the latest just released survey of 221 panelists who collectively manage $676BN in AUM, the mood has turned sharply lower as global growth expectations fell to just net 18% of investors surveyed believing the global economy will improve in the next 12 months (48% of respondents expect stronger growth vs. 29% expecting weaker growth) down from net 36% in January if still well above 2019 lows. 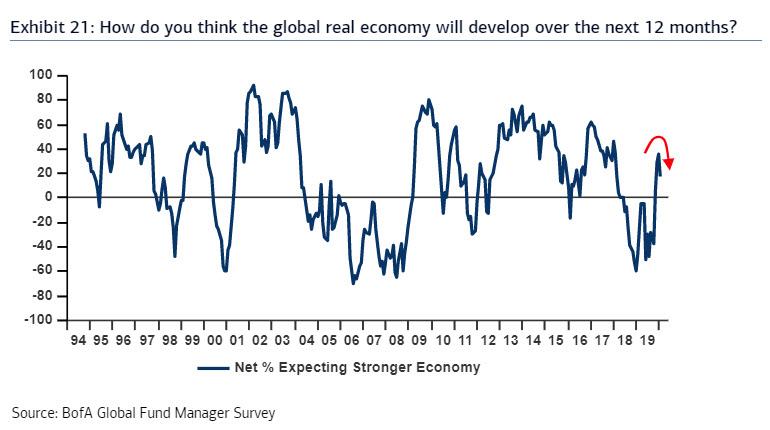 A big reason for the dour mood was rising COVID-19 fears, notably around Chinese growth, which led to the first cut in FMS global growth, global profits & global inflation expectations since Oct’19. 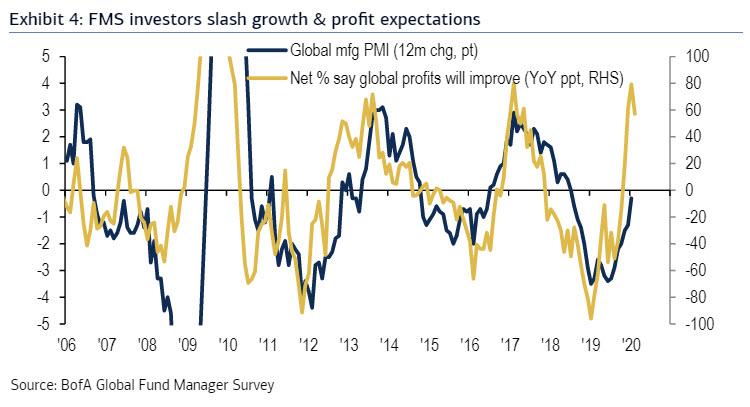 FMS investors also slashed their expectations for inflation 17ppt with only net 40% expecting higher global CPI in the next year; when asked what would increase inflation expectations, 26% of those surveyed said Modern Monetary Theory – also known as helicopter money and which is inevitably coming at some point, the only question is when – while 24% selected a G7 commitment to infrastructure spending.

In the same vein, 67% of investors surveyed expect below-trend growth and inflation over the next year, up 5ppt from January.

And with the brief renaissance of value stocks that lasted for all of a few weeks last September now a distant memory, Wall Street once again expects growth stocks to outperform value stocks over the next 12 months, according to net 6% of investors surveyed; this marks the biggest jump in favor of growth since December 2014 and the highest overall reading since July 2008. So much for JPMorgan’s “once in a decade” opportunity to buy value stocks. 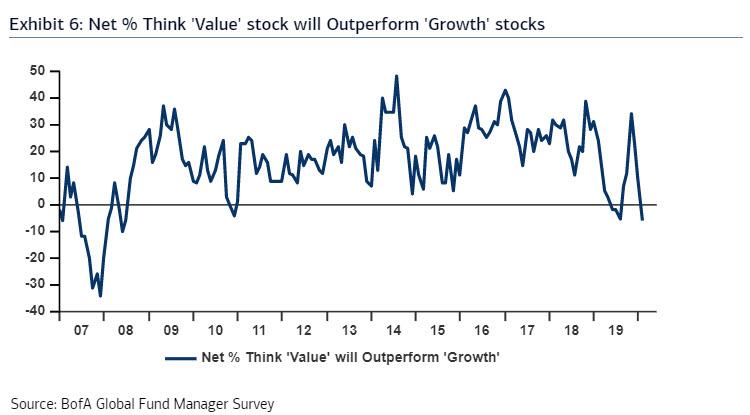 As a result of this reversal in sentiment, inflationary trades have once again been cast aside, and amid the combo of tepid macro, the spread of the COVID-19 virus, oil plunge offset by QE-forever consensus, BofA’s chief equity strategist Michael Hartnett sees a full capitulation into “deflation assets”, with the most “crowded trade” once again long US tech/growth stocks to an even greater extent than in January … 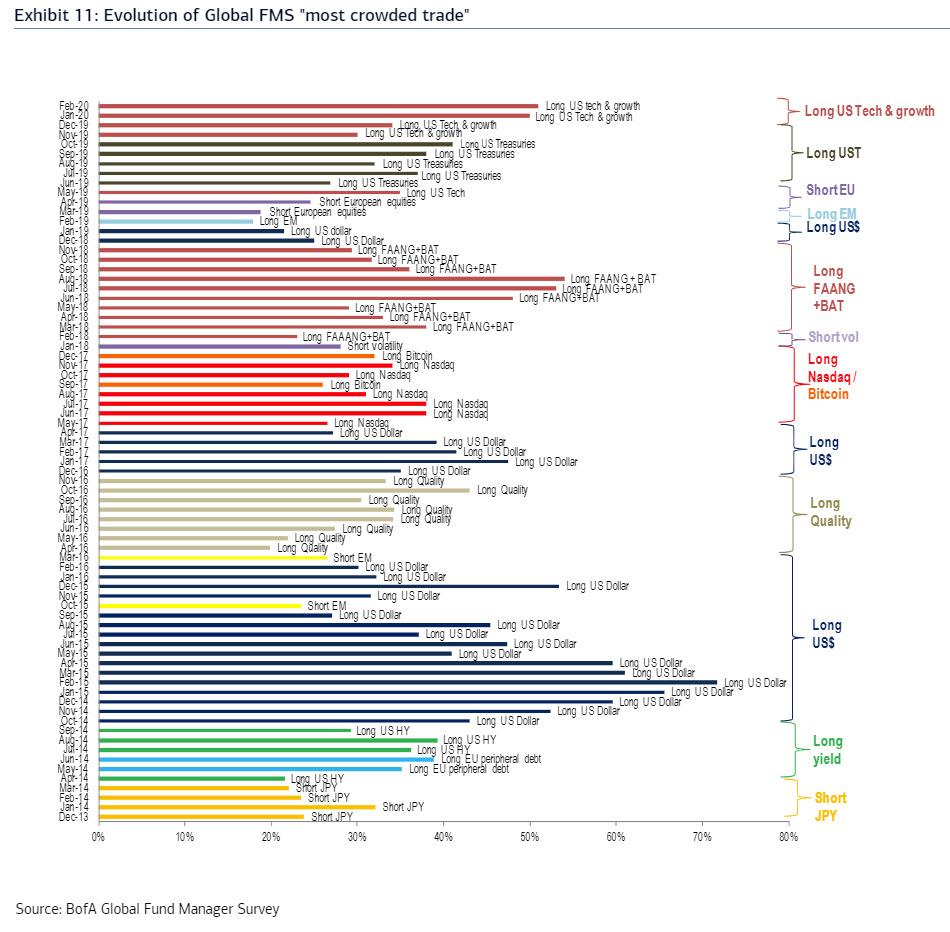 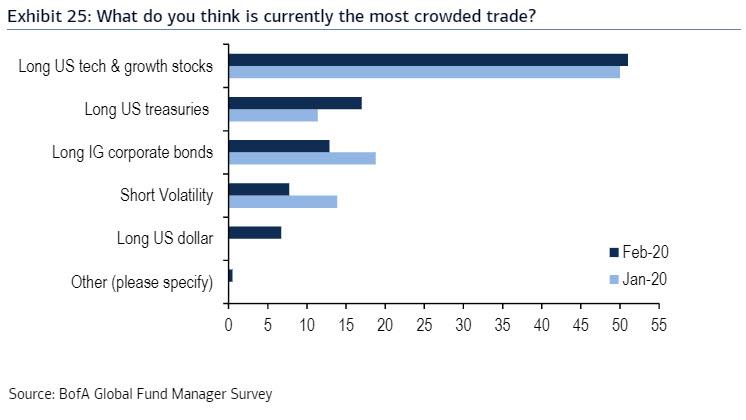 … while positioning and flows saw a big Feb rotation into US stocks (especially tech), bonds and EM, out of banks, energy, value… 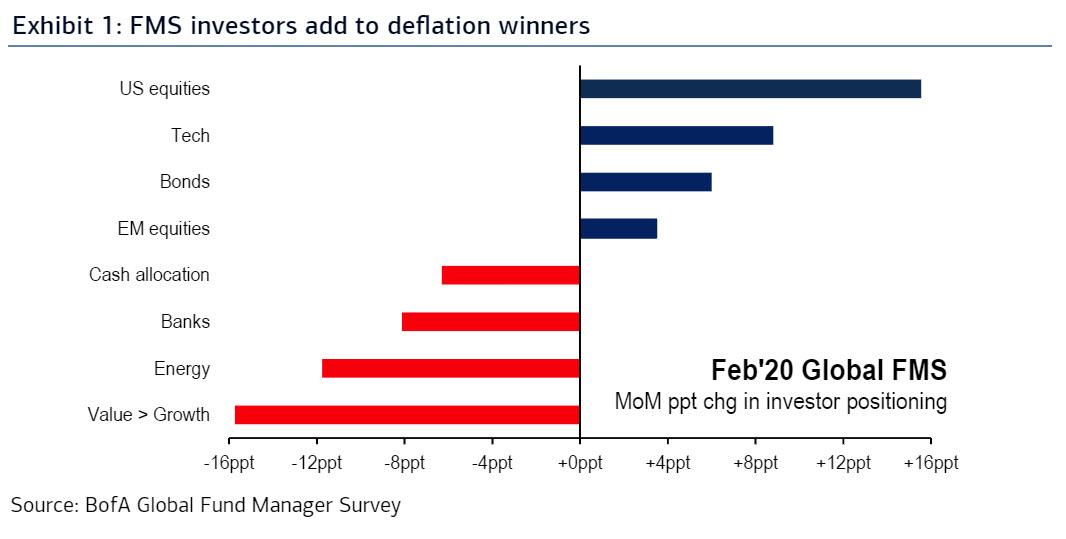 … and highest expectations of growth sectors to outperform value since July’08. 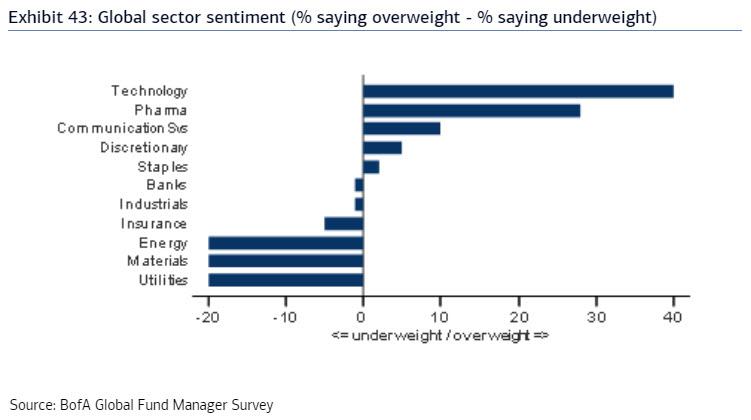 As one would expect, Wall Street investors cut their long-term rate expectations this month, substantiaing their conviction in owning deflation winners. 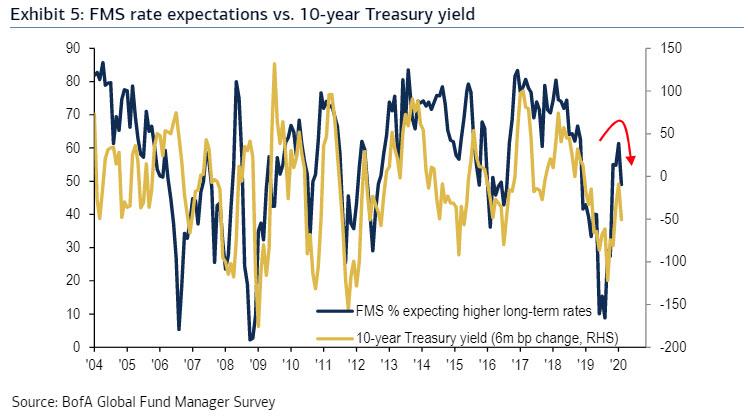 Looking at sectors, allocation to technology rose 9% to net 40% overweight, the highest level since October 2016, with Tech sector allocation the highest among FMS investors. 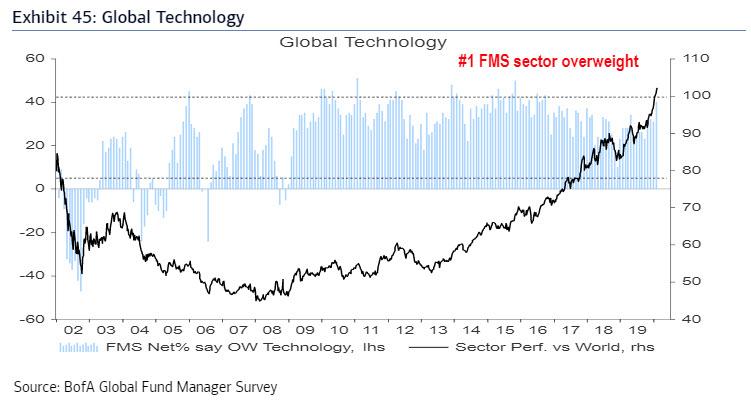 What about regions? Here allocation to emerging markets equities rises 3% to net 36% overweight, the highest since March 2019, making EM equities the most preferred region for the fourth consecutive month. 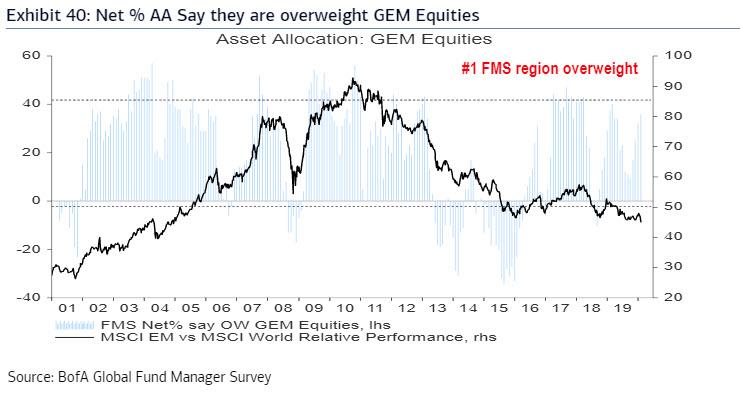 As for currencies, a net 54% of those surveyed say the US dollar is overvalued, the second highest level since 2002… which is ironic with the dollar continuing to surge (at least against other fiat currencies, if not so much gold). 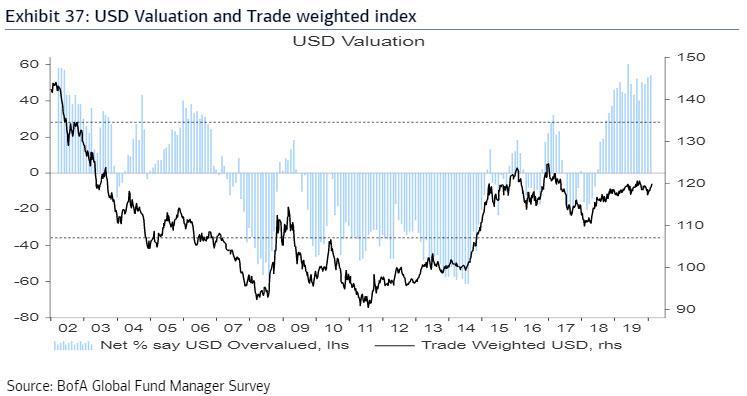 Hartnett’s “irrational bullishness” is hardly unique, because despite this deflationary capitulation, allocations to global equities rose by 1 percentage point to net 33% overweight, a 20-month high, as US equity allocation rose 16ppt to net 19% overweight, the highest since Sept. 2018. 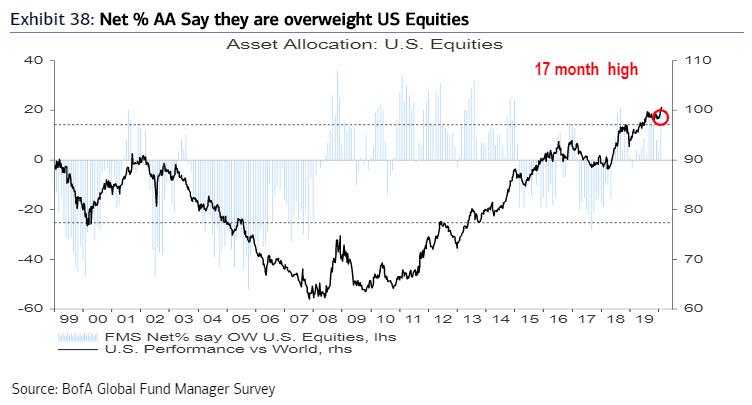 So can anything ever break markets out of their infatuation with deflationary assets? Yes: one thing – helicopter money. According to FMS respondents, MMT (Modern Monetary Theory, aka Magic Money Tree) is most likely to increase global inflation expectations (26%), followed by G7 infrastructure spending plan (24%) & “election of progressive liberal” as US president (18%). These are also the three biggest risks to the longest “bull market” of all time: 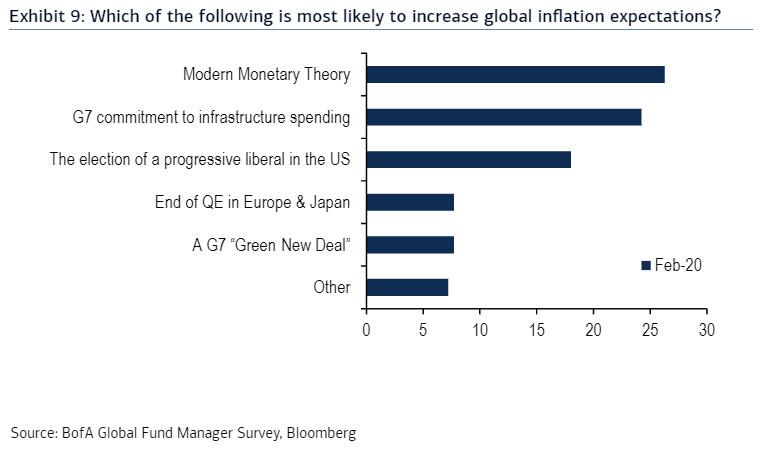 Hilariously, it is now the end of QE in Europe and Japan that markets believe will push inflation expectations higher. Which means that central banks have totally failed in their mission which is to stimulate inflation through monetary intervention, and in reality every central bank stimulus is now deflationary. We doubt anyone in the mainstream economic profession will touch this stunning observation with a ten foot pole.