JSW Steel had nothing but praise for Trump’s steel tariffs. Now the company has filed a lawsuit against the Trump admin. 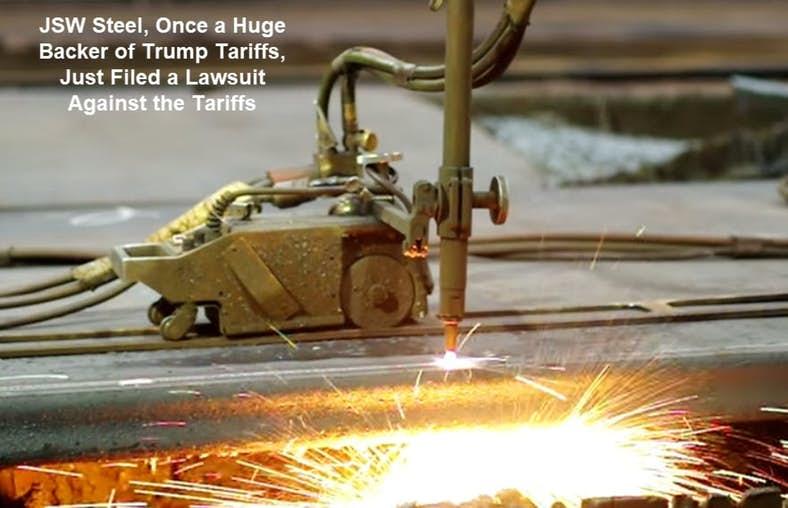 I Told You So!

Trump had a plan to Make America Steel Great Again.

Let’s check in and see how well Trump’s plan worked out for American producer JSW Steel.

The irony in this sad story is JSW Steel Praised Trump’s Tariffs.

John Hritz, president and chief executive officer of JSW Steel USA Inc., put on a big smile and a Texas flag pin for his television spot on Fox Business in March 2018. “It’s a special day,” he told his host, then told her again: “It’s a special day.” JSW Steel’s India-based parent company, JSW Group, had announced it would invest $500 million and create 500 jobs at its steel mill in Baytown, Texas. “We’re going to make history,” Hritz said.

Hritz was counting on help from President Trump, who three weeks earlier had announced his intention to impose tariffs of 25% on steel and 10% on aluminum imported to the U.S. The Fox anchor wondered if the import levies might interfere with JSW’s Baytown plan, given that much of the raw steel processed at the mill was imported from India and Mexico. “Absolutely not,” Hritz said. On the tariffs, JSW was “in lockstep with the president and with the administration.”

Not so much anymore. A big piece of the Baytown project has been postponed indefinitely, in part because of Trump’s tariffs. Both Baytown and a sister plant in Ohio, where JSW once planned to invest another $500 million, have been operating at unprofitably low production levels, also owing in part to the tariffs. JSW has sued the administration for refusing to exempt it from paying the levies on the massive slabs of steel the company imports and turns into pipe and other products for industrial use. “It’s the hypocritical nature of these tariffs that’s completely dumbfounding us,” says Parth Jindal, director of JSW Steel USA and managing director of JSW Cement Ltd. in India. “It just doesn’t add up.”

Other steel processors are in a position similar to JSW’s, paying tariffs on raw steel they say they can’t procure here. NLMK, the U.S. arm of Russia’s Novolipetsk Steel PJSC, has had rolling layoffs at a plant in Pennsylvania because it’s been paying tariffs on slab from Russia—$184 million and counting, says Robert Miller, NLMK’s U.S. CEO and president. “That frustrates me because now you’ve affected people’s families,” he says. “We’re an American company with American workers represented by American unions. That’s what sucks.”

The department was unprepared for the flood of requests it got for exclusions. It had estimated there would be 4,500 petitions for tariff relief. By early 2019 it had more than 50,000 from steel and aluminum makers, as well as from manu­facturers of furnaces, razor blades, automobiles, and other metal goods, according to an analysis by the Mercatus Center, a research think tank at George Mason University. As of late January, steel claims alone had risen to more than 141,000, with almost 75,000 granted, 22,000 denied, and 27,000 rejected for filing errors, according to the Commerce Department.

JSW filed six exclusion requests for imports from India in April 2018, followed by another six for Mexican imports that June. JSW told Commerce it couldn’t rely on “direct competitors” in the U.S. to supply its slab. Echoing the department’s 2001 analysis, JSW said that the material it needed simply wasn’t available in the quantities and specifications it required and that, furthermore, competitors had no incentive to sell JSW slab that they could process and sell themselves at a higher markup.

Another Idea Down the Drain

The amazing thing about all of this is Hritz is still a Trump tariff backer.

But that does not matter.

What does matter is many of those those laid off workers likely feel quite a bit differently. So does anyone with an ounce of common sense.

A recession was long overdue anyway. But Trump’s inane trade policy coupled with the coronavirus will seal the fate.

Japan and Germany are already in recession.

A few days ago, I commented Japan Isn’t Headed for Recession, It’s In Recession

Please note that Half the Population of China, 760 Million, Now Locked Down

That alone would trigger a recession. The US will not be immune to a slowdown in China, Japan, and Germany.