In the US, gift cards are widely seen as a way to give somebody a gift that’s ever-so-slightly more thoughtful than simply giving them an envelope full of cash. They’re also increasingly an option for consumers to redeem credit card rewards. Unfortunately, many American adults also misplace or forget about the plastic gifts, essentially handing the seller free money.

Over the past couple of decades, American companies have pushed gift cards because of the tremendous benefit they provide to a company’s bottom line. Not only are they essentially an interest-free loan, but since a percentage of gift cards typically aren’t ever redeemed before they expire, companies can pocket the difference.

How big is the difference, exactly? Well, it’s probably larger than most Americans would expect. According to a recent survey by BankRate, right now, American adults have some $20 billion in unused gift cards or store credit just sitting there.

One of the analysts who worked on the report said adults hoping to form good personal finance habits should be to make sure that if they aren’t going to use a gift card, they either trade it in or sell it to a friend or acquaintance.

“Gift cards and store credits are real money, so treat them as such,” said Ted Rossman, industry analyst at Bankrate.

According to a survey that BankRate conducted along with its research, 25% of American adults have let a gift card expire, and 22% have lost a gift card. More than half have held onto an unused gift card or store credit for more than a year. 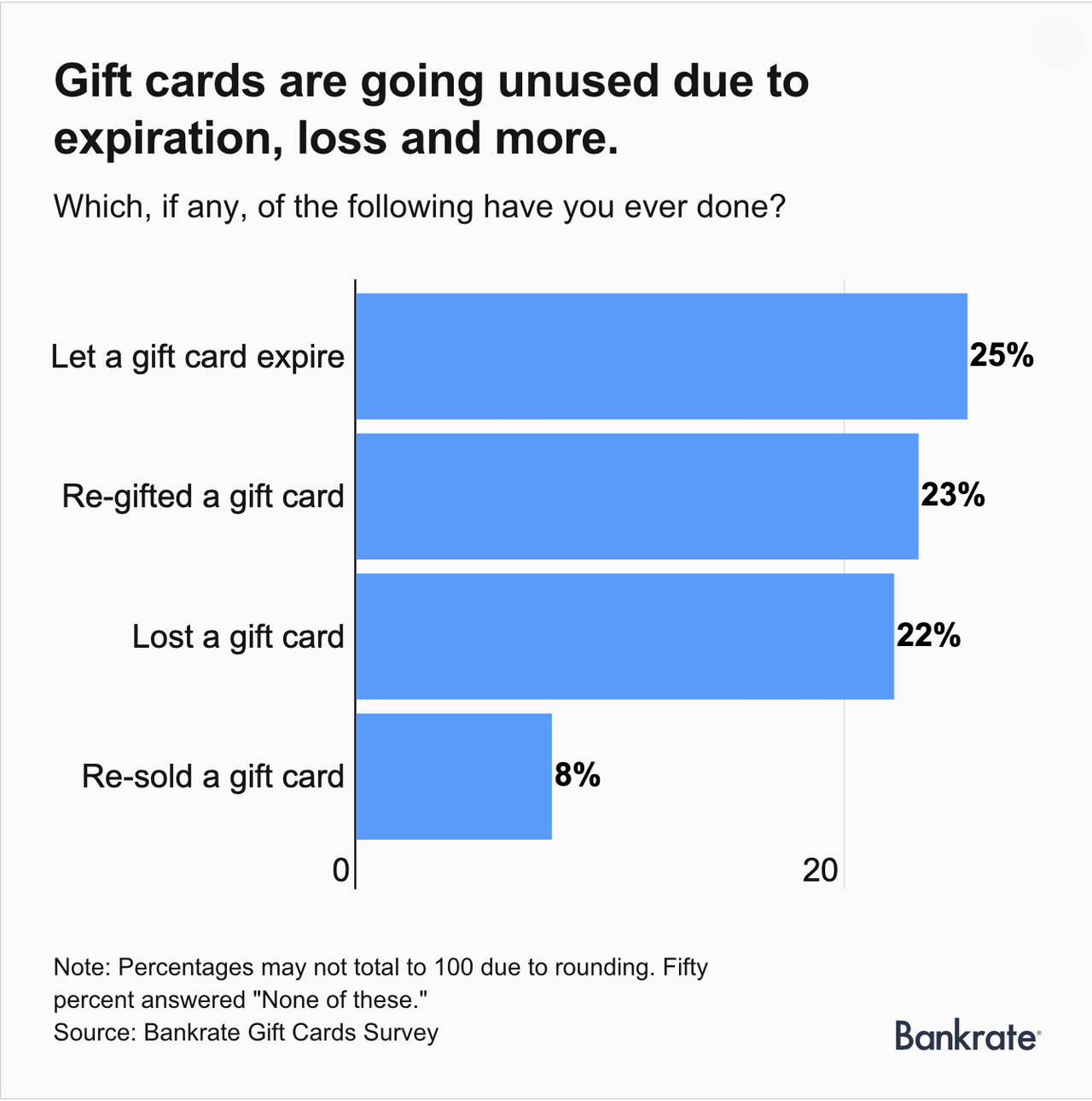 The average value per unused gift card is $167. 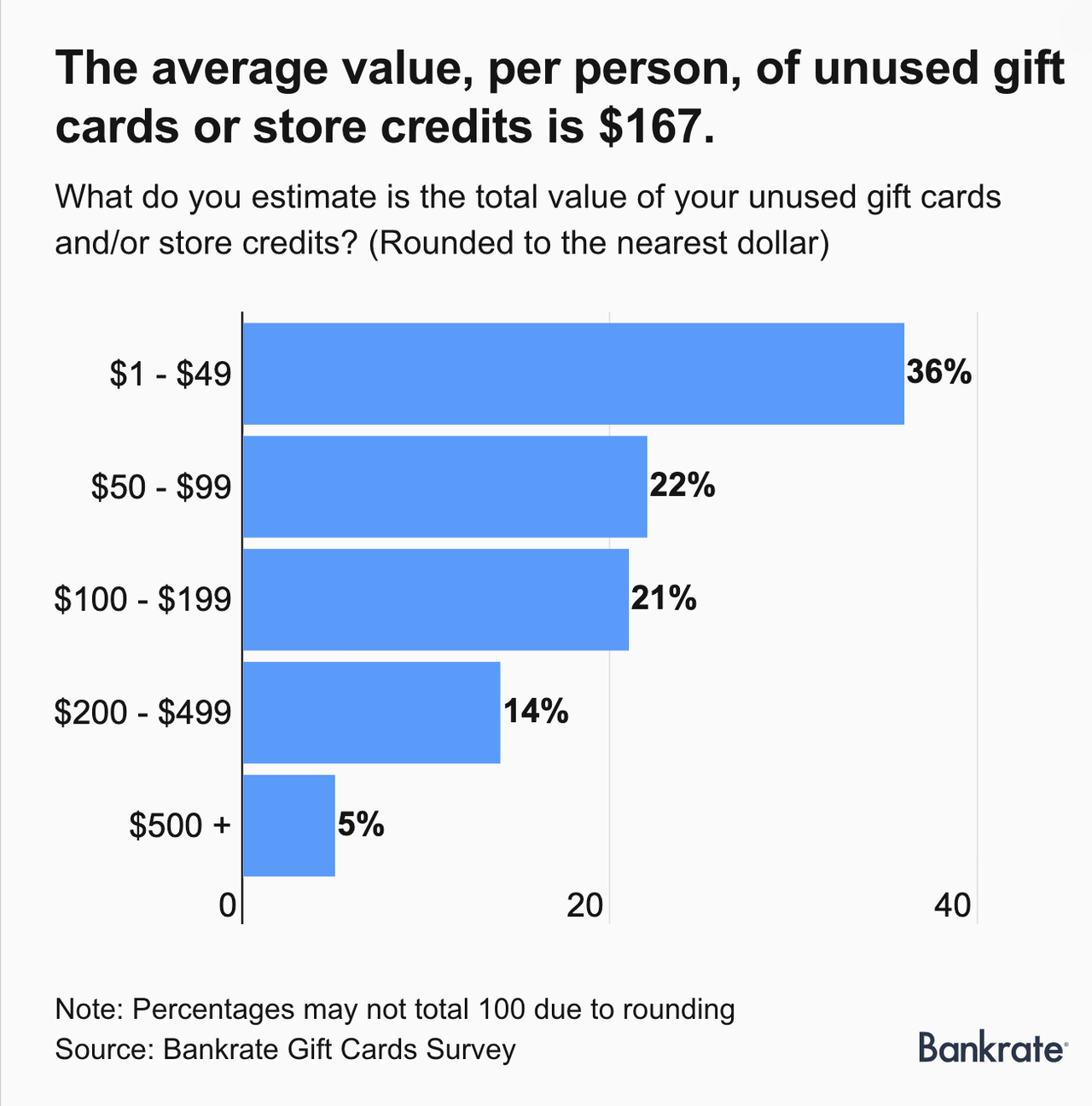 Often, this is the result of forgetfulness rather than intent, because most American adults surveyed (64%) told Bankrate that they expect to use their gift cards eventually. Only one-third acknowledge that they won’t use all of their gift card balance before they expire.

If you, dear reader, happen to fall into this latter camp, there are other options that can at least help you recover some of the value from the gift card, as one financial planner explains. These include selling your cards in the secondary market, or simply donating them to charity.

“Gift cards don’t take up much space in a drawer, but that doesn’t mean you should let them sit forever,” says Charles H. Thomas III, financial planner and founder of Intrepid Eagle Finance.

If you have unused gift cards collecting dust in your wallet, consider turning to the resale market. According to the survey, 23 percent of U.S. adults have regifted a gift card and 8 percent have resold a gift card.

“You can sell unwanted gift cards at sites such as Cardpool.com, CardCash.com and GiftCardSpread.com,” Rossman says. “You can also buy discounted gift cards from these sites. That’s a great way to save on an upcoming purchase.”

Rossman also suggests reading up on each site’s consumer protections. Cardpool, for example, offers a one year purchase guarantee on resold gift cards. Your gift card will be valid for up to 12 months, and if you don’t use the entire balance, you can contact Cardpool for a refund (up to $1,000 per customer per lifetime).

“Your local charity of choice or a website like GiftCards4Change will be glad to accept your unwanted card,” Thomas says. “You also have the potential for a charitable tax deduction when you do this as well.”

To sum up: Before giving your friend that gift card to Costco or Starbucks or wherever, consider: Might it just be easier and simpler to give them cash instead? At least they can redeem their banknotes at the Federal Reserve for gol…oh wait.