French Minister of Economy and Finance, Bruno Le Maire, told CNBC’s Dan Murphy on Sunday at the G-20 Finance Ministers and Central Bank Governors’ Meetings in Riyadh, Saudi Arabia, that the Covid-19 outbreak will have a material impact on the French economy and the world.

The country’s finance minister warned France’s tourism sector has plunged following the outbreak of the virus last month. “We have fewer tourists, of course, in France, about 30%, 40% less than expected,” Maire said.

“That’s, of course, an important impact for the French economy,” he said. Tourism represents 10% of GDP in the country and supports upwards of 3 million jobs.

Maire said France welcomed 2.7 million Chinese tourists last year, “It won’t be the same, of course, in 2020,” he said, referring to the more than 200,000 flight cancellations since the virus broke out in China last month.

France has reported 12 confirmed cases of the virus, and one death as the country “activates” 70 new hospitals in preparation for a much broader outbreak.

“I have decided, in agreement with the Prime Minister, that 70 establishments with a SAMU [urgent response team, service d’aide médicale urgente] will be activated tomorrow to increase our response capacity if necessary.”

Veran said the country would boost its “testing capacity,” adding that protective gear, such as virus masks and biological suits, will be ordered in “large quantities.”

He added: “We are acting quickly and decisively in the face of the threat of an epidemic…We are taking all the necessary measures to ensure the safety of the French people.”

Much of the outbreak in Europe is situated in Lombardy, a region in Northern Italy. 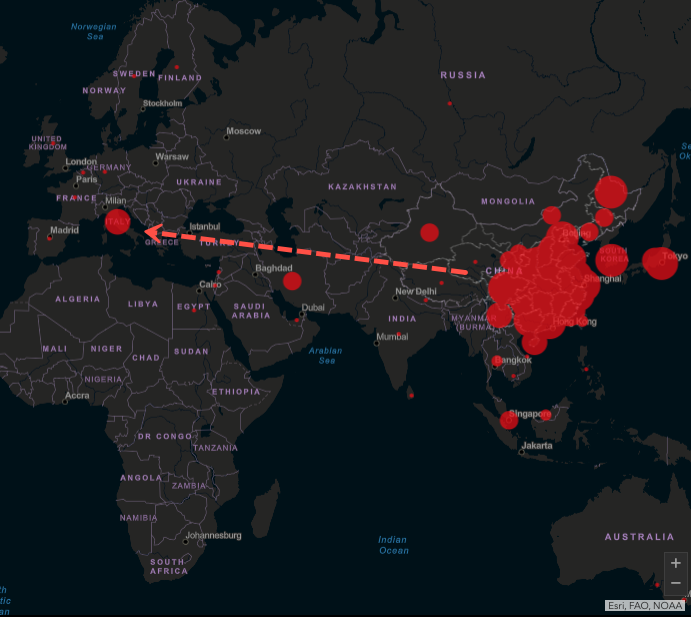 More than 200 confirmed cases in Italy have been confirmed on Monday and four deaths. The country is taking similar measures as China did, shutting down cities and businesses as its economy starts to grind to a halt.

Both France and Italy are already in danger of missing growth targets for 2020, and the outbreak of the virus on the continent could tilt both countries into recession.

A much more significant risk is developing as a virus shock from China could push Europe into a downturn. Germany, the economic heartbeat of Europe, is already teetering on the edge of recession, the longer China’s economy remains in economic paralysis, the bigger the risk it’s to Europe.

We’ve provided many articles on the evidence of creaking global supply chains fast emerging in China and spreading outwards to places like Asia Pacific countries, Europe, and the US.

Still, Europe would be exposed to secondary shocks as the global economy would experience lower trade growth. 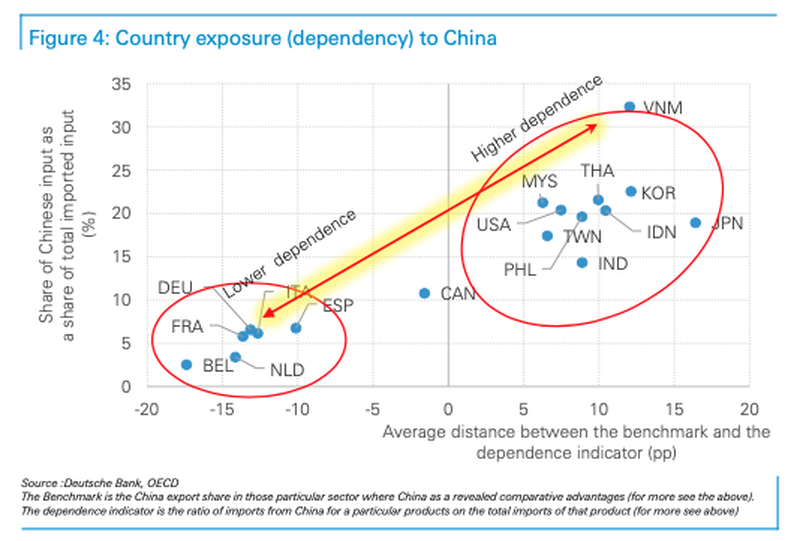 To summarize, the deadly virus has now arrived in Europe, specifically in Italy and France – it comes at a difficult time for the region as recession risks flourish. The European Central Bank’s monetary cannon is widely exhausted and could fail in a bid to shore up the content’s economy.