Super Tuesday is here – the first major milestone in the Democratic primaries that will set the tone for the rest of the 2020 election. Believe it or not, all of the primaries up till this point have amounted to just 4% of pledged delegates in the race. Super Tuesday, on the other hand, will see 34% of the overall delegates awarded. 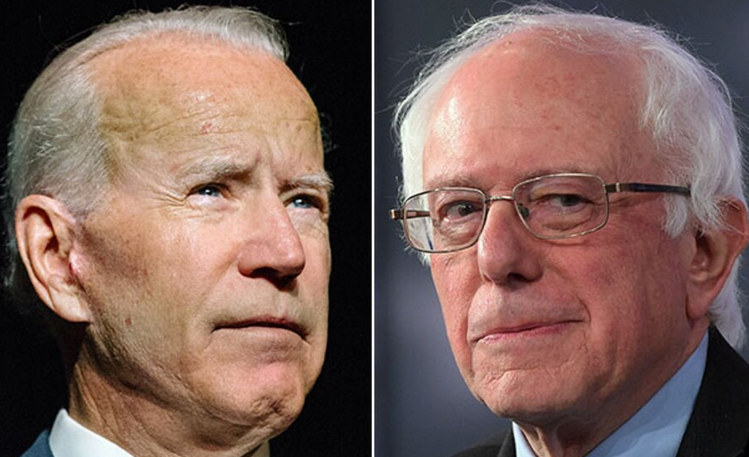 First, here’s a 2020 election calendar which notes the percentage of delegates awarded by state contest: 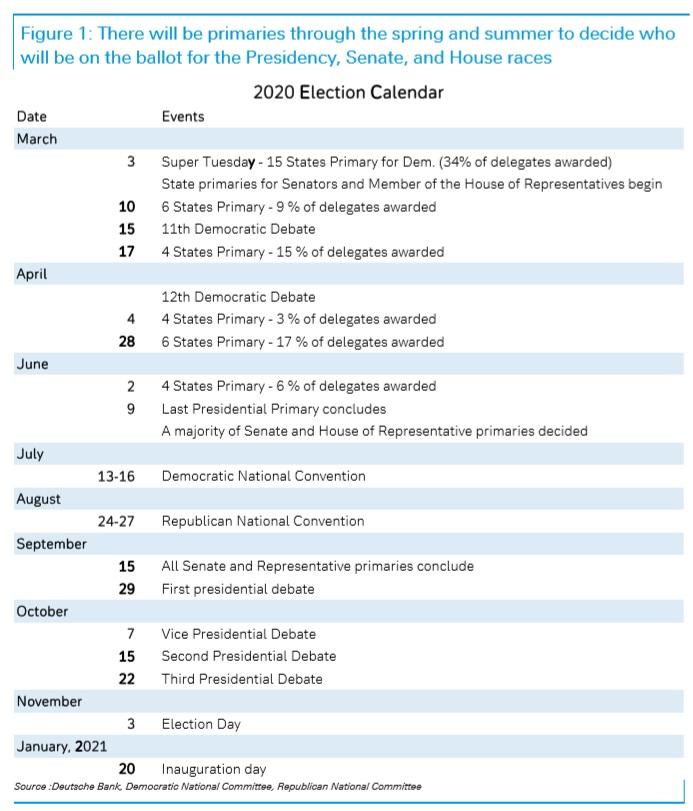 As far as the Democratic candidates go – in short, Sen. Bernie Sanders (I-VT) needs to score a decisive victory today in order to earn enough delegates to avoid a ‘brokered convention’, In particular, he’s looking to pick up as many of California’s 415 delegates as possible. He’s already got a 14 point lead in the state according to RealClearPolitics.

To win the nomination on the first ballot, the Democratic candidate must win a majority of pledged delegates – this year 1991 delegates. If no candidate has the required majority at the end of the first ballot, then the convention is contested, also known as a brokered convention (we will get into this more below) and goes to a second ballot and then on to subsequent ballots as needed. On the second and following ballots, the superdelegates are able to vote and now the winning candidate must secure a majority of the full 4,750 delegates, therefore 2,376 votes or higher. -Deutsche Bank 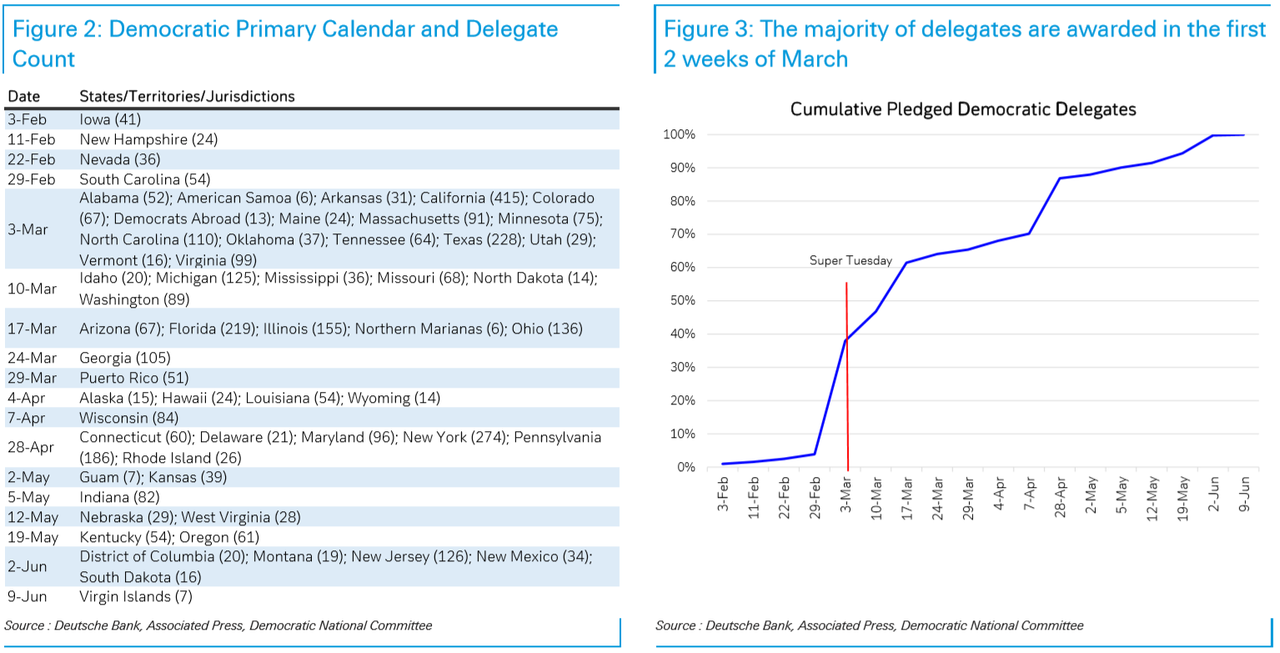 That said, DB notes that “No one” is likely to win the majority of pledged delegates unless Sanders wins something close to 50% of the delegates, and nobody comes close enough that the Democratic party would rally behind him out of fear of “alienating and disenfranchising just under half the primary voters.”

It is hard to project how exactly a brokered convention would unfold this far out and what the party and candidate machinations would be. It will come down to how the rest of the primary process unfolds, but one could see a world where Sanders has 30% of the vote and Biden or one more moderate candidate has just less than that and their voters decide to coalesce and try to say the party in aggregate wanted a more moderate candidate. Alternatively there is a scenario where Sanders ends up in the high 40s% and there is no close second place challenger and the party comes behind him for fear of alienating and disenfranchising just under half of the primary voters. -Deutsche Bank

If Sanders doesn‘t score a decisive win today, moderate Democrats will continue to rally behind this guy:

“We hold these truths to be self-evident.. all men and women are created by… go… you know, the thing!”

This is the candidate that the Democratic Establishment is currently rallying behind.
pic.twitter.com/GlKpblT3En

https://platform.twitter.com/widgets.jsWho, has seen a serious surge in the last couple of days following his decisive victory in South Carolina last week, according to PredictIt.

The Democratic establishment has been circling the wagons around Biden as well, including former Senate Majority Leader Harry Reid (D-NV) and former US Ambassador to the United Nations Susan Rice, both of whom endorsed the former Vice President on Monday.

Bloomberg, however, suggests that Biden’s surge still might not be enough to topple Sanders and translate that momentum into serious gains on Super Tuesday.

Sanders holds the advantage in key contests – including delegate-rich states like Texas and California – and former New York Mayor Michael Bloomberg threatens to play spoiler. So the risk for moderate Democrats is that the exit of Pete Buttigieg and Amy Klobuchar is too little, too late.

Sanders – a self-described democratic socialist who many in the party fear would return President Donald Trump to the White House – seems certain to emerge with the most delegates. Biden’s task is to win enough support to stand as a credible challenger to Sanders as the primary calendar moves to frequent contests that stretch through June, a task that would be made easier by the growing support he’s received just since Saturday night. –Bloomberg

Meanwhile, Bloomberg – the candidate, not the news outlet, threatens to carve delegates away from the moderate Biden after pouring unprecedented personal resources into advertising his way into the nomination. If Biden is to stand any chance going forward, it’s clear that he needs to finish ahead of the former New York City mayor.

Bloomberg, if he wants to remain a contender, must blow past Biden today despite terrible debate performances and a slew of controversial past comments which have emerged to hurt the billionaire Democrat – who ran for NYC mayor as a Republican, and allegedly told a pregnant woman to ‘just kill’ her baby.

According to 11 polls released on Sunday and Monday, Bloomberg never placed higher than second place – and led Biden in just three of the 11 polls, according to The Hill.

Here are the candidates’ various positions. One point of agreement is that corporate tax rates will go up – effectively unraveling the 2017 Tax Act on businesses. 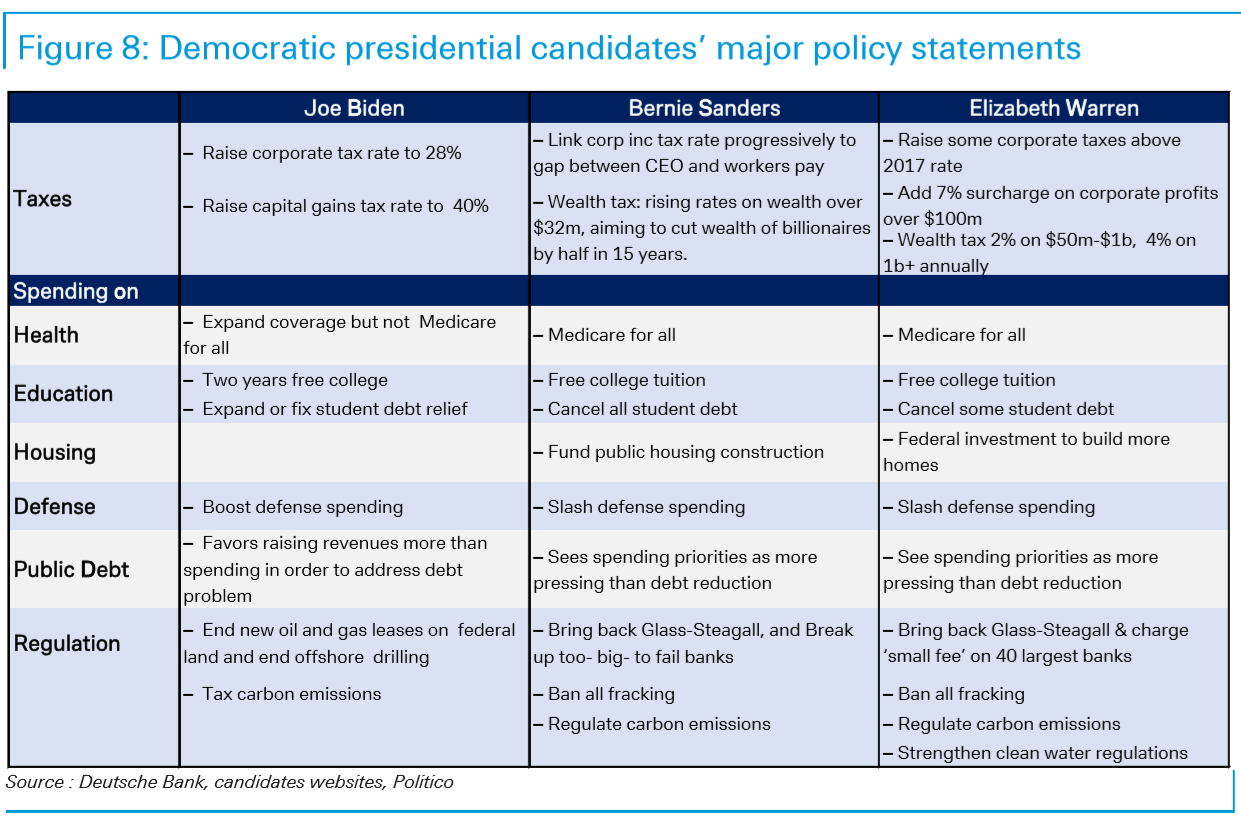 Still, as Deutsche Bank notes, “The most important takeaway from these policies for markets would be to measure what could they get done without a friendly Senate, given they could hold the House. We will have a much better idea of the probabilities later this summer as the Senate and White House races are decided and really start.”

Once primaries are over by the end of the summer, the focus will shift to the Presidency and winning the Electoral College. There are 538 electors, for which a candidate requires an absolute majority of 270 electors to win the race.

In 2016, Trump won 306 electors in 30 states vs. Hillary Clinton at 232 in the other 20 states. Trump’s biggest electoral college victories were scored in the upper Midwest – Michigan, Wisconsin and Pennsylvania to the east – which he won by less than 100,000 votes combined, or roughly 1% in each state according to DB. Due to the slim margin, these will be important regions for Trump to win again in 2020, along with the “Sun Belt” swing states of Florida, New Mexico and possibly Arizona which has turned more blue in recent cycles (perhaps due to California transplants).

The map below shows the states that may be ‘solidly’ Democratic and Republican, having voted along those party lines over the last 5 elections. That is not to say they will all vote along the same lines in 2020 – as already mentioned, the vote spread in states like Arizona have been tightening. The final electoral college projection will need to be made in the summer after voters decide on who the Democratic contender is – a more moderate voter may be able to have better chances in southern swing states like North Carolina and Florida, while Sanders’s strength with young voters and independents may help him in states like Arizona and Colorado. -Deutsche Bank 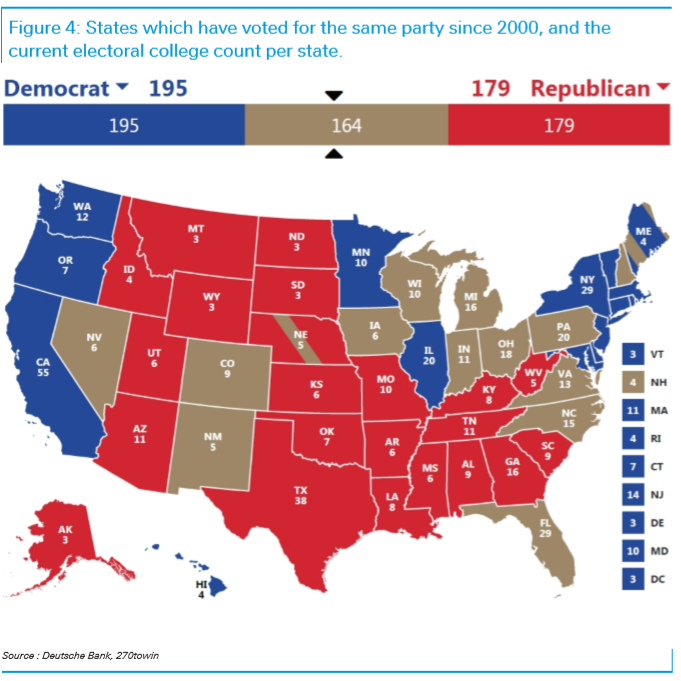 While 95% of respondents in Deutsche Bank‘s monthly survey believe that President Trump will likely win a 2nd term – with 60% thinking it’s “very likely,” the research note mentions the potential impact of exogenous events such as the new coronavirus which has achieved ‘community spread’ in the United States (just two weeks after the CDC director said it would happen later this year, or next year).

The report notes that just 3 out of the 11 incumbents have been voted out of office since WWII – George H.W. Bush, Jimmy Carter, and Gerald Ford, all of whom were impacted by rising unemployment going into November – which suggests that “an economic slump would damage Trump’s chance.”

President Trump is right to focus on the economy in his re-election bid, with historically low unemployment and strong consumer sentiment numbers. Nearly 7 months from the election, it looks like he should be in good shape on these metrics, outside of a large shock causing an inflection that we have yet to see. How Covid-19 develops over the spring and possibly into the summer could be key to this.

Also – consider that if coronavirus has gripped the country by November, the disease which is deadliest in older individuals may have an effect on who comes out to the polls. 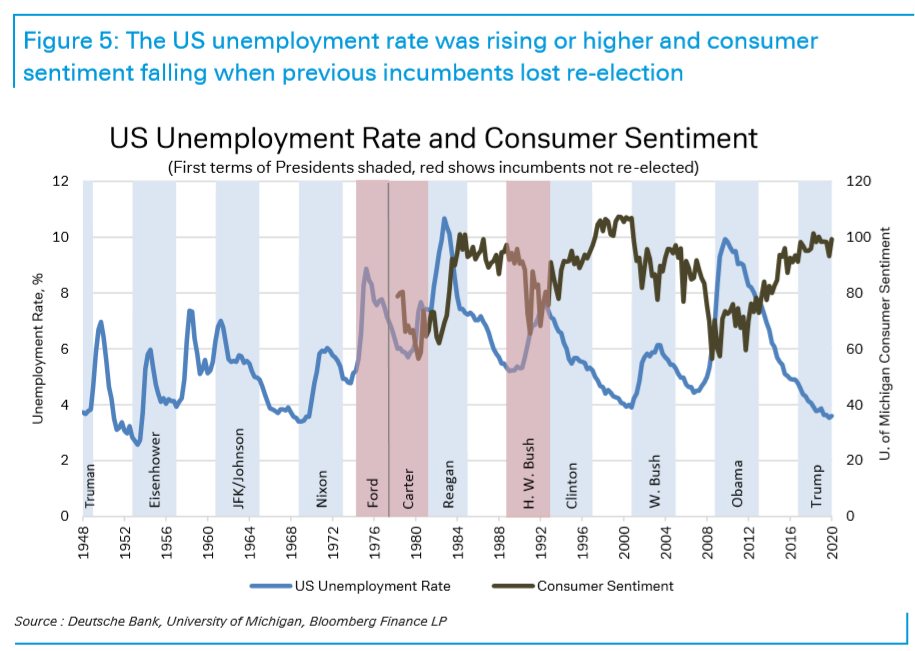 Helping Trump is his strong approval rating, though he will likely need them to rise further in order to feel comfortable about his chances of re-election. Gallup has Trump’s approval rating at the highs of his presidency – right around 50%, which is in-line with all of the other previous 7 presidents at the same point in their presidencies, according to DB.

So we’re looking at either Sanders or Biden vs. Trump, amid the potential backdrop of an exponentially worsening pandemic and its effects on people and the economy.