Chaos As ‘Enhanced Screening’ Airports Overwhelmed; US Citizens Scramble Back From Europe

Chaos As ‘Enhanced Screening’ Airports Overwhelmed; US Citizens Scramble Back From Europe 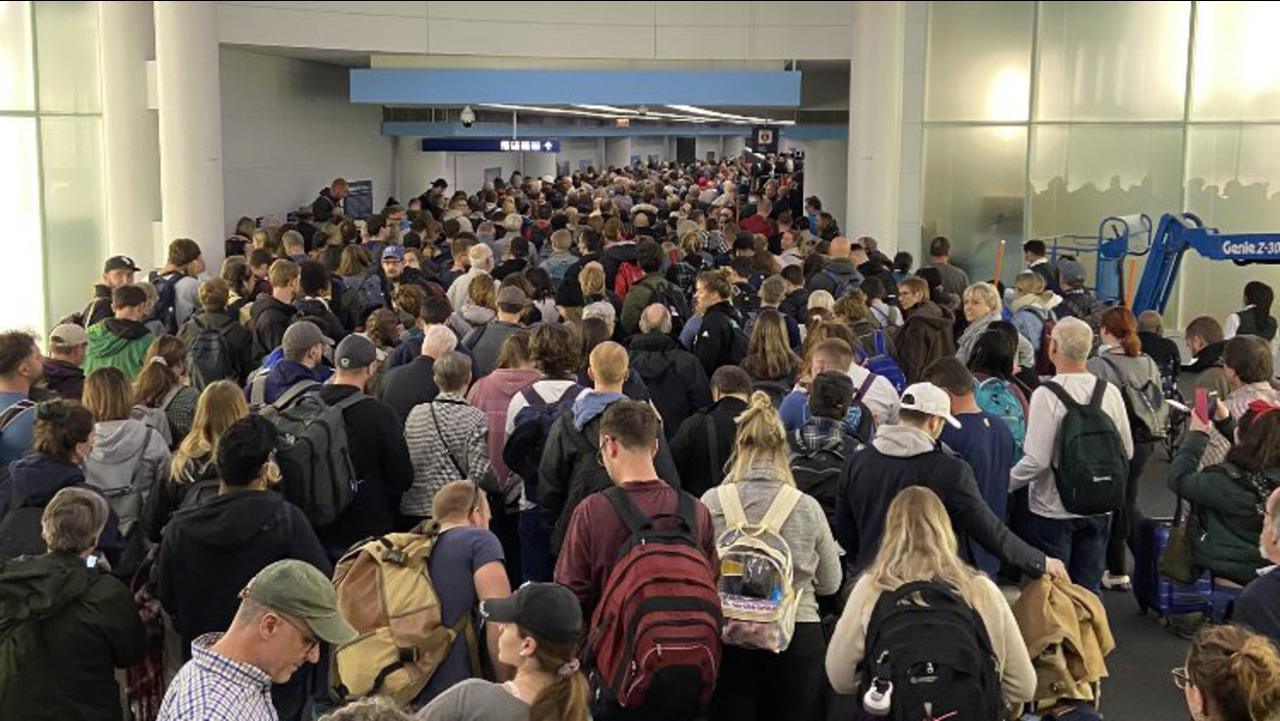 Videos and photos posted to social media reveal a weekend of insanity and packed airport queues in an increasingly ‘high risk’ health crisis.

Chicago’s O’Hare International Airport revealed the most chaotic scenes: thousands standing should-to-shoulder in an airport corridor amid a deadly pandemic, reportedly for at least seven hours before entering the screening area and airport exit.

Airports authorized to receive return flights from Europe, and which are set up for Covid-19 screening, include the following according to the advisory:

O’Hare Airport acknowledged Saturday in a public statement that screening and control areas were taking “longer than usual”. The ‘enhanced screening’ includes a temperature check and questions about flyers’ recent travel history.

This is the scene at O’Hare airport. The traveler who took the photo said it’s a 6-hour wait for bags then on to customs for 2-4 more of waiting in shoulder-to-shoulder crowds. Police are handing out water and disinfectant wipes. @fly2ohare #ord #coronavirus #COVID19 pic.twitter.com/UTx9E0nj1s

The airport chaos led to a response from Illinois Gov. J.B. Pritzker who tweeted that the situation at O’Hare and the massive crowds were “unacceptable”.

Other officials slammed the intensifying situation as creating a serious health risk.

Over 4 hours later…back in the large hall, not sure where the #Covid19 screening happens. They’ve handed out snacks, water & r/r breaks. Def missing my flight home tonight. Not sure what’s next #ohare #StillStanding #BreathingLessons #MouseInAMaze pic.twitter.com/iT9jYvNKoN

Airport staff at O’Hare and other airports were seen handing out snacks, water, hand sanitizer and disinfectant wipes to the anxious crowds.

Passengers waited in line for hours at customs at @DFWAirport. Many concerned about being so close to others during the #COVIDー19 outbreak. The airport saying “CBP officers and the CDC are following federal guidelines to conduct enhanced screening for passengers” @FOX4 pic.twitter.com/4BFUEau0Hg

The WSJ interviewed one frustrated passenger who described the Covid-19 screening measures:

Lonnie Corpus was returning from Iceland with friends—retired teachers from Wisconsin. Their flight landed at 6:40 p.m. They made it out at about 11 p.m. The questioning itself, and a quick temperature check, didn’t take long once they made it to the front of the line that snaked around corners.

State and local officials are now urging the federal government to step in and assist with the massive delays and airport infrastructure strain, but whatever drastic action might be taken increasingly looks too little too late.

The ‘Great Replacement’ In Switzerland