Friday’s record 2000 Dow point surge will likely be cut in half if the spread bettors at IG are correct in indicating that the Dow is set to open about 1,000 points lower. 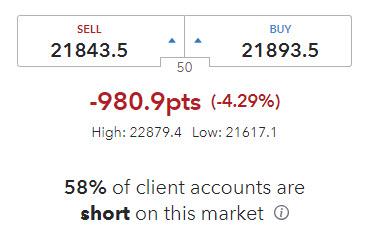 Meanwhile, in FX markets which are already open, moves appear relatively calm with the dollar modestly higher across most pairs expects the Yen, which however crashed on Friday as the US dollar funding squeeze hit levels not seen since the crisis.

Two caveats: this level is just indicative based on a handful of traders in a market vacuum, and ignores all the positional reflexivity and negative gamma that will emerge violently on the scene one futures do open for trading, where a crash as big as this will likely drag futures even lower… or not. The truth is nobody knows what happens next as the market has never before found itself in such a place.

Two: even if futs open about 4% lower, where they go from there will depend on the Fed. If, as BofA expects, the Fed announced a Commercial Paper facility, watch out above, as futures soar limit up as the dollar funding crisis is set aside for the time being. On the other hand, if the Fed does nothing and disappoints “whisper” expectations of a late Sunday intervention, then all bets are off.

Erdogan Breaks Silence: Says The US Sent 30,000 Truckloads Of Weapons To Syria

Why Congress Is Even Worse Than You Think