Update (1130ET): Despite complaints about strict testing requirements and a general sense of hysteria leaving thousands self-quarantined out of fear of spreading or catching the virus, the number of confirmed cases in NYC has skyrocketed from fewer than 30 earlier in the week to 269 as of Sunday morning.

Over the past week, Mayor Bill de Blasio and NY Gov. Andrew Cuomo have insisted that they will do everything possible to keep NYC’s subway and its schools – which hundreds of thousands of children depend on for shelter and food – open. But on Sunday, with the mayor coming under increasing fire from public health activists warning that he might be putting immuno-compromised and other at-risk individuals in danger by denying that students who catch the virus as school could spread it to their parents asymptomatically (research suggests the virus can spread before symptoms emerge).

“Every option is on the table in a crisis,” de Blasio said during an appearance on CNN Sunday morning. “We’ve never seen anything like this.”

Meanwhile, some local officials are taking matters into their own hands, with the Acting Queens Borough President Sharon Lee urging all families in the borough to keep their kids home from school next week after a student at a school in Woodhaven tested positive.

Local official taking matters into her own hands #CLOSENYCPUBLICSCHOOLS pic.twitter.com/TRV5MwdKXx

From @NYCSchools: Confirmed case of #coronavirus at P.S 306 in Woodhaven, Queens. A School Safety Agent tested positive, and was last at work on March 6. Building will be deep cleaned today, will be open Monday pending health department confirmation

During the interview on CNN, de Blasio said that contingency plans are being “set up”, but as one reporter pointed out, it doesn’t sound like the city has a ‘contingency plan’ in place to handle the backlash from closing the city’s schools, which is an incredibly rare occurrence: even one- and two-day closures due to weather in the winter are rare in NYC.

Sounds like @NYCMayor doesn’t have a full contingency plan ready to #CloseTheSchoolsNow. Just now on CNN:

“Those contingencies are being built as we speak”

As more professionals and white collar workers hunker down in their apartments, Goldman Sachs just announced that an employee at its London office had tested positive.

After declaring that it would no longer accept cruise ships stopping at the island earlier in the week, Puerto Rico’s governor on Sunday declared a daily curfew from 9 p.m. to 5 a.m. due to coronavirus, prompting gyms, cinemas and “non-esential” stores to close at that time.

Over the past week, Wal-Marts across the country have been overwhelmed by panicked shoppers stocking up on toilet paper and other non-essentials as the coronavirus hysteria has rattled communities coast to coast, in many cases before a single incidence of community spread had even been detected.

With many stores running out of stock before new shipments can arrive (some due to a mix of panic-buying and supply-chain disruption), Wal-Mart corporate has decided to compress the hours of its 24-hour stores across the country.

Beginning Sunday, and lasting until further notice, 24-hour Wal-Mart stores will be open from 6 am to 11 pm, according to a statement from the company.

As the largest grocer in the US, Walmart has been dealing with “a significant increase” in sales as customers panic buy groceries, hand sanitizer and toilet paper. But it’s hardly alone in making changes to adapt to the new circumstances. Some grocers, including H-E-B, have adjusted by limiting purchases of food and cleaning supplies. Others, including Kroger, are advertising immediate job openings to keep up with heightened demand (with many suffering from pay reductions or other cash-flow problems, they might be able to help out a few people while keeping up with the massive demand).

Wal-Mart has also given managers discretion to limit purchases of items that are in high demand.

Stop & Shop, which is owned by Ahold Delhaize, said most stores will be open only between 7:30 am to 8 pm starting Monday. The company is also suspending its online delivery service.

President Trump is expected to hold a call with the CEOs of America’s largest grocery chains on Sunday.

As we reported last night, the first death in the state of Louisiana tied to Covid-19 was announced by Gov. John Bel Edwards. A few hours alter on Saturday, a 70-year-old man in Multnomah County became the first person in Oregon to die from the coronavirus, according to the Oregon Health Authority. Officials said the man was hospitalized at the Portland Veterans’ Affairs Medical Center and died Saturday. He tested positive for the virus on Tuesday.

According to the Washington Post, 2,952 cases of the virus have been confirmed by states and the CDC. Meanwhile, the death toll in the US climbed to 58 overnight.

According to USA Today, 20 states and a number of large urban school districts, including LA, the nation’s second-largest – are shutting down all K-12 schools as part of a sweeping attempt to contain the spread of the coronavirus. Alabama, Alaska, Delaware, Florida, Kentucky, Illinois, Louisiana, Maryland, Michigan, New Mexico, North Carolina, Ohio, Oregon, Pennsylvania, South Dakota, Utah, Virginia, West Virginia, Washington and Wisconsin have made plans to close all schools. Major metropolitan districts such as Atlanta, Denver, San Francisco, San Diego, Washington, D.C. and Austin, Texas, have also shuttered. And a growing number of smaller districts around the country have also chosen to close.

West Virginia is the last US state to have not confirmed a single case of the virus, though its governor, Jim Justice, insisted that the “monster” is “looming” over his state. 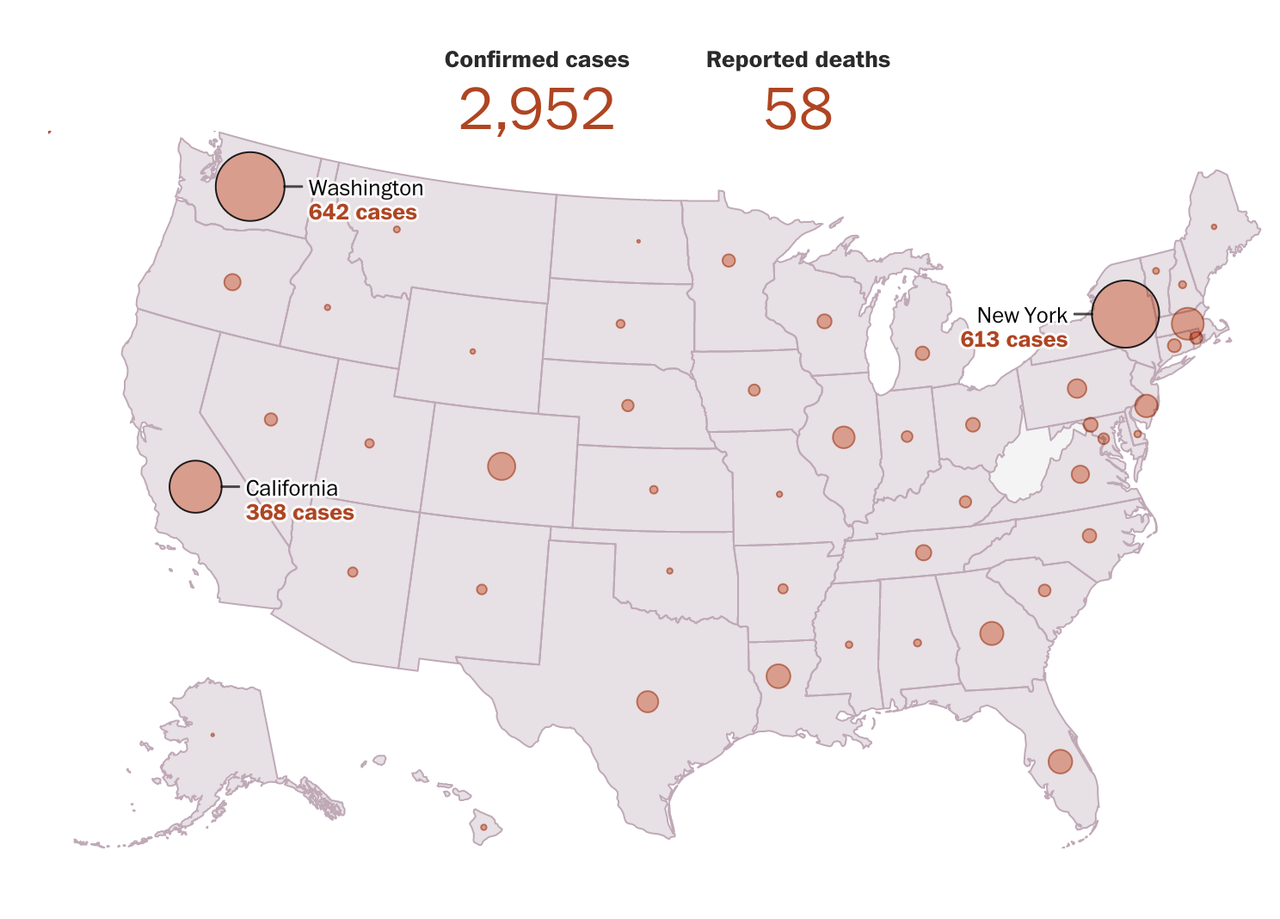 In a blow to the credibility of the mainstream news networks and their White House reporting staff, Trump revealed Saturday night that he had tested negative for Covid-19.

In California, Gov. Gavin Newsom said he would commandeer hotels and motels across the state and press them into service as quarantine centers, if necessary.

The Trump Administration is riding high right now thanks to its twin triumphs of invoking the national emergency and winning a compromise with Dems. Treasury Secretary Steven Mnuchin said Sunday that he “doesn’t expect a recession” to result from the outbreak – yet another example of a Trump Administration official saying what needs to be said to try and keep the public’s confidence from completely collapsing.

“Later in the year, obviously the economic activity will pick up as we confront this virus,” Mnuchin said Sunday.

Over in Europe, the Netherlands reported a nearly 200-case jump on Sunday, bringing its case total up 176 to 1,135. Portugal, whose President is still in self-quarantine, saw confirmed cases climb to 245 from 169. Norway saw cases climb to 1077 from 907.

After Israel banned gatherings over 10 and closed its borders, its central bank on Sunday launched a QE program to buy government bonds.

During an interview with CNN Sunday morning, Dr. Anthony Fauci, the NIH infectious disease specialist who is helping to direct the federal response, said that yes, of course it’s possible that “thousands could die” from the outbreak.

But the goal is for the government to make sure the response is successful, and that this doesn’t happen. To help the government, Fauci said Americans should brace to “hunker down” even more.

It’s Back To Cold War Days Over The Baltic

Swedish Behavioral Scientist Suggests Eating Humans To “Save The Planet”

An Austrian Frame of Mind