Oil surged as much as 13% this morning following a report that China is planning to start buying cheap crude for its strategic reserves, as well as speculation that President Trump said he thought Saudi Arabia and Russia would resolve their differences in the oil price war that has sent supply soaring even as global oil demand tumbles.

Following massive builds in crude in the US as reported by the DOE and API, and amid sporadic reports that various storage facilities are starting to fill up:

Beijing has asked government agencies to quickly coordinate filling tanks, Bloomberg source said. In addition to state-owned reserves, it may use commercial space for storage as well, while also encouraging companies to fill their own tanks. The initial target is to hold government stockpiles equivalent to 90 days of net imports, which could eventually be expanded to as much as 180 days when including commercial reserves. 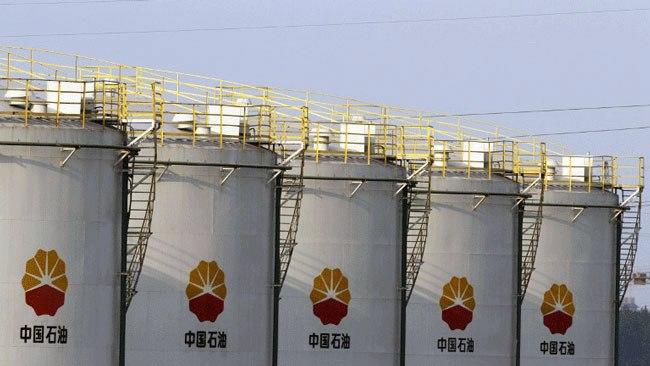 According to Bloomberg calculations, 90 days of net crude imports translated to about 900 million barrels. By comparison, the U.S. currently holds about 635 million barrels in its Strategic Petroleum Reserve, according to government data.

And while the current size of China’s state reserves is unknown, and Beijing could use a different method for calculating net imports, oil traders and analysts at SIA Energy and Wood Mackenzie estimated it could amount to China buying an additional 80 million to 100 million barrels over the course of the year before it ran into logistical and operational constraints.

In September, the head of development and planning at the National Energy Administration said the country had total oil reserves, including strategic stockpiles, for about 80 days. In December, state-owned China National Petroleum Corp. said on its website that the government intends to boost the capacity of its strategic petroleum reserves to 503 million barrels by the end of this year, an indicator of the maximum amount the government can store.

The volume targeted is about the same as the Trump administration proposed buying last month for U.S. reserves to help that country’s drillers. The plan was thwarted after Democrats blocked a request for funds.

China is also planning to announce the fourth batch of strategic reserve sites, the people said. The expansion project has the dual advantage of creating larger emergency reserves and as an economic stimulus project to spur construction opportunities as the country recovers from the coronavirus.

While the purchases could help soak up some excess supply, traders said it will fall well short of offsetting the overall glut created by the virus lockdowns and the price war between Saudi Arabia and Russia.

As Bloomberg adds, China’s move comes as the physical crude market shows deepening signs of strain as supply explodes and demand collapses due to the coronavirus. Dated Brent, the benchmark for two-thirds of the world’s physical supply, was assessed at $15.135 on Wednesday, the lowest since at least 1999. Crude has slipped below $10 in some areas including Canada and shale regions in the U.S., Belarus wants to buy Russian oil for $4, while some grades have posted negative prices.

“News that China will take advantage of lower prices to add to reserves has clearly provided a boost to the market,” said Warren Patterson, head of commodities strategy at ING Bank NV. “But given the extremely bearish outlook for the market it is difficult to believe that this strength is sustainable.”

Speaking late on Wednesday, Trump said he expects the situation with Saudi and Russia will be resolved. He also said he’s planning to meet with independent oil producers in addition to the majors. “They’re negotiating, they’re talking, and I think they’ll come up with something,” Trump said. “I do believe there’s a way that that can be solved or pretty well solved.”

According to the WSJ, Trump is set to meet Friday with the heads of some of the largest U.S. oil companies to discuss measures to help the industry as it fights for survival. The chief executives of Exxon Mobil and Chevron are expected to attend.

Also attending the White House meeting will be Continental Resources Inc. CEO Harold Hamm, who has called for the Trump administration to intervene in the Saudi-Russian price war. Other shale companies have called on state regulators to enforce production cuts in Texas.

Trump also said he was confident Saudi Arabia and Russia would resolve their dispute over oil output and prices in the coming days.  In response, Russian President Vladimir Putin said Wednesday that oil producers should cooperate to mitigate the market decline, adding that Moscow is discussing the condition of the oil market with Washington and the Organization of the Petroleum Exporting Countries.

The main driver of oil’s rally was “the announcement by Trump telling the world ‘we’ve been talking with the Russians and the Saudis and he’s quite proud of these oil diplomacy efforts,” said Bjørnar Tonhaugen, head of oil markets at consultancy Rystad Energy. “He’s trying to save the U.S. industry from collapse.”

Still, the oil rally faded and sellers emerged later in the morning as many oil-market watchers remained skeptical about the impact of any end to the price war given the impact of the lockdowns on demand.

“I don’t think this meeting significantly changes things, the oil market is still way out of balance and oil stocks are still rising at an unprecedented rate,” said Spencer Welch, director of oil markets at IHS Markit. “Producers are going to have to involuntarily cut production because there’s going to be nowhere for the oil to go.”

And as the world awaits for a change in status quo, oil storage around the world is beginning to fill up, prompting some companies to enact production cuts. Brazilian state-owned giant Petrobras last week became one of the first major companies to announce such reductions. Even with Thursday’s rally, oil prices remain below the cost of production for the U.S., Canada and Russia. Meanwhile, in the U.S. stockpiles grew by the most since 2017 on Wednesday, while consultants from IHS to FGE have said that world inventories may be full within weeks, an event Goldman previously said would be a game changer for the industry and prompted the bank to expect prices to dip in the teens if only for a short while.