Not even in Khruschev’s wildest dreams did central planners ever conceive of anything so absolutely batshit insane as what is taking place in US “markets” right now.

With the US economy sliding into a depression which will last at least one quarter, and if Evercore’s Ed Hyman is correct  well into the second half if not 2021…

… it is not a surprise that according to the latest New York Fed survey of consumer expectations, virtually every metric having to do with one’s financial well being – income, wealth, debt sustainability and earnings expectations – is cratering.  For example the expected probability of losing one’s job jumped to an all-time high of 18.5%; the probability of missing a minimum debt payment over the next three months surged to 15.1%, and expected earnings growth tumbled to just 2%.

While the above data may not have been surprising, what was shocking is what the Fed reported was the average consumer expectation for stock prices in the future: according to the NY Fed, the mean probability that US stock prices will be higher one year from now surged to 47.7%, the highest on record. 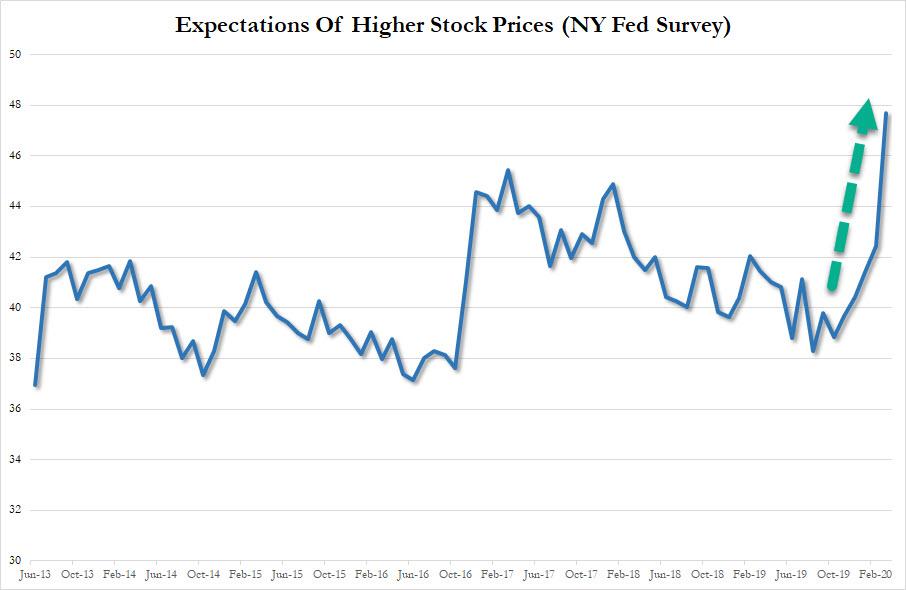 Right… because with his job gone, his $400 dollars of emergency savings just spent on a roll of toilet paper, his bank preparing to foreclose on his home, all while a deadly virus lurks in every corner, all Joe Sixpack can think of is how to get his “money on the sidelines” into the stock market as it is about to soar to all time highs.

And so, thanks to the Fed’s now grotesque interventions in all capital markets, including the purchase of over $1 trillion in securities in the past two weeks, the stock market is now perceived by conventional wisdom as a countercyclical indicator, one which surges the worst the economy gets, and with the economy sliding into a depression it is only “logical” – we use the term loosely – that expectations of higher stock prices have never been higher.

That of course is the absurdist interpretation of the above “data’. There was, naturally, a serious way of looking at this delightfully ridiculous data and lacking a sense of humor, David Rosenberg applied just that, tweeting that “I was so close to turning more bullish (less bearish?) until I see this metric was released by the New York Fed on consumer expectations.  Since when do bear markets end on record optimism?”

I was so close to turning more bullish (less bearish?) until I see this metric was released by the New York Fed on consumer expectations. Since when do bear markets end on record optimism? pic.twitter.com/Gddwl5JDbj

Oh David, “since when” do you still think that anything you observe in this economy or market, both stuffed to the gills with trillions and trillions in freshly printed fiatscoes, matters or makes sense. And to answer your question: bear markets end when the Fed says so, and proceeds to do to stocks what it did to IG bonds – and start buying directly.

And incidentally David, you may want to reasses your nothing can beat deflation thesis. Albert Edwards already has, and has said farewell to his “great ice age” thesis that defined his work for the past 30 years. We wonder how long it will take you to realize that we now live in a time of helicopter money and that markets – by any definition  – no longer exist, and what comes next it a tsunami of debt and money much of which will finally make its way, kicking and screaming into the broader economy.

Don’t believe us? Just take one look at gold, where the beginning of the end is finally starting to be priced in.

“Bracing For The Worst Crash Of Their Careers”: A Quarter Of All Outstanding CMBS Debt Is On Verge Of Default

Did Covid-19 Just Pop All the Global Financial Bubbles?

Tariffs: The Taxes That Made America Great