As we’ve been warning over the last several weeks, the beginning innings of social unrest in the Western world could be developing. Millions of people have just lost their jobs, the economy has crashed, and suicides and domestic violence are increasing, this is all the characteristics of a recession, if not a depression in the second quarter.

Last week, Amazon and Instacart workers kicked off strikes to demand safety equipment and better pay amid the virus pandemic that has left some of their colleagues in the hospital, infected with the deadly virus. Amazon employees walked out of a Staten Island warehouse on Monday, the second week in a row. We noted last week how strikes and protests would likely spread “to other businesses.”

And we were right, now workers at some Massachusetts grocery stores will protest on Tuesday morning to demand medical equipment and the need for hazard pay as their probabilities of contracting the virus are high.

Organizers told WCVB Boston that employees from Whole Foods, Stop & Shop, Trader Joes & Shaw are expected to join the rally, scheduled for 1100ET outside the Whole Foods at 348 Harrison Ave in Boston.

The organizers are requesting that employers provide workers with “hazard pay of time and half for the duration of the COVID-19 crisis.” During the protest, workers are expected to abide by Massachusetts’ social distancing rules and stand 6 feet apart from others.

The protest comes as major supermarket chains across the country are starting to report an increase in virus cases and deaths.

On Monday, a Trader Joe’s worker in Scarsdale, New York, an employee at a Giant store in Largo, Maryland., and two Walmart employees from the same Chicago-area store have just died in recent days after their exposure to COVID-19, the companies said on Monday.

Some experts are saying the rise of virus cases and deaths at supermarkets across the country is because companies did not adequately prepare workers for a public health crisis:

“One of the biggest mistakes supermarkets made early on was not allowing employees to wear masks and gloves the way they wanted to,” Supermarket analyst Phil Lempert said. “They’re starting to become proactive now, but it’s still going to be much tougher to hire hundreds of thousands of new workers. We’re going to start seeing people say, ‘I’ll just stay unemployed instead of risking my life for a temporary job.'”

Strikes and protests aren’t limited to an Amazon warehouse or Instant cart workers and or supermarkets, but now spreading to the fast-food industry.

McDonald’s workers in Los Angeles staged a strike on Monday, demanding face masks and hand sanitizer after an employee tested positive for the virus.

“We’ve been pleading for protective equipment for more than a month now, but McDonald’s is putting profits ahead of our health,” Perez said.

Perez claims that McDonald’s has yet to pay for any healthcare costs associated with testing employees. The restaurant has been shut down for sanitation.

Amazon and Instacart strikes last week have inspired the beginning innings of protests among low-income/low-wage workers, as it appears employees of Target’s delivery service Shipt will also strike on Tuesday.

And here’s some bad news that we outlined about the global COVID-19 infection curve on Monday, it appears the US is still in the exponential rise phase (acceleration), which means more people will get infected and die. 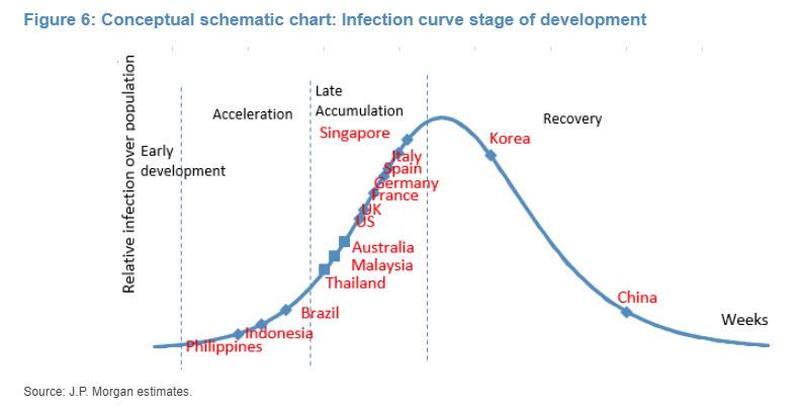 The evolution of the pandemic is social unrest, already developing with strikes and protests at major companies.

“We Can’t Give Our Product Away” – Farmers Toss Thousands Of Acres Of Fruits, Veggies As Sales Plummet