Yesterday we reported that ancient retail icon and anchor tenant at malls everywhere, JC Penney, was finally preparing to call it a day, and was set to file for bankruptcy protection, in the process ending lease payments and putting the thousands of malls in which it had an outlet in cash flow peril. A few hours later, rhe Texas-based department store chain disclosed in an SEC filing that it will not pay $12MM to bondholders that had been due. And while under the terms of the bond, due in 2036, the retailer has a 30 day grace period to make the payment before it is deemed to have defaulted, entering the grace period is usually a warning to customers and business partners – and especially vendors who immediately go Cash on Delivery – that a Chapter 11 filing is imminent.

While JC Penney’s default was long coming – not least due to the collapse in mall foot traffic long before the covid-crisis and the company’s untenable debt load which led to several near-death experiences in the past decade – it was the complete collapse in clothing store sales that was the tipping point. According to the Census Bureau, clothing store sales crashed more than 50% in March, an apocalyptic collapse for any levered retailer. 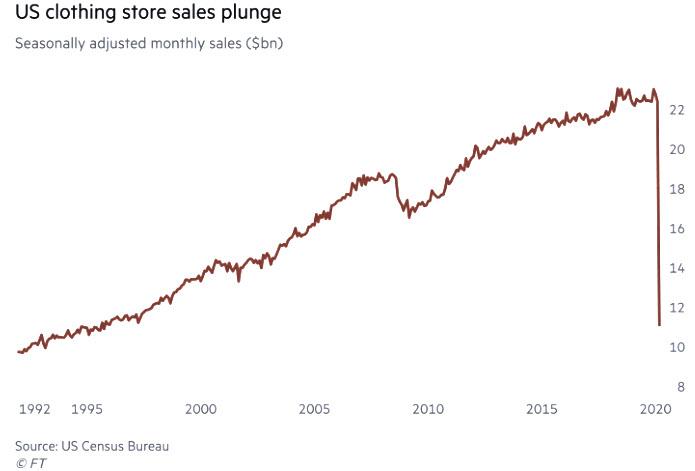 Indeed, JC Penney is just the beginning and on Thursday morning, Reuters reported that another mall anchor icon, luxury retaeiler Neiman Marcus Group, has also skipped a bond payment week to Marble Ridge Capital LP, according to a letter from the hedge fund to the luxury department store retailer sent Thursday, setting the heavily indebted chain on a path toward bankruptcy.

This confirms a recent report from Reuters according to which Neiman Marcus was preparing to file for bankruptcy. As Reuters adds, a Neiman bankruptcy filing would likely be contentious. A trustee for some of the company’s bondholders, including Marble Ridge, sued Neiman last year, claiming the company and its owners robbed investors of the value of luxury e-commerce site MyTheresa in the earlier debt restructuring.

The biggest loser from this waterfall of default which will collapse all cash flow payments from these massive retail giants, is the mall sector, which as a reminder was the target of the “Big Short 2” via the CMBX Series 6 BBB- index, and which plunged in late March making all those – such as Carl Icahn 0 who had bet on the collapse of that icon of US life, malls, very rich… 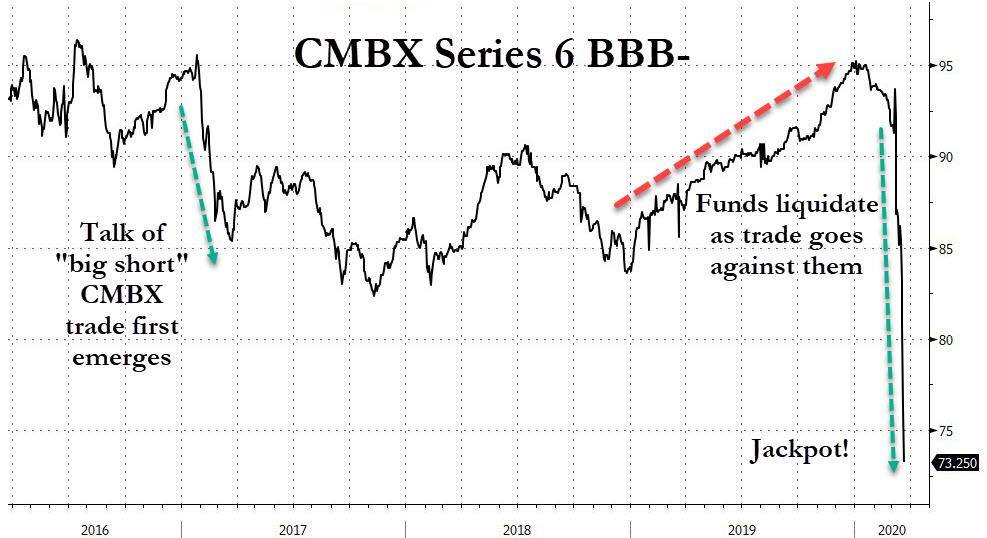 … and in fact, unlike the broader market which has staged a remarkable rebound in recent weeks, the mall-heavy Series 6 CMBX tranche continues to slide, and was just shy of all time lows at last check, which is a vivid reminder of what price discovery looks like when there is no Fed backstop (for now Powell is not buying deeply impaired CMBX tranches; that may change soon).

Once both JCP and Neiman Marcus file, that’s when the real downhill kicks in.

Signs Are Everywhere: Businesses Have Changed Permanently As A Result Of The Pandemic

The Most Crucial Pipeline Of The Middle East?