Trump Demands Harvard Return Stimulus Money; Harvard Responds It Has No Idea What Trump Is Talking About

Trump Demands Harvard Return Stimulus Money; Harvard Responds It Has No Idea What Trump Is Talking About

The resentment against publicly-traded companies and major corporations and enterprise who abused the Treasury’s $349 billion small and medium business bailout by applying for the Paycheck Protection Program is growing.

Earlier today, we reported that over 80 publicly listed companies tapped the PPP – which is really a grant if used to pay wages – which not surprisingly ran out of funds just days after it was launched. The most prominent public company to take the funds was Shake Shack, which sparked backlash after receiving $10 million in PPP funds through JPMorgan. Sensing pitchforks in its its immediate future, the company announced on Monday that it would be returning the funds. It then sold 3.4 million shares of stock raising $136MM in gross proceeds.

Another company which tapped into the PPP was Ohio-based biotech Athersys, which received $1 million through the program despite raising nearly $60 million in a Monday stock offering after its shares have nearly doubled YTD. Meanwhile Nikola Motor – backed by Fidelity and hedge fund ValueAct, announced a $4 billion valuation in early March when it announced a merger with VectoIQ. The company borrowed $4 million from the PPP according to a disclosure. Ruth’s Chris steakhouse made $42 million in profit on $468 million in revenue last year, yet tapped $20 million from the PPP.

The figure below lists the 40 largest PPP loans that inexplicably went not to small businesses but to major corporations which not only have access to institutional debt capital markets – unlike most mom and pop shops – but can also sell stock and raise cash overnight, a luxury that America’s small business – which employ over half the US labor force -do not have. 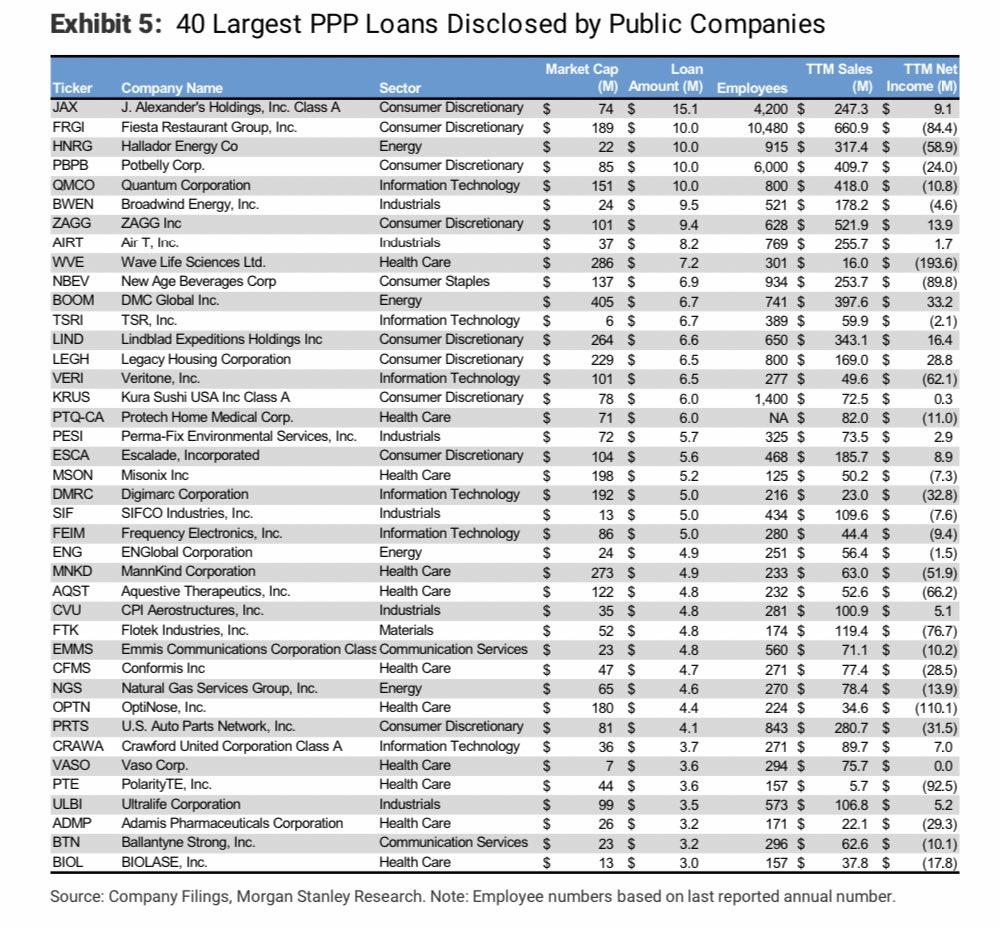 One especially large organization that supposedly received millions in bailout loans was none other than Harvard.

Yesterday we reported that as part of the $2 trillion CARES Act, $14 billion was set aside to support higher education institutions – ostensibly those without billions already in the bank. Harvard, which has a $40 billion endowment, was set to receive $8.7 million in federal aid. Harvard points out that at least half of which has been mandated for emergency financial aid grants to students, which we would note that they can cover themselves

Hilariously, Harvard’s Crimson pointed to the risk that their endowment could shrink due to market volatility – maybe it will request a bailout next too? – and that the University’s financial situation is “grave.”

None of the made an impression on President Donald Trump, however, who during Tuesday’s Wu Flu briefing, said he plans on asking Harvard University to give back more than $8 million given to them under the CARES ACT.

“I’m going to request it,” Trump told reporters at the White House, singling out the Ivy League school. “Harvard is going to pay back the money. They shouldn’t be taking it.”

“I’m not going to mention any other names, but when I saw Harvard — they have one of the largest endowments anywhere in the country, maybe in the world. They’re going to pay back the money,” the president added.

Asked if he was confident he would be successful in asking Harvard to return the money, Trump said that if the university “won’t do that, then we won’t do something else.” The president also noted the size of the university’s $40 billion endowment.

President Trump: “Harvard’s going to pay back the money… They shouldn’t have taken it.” pic.twitter.com/moC8WrWJ54

Harvard responded shortly after Trump’s demand, saying it did not receive funds through the Paycheck Protection Program and that the school is committed to using all of the funds to cover financial assistance to students.

“Like most colleges and universities, Harvard has been allocated funds as part of the CARES Act Higher Education Emergency Relief Fund. Harvard has committed that 100% of these emergency higher education funds will be used to provide direct assistance to students facing urgent financial needs due to the COVID-19 pandemic,” Harvard spokesman Jonathan Swain said. Again, it was unclear how said funds were so critical to the Harvard educational system – which charges $70,000 a year (for video conferences) and has $40 billion in its piggybank – that the college would be unable to provide “assistance” to students facing financial needs if it did not get money that could have gone to some other business that actually needs it.

“This financial assistance will be on top of the support the University has already provided to students – including assistance with travel, providing direct aid for living expenses to those with need, and supporting students’ transition to online education,” Swain added.

So, basically, bailout funds that are footed by the US taxpayer – in the form of trillion in new debt that will be repaid by all Americans, are now going to poor Harvard students. Wait, did we say “poor” Harvard student? According to the NYT, the median family income of a student from Harvard is $168,800 (95 percentile), and 67% of students come from the highest-earning 20% of American households. About 15% come from families in the top 1% of American wealth distribution.

Harvard is just one example of the thousands of companies which used their banker connections to get to the front of the line in getting “much needed” stimulus funds, even as millions of small business are waiting to this day for their loans.

“I will comment there have been some big businesses that have taken these loans. I was pleased to see that Shake Shack returned the money,” Mnuchin said. “The intent of this was not for big public companies that have access to capital.”

Mnuchin also said he wanted to give companies the “benefit of the doubt” by assuming they didn’t understand the requirements but warned of consequences for large businesses that take advantage of the program. Asked to expand on what those consequences could be, Mnuchin did not provide any specifics.

“We’re going to put up very clear guidance so that people understand what the certification is, what it means if you are a big company,” Mnuchin said.

Some have called for reform to the program, run by the Small Business Administration, in order to ensure that the funds go to small businesses in need.

The good news is that so far there has been little rampant fraud as some feared. Instead, the crony capitalism that the US has become so famous for was on full display, and instead of bailing out the poor, the US government – together with the Fed – has once again bailed out those who spend $10 million for their annual private jet maintenance.

In short, nothing has changed.

Tverberg: It Is Easy To Overdo Covid-19 Quarantines