Market Stalls, Is The “Bear Market” Rally Over?

Market Stalls, Is The “Bear Market” Rally Over?

That’s the question we have been discussing over the last few weeks. So far, most of it has played out exactly as expected by turning previous “selling panic” into a “buying rush,” and convincing a vast majority of investors the “bull market is back.”

I get it. The market has rallied 27% from its lows after falling by 35%. From sheer “panic” to unadulterated “exuberance” in four weeks. However, investors are still down 12% for the year.

As we discussed in “The Revenant,” this is what you should have expected:

“Bob Farrell, a legendary investor, is famous for his 10-Investment Rules to follow. Rule #8 states:

Dow Theory also suggests that bear markets consist of three down legs with reflexive rebounds in between.”

As would be expected, the “Phase 1” sell-off was brutal and set up the “reflexive bounce.”

“For many individuals, they will ‘feel like’ they are ‘safe.’ Such is how ‘bear market rallies’ lure investors back in just before they are mauled again in ‘Phase 3.’” – March 14th.

Note the date, which was well before the March 23rd lows.

A month later, and I am overwhelmed with emails telling me the “bull market is back.”

But I tend to agree with Victor Adair of Polar Trading on this point:

“Massive monetary and fiscal stimulus in March and April will ‘counter’ the deflationary surge to some extent, but it’s not a one-for-one ‘offset.’ The deflationary impulse will continue and will be pervasive and enduring. While equity speculators have been BTD lately, the bond market, commodities, and FX have been skeptical.

I agree with folks who say that the Fed kept monetary policy way too easy for way too long. It encouraged way too much leverage everywhere. Now leverage is being punished, and the Fed is riding to the rescue. I guess that leverage keeps getting punished, and reduced, despite the Fed’s best efforts.

We’ve seen a bear market rally in the major stock indices since the March 23rd lows. However, the economic damage is underestimated at this point, and as it becomes more evident we will see a test of the lows.”

Regardless, in the short-term, the markets remain incredibly overbought and extended after the run from the lows. As noted last week:

“On a very short-term basis, the previous ‘deep oversold’ condition that provided the ‘fuel’ for the rally has been reversed. Also, all primary ‘overbought/sold’ indicators are now fully extended into overbought territory.”

The rally has run into key downtrend resistance, and remains close to triggering a short-term “sell signal” from overbought levels.

If the markets can rally more on Monday and break above the downtrend, the 61.8% retracement level becomes a viable target. Above that resides the 200-day moving average. Both levels are going to provide formidable resistance to a move higher.

Such is particularly the case considering the avalanche of exceedingly negative data coming over the next several weeks from earnings to economics.

On Tuesday, I did a deep dive into S&P earnings: 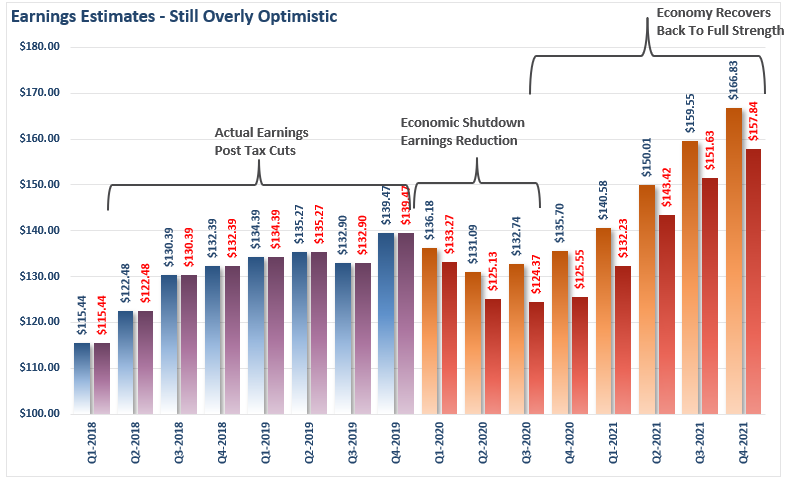 But if you are chasing the market currently, this is what you are “buying into.”

As I discussed with our RIAPro Subscribers (30-day Risk-Free Trial) last week, the ingredients for a bull market are still missing.

“Bear market rally: It’s a big bounce, indeed, but that is what it is. A rally in the context of a bear market that began on February 19th. The fact that we are coming off the best two weeks for the Dow (+15.2%) since 1938 (a huge recession within the Great Depression) just about tells you all you need to know.

The market has certainly ‘ripped’ off the March lows, but there is still quite a bit of pain out there. The Russell 2000 index has only recouped one-third of its loss and is down 28% from the peak.” – David Rosenberg

Also, the advance-decline line and the number of stocks trading below their 50- and 200-day moving averages are still incredibly weak.

“The bear market is intact, even after the S&P 500 equal-weight index has staged a half-way comeback, it is down 21% from the February highs.

I recommend a read of the FT column titled Mind the Gap Between the Markets and the Real Economy. That’s the view from the stock market lens. A very bipolar market with several key segments still deeply injured. There is no durable rally you can count on without the banks participating, that much I do know. With small-caps being the true leading economic indicator, they remain entangled in a bear market; too many people are getting fooled by the mega-cap growth stocks (with a dominant 22% share of the market cap) carrying the S&P 500 on its shoulders.”

What this all suggests is that “risk” still outweighs the potential “reward” of being aggressively invested in the markets currently.

It is worth remembering in January, and February, as the Fed was flooding the system with overnight liquidity via “repo operations,” we were recommending taking profits and reducing risks.

“When you sit down with your portfolio management team, and the first comment made is ‘this is nuts,’ it’s probably time to think about your overall portfolio risk. On Friday, that was how the investment committee both started and ended – ‘this is nuts.’  Such is why we took profits and reduced our risk.”

I remind you of this point as investors are chasing markets due to Fed liquidity, but as we saw in early March, the Fed’s “invisible hand” is not infallible.

The risk/reward ranges remain unchanged for the week as the market didn’t change much.

“Friday’s close brings the 61.8% retracement level AND the 200-dma into focus as the next resistance levels. The upside in the market remains limited to 4.5% to 7% currently. (This is certainly nothing to sneeze at, considering such would be regarded as a decent year’s worth of returns. That just shows how skewed things are currently.)

The downside risk ranges are a bit more disappointing.

From an optimistic view, a reopening of the economy, a virus vaccine, and an immediate return to low single-digit unemployment rates would greatly expand the bullish ranges for the market.

However, even a cursory review of the data suggests a more “realistic” view. The economic damage is going to be with us for a while. Until earnings estimates are revised substantially lower to reflect the ‘actual economy,’ I have to presume the relevant risks outweigh the current reward.”

We continue to remain long our reduced equity exposure and have been buying undervalued opportunities over the last few weeks. However, we are also balancing that equity exposure with offsetting hedges and a larger than average level of cash. We also have been increasing our duration in our bond portfolios as well as interest rates will continue to head toward ZERO this summer.

Just remember, when the market does bottom, there will be no one wanting to “buy.”

We aren’t there yet.