While the culprits behind last week’s historic oil plunge to a negative $40/barrel have yet to be conclusively identified, with some pointing fingers at US retail traders, while others blaming tremendous losses in Chinese structured products, one clear usual suspect is the USO, the largest oil ETF and the preferred crude oil investment derivative for thousands of retail investors everywhere. As Bloomberg’s Laura Cooper writes, oil trading negative last week brought to light the risks inherent in ETF’s easy liquidity: “while the market appears to be viewing the USO episode as an outlier, proof that funds can become unhinged from their benchmark leaves risk assets exposed.”

Of particular interest remains the composition of USO’s WTI futures holdings, with some speculating that the nearly 100,000 barrels held for May delivery may have precipitated the liquidation wave observed last Monday. Well, as it turns out, the CFTC data was actually stale, because as Bloomberg writes this morning, the USO wasn’t holding May WTI futures last Monday as it began rolling its underlying assets to June futures contracts in early to mid April – by construction to avoid trading complications near the date of contract expiry.

Even so, the tumble in both May WTI and USO quickly became a mutually reinforcing – and self-fulfilling – prophecy, and as the June price tumbled towards zero as May collapsed, the risk of liquidation from a negative NAV prompted the fund to take the unprecedented step to change its structure to lessen sensitivity to the moves and shift its mandate for future flexibility.

The chart below courtesy of Bloomberg summarizes how the USO – which historically only held the forward month leading to much pain during times of contango when the USO suffered major losses as it rolled its contract into a more expensive one – changed its composition in the past three weeks, through late Friday. 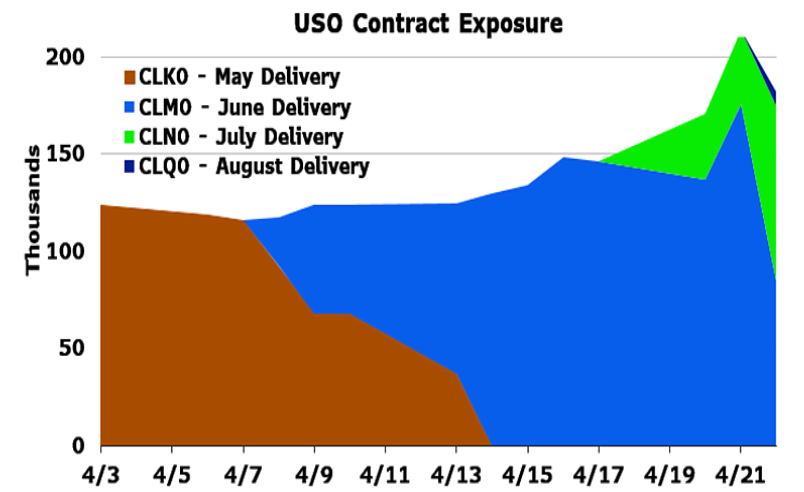 These color-coded changes in the USO’s exposure to carious WTI contracts reflect the ETF’s ongoing near-death experience as the fund’s managers scrambled to prevent it from going negative – and liquidating – by dumping the fund’s traditionally extensive exposure to the front, June contract month which – if last Monday’s is any indication – would go negative next.

Then, in the latest update published this morning, the USO announced it was getting out of the June WTI contract altogether, rolling out of the June contract on April 27, 2020 through April 30, 2020, well ahead of the scheduled roll out which was supposed to take place on May 5-8th, while adding to other, longer-dated contracts. And as it sells June, this is what the USO is buying as per the latest 8K:

With USO manager, USCF, saying it will roll the current portfolio positions into the positions described above over a three-day period with approximately 33.3% of the investment changes taking place each day on each of April 27, 2020, April 28, 2020, and April 29, 2020, that explains why the June WTI contract is tumbling this morning as traders frontrun the USO selling. 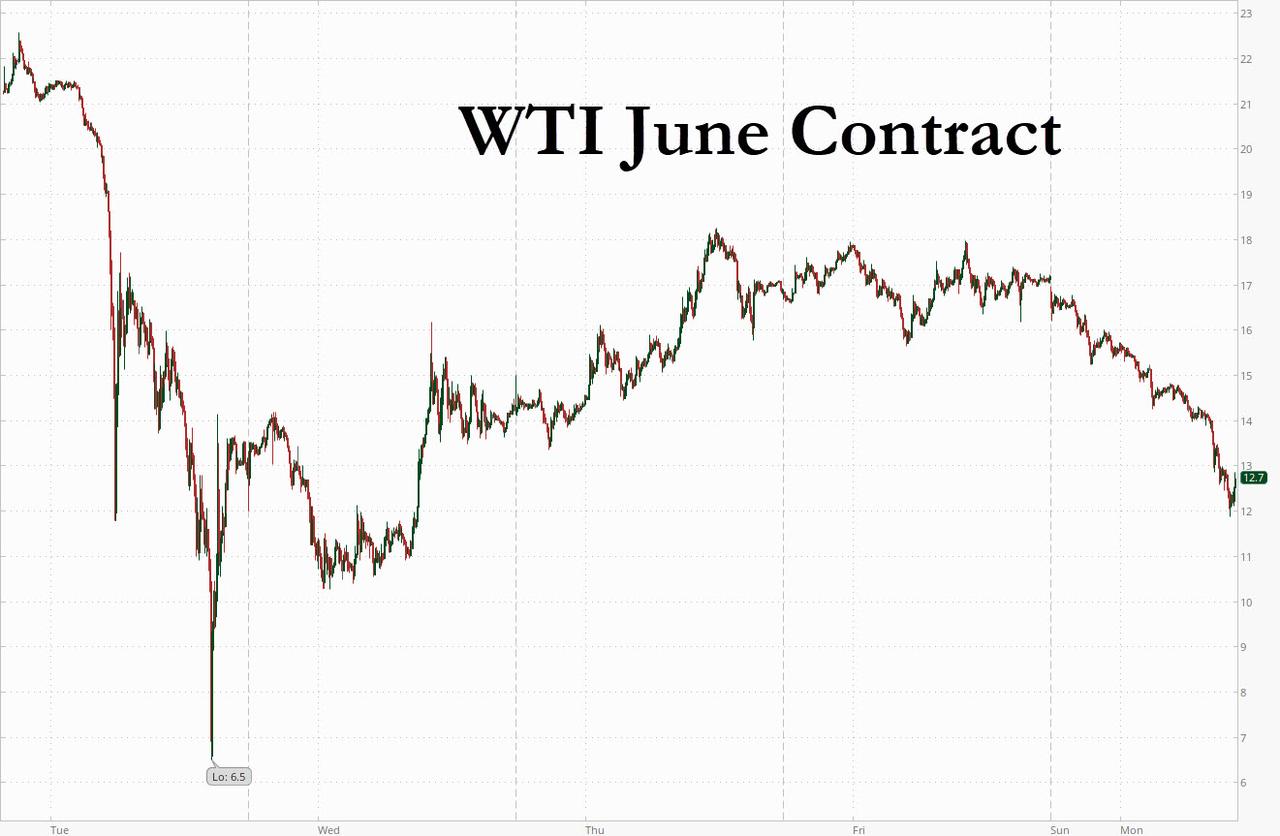 It’s not just WTI – June Brent also fell as much as 7% to take it back below $20/bbl. And unlike worst of last week’s bloodbath, the pain was also felt further along the curve, with CL3 down 9.1%, as traders now are frontrunning future USO rolls, while the continued pumping into a market which will run out of global storage as soon as 3 weeks from now, is certainly not helping. 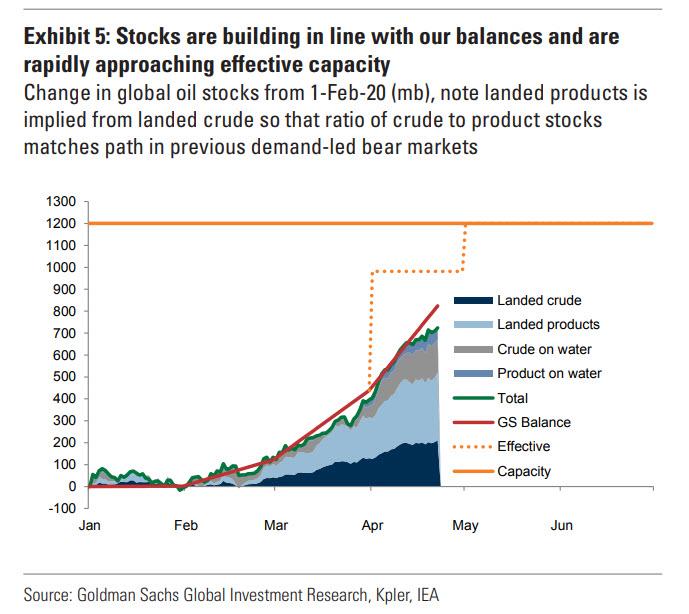 Looking ahead, Cooper speculates that USO is likely to shift back to 100% front-end contracts once the ‘exceptional market conditions’ ease, but last week’s events brought to retail participants’ light the negative carry paid in perpetuity by crude-tracking funds, rolling over at higher price much of the time.

Meanwhile, as Bloomberg ETF strategist Eric Balchunas writes, volatility in commodity markets is still fueling the rise of sector-specific ETFs with April on track for the third-best month in past six years. But, as Cooper concludes, one has to wonder whether the cracks revealed in exchange-traded products that offer oil exposure “will result in cratering ahead.” One look at the surge in USO short interest should answer that question. 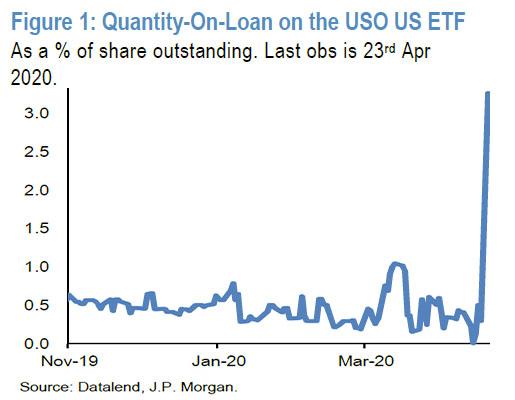 How to Build a Professional Wardrobe On a Shoestring Budget

“I Find It Very Troubling” – Most Americans Lack Savings