Summary: A weaker dollar and rising Nasdaq futures on Alphabet’s Q1 update lifting the mood in Asia trade. The MSCI Asia Pacific index set to enter bull market territory after rebounding 20% from March lows. KOSPI 0.86%, Hang Seng 0.73%, ASX200 +1.27% at the time of writing. This into the FOMC tonight, who are clearly expected to keep the party alive. 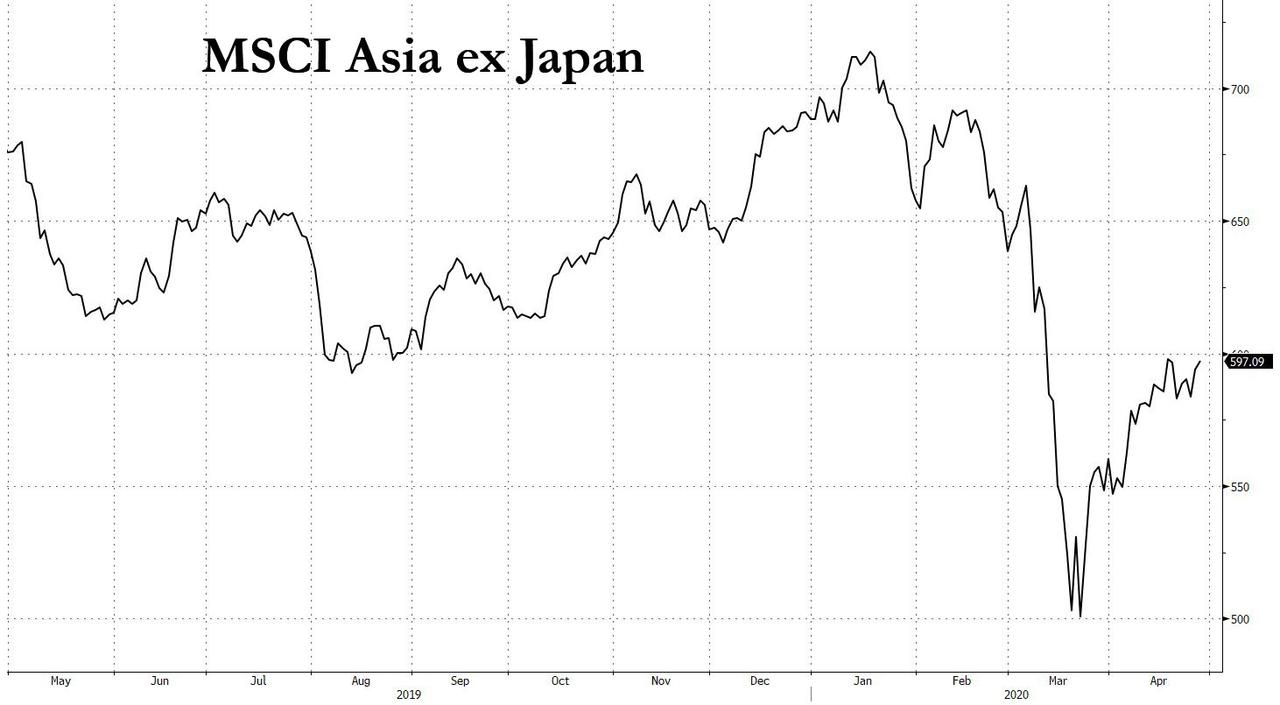 After yesterday’s consolidation session and a weak lead from Wall Street overnight, Aussie stocks are firmly higher today rising in tandem with US futures and PM Scott Morrison’s indication that re-opening is “not too far away”. The big four banks also rebounding after being sold off earlier this week contributing to index gains. In concert with the move higher in equities and heightened risk appetite, the AUD remains on a winning streak backed by central bank liquidity that has vaccinated volatility. Having risen 7.47% vs. the US dollar in the last month the AUD is back sitting above US$0.65. As we wrote last week, which proved to be premature, for the AUD that as a global risk proxy has bounced hard in recent weeks shrugging off the collapsing data and looking towards the recovery, as risk rolls over the currency is primed for disappointment. Given the recovery vs. reality narrative remains intact, although vulnerable at these levels the turn lower will only materialise once that narrative peaks and risk assets re-join the real economy outlook.

Alphabet’s after market earnings release has also helped brighten the mood in today’s Asia trade, despite no guidance on the incoming revenue crunch over coming quarters. However, in the current environment where the market trades primarily on hope, a mega-cap stock and bellwether for big tech and the cyclicality of advertising spending beating expectations is all that is needed to fuel the fire. Even though the real shock to earnings will only show up in subsequent quarters and the visibility remains murky, particularly given the lack of guidance.

Australia/China relations look to be in the firing line as Australia treads a fine line between reliance on China as the number one purchaser of goods and services exports, and supporting diplomatic allies on the global stage. The share of exports to China, both goods and services, relative to GDP renders the Australian economy one of the most China dependent economies globally. More than 30% of total exports go to China, so it goes without saying should the threats from Chinese officials to stage a consumer boycott on Australian exports become real, there would be a drag on GDP growth and the post COVID-19 recovery. Particularly as the domestic consumption outlook will remain pressured via dislocations in the labour market and high levels of household debt.

AU CPI for Q1 picked up substantially – the headline reading now at the highest level in 6 years, leading to underlying inflation now sitting at the highest level since Q4 2015. Most notable was the uptick in food prices as retailers take advantage of the rush to hoard and panic buying heading into lockdowns. However, moving forward the focus turns to the outlook for inflation which remains pressured and well below the RBA’s 2-3% inflation target, with deflation a key risk. Oil prices have collapsed and demand has experienced a cliff drop as lockdowns have remained into April with panic buying easing, along with the labour market deteriorating

Greta Thunberg Enraged After Climate Strikes “Achieved Nothing”, Has Yet To Visit China