We nearly sprayed Red Bull all over our screens last night when we stumbled across a New York Times story with the headline “‘Murder Hornets’ in the U.S.: The Rush to Stop the Asian Giant Hornet”.

Americans who were alive all the way back in the late 1990s (as well as the mid-2010s) probably recall the panic that erupted over the rise of the ‘africanized’ honeybee. The hyper-aggressive bees were reportedly wreaking havoc in South America while moving inexorably northward toward Texas. 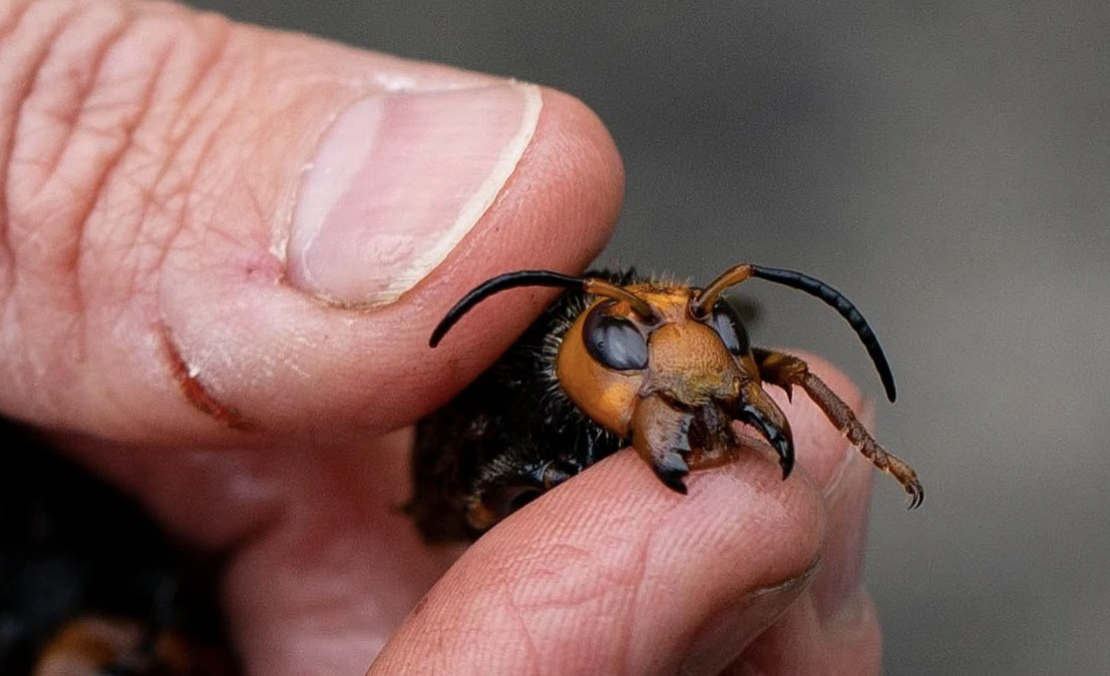 Whatever happened next, nobody really remembers: the bees apparently gave up, or joined the Wu Tang Clan. We’re not really sure.

But as North America and South America struggle to suppress SARS-CoV-2, it appears a new breed of ‘killer bee’ has arrived – this time from Asia (Japan, to be exact).

The Asian Giant Hornet – the Murder Hornet’s government name – is much larger and significantly more aggressive than its North American cousins. Queens can grow to be more than 2 inches wide. And the soldiers posses powerful venomous stingers. Only a handful of the bees have been officially cited in North America over the last year. But several reports of beehives being ‘plundered’ suggest swarms of the hornets might be active in the US.

One beekeeper who went to check on his hive one day only to find the entire colony had been brutally murdered. The heads of the soldiers had been seemingly twisted off their thoraxes and left behind as evidence of the attack. The beekeeper was stunned. In his decades of experience, he had never seen anything like it.

There was only one likely explanation.

In his decades of beekeeping, Ted McFall had never seen anything like it.

As he pulled his truck up to check on a group of hives near Custer, Wash., in November, he could spot from the window a mess of bee carcasses on the ground. As he looked closer, he saw a pile of dead members of the colony in front of a hive and more carnage inside – thousands and thousands of bees with their heads torn from their bodies and no sign of a culprit.

“I couldn’t wrap my head around what could have done that,” Mr. McFall said.

Only later did he come to suspect that the killer was what some researchers simply call the “murder hornet.”

Since the attack, scientists in the US have begun a full-scale search for any evidence of murder hornets. Should the invasive species be allowed to populate, the risks to our ecosystem are surprisingly high. Murder bees could wipe out the population of most North American honeybees.

For people who don’t understand how nature works, this NYT story explains how bees are essentially the foundation of the food supply chain because they help pollinate crops.

Since two Murder Hornets were discovered in Washington State not far from the ravaged hive, scientists are starting their search in the Pacific Northwest.

Mr. McFall still is not certain that Asian giant hornets were responsible for the plunder of his hive. But two of the predatory insects were discovered last fall in the northwest corner of Washington State, a few miles north of his property — the first sightings in the United States.
Scientists have since embarked on a full-scale hunt for the hornets, worried that the invaders could decimate bee populations in the United States and establish such a deep presence that all hope for eradication could be lost.

“This is our window to keep it from establishing,” said Chris Looney, an entomologist at the Washington State Department of Agriculture. “If we can’t do it in the next couple of years, it probably can’t be done.”

The NYT describes the hornet’s distinctive look as resembling a caricature of Spider-Man’s mask.

Beyond its size, the hornet has a distinctive look, with a cartoonishly fierce face featuring teardrop eyes like Spider-Man, orange and black stripes that extend down its body like a tiger, and broad, wispy wings like a small dragonfly.

Mr. Kornelis contacted the state, which came out to confirm that it was indeed an Asian giant hornet. Soon after, they learned that a local beekeeper in the area had also found one of the hornets.

Dr. Looney said it was immediately clear that the state faced a serious problem, but with only two insects in hand and winter coming on, it was nearly impossible to determine how much the hornet had already made itself at home.

Over the winter, state agriculture biologists and local beekeepers got to work, preparing for the coming season. Ruthie Danielsen, a beekeeper who has helped organize her peers to combat the hornet, unfurled a map across the hood of her vehicle, noting the places across Whatcom County where beekeepers have placed traps.

“Most people are scared to get stung by them,” Ms. Danielsen said. “We’re scared that they are going to totally destroy our hives.”

Wildlife officials in Vancouver assigned a local beekeeper the task of exterminating a hive of murder hornets discovered on Vancouver Island in British Columbia. The keeper tried to sneak up on the hive at night, when all the bees would be home. But he made a grave error that triggered what could have been a fatal assault.

Crews were able to track down the hive on Vancouver Island. Conrad Bérubé, a beekeeper and entomologist in the town of Nanaimo, was assigned to exterminate it.

He set out at night, when the hornets would be in their nest. He put on shorts and thick sweatpants, then his bee suit. He donned Kevlar braces on his ankles and wrists.

But as he approached the hive, he said, the rustling of the brush and the shine of his flashlight awakened the colony. Before he had a chance to douse the nest with carbon dioxide, he felt the first searing stabs in his leg — through the bee suit and underlying sweatpants.

“It was like having red-hot thumbtacks being driven into my flesh,” he said. He ended up getting stung at least seven times, some of the stings drawing blood.

Fortunately, the brave keeper was able to eliminate the colony, but not without suffering through the most painful mission of his career.

Jun-ichi Takahashi, a researcher at Kyoto Sangyo University in Japan, said the species had earned the “murder hornet” nickname there because its aggressive group attacks can expose victims to doses of toxic venom equivalent to that of a venomous snake; a series of stings can be fatal.

The night he got stung, Mr. Bérubé still managed to eliminate the nest and collect samples, but the next day, his legs were aching, as if he had the flu. Of the thousands of times he has been stung in his lifetime of work, he said, the Asian giant hornet stings were the most painful.

The mild temperatures of moist woods of Washington State present an ideal habitat for the ‘Murder Bees’ to breed. Entomologists have been setting traps in heavily wooded areas in hopes of catching a Queen looking for an ideal location to start a colony. So far, they haven’t had any luck – which is unfortunate since genetic testing has determined that there have likely been at least two “introductions” – ie established hives” – in the Pacific Northwest.

A genetic examination, concluded over the past few weeks, determined that the nest in Nanaimo and the hornet near Blaine were not connected, said Telissa Wilson, a state pest biologist, meaning there had probably been at least two different introductions in the region.

Dr. Looney went out on a recent day in Blaine, carrying clear jugs that had been made into makeshift traps; typical wasp and bee traps available for purchase have holes too small for the Asian giant hornet. He filled some with orange juice mixed with rice wine, others had kefir mixed with water, and a third batch was filled with some experimental lures — all with the hope of catching a queen emerging to look for a place to build a nest.

He hung them from trees, geo-tagging each location with his phone.

In a region with extensive wooded habitats for hornets to establish homes, the task of finding and eliminating them is daunting. How to find dens that may be hidden underground? And where to look, given that one of the queens can fly many miles a day, at speeds of up to 20 miles per hour?

We suspect the newfound interest in these scientists’ work will hopefully drive more resources their way, since most Americans (correctly) see the bugs as the stuff of nightmares.

Sometimes, reality can be just as funny as comedy.

NEXT UP AFTER MURDER HORNETS

Texas Pipeline Protesters May Face Up To 10 Years In Prison

The Disaster of Zimbabwe’s Price Controls