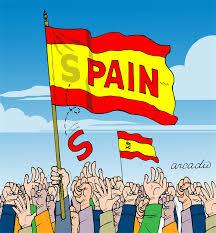 Deficit rule violation is across the board. At least Spain admits it.

As translated from El Mundo, Spain Needs a New Era of Adjustment.

In simple terms, Spain admits it needs another bailout. This is a Mish-modified translation.

An economic collapse is underway. Spain officially sent to the European Union a request for a bailout this year and a new era of adjustments starting in 2021 in order to make sustainable the gigantic jump in public debt.

The forecast is the budget deficit will skyrocket to 10.3% of the Gross Domestic Product this year and for the debt to jump from 95.5% to 115.5% , a level that exceeds the worst …

The rest is behind a paywall, but you get the idea:

Spain admits it is in deep fiscal trouble.

Also from El Mundo (but not behind a paywall):  The Government anticipates a recession of 9.2% and an increase in unemployment to 19%

The budget plan that the Government sent to Brussels last night includes an economic debacle as a result of the crisis that has unleashed the coronavirus: according to its estimates, the Gross Domestic Product (GDP) will collapse 9.2% this year, while the rate unemployment will skyrocket from 14% to 19%.

In addition, the Government now maintains that the recovery will be asymmetric,  in 2021 everything lost will not be recovered.

All the jobs created in the the last four years will vanish. And the recovery will only return to the level in 2017.

Italy is in worse trouble.

In fact, every Eurozone country will be in severe violation of Stability and Growth Pact rules regarding both debt and deficits.

The Eurozone has never really enforced any rules, but it does pressure countries with periodic threats of Excessive Deficit Procedures.

Eurointelligence comments Thinking Through the Details of a Recovery Fund.

In our assessment of the economic impact of the agreed way forward, we know most of what we need to know right now. The European Council has agreed on Angela Merkel’s version, not the coronabond or the Spanish proposal. As FAZ reports this morning, the plan is for the EU to increase its budget capacity from the current 1.2% to 2%, for a period of two to three years. This increase will not come in the form of direct contributions from the member states, but of guarantees. The paper puts the annual volume at €100bn per year, which would be be approximately 0.6% of EU-27 GDP on our calculations. The total borrowed could be in the order of €250-300bn over the period.

If we assume total borrowing of €300bn, half of it in the form of grants, the average macroeconomic impact would be 0.4% of GDP for three years running.

As ever, beware of headline totals. Ursula von der Leyen said last night that the size would be measured in the trillions, not billions. As we scour this morning’s headlines, we find plenty of gullible journalists impressed by that number. We think it is an illusion. So was the eurogroup’s €500bn package, because it conflated into a single round number the ESM’s outstanding capacity plus the estimated lending capacity of two levered funds.

What does that do in comparison to the numbers above?

EU’s Trickery of a Fake MFF

The EU will not enforce any rules, of course. Instead it will respond with magic solutions as it always does.

In a follow-up article, Eurointelligence discussed The EU’s Trickery of a Fake Monetary Fund Facility MFF.

Return of the German Professors

Also consider the Eurointelligence article on the Return of the German Professors on March 24.

We have been waiting for the German professors to wag their fingers, or to threaten legal action against the ECB or national governments. But so far it has been mostly quiet on that front. This morning, however, we saw an article by Otmar Issing in FAZ, in which he argues that emergency was no excuse for law-breaking. He accuses the ECB of monetary financing and says that a mutualised eurobond is illegal unless formally accepted by national parliaments.

Issing’s comment is likely to matter not only only because of his former role at the ECB. He carries enormous weight among German conservatives.

Issing argues that, if countries had followed the EU fiscal rules and built up fiscal surpluses in good times, they would not be in the position to needed a bail-out now.

It is not the role of the ECB to prevent a collapse of national public finances. And Art 125 TFEU, the no-bail out clause, is still there. It says the union must not take over the liabilities of member states, and that member states must not take over one another’s liabilities. Even as advocates of a mutualised eurobond ourselves, we must acknowledge that there is no firm legal basis for it under EU law.

Issing’s article is likely the beginning of a legal discussion about the future course of policy. We saw it during the euro crisis. The legal fall-out from that period is still not over. The German constitutional court has yet to rule on the legality of QE. We expect the next phase of legal arguments to arise before the old one has come to an end.

A huge political battle is brewing.

Spain wants another bailout and Eurobonds, Germany wants neither.

The EU responded as it always does, with magic proposals and fake leverage.

More accurately, view solidarity as a battle between the creditor states and the debtor states.

Italy vs the EU

Italian politician Fabio Rampelli removes the EU flag from his chambers and replaces it with the national one.

If the Coronavirus did one good thing, that was expose the European union for the inept bureaucrats they are. pic.twitter.com/uatMvpUzRS

Please note that Italian politician Fabio Rampelli removed the EU flag from his chambers and replaced it with the national one.

If by any chance you were wondering why the US dollar has been firm despite all the Fed shenanigans, you now know.

Meanwhile, the debate over inflation or deflation continues.

Will it be Inflation or Deflation?

If you believe the answer is inflation, then you do not understand the importance of credit and demand shocks. Click on the link for discussion.