The South African nation which previously wiped out its debt with a historic round of hyperinflation, is trying a different approach this time and is pleading with international institutions to help it eliminate billions of dollars in debt so the country can avoid economic collapse and unlock funds to fight the coronavirus pandemic.

Taking a page out of the Italian playbook, finance minister Mthuli Ncube told the IMF, African Development Bank and other institutions in a letter seen by the Financial Times that without urgent aid to clear arrears owed to official lenders, Zimbabwe faced “domestic collapse.”

As discussed previously, the IMF and other bodies have pledged billions of dollars in emergency loans to help emerging market nations battle the pandemic and shore up locked-down economies… 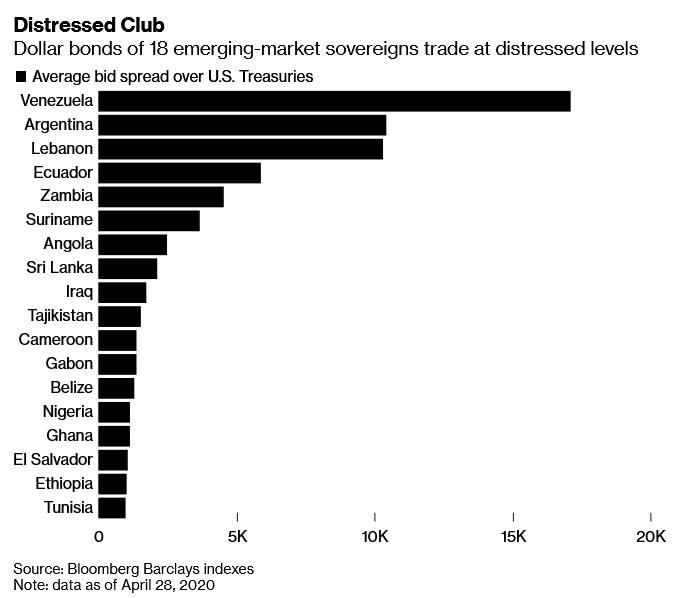 … But Zimbabwe – along with Sudan and Eritrea – is excluded from such funds because of its longstanding arrears. As the FT reports, Zimbabwe is about $2bn behind on payments to official lenders including the World Bank and AfDB, although it has paid off the IMF.

In hope of generating some goodwill, and in a sign of its desperation to access funds, President Emmerson Mnangagwa’s government took responsibility for “recent policy mis-steps” – read cronyism – which have included state payouts to a company led by a close ally of the president. Last year, the payouts to Sakunda, a fuel importer headed by Kudakwashe Tagwirei, were financed with, surprise, money-printing that triggered a currency collapse and a warning from the IMF. A subsidy for gold miners that was financed with money creation also alarmed the IMF when it was uncovered.

“Zimbabwe breaks my heart every day,” a senior official at the IMF said. “I know the path forward for other countries, but the thing that stops it is arrears to the World Bank and the AfDB. Then there’s the bigger issue of politics.”

Ncube, a Cambridge-educated mathematician, was picked from academia by the government in 2018 to fix the economy. But his efforts have been stymied by mismanagement and corruption within the government, an official from an international finance institution said. In the letter, Ncube asked for “urgent and high-level dialogue” on a bridge loan to clear the multilateral arrears, as well as the rescheduling of other overdue debts owed to governments.

In other words, take out debt to repay existing debt. In return for help, Zimbabwe would pledge to halt central bank money printing and “eliminate discretion in the allocation of foreign exchange.”

Which for those familiar with Zimbabwe’s “monetary policy” – which consists of nothing else but printing money – is hilarious.

In response to Zimbabwe’s plea, the IMF official said its hands were tied by its rules about arrears and that Zimbabwe would need to seek support from a bilateral partner, such as Britain. “We continue to engage with the authorities on their challenging economic situation,” the fund said in a statement. As for getting Britain which is facing an unprecedented fiscal shock of its own, good luck getting a “bilateral bailout.”

While Zimbabwe has reported only 34 coronavirus cases and four deaths to date – numbers which are laughably inaccurated – the economic chaos and lack of investment have left the public health system struggling to respond, the FT reports.

The pandemic has struck in the middle of a food crisis in the country, with millions of people facing hunger. A lockdown in neighbouring South Africa, where many Zimbabweans work, has severely reduced the flow of remittances to the country, worsening an already dire economic situation.

And speaking of dire financial situation, nothing new here: this being Zimbabwe, inflation climbed to 676% in March, as the country struggles with its usual hyperinflation demons.

With the economy in shambles, Mnangagwa’s cash-strapped government is relying on private donations to fight the pandemic. Meanwhile, Sakunda has outfitted a hospital in Harare, the capital, to treat coronavirus patients and has secured millions of dollars worth of medical protective gear from China. Perhaps instead of seeking another IMF bailout, Zimbabwe should address its new financial overlords in Beijing: we are confident they will be willing to replace their existing debt with a 100% equity stake over the entire nation.

The Perfidious Effects Of Money Printing

Schiff Blew It – Support For Impeachment Peaked In October