Update (1055ET): As Dr. Mike Ryan of the WHO noted on Friday, thanks largely to the explosion of new cases and deaths in Brazil and, to a lesser extent, Mexico – as well as outbreaks in Chile and elsewhere that have purportedly been aggravated by proximity to Brazil – Latin America has finally surpassed the US as the ‘global epicenter’ of the coronavirus outbreak.

The chart below reflects the change over the past few days, which reflect how Latin America has finally nudged past the US.

Russia, which has also been a major contributor to the growth in global cases in recent weeks, has seen the number of new cases decline over the last 2 weeks, even as testing has ramped up. However, experts believe as many as 1/8th of Muscovites have probably already been infected. In other news, Putin spokesman Dmitry Peskov has reportedly left the hospital, according to Russian newswire Interfax.

And as quarantine measures are lifted in parts of Russia where the outbreak is less severe, government officials are saying that mass vaccination might begin as soon as autumn, provided there’s a usable vaccine by then. It’s just the latest sign that President Putin is taking increasingly heavy handed steps to stamp out the virus in his country, after being one of the first leaders to limit travel with China way back in January.

Mass vaccination against the novel coronavirus in Russia may start already in autumn but this process may take as long as nine months, Director of Russia’s Gamaleya Scientific Research Institute of Epidemiology and Microbiology Alexander Gintsburg said on Monday.

Tass adds that, so far, 44 of the 85 Russian regions can start lifting virus-related restrictions, according to Russia’s Chief Sanitary Officer Anna Popova.

As Japanese PM Shinzo Abe lifts his state of emergency order in Tokyo and the last remaining prefectures where the order remains in effect, the Nikkei Asian Review has published a story claiming that Japan’s “miraculous” (according to Bloomberg) handling of the coronavirus outbreak wasn’t as effective as the official numbers might suggest.

This isn’t the first time Japan has been accused of massaging the numbers to make its outbreak appear less serious than it actually is. Japanese officials excluded numbers from the “Diamond Princess”, and have been criticized for under-counting early coronavirus cases and deaths.

By now, readers should be familiar with the concept of counting “excess deaths”. The FT was one of the first English-language media organizations to apply the concept to British stats, but the Washington Post, NYT and other organizations have followed with their own reports on excess deaths for the US, NYC etc.

During its analysis of recent Japanese mortality data, reporters at Nikkei discovered that Tokyo may have suffered as many as 200 additional coronavirus-related deaths than what’s reflected in the official data, which show just 16 deaths for all of Tokyo. What’s more, this analysis only covers the first five weeks of the outbreak, meaning the undercounting likely continued in April and May. 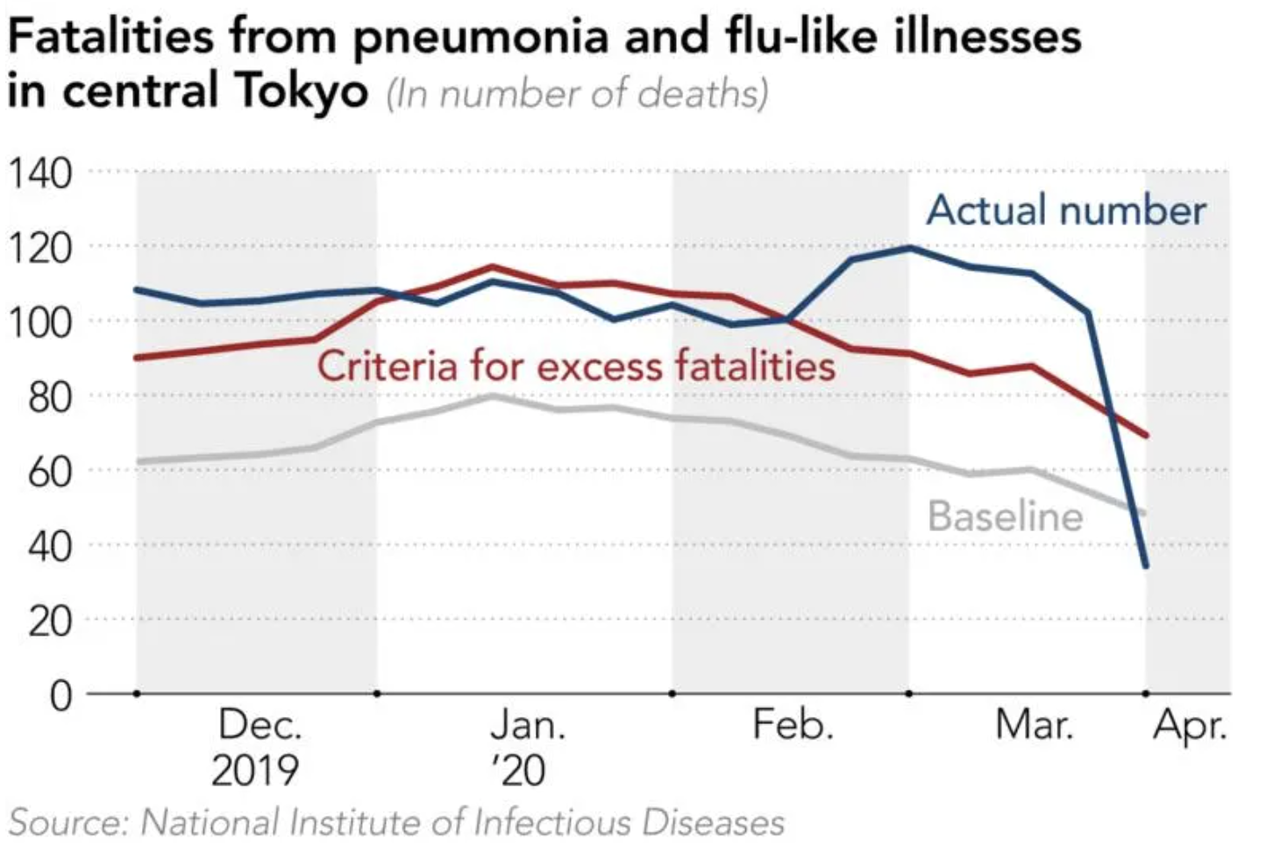 Experts have offered various explanations for Japan’s surprisingly low counts of coronavirus cases and deaths, especially considering Japan’s demographics, which heavily skew older thanks to decades of low birthrates. Some have alleged that “Japanese culture is a form of social distancing” , citing the tendencies toward bowing, preserving personal space and other notably hygienic cultural practices”. Others have claimed that arguments like this leave Japan vulnerable to not taking the virus seriously enough.

What’s more, Abe has become embroiled in a scandal similar to that plaguing UK PM Boris Johnson after Abe’s office sacked an advisor accused of flouting state of emergency restrictions.

To try and save its flailing tourism industry, Spain announced on Monday that it would end mandatory quarantines for foreign tourists beginning July 1, BBG reports.

The worst is behind us. In JULY we will

Spain will stop enforcing mandatory quarantine for foreign tourists from July 1, as the country prepares to reboot its key tourism industry.

In the US, the death toll stands just 700 shy of 100k deaths, with many expecting the grim milestone to finally be reached on Monday after a narrow miss on Sunday.

Meanwhile, confirmed cases in the US are closing in on 1.75 million, while the global outbreak approaches 5.5 million.

And as Americans look for the next source of outrage, media reports have seized on a series of large beach parties in the Ozarks as partiers largely ignored Missouri’s social distancing recommendations to party like it was 2019.

This video is on Snapchat in the Lake of the Ozarks? Unreal. What are we doing? pic.twitter.com/m0qsEQ4KLp

Actress Patricia Arquette squawked that these parties would inevitable lead to the deaths of “hundreds of thousands of people” while others complained – without any hint of self-awareness- about the dangers of “misinformation”.

This “fake news” stupidity is going to kill hundreds of thousands of people.

Here’s a local news report on the parties…

…and readers can find some more reporting on the holiday weekend parties here.

On a relatively quiet day, the biggest story is probably the upcoming press conference involving Dominic Cummings, the senior advisor to BoJo who is facing tremendous pressure to resign after allegedly flouting lockdown restrictions.

Taiwan Warns It Will Shoot Down Chinese Drones Deemed A Threat