Britain’s housing market has taken a serious hit during coronavirus lockdowns. Home prices tumbled the most in a decade in May as consumers were severely damaged by one of the worst recessions in centuries.

Bloomberg reports nationwide home prices fell 1.7% in May, the largest drop since February 2009. In annual terms, prices increased by 1.8% but down from 3.8% in April, as this suggests home prices will likely slump through year-end. 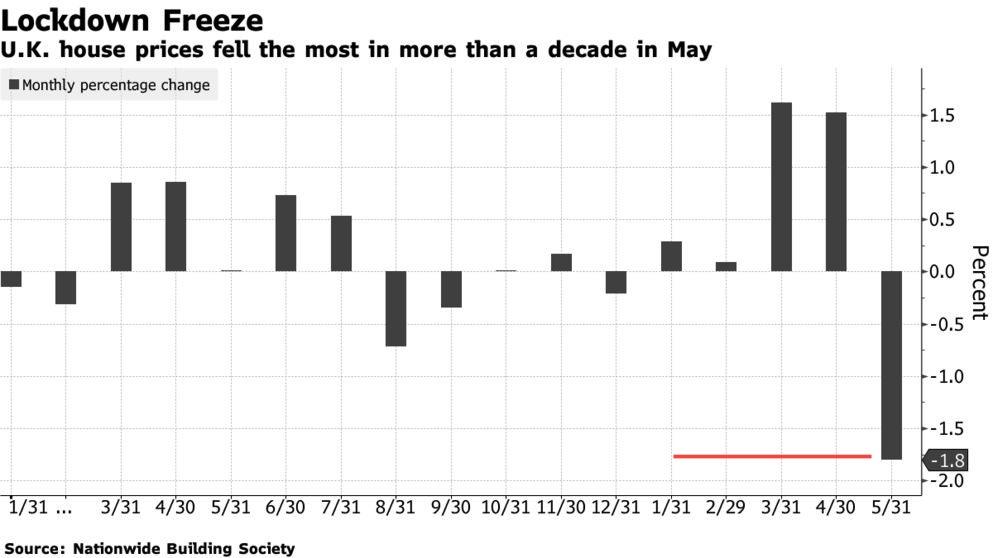 Britain’s government eased restrictions on lockdowns and has reopened some businesses as virus-related shutdowns resulted in the worst recession in 300 years. As for policy response, the Bank of England unleashed vast packages of financial support to cushion the economic blow.

Despite the BoE’s rescue packages, manufacturing continued to contract in May, and consumers remained subdued. Retail sales during lockdowns fell at a record pace, along with consumer credit posted its first YoY drop since 2012.

In April, mortgage lenders approved the fewest home loans on record, with the number of approvals falling to 15,800, the BOE said.

“For now, an unprecedented combination of monetary stimulus, fiscal support, and repayment holidays should cushion and prevent a precipitous and sustained drop in house prices as activity resumes. That buffer will be tested over the coming months as fiscal stimulus is wound back and repayment holidays expire,” Bloomberg analyst Niraj Shah said.

Samuel Tombs, an economist with Pantheon Macroeconomics, said May’s decline in home prices would likely be the start of a slump that could persist through 2020.

“Spending and borrowing naturally will rebound in June, when all non-essential shops will reopen,” said Tombs. “But we doubt that households will spend the cash they have accumulated during the lockdown soon, given heightened job insecurity and lingering concerns about catching the virus.”

A distressed consumer, recession, and virus fears could have sparked the beginning chapters of a housing downturn in Britain.

The End Of NATO?

The Price of Trading Future Obligations for Today’s Benefits

Serious Or Satire? UK Media Urges “Give War A Chance”