Now that most of NYC’s retailers have either already been looted, or have been preemptively boarded up and emptied of merchandise until to ride out the unrest, the same looters who relied on more strategic tactics like working in crews and using drivers and lookouts are reportedly targeting wealthy suburbs like Connecticut and New Jersey. 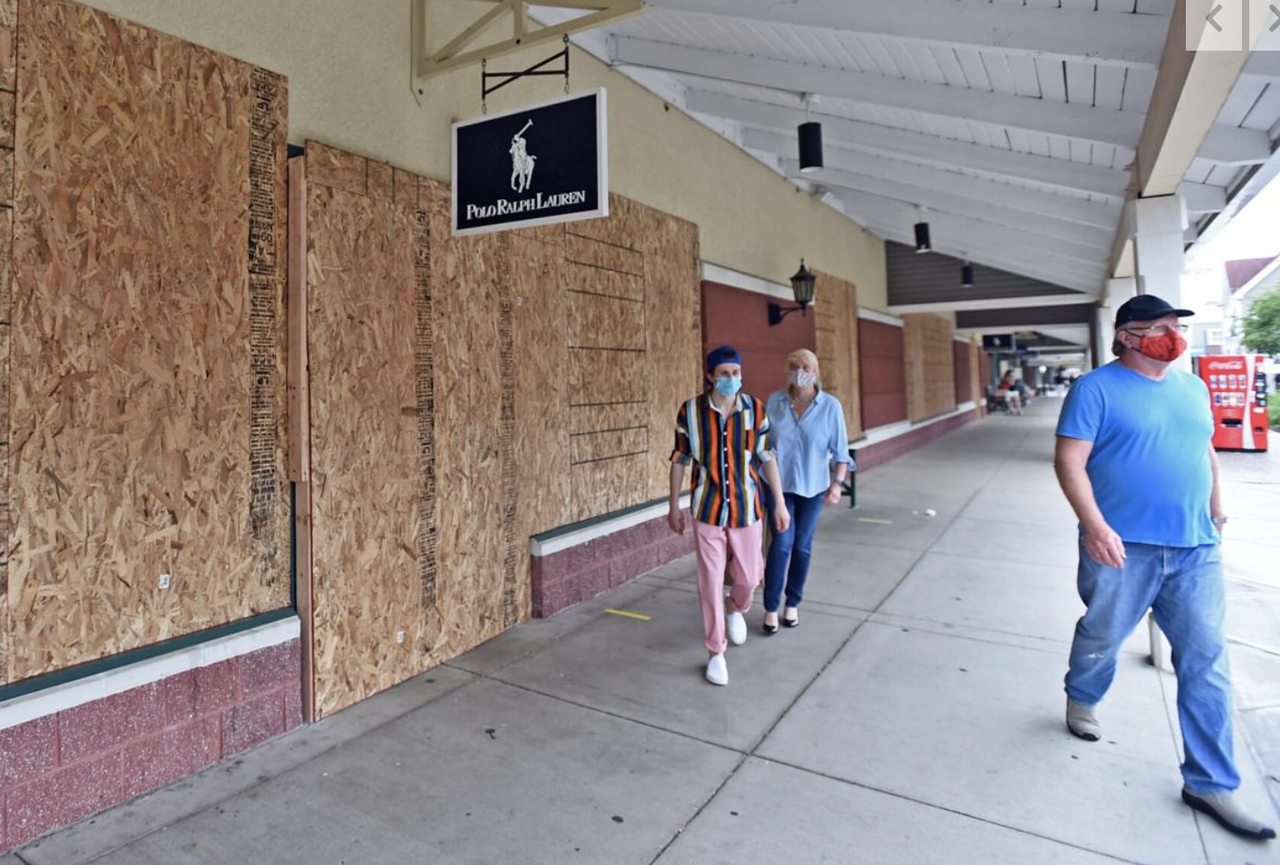 On the advice of state police, retail outlets along I-95 (a critical vehicular artery connecting Westchester and southern Connecticut and the city) are closing and boarding up their stores on Saturday to try and discourage looters, and the potentially deadly confrontations with police that might ensue.

Clinton Crossing Premium Outlets will be closed this weekend after police detected social media posts calling for looters to converge at the premium outlets in Clinton, Conn.

In response to Facebook threats of looting and rioting, Clinton Crossing Premium Outlets will be closed Saturday and Sunday, according to an official of the retail outlet center.

Entrances and exits at Clinton Crossing, a member of the Simon Property Group, will be blocked with Jersey barriers. Some stores, including Polo Ralph Lauren and Finish Line, were boarded up starting Friday morning.

“Based on the credibility of threats and law enforcement recommendations, the decision has been made to temporarily close,” Nathan Ramos, area general manager, wrote in a letter to mall businesses.”…Our goal is to provide a safe environment for tenants, customers and employees.”

Clinton Crossing, off Exit 63, is home to about 70 outlet stores, including the upscale Coach, Dooney & Bourke, Kate Spade New York and Michael Kors, as well as Sunglass Hut and Yankee Candle.

The following message was posted to premiumoutlets.com.

“We are deeply saddened and troubled by the murder of Mr. Floyd and mourn his senseless loss,” it reads. “We stand united for racial equality and pray for the healing of our communities.”

Police aren’t solely concerned about the looting: there’s also the fear that confrontations between looters and police could lead to violence and deaths on either side.

Clinton police are being especially cautious in light of incidents across the country sparked by the death of George Floyd while in custody of Minneapolis police.

There also have been some incidents around the country of riots and looting, leading management and shop owners to take preventive actions, said Clinton Police Chief Vincent DeMaio.

“We’ve been following it since Tuesday, we’ve been monitoring it all along,” said DeMaio.

Meanwhile, a candidate for Baltimore City Council told looters and rioters to “take that mess to Towson” (a suburban area) urging them to light fires and loot stores in the suburbs because Baltimore is still “traumatized” from the Freddie Grey riots.

So if you were planning on hitting the outlets to get your father’s day shopping done early…it’s not too late to just order something on Amazon.

A commentator sharing the video above can be heard at one point saying “this would explain all the police activity up here in Cockeysville yesterday.” Police have been closely monitoring calls for more violence and looting in the suburbs and cities.

It’s just the latest bad news for Simon Property Group, the largest mall owner in America, which just filed a lawsuit against GAP for non-payment of rent. The shutdowns will leave retailers who only just reopened in an even more financially precarious position.