What Will Yield-Curve Control Mean For Equities?

What Will Yield-Curve Control Mean For Equities?

Summary: Yield-curve control has mixed results when it comes to equities. Japan’s YCC policy since September 2016 has not been a success judging from real GDP growth and for Japanese equities which have underperformed global equities. The period 1942-1951 when the Fed had a YCC policy in place suggests a more positive picture for equities against inflation hinting that YCC can work as a crisis tool. However, the key risk related to YCC is inflation risk as our study of inflation and equity returns suggest inflation growth of 4% or higher leads to bad real rate returns for equities.

History tends to repeats itself and the FOMC Minutes have indicated that the Fed is considering yield-curve control which was last used in the 1940s. In the case the Fed hints of yield-curve control (YCC) going the same way as the Bank of Japan (BOJ) introducing YCC in September 2016 and recently Reserve Bank of Australia in March 2020 what would likely be the effect on equities.

In the recent case of BOJ the evidence suggest as a mild positive effect on Japanese equities in local currency relative to global equities. Japanese equities outperform global equities in local currency by 12% from September 2016 to November 2017. Since then Japanese equities have underperformed by 18% and Japan’s real GDP growth is slightly lower after YCC was introduced compared to the four years leading up to its introduction. One potential reason for YCC’s lackluster performance in Japan could be related to fiscal tightening in the years after 2016 relative to the period before YCC reducing public impulse into the economy. 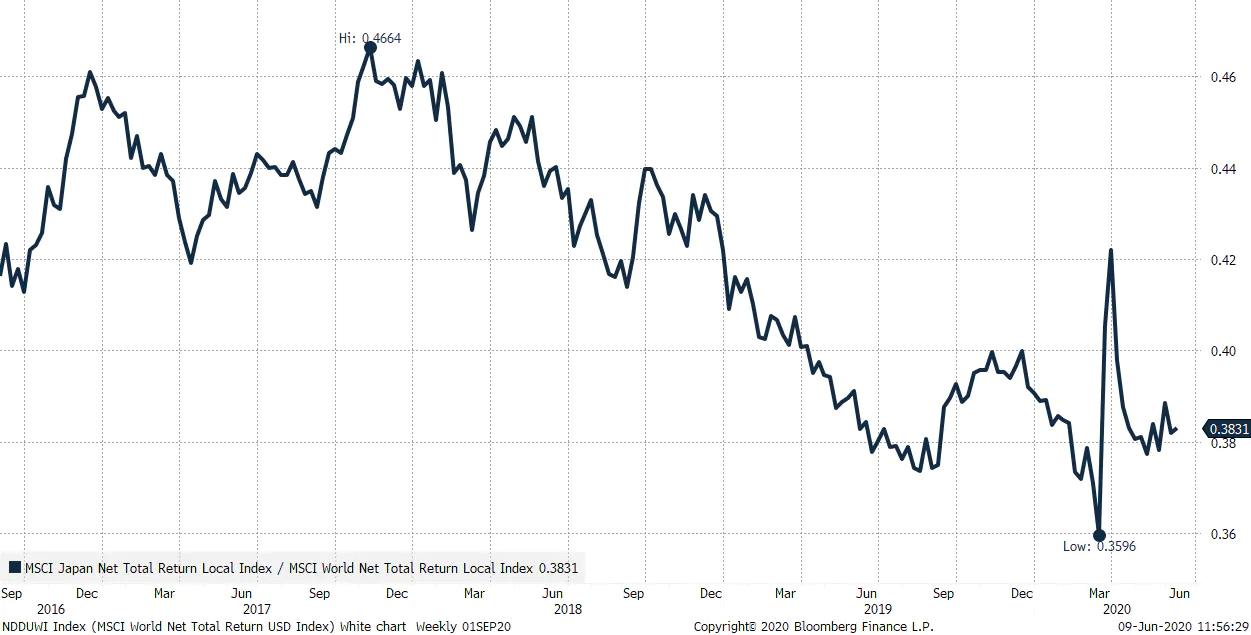 The evidence from the US experiment with YCC in the period 1942-1951 seems much better. US equities deliver a 5.6% annualized real rate return with the years 1946-1949 of high post-war inflation being negative for equities. The period suggests that equities can thrive in a high inflationary and high debt period under YCC but investors should keep in mind that this period only represents one independent sample and that economy has changed much since the 1940s. The reaction in Japanese equities in the year following Japan’s introduction of YCC suggest that we got see a boost to US sentiment on equities from the introduction of YCC in the US. 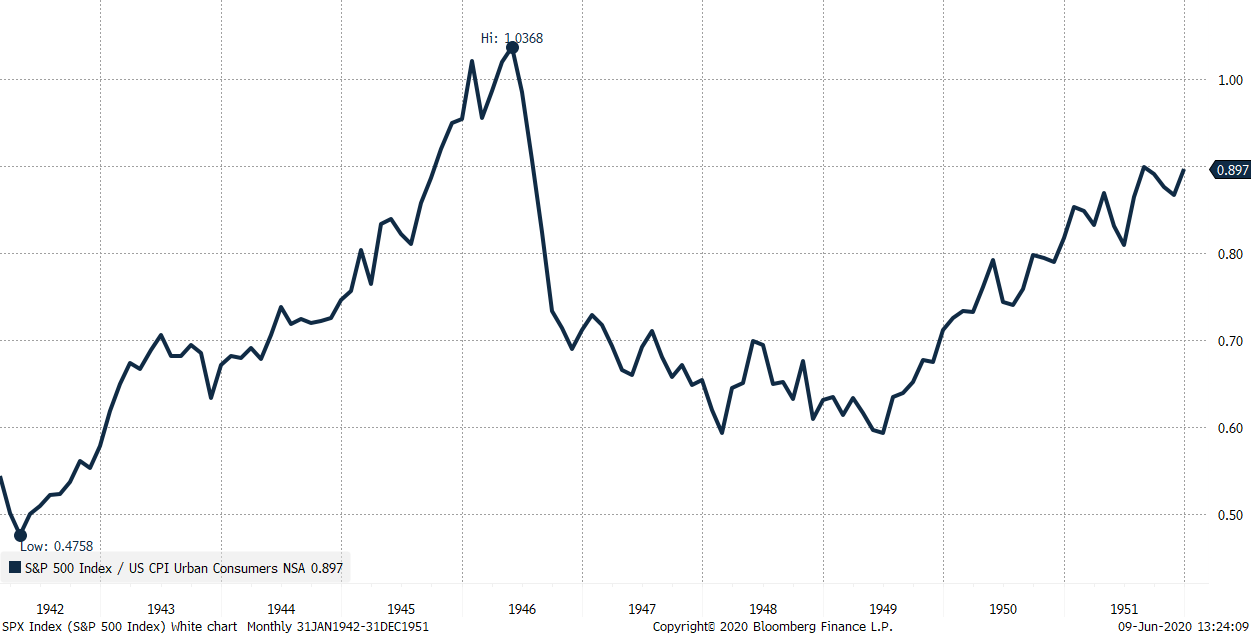 Which sectors will benefit from YCC?

The cap on long-term interest rates will also cap banks’ profitability through an upper bound on net interest margin. However, to the extend that YCC creates growth this will grow loan books and thus market values of banks. Our view is that financials should be avoided in this environment but that growth companies with a large part of their value coming from the future should be overweight as YCC creates a low discount factor for future cash flows. Highly leveraged companies and capital intensive industries such as auto, airliners, steel, real estate, shipping, construction etc. should also outperform in this environment as YCC will set financing rates artificially low.

Inflation is the danger for equities

YCC combined with aggressive US government deficits could suddenly create inflation which history suggests has a tendency to be a wild beast when it escapes its normal ring-fencing. Higher inflationary pressures will not immediately become negative for equities as our analysis from May 2019 of equities and inflation over 105 years suggest. A mild positive inflation shock has historically been associated with positive real returns in equities. It’s actually a large deflationary shock that has been associated with negative real returns. Equities have historically delivered negative real return when inflation has sustained its growth rate above 4%. This is the real danger for equities.

How likely is it that the Fed will introduce YCC? The Fed introduced YCC in March 1942 to stabilize the bond market amid rising inflation expectations due to enormous US war deficits. This time around deflationary forces seem to be more dominant than inflationary forces due to the demand destruction from COVID-19 lockdowns around the world. Fixing the long-term yields will mostly lead to lower monthly purchases of bonds and thus lower growth of the Fed’s balance sheet while sending a signal to the Treasury to stimulate the economy through government deficits without worrying about stability in the bond market. YCC will most likely come and already this year as it’s naturally crisis tool but also an important tool to create inflation and thus dig the world out of its debt mountain. But whether it will be announced tomorrow at the FOMC meeting is more uncertain. Given the current market pricing it’s most likely that the Fed will keep this tool in the box and utilize it if the market destabilizes over the coming months.

The history of US yield-curve control

During World War II concerns over US budget deficits and inflation put upward pressure on long-term interest rates. In an attempt to stabilize the bond market the Fed capped long-term yields at 2.5% and Treasury bills at 0.375%. This operation effectively helped the US government monetize its war efforts. There are two ways to do this. Either the central bank simply buys a pre-determined amount of bonds every months (quantitative easing or QE) or it can introduce YCC which set a yield target which effectively means unlimited purchases of bonds. The findings from BOJ’s operation since September 2016 is that the quarterly bond purchases actually fell after YCC was introduced compared to the QE period from 2013-2016.

US inflation was in 1947 so high that the Fed had to raise the short-term interest rates to dampen inflation pressures but chose to keep the long-term yield cap. However, in 1951 the Fed had to abandon this target as well also called the Fed-Treasiry “Accord” ending the crisis policy during the war and post-war years. Nominal growth was significantly above the long-term interest rates and thus created a tailwind for reducing US public debt to GDP. In 1953 the Fed adopted its price stability policy combined with controlling the short-term interest rates through its bills only policy. In the years that followed public debt to GDP declined and bottomed out during the 1970s.

mRNA vaccines, a primer: How they work, why they’re “cleaner” than traditional vaccines, and why they might prove catastrophic in a rushed coronavirus response

BofA: QE Is Annualizing A Stunning $1.1 Trillion In The Past 4 Months