Despite allowing its economy and schools to remain open during the coronavirus outbreak, Sweden is finding that the incidence of COVID-19 antibodies among its population is still surprisingly uncommon, suggesting that the country hasn’t yet reached the point of “herd immunity”, unlike other European countries which embraced much more drastic measures to stop the spread and the deaths.

Speaking to the nation during an interview on a Swedish radio station, Anders Tegnell, Sweden’s government epidemiologist and architect of its coronavirus containment strategy (a model that Goldman analysts claim wouldn’t work elsewhere in Europe or in the US), noted that the development of herd immunity is taking much longer than expected. Per Tegnell: “the trends in immunity have been surprisingly slow.” He also says “it’s difficult to explain why this is so.”

To be sure, Tegnell noted, there is “always a lag in all such measurements,” and the percentage of the population with detectable COVID antibodies is likely higher today than it was a few weeks ago, when a surveillance test carried out by a private Swedish company found that only 14% of Swedes have antibodies, compared to more than 50% of Italians in some of the hardest-hit parts of Northern Italy.

Critics of Sweden’s strategy have been more vocal lately now that the country’s death toll has surpassed the 5,000 mark, leaving Sweden with a mortality rate well above its Nordic neighbors.

As the country’s mortality rate has climbed in recent weeks, polls have reflected a growing dissatisfaction among Swedes with the government’s handling of the virus, though Tegnell’s approach remains broadly popular.

To be sure, Tegnell has acknowledged that some mistakes were made, and has said if he could do it over, he would have done some things differently, including directing more resources toward protecting the most vulnerable. But he never disavowed his approach, as some English-language media outlets have twisted his words.

For those who don’t understand the concept of ‘herd immunity’, Bloomberg created a helpful illustration. Even readers who think they understand how it works should probably take a look. 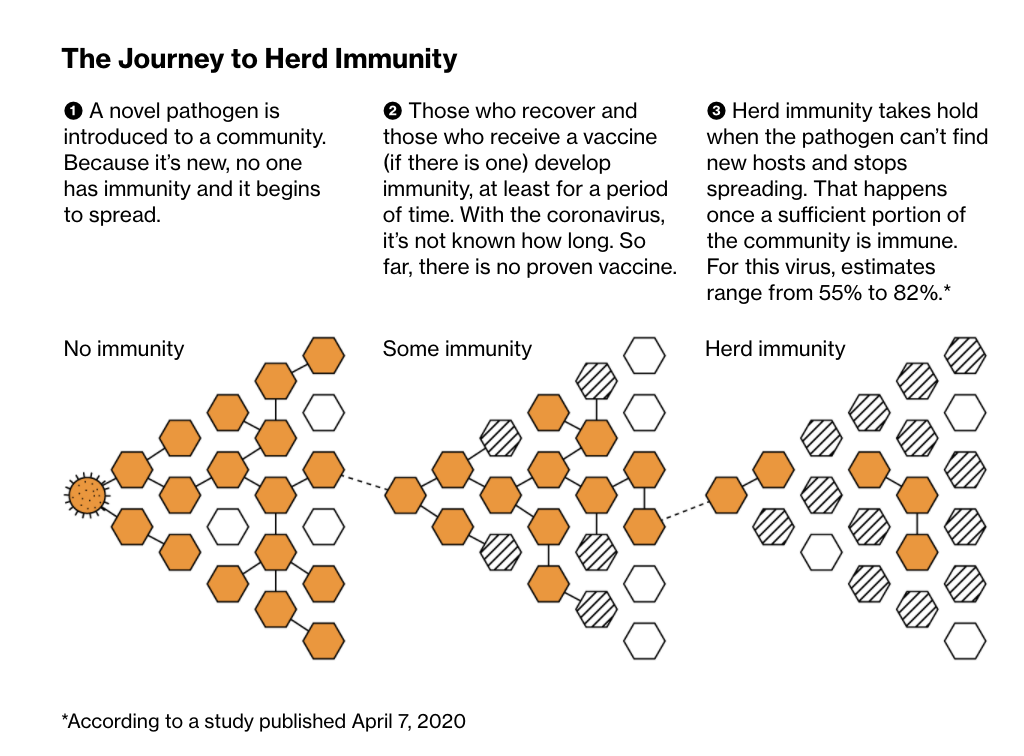 Tegnell and Swedish PM Stefan Lofven have insisted that Sweden’s strategy was the right choice. It was based on an assumption that the virus would be around for a long time – a fair assumption considering we don’t yet have a vaccine – rendering any short-term lockdowns effectively useless.

As the debate around what might constitute a more “sustainable” model for dealing with the outbreak rages, India is finding that even after 2 months of one of the most restrictive lockdowns on the planet, the virus came roaring back as soon as restrictions were lifted. So far, we haven’t seen a similar pattern emerge in Europe. But all of this just serves to remind us how little scientists really know for certain about the virus.