When it comes to bearish market flow red flags, aggressive selling of stock by corporate insiders is traditionally viewed as the biggest red flag – after all nobody knows the prospects for their companies better than the people who run them – followed closely by companies selling stock. The logic is simple: why sell today if you believe you may get a better price tomorrow.The answer is simple: you don’t, and instead you rush to lock in gains afforded by the market today.

In which case, it’s “red flags galore” because as the following chart from Goldman’s head of European Equity Sales, Mark Wilson, shows companies haven’t sold this much stock in a single quarter in… well, forever. 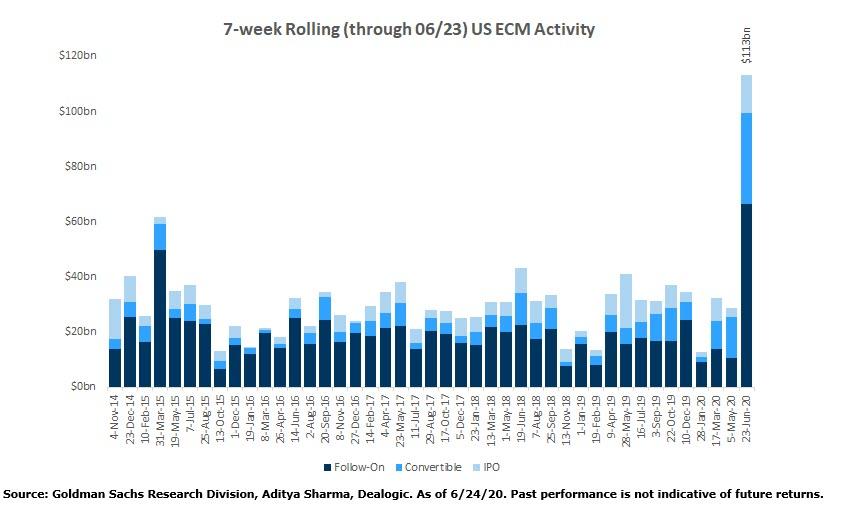 According to Bloomberg data, secondary offerings in the U.S. raised $113 billion in the second quarter, the most on record. The nearly 400 deals that priced this quarter is also the most ever.

As Goldman adds, “we’re about to close out another record month of global equity issuance, with June set to eclipse the recent record set in May; the numbers (>$230b of supply in 7 weeks), and the market’s ability to absorb this sizeable supply, have been impressive (the quantum of global supply vs prior peak periods shown in the 1st chart; US supply vs recent years trend shown in 2nd chart)” 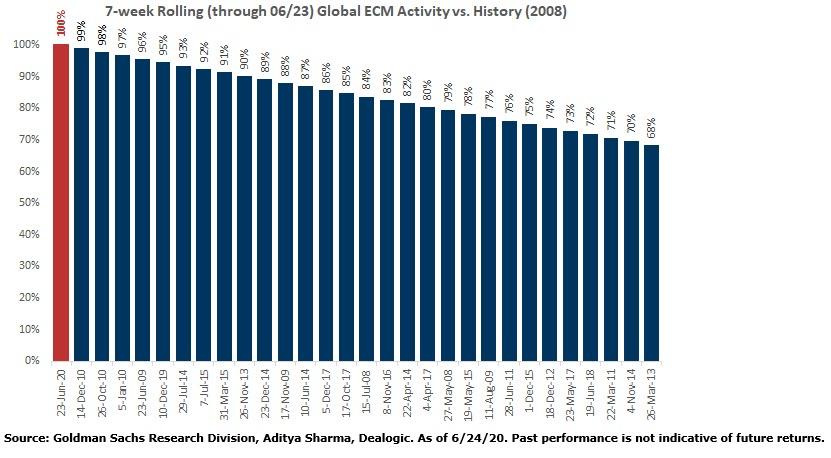 Following up on this staggering pace of equity sales, Bloomberg writes that “the record-high pace of secondary offerings that took hold in the second quarter is poised to continue into the summer” as share sales by U.S.-listed firms and their top holders raised the most money and happened the most frequently of any other quarter on record.

With coronavirus shutdowns creating a sudden need for cash, issuers found an opportunity in a stock market that came roaring back from depths of the selloff in March. The paradox, of course, is that companies dumped stocks – with buybacks largely dormant – to a market dominated by (mostly young) daytraders who were so eager to lap anything up they almost bought an equity offering of worthless stock by bankrupt Hertz, another unprecedented event.

And in recent weeks activity has continued apace, with Bloomberg predicting that this promises big things for the third quarter as Covid-19 continues to rattle the economy. Convertible bond issuance also surged this quarter. Those deals amounted to more than triple the cash raised in the second quarter of 2019 as some companies needing money looked to minimize the impact of dilution while capitalizing on lower rates.

It’s not just companies that have benefited from the unprecedented demand for equities: for bankers, these deals have been a helpful avenue to recoup business lost to the slowdown in initial public offerings and M&A activity.

And all of this was, of course, started by the Fed which unleashed trillions in liquidity, including buying corporate bonds and ETFs – the Fed is now a Top 5 shareholder in some of the biggest bond ETFs…

The @federalreserve has taken over capital markets under the false pretext of “helping the middle class” pic.twitter.com/PiEocURL16

… all under the convenient lie that it is laboring on behalf of the US middle class.

“Eat The Rich”: Davos Beefs Up Security As Protesters Gather