Despite what American and European commentators may think, there really is a deep desire among people to vote for their own sovereignty. And that impulse was on full display last week with the announcement of the results of Russia’s public vote to approve the changes to its constitution.

The final tally put the vote at 78% in favor with a 65% voter turnout for the referendum. These are the most sweeping changes to Russia’s constitution since it was ratified back in 1993, which vested the President with immense power.

And while the final package of reforms differed in one important aspect from the original one – allowing for a president to serve more than two ‘consecutive’ terms – the over-arching theme of the changes was to devolve power out of the presidency putting more power in the hands of the elected representatives in the Duma.

The president’s cabinet is to be drawn from the Duma rather than the appointed by the president, while the State Council has been officially added to the constitution which can implement presidential edicts directly to the regions. In effect, there is now a greater balance (and tension) between these various branches of government as the president loses control over appointing his cabinet but strengthens his ability to bypass the elected parliament.

What was clear at the outset of this process was that Putin was trying to prepare his succession while minimizing the potential for another ‘foreign puppet’ to wield the immense power of the Russian presidency, as it was under Boris Yeltsin.

Putin was looking to retire in 2024, at 71, with an eye of maintaining a strong presence in Russian politics by leading the Security Council, which with these reforms has a more direct role in shaping military and diplomatic policy than it did before.

Back in December I did a podcast with Alexander Mercouris of The Duran where we discussed these potential changes in detail (which pre-dates the changes to the president’s term limit) which I think is important to review at this point since the changes are now law.

No matter what political perspective you come from there will be valid criticisms of these changes seeing the potential for abuse, but the overall arc of them is to make Russia far more resistant to outside interference while reflecting the growing pride of Russians for their home and their surviving the hell imposed on them post-USSR.

And these changes have to be viewed through that lens. In my mind Russia has been in a state of war with the West since late 2013 with the EU’s attempt to fast-track Ukraine into its bosom. That morphed into the Maidan uprising and the subsequent reunification with Crimea and the War to Prevent Donbass Secession.

Putin came to power at the height of Russia’s post-Soviet economic and societal collapse. He knows who was behind it and where, metaphorically, the bodies are buried. He is still making moves which are, at best, incremental changes which are achievable when obvious wholesale changes are necessary.

That’s what a lot of these constitutional changes represent, incremental changes necessary to secure Russia’s near-term future in the context of an infinitely hostile West in the death throes of Empire.

For that reason, they are welcome, if to be distrusted as all power is to be inherently distrusted. And the Russian people understand the nature of the conflict to the degree that they were motivated to make a definitive statement about it.

The response from the western press has been suitably pathetic, leading with headlines which only emphasize the potential for Putin to remain in power until 2036 (at which point he’ll be 83) and the small pockets of resistance to these changes. 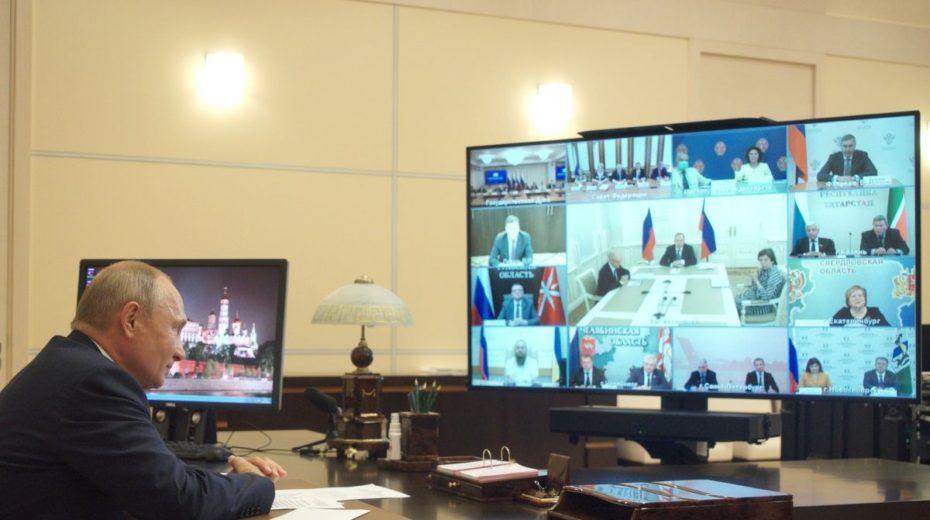 The people crying the most today are the neoliberal/neocons and their intelligence agents who Putin has consistently outmaneuvered over the past thirty years who planned on waiting him out. These changes to the constitution may, in the end, as Gilbert Doctorow suggests, strengthen the presidency in unforeseen ways, but the one thing it does do is ensure that if Russia is to sink into autocracy it will do so on its terms and not on those that openly destroyed it back in the 1990’s.

This is an age of extreme political instability which reflects the poisoned economic foundation those institutions are built upon. All across the West we are seeing massive resistance to the existing order from all sides of the political spectrum. Their anger and frustration have the same genesis while their goals are vastly different.

The powers that be are behind the ones aimed at tearing down the political order in the U.S. while opposing the same drive in Europe. The irony shouldn’t be lost on anyone that a color revolution is underway in the U.S. where the institutional system is vested in a national government with individual states still operating in accordance with that national government.

While at the same time, a loose collection of treaties binds sovereign nations together into the European Union which has almost zero legal authority to enforce its edicts, but which has violently, resisted all expressions of national sovereignty as barbaric.

So, the picture should be very clear what the dynamic is and who is pulling what strings to what end. And this is why there is the kind of howling and teeth gnashing coming from the West over these reforms, they cannot allow to stand any successful expression of national sovereignty lest the serfs get some funny ideas.

But I don’t think either of these dynamics will win out ultimately. The U.S. in its current form may not survive its civil war but neither will Europe go gently into the long night of The Davos Crowd’s intended supranational police state either.

The key to Putin’s success has been his conservative nature which understands that change comes over time. You can’t force lasting change. You have to allow people time to get used to an idea while also be willing to admit some changes made were the wrong ones.

That’s why these changes passed with a near 80% majority. They were overwhelmingly in agreement with public opinion about what Russia’s future should look like and who should make those decisions.

As such Russians stated to the world the other day that the truly dangerous disease infecting the West – unrestrained liberalism bordering on the libertine – will not be public policy going forward.

Join My Patreon if you like strong coverage of Russia’s emerging future. Install the Brave Browser if you want to slow down Google and the Woke-inistas from erasing our history.

CJ Hopkins Exposes The Final Act In ‘The War On Populism’