Is China’s Stock Market Bubble Simply A Massive Reverse-Robin-Hood Scheme To Bail Out The Rich?

Is China’s Stock Market Bubble Simply A Massive Reverse-Robin-Hood Scheme To Bail Out The Rich?

Without a doubt, the Chinese investor is “all-in” again. As we detailed earlier, there has been a massive surge in retail accounts opening margin accounts with margin-trading account balances rising at a faster pace than at the peak of speculative frenzy in 2014/2015…

Five years on from that euphoria, it’s deja vu all over again as millions of ‘home-gamers’ turn back to the markets, under the umbrella of government suggestions to do so… this won’t end well (again).

From everything the state-owned media is telling mom-and-pop Chinese investors, this is all a great opportunity to create wealth and lift up the masses (via mass speculation).

However, as a new research paper publish on VoxChina details, this government-sponsored buying frenzy in stocks is anything but a path to prosperity for the vast majority of China’s citizenry.

Using comprehensive administrative data from China, we document a substantial increase in inequality of wealth held in risky assets by Chinese households in the 2014–2015 bubble-crash episode: the top 0.5% households in the equity market gained, while the bottom 85% lost, 250B RMB through active trading in this period, equating to 30% of each group’s initial equity wealth.

In comparison, the return differential between the top and bottom groups in periods of a relatively calm stock market is an order of magnitude smaller.

In other words, during the period when the Shanghai Composite Index climbed more than 150% before crashing 40%, the three academics found that the rich ended up richer and the poor poorer as an approximately equal RMB250 billion was redistributed from the lower wealth cohorts to the higher wealth cohorts – dramatically widening inequality.

The researchers broke the investors down into four groups based on the value of their accounts, ranging from below 500,000 yuan to over 10 million yuan.

Wealthy investors seems to be fairly good at timing the market, while the poor are suckers. The top 0.5% households added to their exposure during the rally, while the bottom 85% cut their holdings. Shortly after the peak, the wealthy quickly exited the market, selling their shares to smaller households and corporations.

In stark contrast, the study finds that wealth redistribution in calm market conditions is an order of magnitude smaller than that in the bubble-crash episode.

Their key finding then is as follows:

The key takeaway from our study is that the heterogeneity in market timing and stock selection ability between the poor and the ultra-wealthy, while also present in calm periods, is greatly amplified in bubble-crash episodes, when both volatilities and trading volume spike.

In other words – officially-sanctioned (central bank or otherwise) bubbles in stock markets amplify inequality and crush the relative household wealth of the average joe far more than in a more ‘normal’ market environment.

This is particularly concerning given the recent finding that salient early life experiences have long-lasting impacts on individuals’ economic decisions decades later.

Consequently, policymakers and academics must emphasize that while greater stock market participation can be welfare-improving – especially for the poor – active investment by the poor will likely result in the exact opposite.

And, just in case you thought smugly that “us Americans know far better than those silly speculative muppets in China,” think again (even though retail accounts represent a far greater aspect of Chinese markets than in the US)…

As we detailed previously,  the exact same pattern of reverse-Robin-Hood-ism is occurring in US equity markets. The two following charts indicate that as recessions begin, the top 1% begins to sell their holdings, while the bottom 90% continues to try and “buy the dip”.

The first chart shows the top 1% dumping as the market falls entering recession. Of late, we can see that selling has happened in spurts by the top 1%: 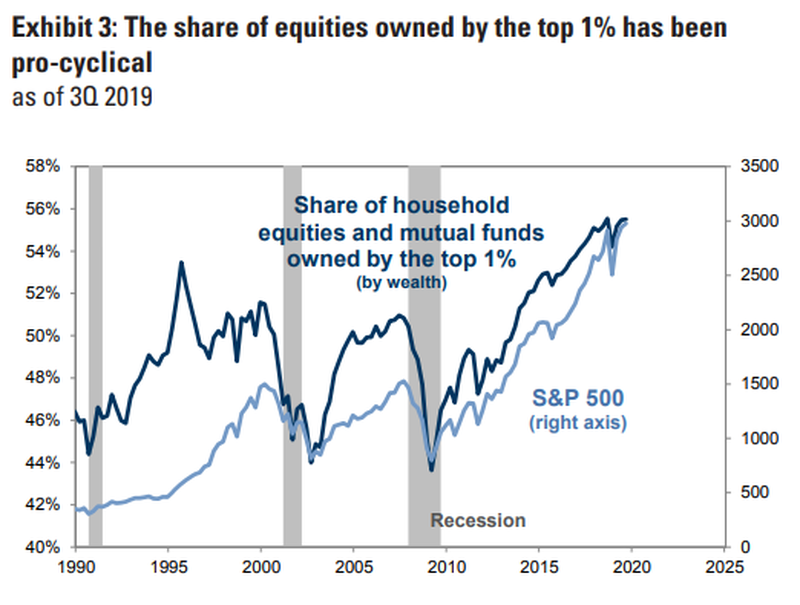 For the bottom 90% it’s just the opposite: the vast majority of unsophisticated retail investor start to chase momentum at the worst possible time, as they buy stocks en masse just as a recession begins, which in turn craters the market. In the Goldman chart below, we can see that the share of equities owned by the 90% jumps just as recession begin. 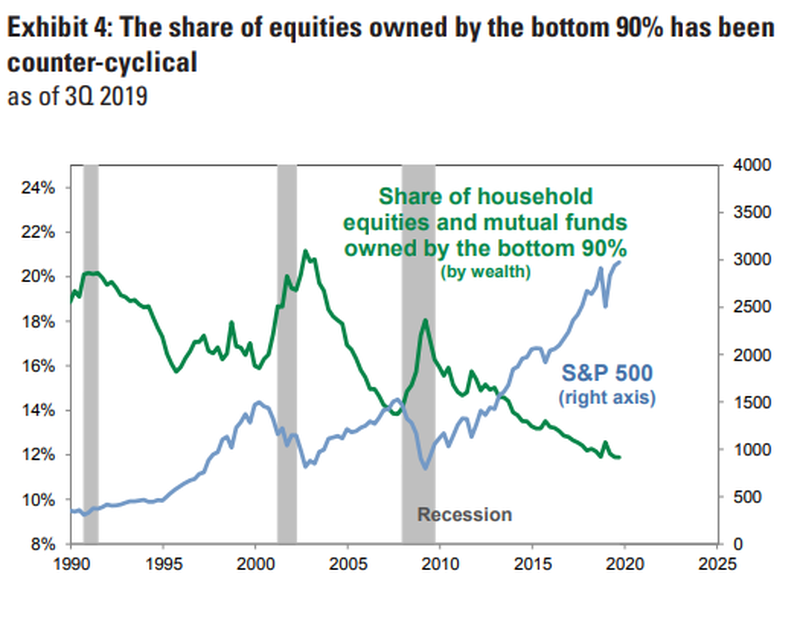 And no – you’re not the one buying at the lows.

In laymens terms, the rich dump their stock to the poor just before the market crashes.

The technical term is “distribution.”

As Bloomberg’s Ye Xie noted so eloquently, “it appears that the boom-bust was one effective way for the poor to be robbed by the rich.”

Do The Democrats Have A Death Wish?

The Bolsheviks Even Want To Tax Your Toaster Oven…