While recent earnings reports from streaming giant Netflix have been a mixed bag, missing badly one year ago when US subs declined and forecasting the first annual drop this decade, then smashing expectations three quarters ago, then beating expectations two quarters ago but disappointing in its guidance, and finally smashing expectations with a blowout first quarter three months ago in which it added a record 15.8 million subs, but once again offering a somewhat weak outlook for a post-covid world, none of that mattered today when the company reported earnings for its first full “post Corona” quarter, when the only thing investors cared about was not whether the company would beat or miss expectations, but rather if Netflix, whose stock price has soared in the past month, remains a pandemic-proof company?

To be sure, the company has been riding a wave of optimism, its stock soaring over 60% this year – putting it in the top 10 for S&P 500 companies, similar to the gains seen by other shutdown beneficiaries Amazon.com and Ebay – and trading just shy of its all time high around $550, with investors pushing the shares to new highs and analysts seeing people download its app in record numbers. And while there’s no doubt that viewership has surged during the Covid-19 lockdowns in the U.S. and much of the world, there are complications: the virus has brought TV and film production to a halt, a situation that may only get more dire for Netflix as the months wear on. But the biggest question remains how many future subs has covid brought to the present? 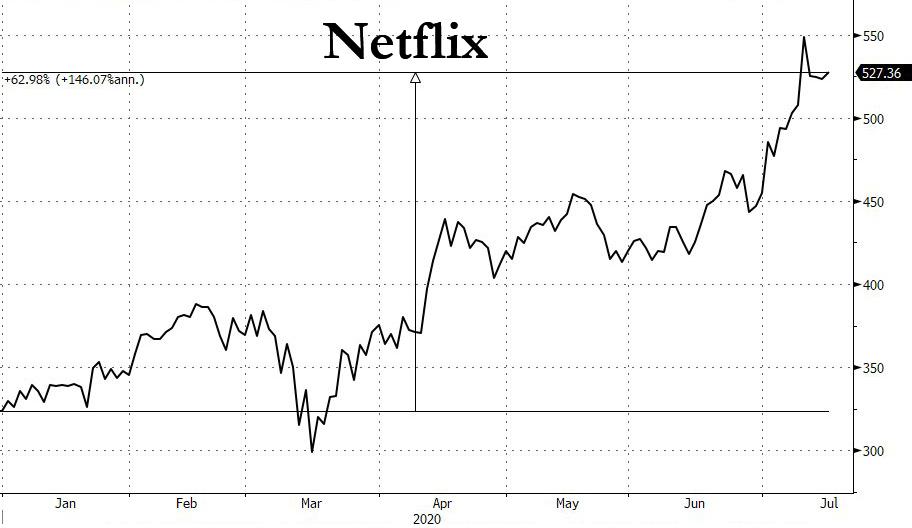 Indicatively, consensus expects 8.27 million new subs this quarter, although the whisper number is well above. As Bloomberg Intelligence writes, “streaming video is on a hot streak since the pandemic struck, and a 63% jump in 2Q app downloads suggests to us that Netflix may add about 10-12 million members in the quarter, well ahead of its guidance for 7.5 million. A steady content stream including titles such as “Space Force” and “Too Hot to Handle” have resonated with viewers, even as rivals have been hurt by production delays.”

If whispers are accurate, this would easily be the biggest second quarter – which traditionally is seasonally slow – in Netflix history.

At the same time, the world’s largest paid streaming service is also facing more intense and cutthroat (or rather cut-price) competition than ever. Comcast’s Peacock platform has been rolling out for a few months, along with the short-form video service Quibi. And AT&T’s big bet on streaming, HBO Max is also up and running now while Disney+ has been a massive hit.

So was Q2 the quarter that would unleash another sharp repricing higher for Netflix stock? Judging by the company’s report, the answer, is that this may have been as good as it gets.

First, the good news which is that in Q2, Netflix did indeed beat expectations of 8.3MM, but fell squarely inside the whisper number:

While the financials are traditionally secondary, the company beat on the top line in Q2 but missed on earnings: 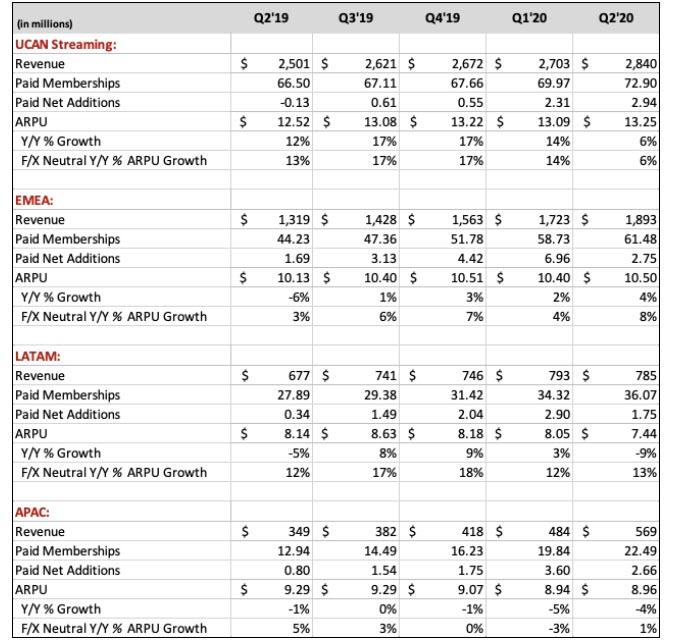 But what sparked a selloff in the stock is the company’s Q3 outlook, which was half of what consensus expected:

And the company’s own forecast with the disappointing Q3 guidance highlighted: 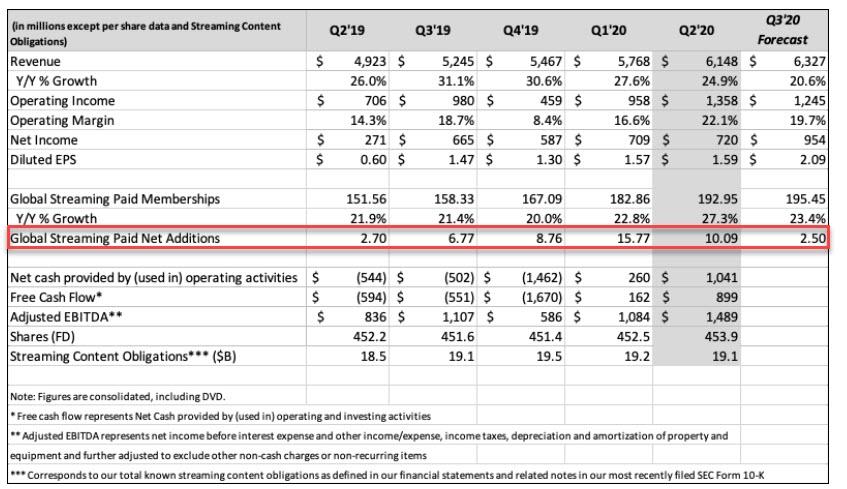 In other words, as many expected, NFLX has merely been pulling subs into the present due to covid, however as a result the future “backlog” is looking rather poor.

Sure enough, in his letter to shareholders, Netflix CEO Reed Hastings said the pandemic led to a boom in the first half of the year and warns that it won’t continue. In the first two quarters of this year “we saw significant pull-forward of our underlying adoption leading to huge growth,” he wrote. “As a result, we expect less growth for the second half of 2020 compared to the prior year.”

The market was not happy with the dramatic drop in projected new subs, which would be the second lowest going back to 2016, and the stock has been hammered after hours, tumbling as much as 10%. 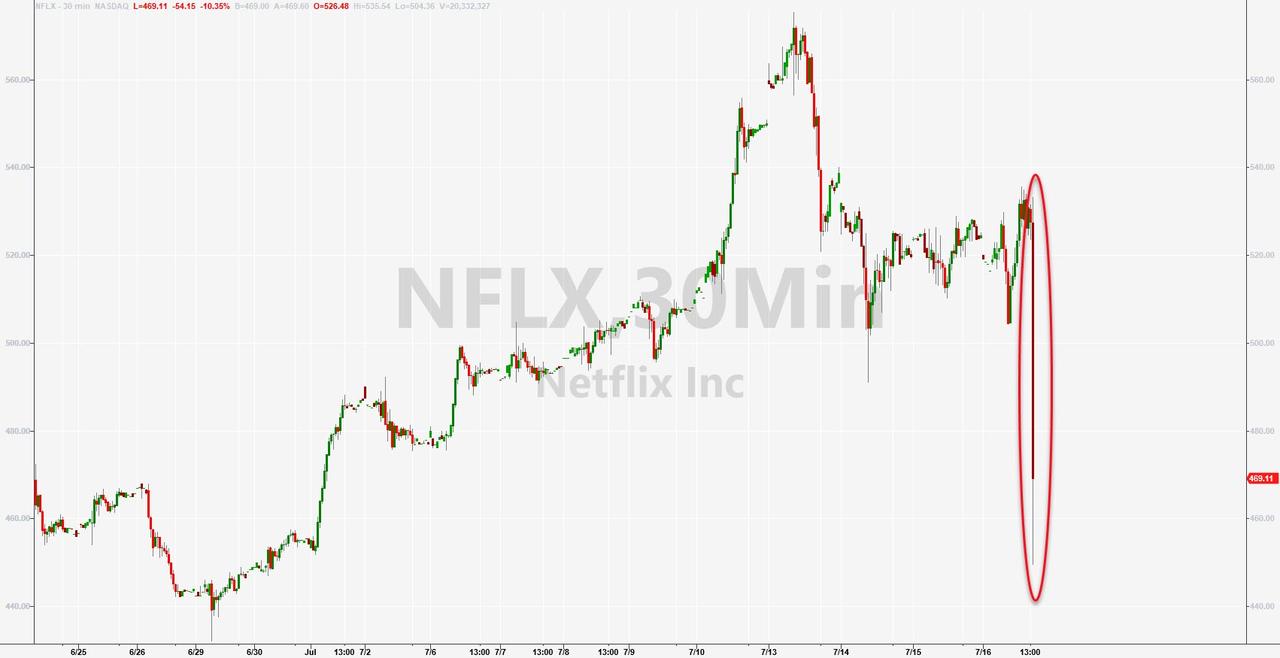 6 Tips on How to Read Old Economics Books