BofA Admits This Is A Massive Tech Bubble; Reveals How It Will End

BofA Admits This Is A Massive Tech Bubble; Reveals How It Will End

Last week, BofA’s Chief Investment Strategist reminded readers of his famous Flow Show report that the disconnect between macro and markets has never been greater – i.e., markets have never been more broken – but that is to be expected for the following three reasons:

Fast forward to Hartnett’s latest weekly report, in which the BofA CIO – having previously exposed that the Fed has irreparably broken capital markets – looks at the causal chains that defined the past three months, and writes that “markets are up big because there was no Lehman” thanks to $18.5 trillion in global stimulus (in particular $8.0tn of central bank asset buying) which has – so far – prevented widespread bankruptcy and defaults in 2020 recession despite significantly higher debt as % GDP than during 2008 GFC (as shown in the chart below, 78% to 113% in government sector, 88% to 94% in corporate sector). 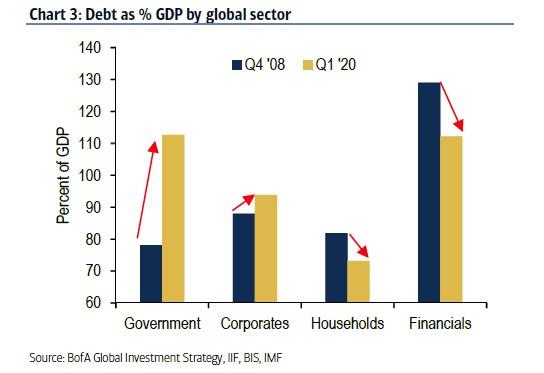 It gets better: as Hartnett says next, this “successful central bank repression of rates, spreads, volatility begets speculative froth elsewhere in the financial system” – here we will casually point out that only the biggest idiots and Fed apologists no longer admit that the Fed has blown the biggest asset bubble in history – and as a result “the unintended (or perhaps intended) consequence” is what Hartnett calls a 1999-lite -a world in which the IPO ETF of newly public companies is up 100% from March lows, SPACs, or special purpose acquisition companies, have accounted for 33% of US IPO filings YTD, and China’s STAR index is trading at 109x PE – i.e., a brand new tech bubble created (perhaps) intentionally by the Fed which will grow and drag everyone in until it finally bursts leaving millions of retail daytraders with nothing.

Of course, the question everyone wants answered is when will this mega bubble burst, and as Hartnett responds, “it is central banks, not bearish investors that end bubbles”, yet with the price of money is at all-time lows, as seen by the lowest US bond yields in history of the Republic… 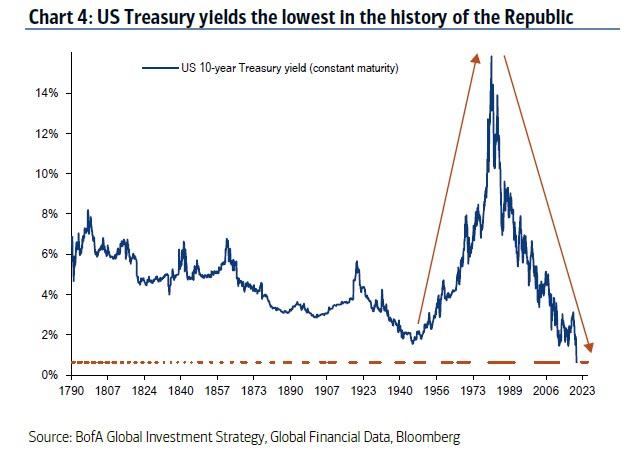 … the BofA strategist warns that the “the remarkable rally in credit and stocks may be closer to an end than a beginning”… with the caveat that central banks saying “sell” excesses in bonds & credit can foster further even more excesses in growth stocks et al, thus giving stocks one final boost before it all comes crashing down.

Hartnett concludes by pointing out a paradox: while the US has now devolved to Soviet style central planning where bond yields are not allowed to rise or else the entire financial system would collapse, it is communist China “intriguingly” that is  “the one place in the world where bond yields are rising (10-year yields up 42bps past 3 month vs flat in US Treasuries”

And since China was “first-in, first-out” in terms of virus and recession, and Chinese stocks (particularly tech) have led global equities higher, which can be seen by the impressive bounce in China’s credit impulse… 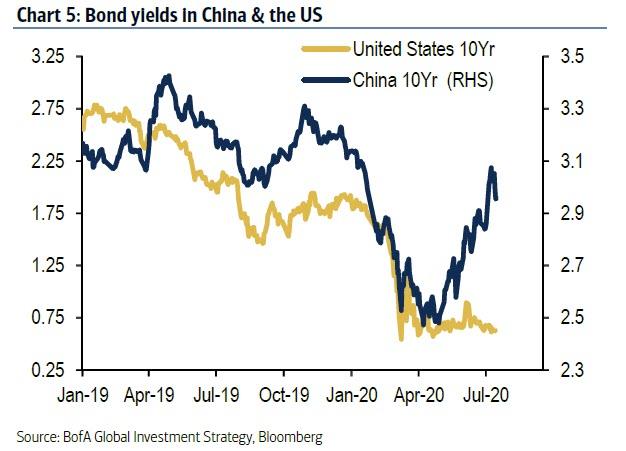 … Hartnett concludes that “if tighter monetary conditions are to “pop” tech, we think it would happen in China first (10-year >3.5%).“

In other words, for all those wondering when the most artificial “bull market” of all time will end and the biggest asset bubble in history finally bursts, the answer may be found not in the US but in China, a fact which gives Xi Jinping unlimited leverage over a US president who has become absolutely obsessed with the stock market, as if it is somehow a barometer of his performance.

Bill Gates admits that 700,000 people will be harmed or killed by his coronavirus vaccines

‘People Should Have the Fundamental Right To Change Their Consciousness’