For much of the day, the dominant theme was one of dollar weakness which saw the Bloomberg dollar index tumble below 1,200 and also take out the June 10 lows… 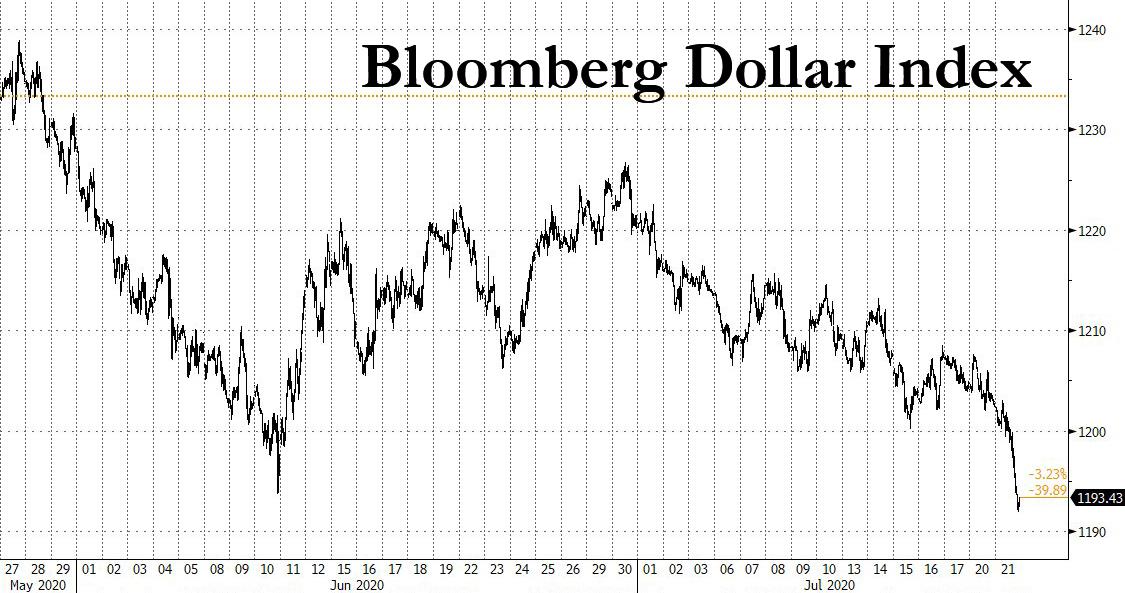 … the direct result of not just cable strength, as the sterling hit its 5-week highs, but mostly due to the ongoing surge in the EURUSD which continued its recent ascent, catalyzed by today’s successful conclusion of the EU summit where the stimulus package was finally approved after five days of discussions. 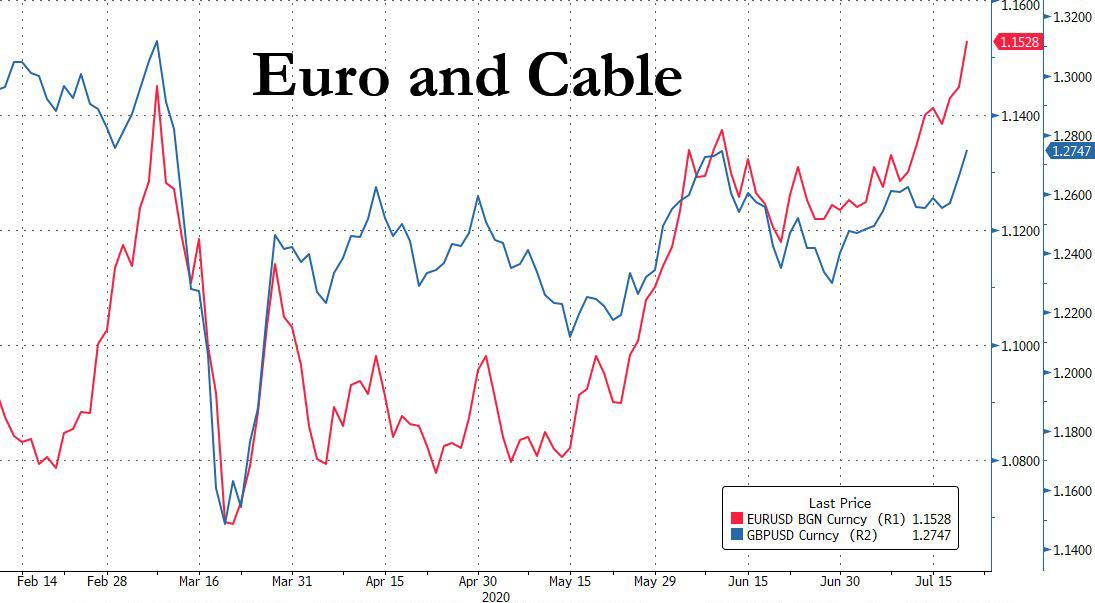 And as the dollar tumbled, gold has continued its impressive surge, rising to $1,840 and now less than $100 away from its all time highs hit in September 2011. Even more remarkable, perhaps is that silver has also finally caught a bid, surging by more than $1 today, to trade at $21.20, surpassing the highs set in 2016, and now trading at a level not seen since 2014. 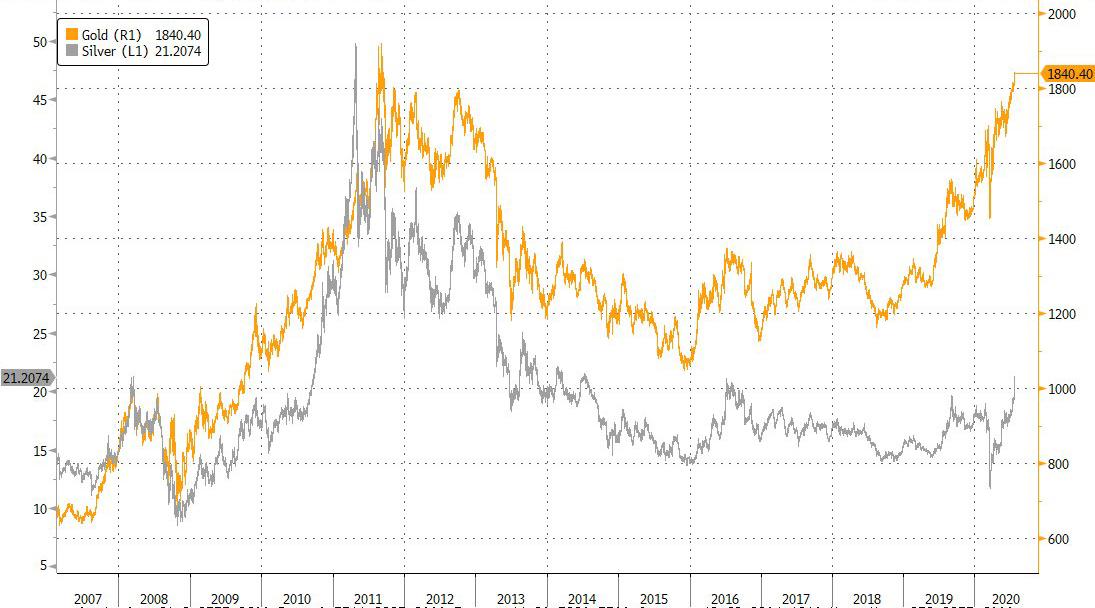 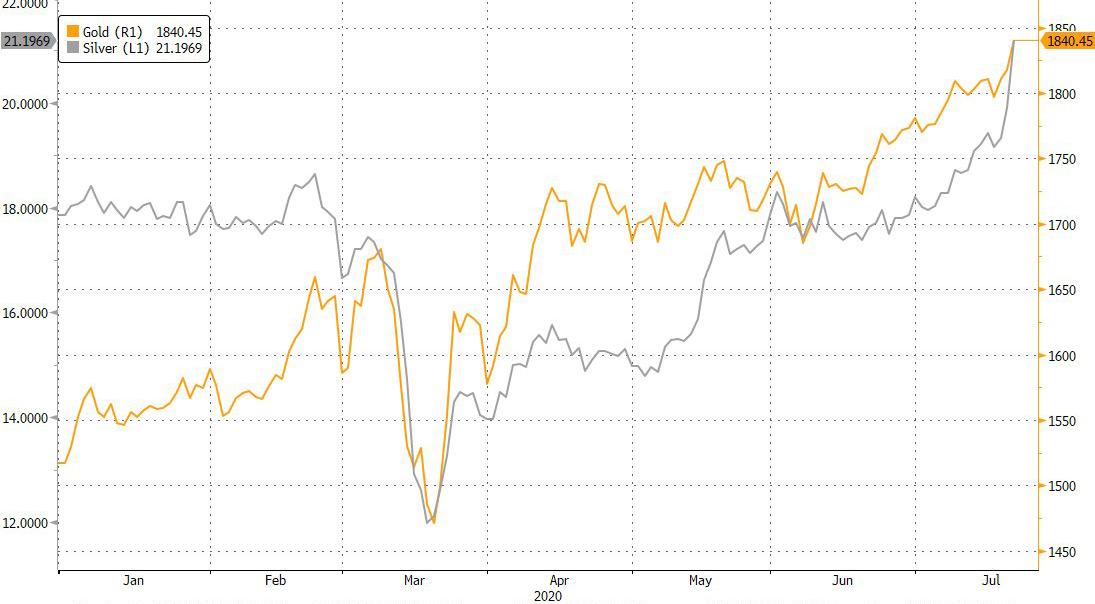 … and if one goes by the long-term gold/silver ratio chart, silver still has a ways to go before catching up to its average of 60x. All else equal, if one assumes a gold price of $1,840, silver has about $10 of upside to go just to catch up to its historical “fair value”. 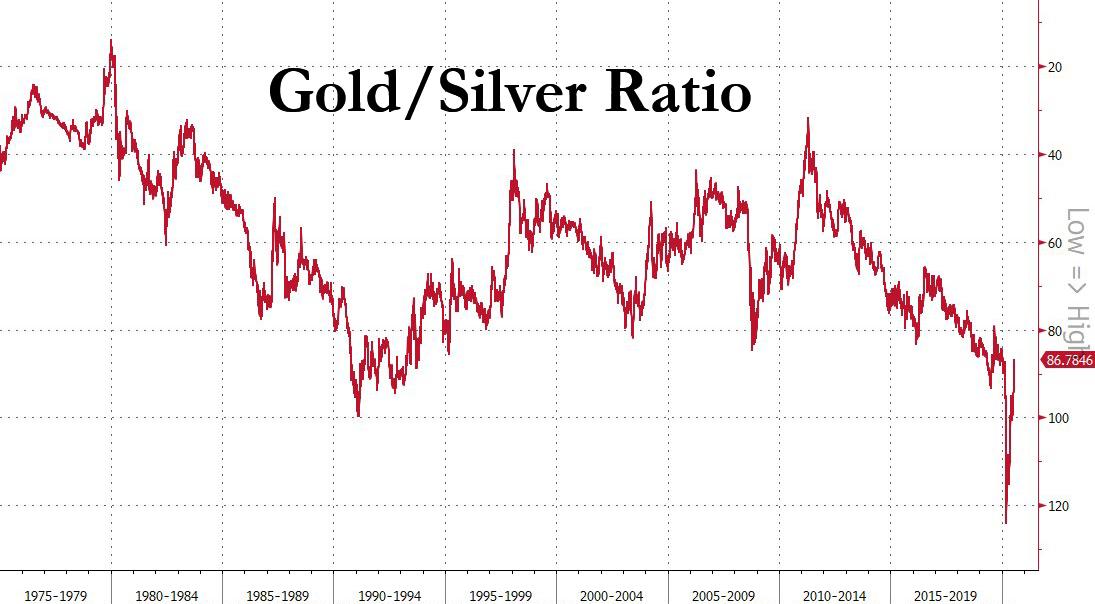 So what about stocks? Well Europe was happy, with the Stoxx 600 rising to a new 5 month high, if still having a ways to go until it is unchanged for the year, a feat which Germany’s DAX has almost achieved already. 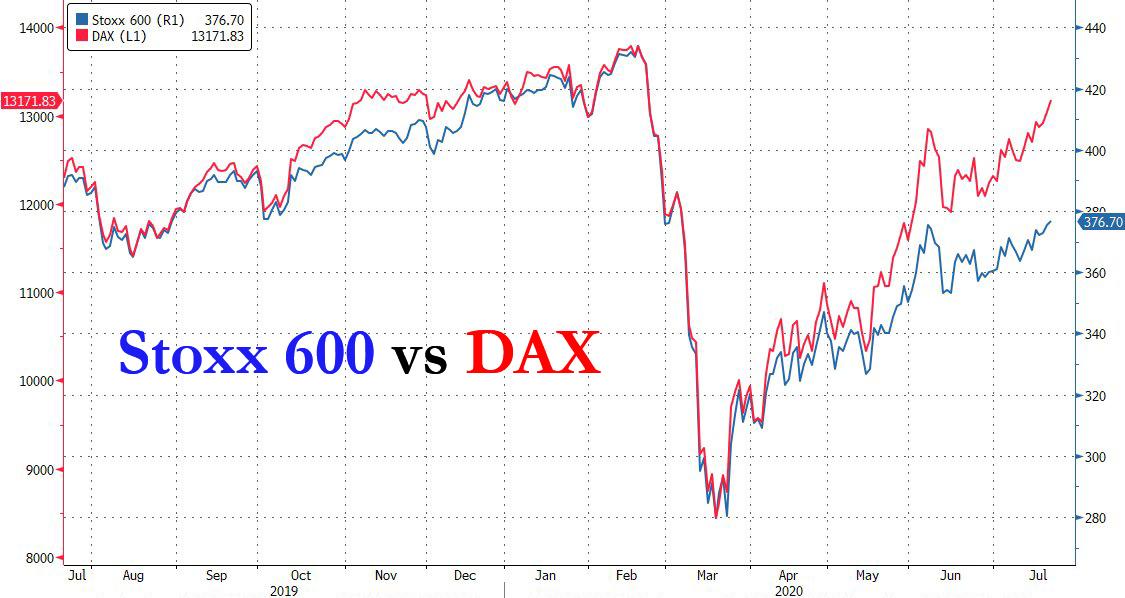 In the US, things were more dramatic, with the Dow Jones blasting off out of the gate, while the Nasdaq slumped erasing some of its massive Monday gains as traders took profit in the FAAMGs even as IBM jumped after sales topped forecasts. 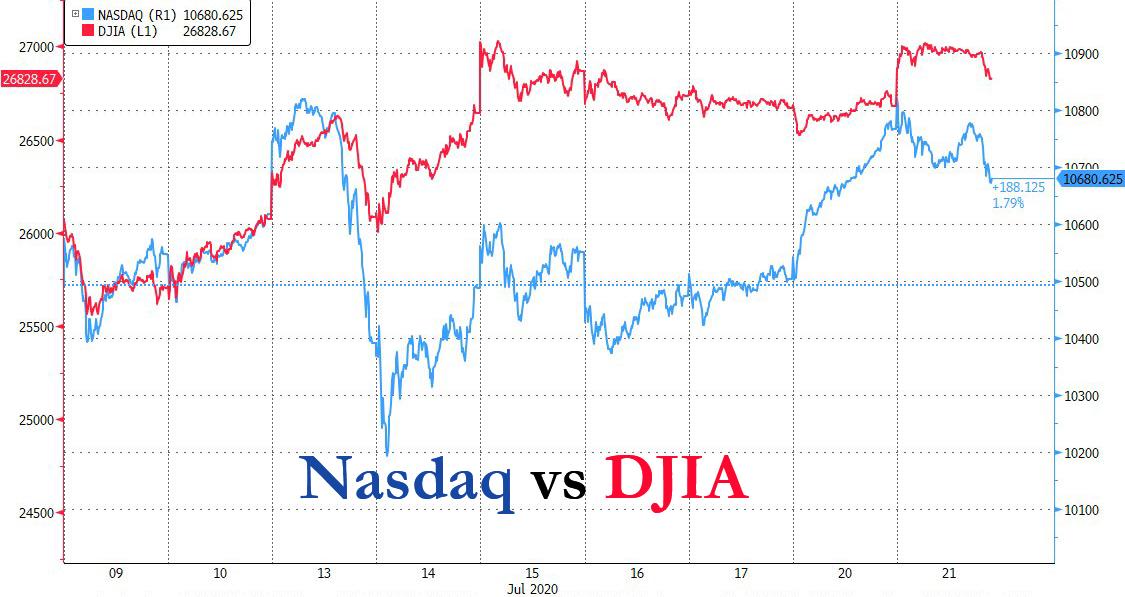 The Nasdaq 100 edged lower after closing at an all-time high on Monday, up 25% YTD, with investors awaiting a barrage of megacap tech earnings later this week. And while the S&P and the Dow were trading notably higher for much of the day, they gave up all most gains shortly after 3pm when Senate GOP leader Mitch McConnell was quoted as saying he does not expect the next stimulus bill to pass by next week, in effect ending the massive benefits that US consumer have gotten used to in the past three months, and hammering consumer shares. 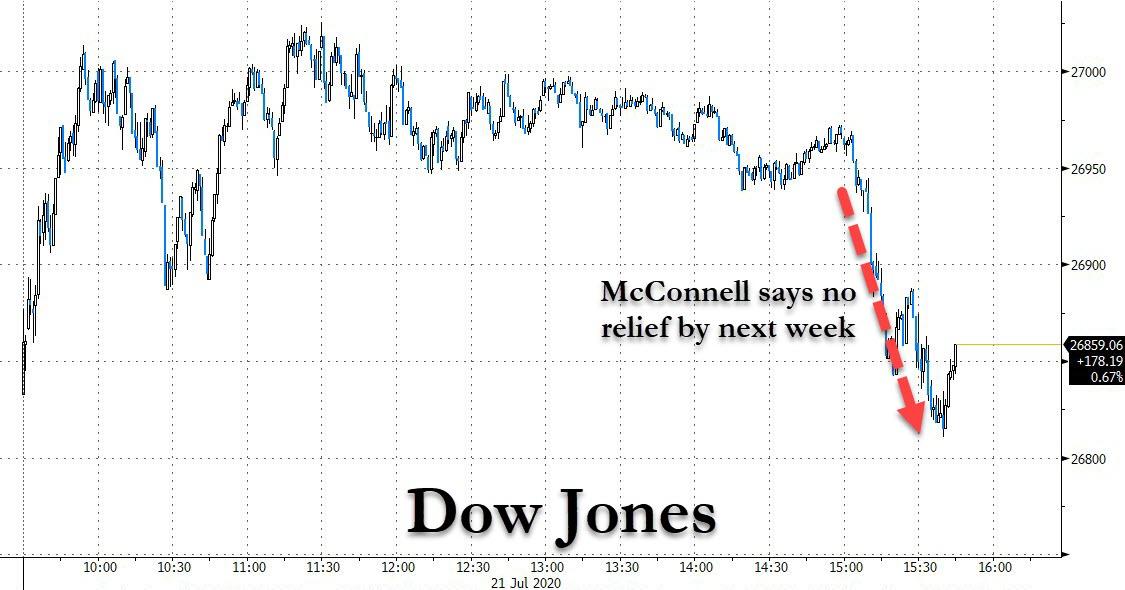 It only got worse toward the close, when a sizable $1.8BN Market on Close sell imbalance hammered stocks, and sent the S&P cash into the red, and less than 1% up on the year. 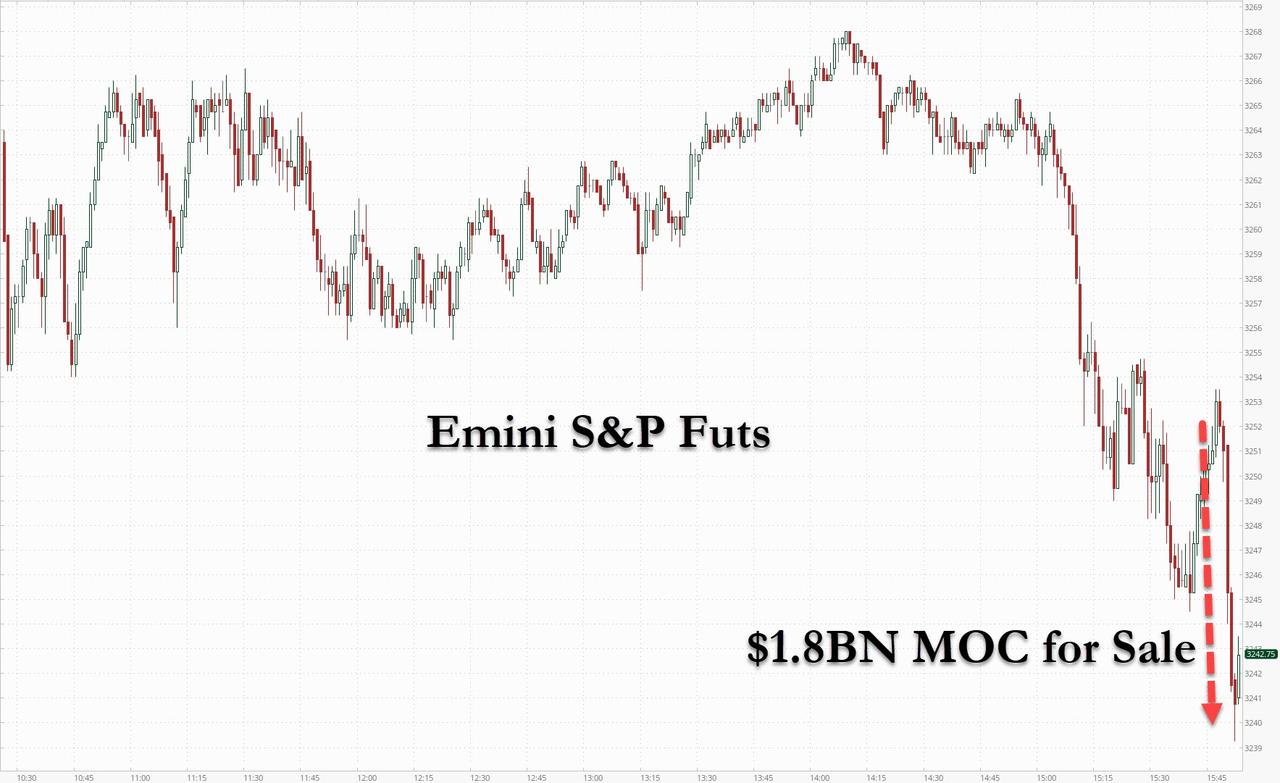 Oil’s surge lifted Exxon Mobil and Chevron in the Dow Jones Industrial Average. Brent jumped more than $1, rising just shy of $45, while WTI traded at $41.76, both hitting the highest levels since March on hopes reflation will bloom thanks to Europe’s €750BN stimulus fund. 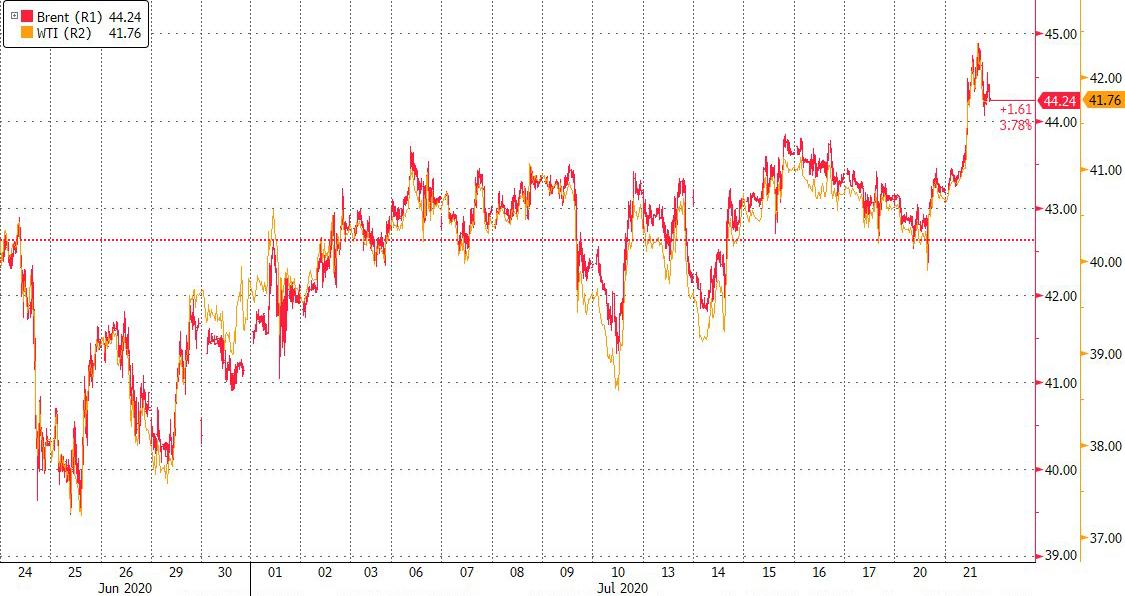 Meanwhile, with bonds no longer reflecting anything besides the Fed’s liquidity and YCC intentions, the 10Y went nowhere – and has gone nowhere in the past week – keeping the curve trading in a painfully narrow range. 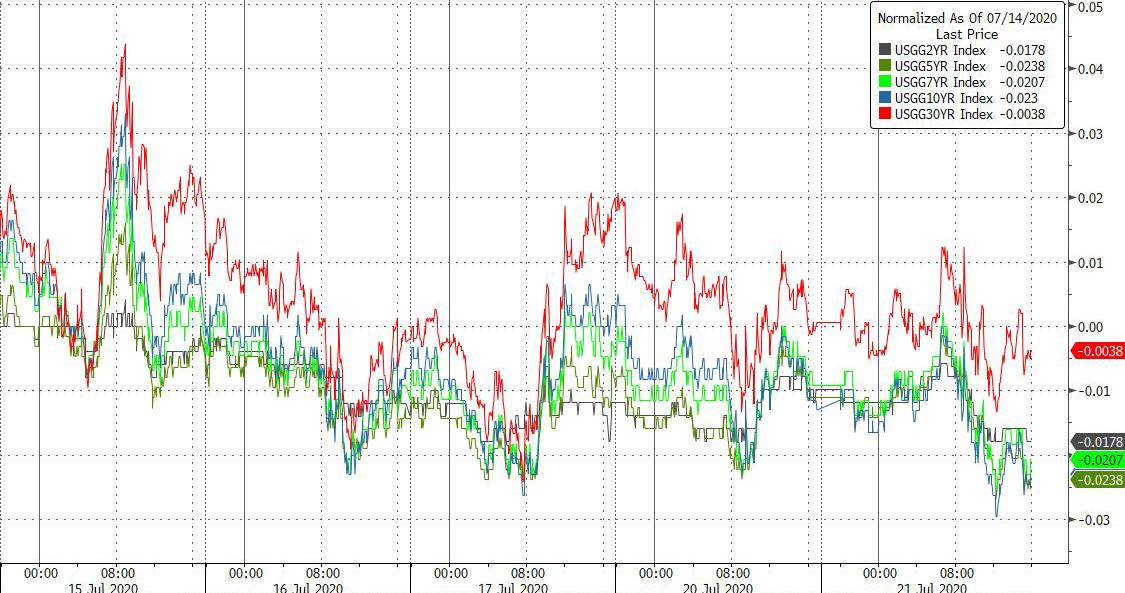 Finally, with the VIX sliding to its lowest level since March, the “fear index” ramped higher all day, and closed just shy of session highs in what may be an ominous reversal which kept the VIX just above 25. 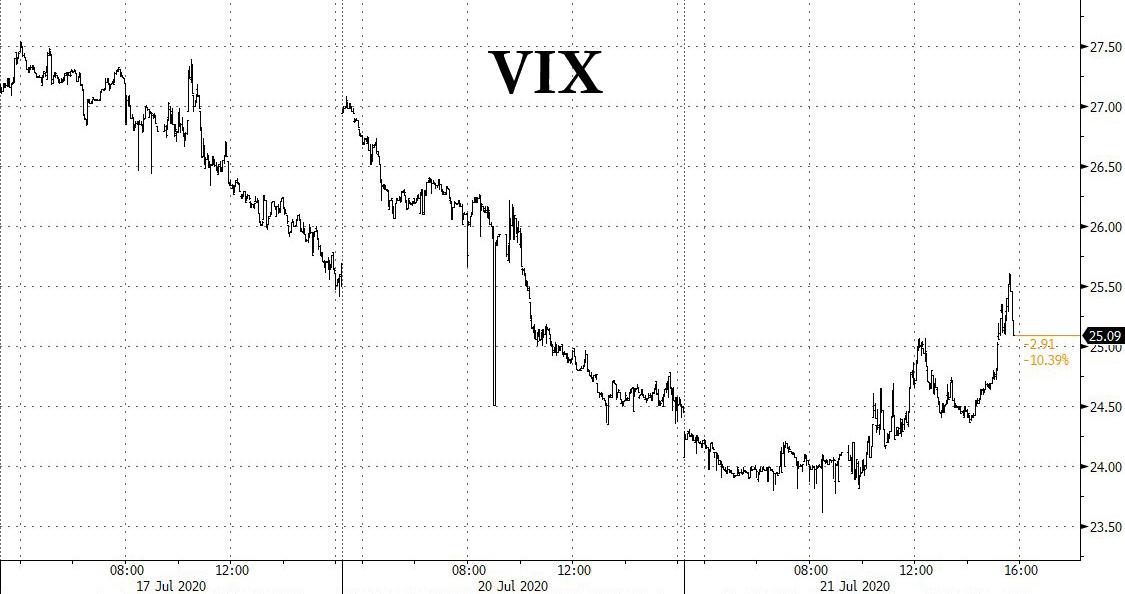