US main equity indexes traded lower Friday afternoon on new concerns the economic recovery is faltering, with some losses offset by considerable gains in technology companies.

Shares in Apple, Amazon, and Facebook soared higher after reporting positive earnings on Thursday evening. But there was a significant problem, the rest of the stock market puked Friday, dollar caught a bid, US10Y printed at 53bps, gold remained at highs, and investment-grade credit spreads started to widen, as it becomes increasingly clear the recovery is reversing.

Holt said the political risks are mounting in Washington, especially when President Trump tweeted about delaying the election.

Holt pointed out the labor market recovery is slowing with initial jobless claims increasing for a second week, along with continuing claims on the rise for the first time since May.

With a fiscal cliff hitting and a recovery reversing, stalled stimulus talks with Democrats and Republicans is bad news for the fate of consumption in 3Q.

Here’s an excerpt from his note:

What a coincidence. Shortly after seeing the GDP and claims numbers and thinking about a souring economy into the election, President Trump tweeted that the election should be delayed because of the risks that people would be taking if they had to vote during the pandemic. Going back to school and reopening everything is ok, but voting would be wayyyy too dicey… I guess they were a tougher breed that still voted in the 1918 midterms!

What he saw was indeed disturbing, but not particularly impactful to markets— until his tweet hit and brought equity futures a bit lower as it obviously foments concern he won’t give up the title easily even if defeated. That risks political dysfunction of a shape and magnitude never before seen in the US. Hence the drop in the USD immediately after his tweet in that political dysfunction, stalled fiscal stimulus and a souring labour market lend serious consideration to a much greater degree of caution toward US assets. Each of these risks feed off of one another in that the tweet doesn’t help the tone of the fiscal dialogue with stimulus extensions of vital important to the job market.

Weekly initial jobless claims increased by 12k from an upwardly revised prior week estimate for a combined increased of 18k (chart 1). 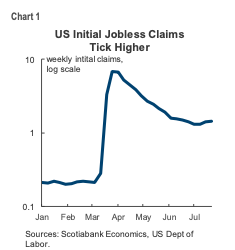 Continuing claims registered the first jump in the extended duration of jobless benefits since the first week of May (chart 2). More initial claims and staying on earlier claims for longer is a double negative. 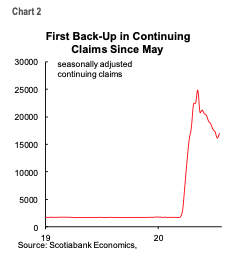 While two weeks of higher initial claims, an up-tick in the lagging duration of unemployment and expired $600/week benefits are less than ideal, the silver lining could be the possibility that a souring job market focuses the minds in Washington!

The GDP hit was in line with expectations and backward looking to forward looking markets. The dual rise in initial and continuing claims adds to concern that the US job market is slowing even if we don’t see that in next Friday’s nonfarm payrolls versus risk into August payrolls.

The GDP drop is shown in chart 3. Chart 4 shows the weighted contributions to growth by GDP component. The dominant role played by services consumption a) in an economy dominated by the service sector, and b) given the concentrated social distancing effect on services after the lockdown should surprise no one.

With political risk surging and a recovery reversing, high-flying technology stocks, the most overcrowded trade ever, haven’t been enough to breakout Nasdaq futures to new highs. Stall warning…

Could political dysfunction and a reversing recovery be enough to reverse stocks?

Commodities And The Future Of China’s Stall