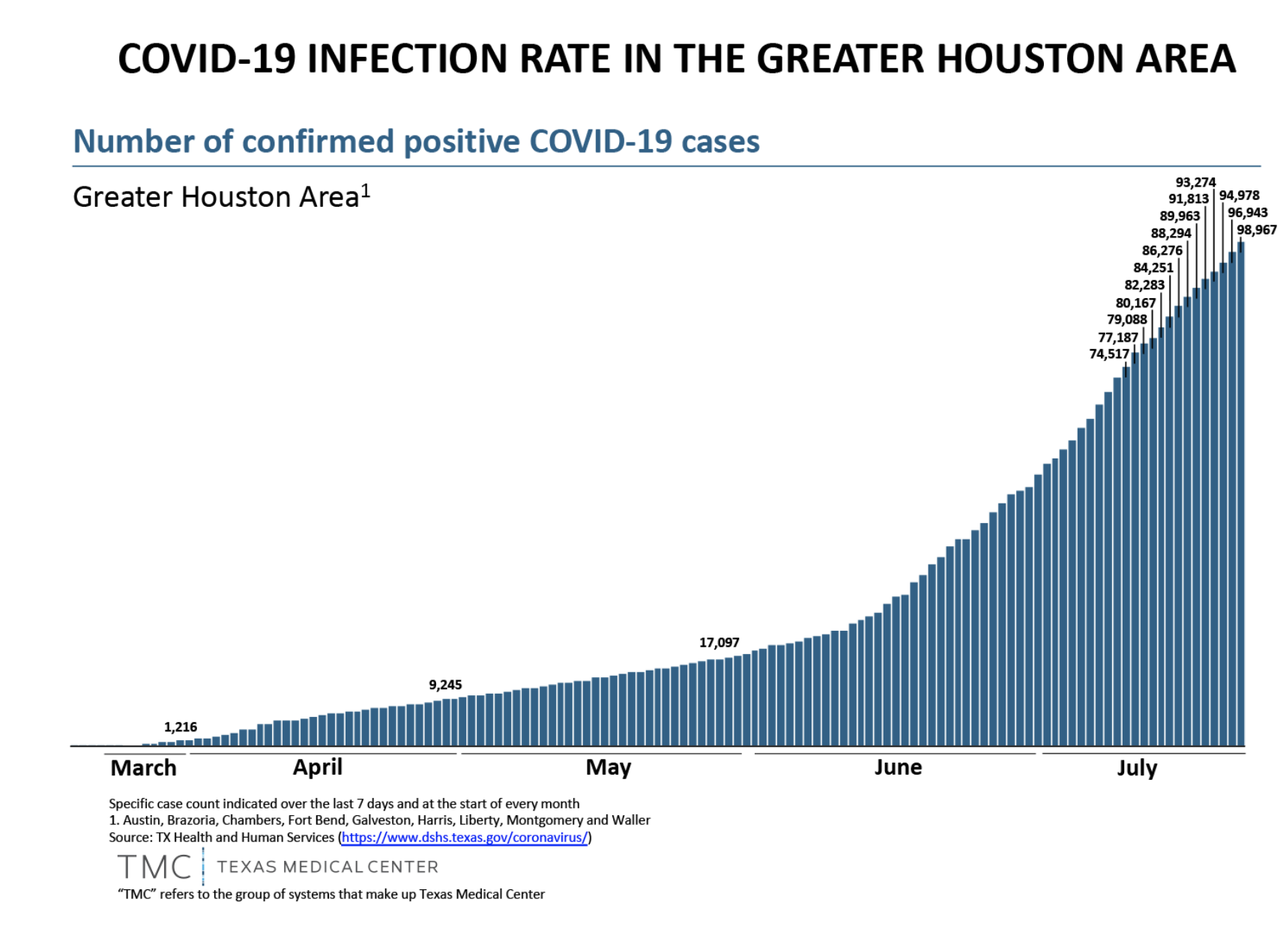 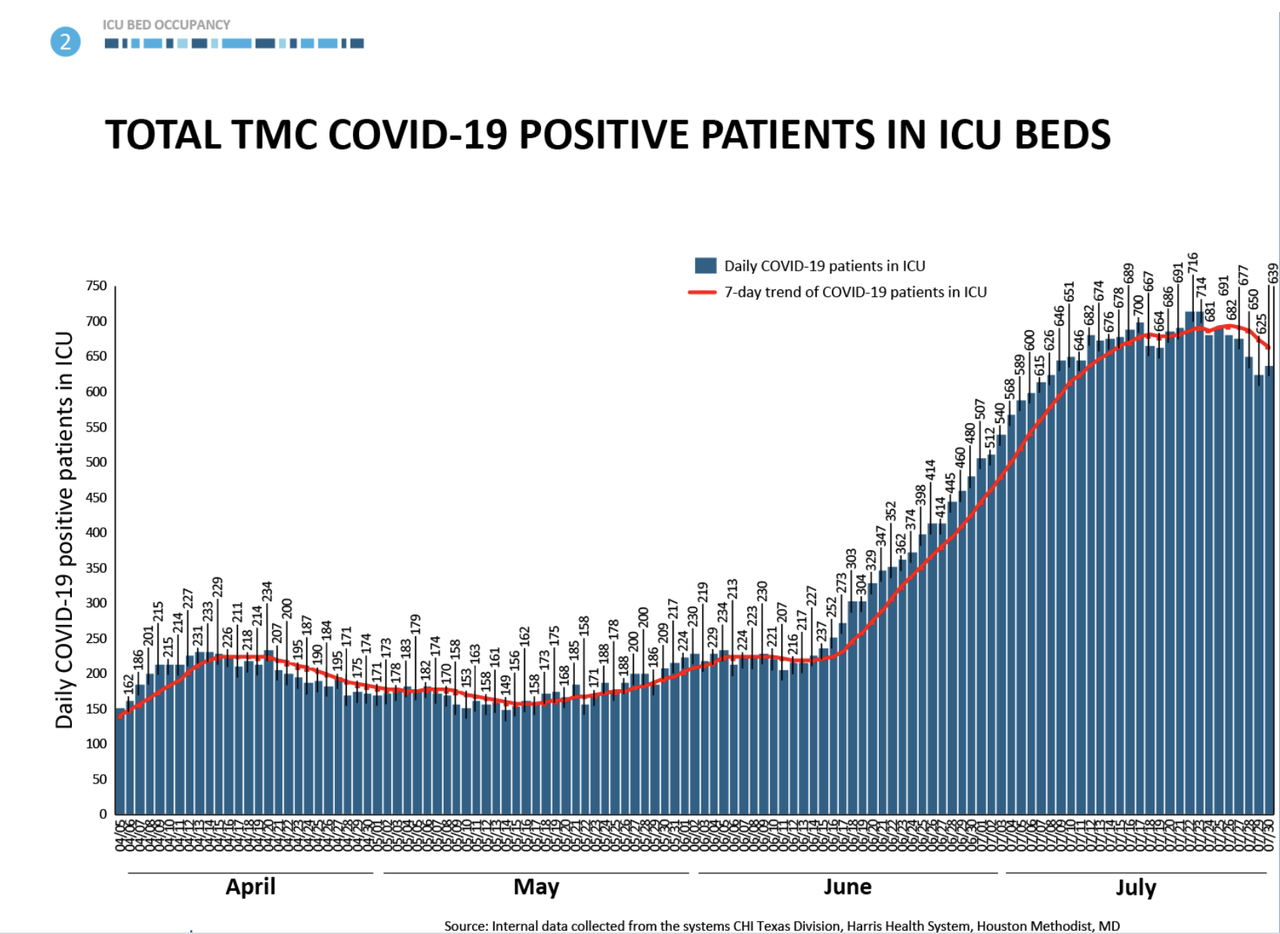 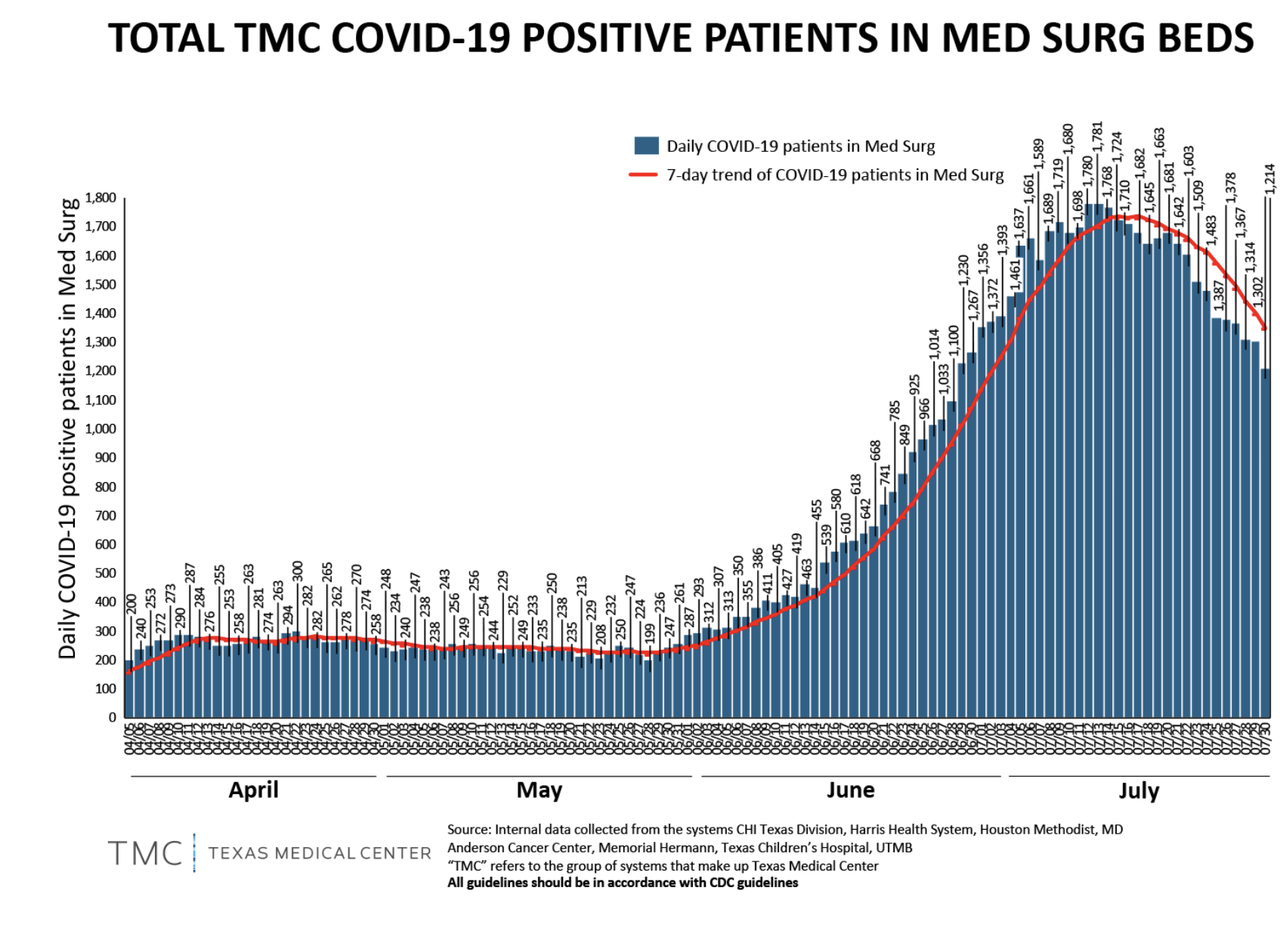 Update (1320ET): Earlier, Nancy Pelosi warned following another meeting on the next COVID-19 stimulus package that the outbreak in the US is a “freight train picking up speed”.

That’s not actually true. While the rate of testing has slowed over the past week in the worst-hit states, overall numbers and percent-positive figures have been trending lower across the Sun Belt for 2 solid weeks. Earlier, Dr. Fauci once again told a House panel earlier today that he’s “optimistic” we’ll have a vaccine by the end of the year.

In reality, as a team of Goldman analysts pointed out in a note published earlier today, the spread of the coronavirus is moderating nationwide, as some of the worst-affected states are now seeing declines in the number of new cases per day. But the level of new cases nationwide remains very high.

And some states like New Jersey have seen new cases climb in recent days, pushing the state’s “R” rate, which measures rate of spread, to new highs. New Jersey’s R rate just climbed to 1.35, its highest level since the worst days of the state’s outbreak.

Even with the increases we’ve seen in the latest case numbers, NJ remains among the ten states nationwide with the lowest number of active cases per capita. pic.twitter.com/KbDHGqBGxp

☑️Spot positivity rate for tests from July 27th is 2.15%
☑️Rate of transmission has increased to 1.35

These numbers are setting off alarms. The only way to silence these alarms is by taking this seriously.

I am not announcing any specific action today, but consider this as being put on-notice.

We will not tolerate these devil-may-care, nonchalant attitudes any more.

YESTERDAY:
☑️695 patients in our hospitals – 352 COVID-confirmed patients and 343 Persons Under Investigation pending the return of their test results
☑️113 patients in either critical or intensive care
☑️45 ventilators in use pic.twitter.com/Z5XxUAgbKU

Overall, the trends in our hospitals continue to move our health care system in the right direction.

As these numbers keep moving down, so do we in the national rankings of the important health care metrics. pic.twitter.com/vBd3EOhhaJ

Sadly, we must report an additional confirmed 10 #COVID19 deaths, bringing our confirmed COVID-19 death total to 13,944.

Of these, seven occurred within the last five days.

We all want to get back to things the way they were, but right now that’s just not possible.

As a result, Goldman said, states are leaving reopening plans on hold or tightening restrictions further. Over the past few days Kentucky, Mississippi, Oregon, and Rhode Island have increased restrictions… 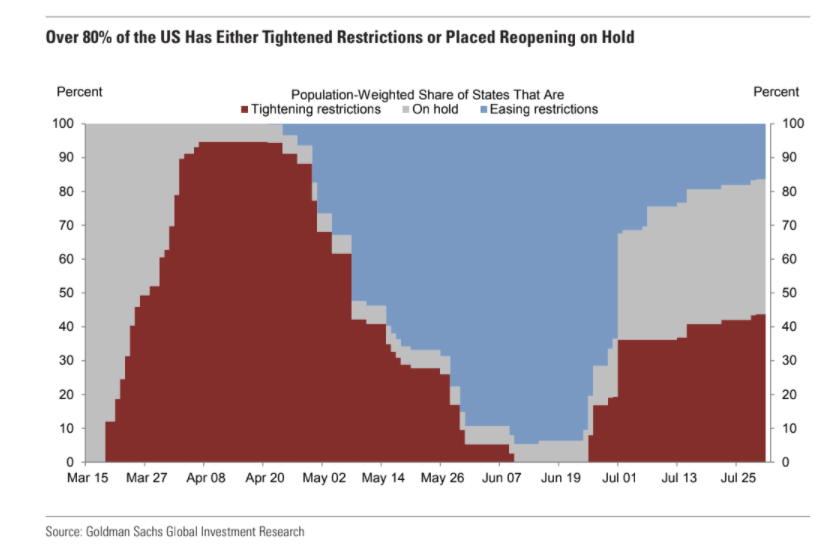 …and here’s the full state rundown. 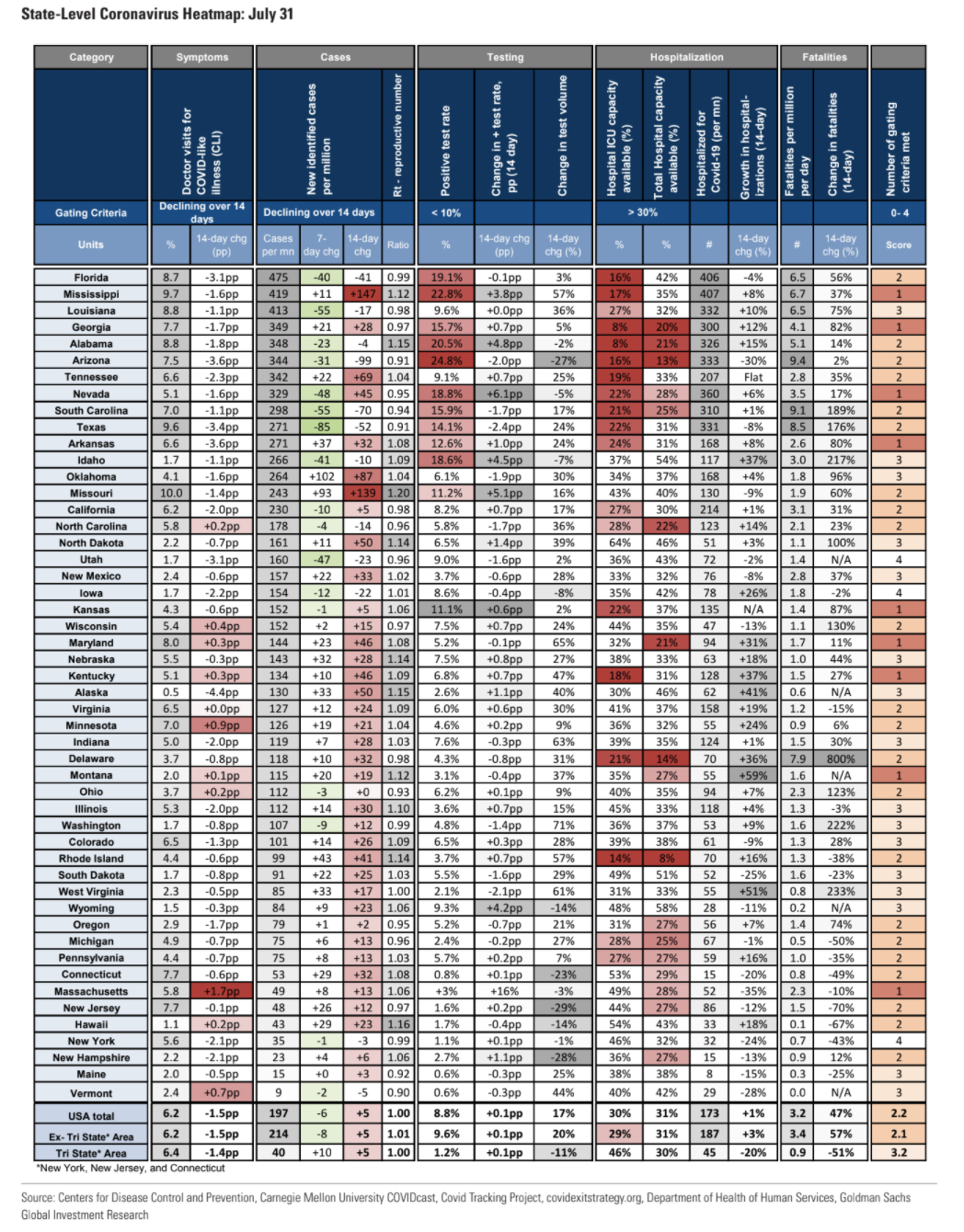 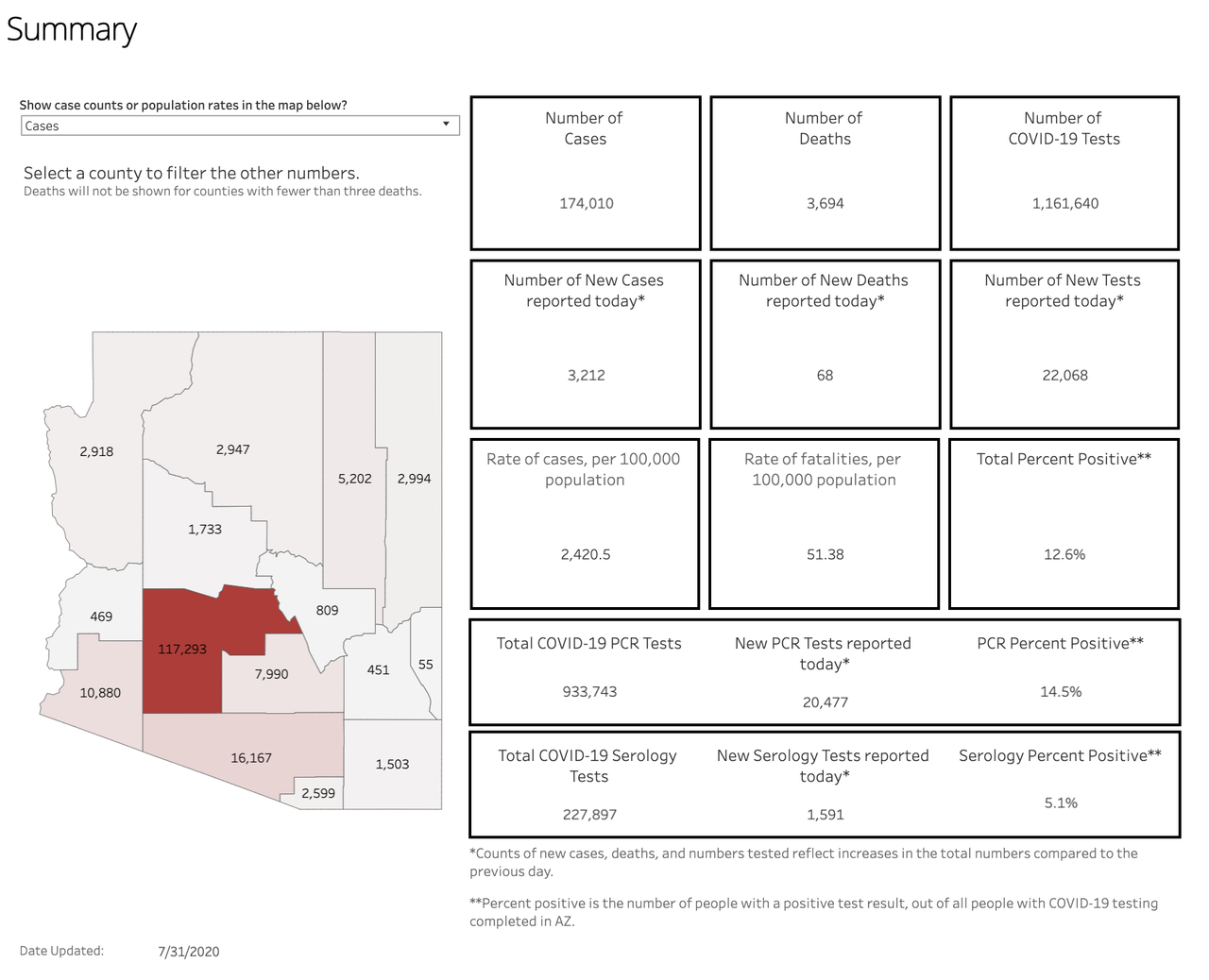 ICU occupancy in the state was 86%. 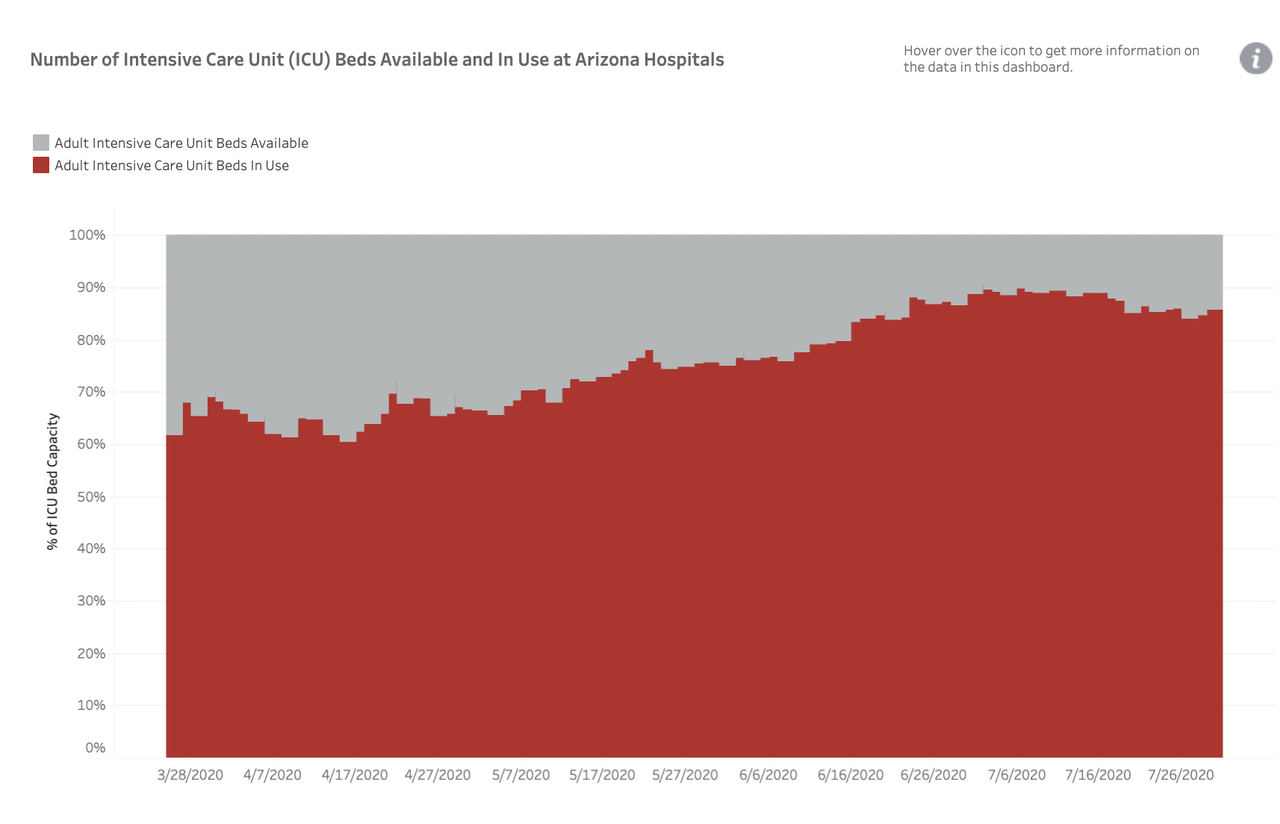 NYC schools can reopen when its COVID-19 infection rate has been below 3% for a while, according to NYC Mayor Bill de Blasio.

Fortunately, NYC has been below that threshold for weeks, de Blasio said.

When schools reopen, face masks will be required along with social distancing, free Covid-19 testing will be offered, and all staff and students must have the necessary personal protective equipment to work in the classroom, de Blasio said.

After reporting its first cases in months, Vietnam just reported its first COVID-19-linked death yet on Friday. The southeast Asian nation reported 37 new coronavirus cases on Friday evening, raising Vietnam’s total number of infections to 546, while its death toll is now a lonely 1.

Update (1045ET): Florida reported 9,007 new confirmed cases and 257 new deaths on Friday, smashing the previous record for single-day deaths for the fourth day in a row.

Meanwhile, some more bad news for the MLB has just hit the tape: Friday’s game between St. Louis and Milwaukee has reportedly been postponed after multiple Cardinals tested positive for COVID-19, according to the AP. This follows nearly 20 Miami Marlins players testing positive over the past week, and a pair of Phillies employees.

The news revived speculation about the league cancelling the season, something Commissioner Robert Manfred has insisted won’t happen, but users on twitter insist is a foregone conclusion.

season will be shut down by September

Ok can we stop this insanity now please… take the year off… protect your players, staff, and their families.

The Phillies, meanwhile, reported no new positive tests on Friday.

Circling back to FLA, the new deaths announced Friday include 96 in Miami-Dade County, 33 in Broward County, nine in Palm Beach County, and two in Monroe County.

Florida is also suspected of seeing a surge in cases as a tropical storm bears down on the state.

US markets are buzzed off last night’s quartet of big-tech earnings reports that absolutely demolished Wall Street projections (is that really such a surprise?), but signs that the virus is reemerging in Europe and Asia have continued to hector investors, politicians, business-owners and taxpayers alike.

Last night, we reported that UK PM Boris Johnson had ordered a large swath of northern England to return to ‘partial’ lockdown status.

These new ‘partial’ lockdown rules affect 4 million people across the region. If the UK seems a little trigger happy, it’s not without reason: Catalonia is seeing a serious resurgence of COVID-19, prompting local officials to issue new lockdown orders, while several European states issue travel restrictions or advisories targeting Spain, which has prompted the country to grouse about the damage to its tourism industry. 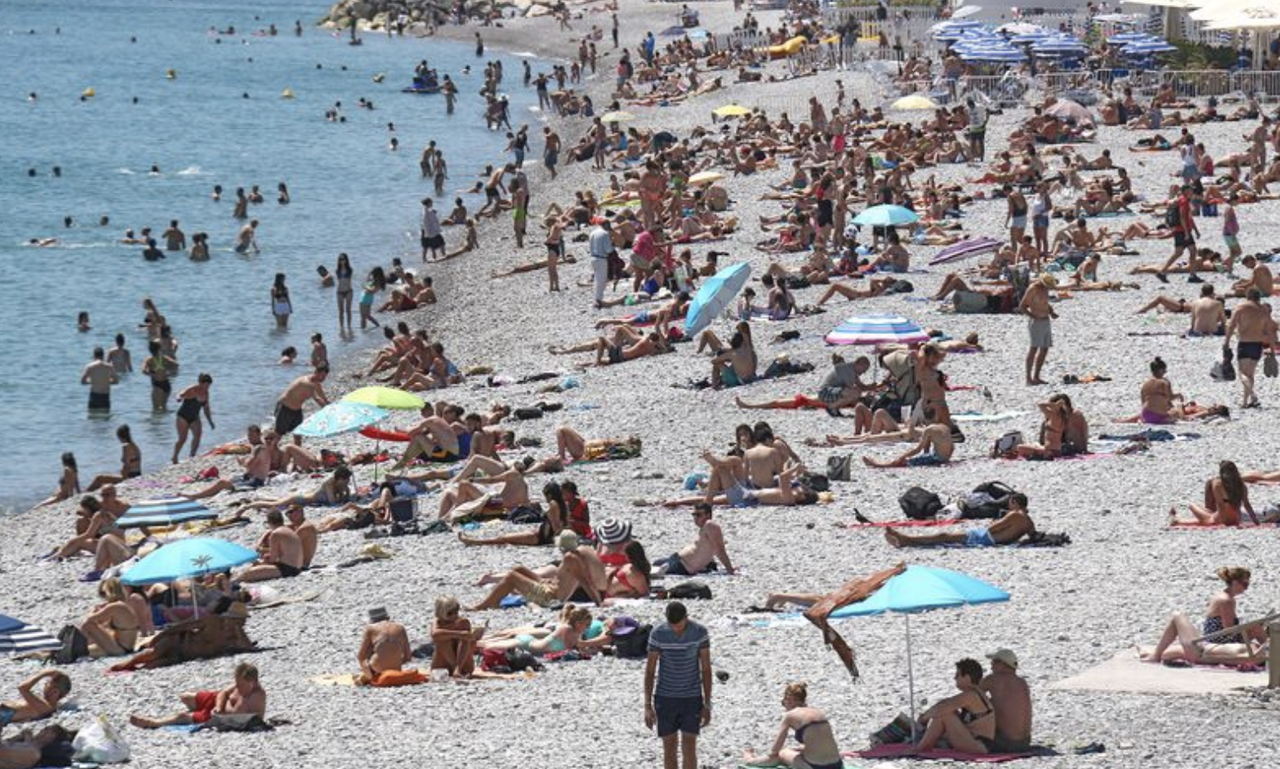 Bloomberg reported Friday that NYC is doomed for a resurgence of the virus in the fall, even as its infection rates continue to fall.

Why is Bloomberg so worried? Well, Melbourne, which has seen infections continue to climb despite strict lockdown measures and other social distancing procedures, is at the epicenter of a resurgence in Australia, which reported

The city has been a success story in combating Covid-19 since March and April, when the pandemic swept through its boroughs killing thousands of people. Yet the strategies that helped suppress the first surge — dropping the infection rate to just 1% statewide — will be tested as cooler weather pushes people together indoors.

Melbourne, Australia, with 5 million people, offers a case in point. With the Fahrenheit dropping into the 50s, Melbourne has seen an upswing in cases, a foreboding indicator of how tough it may be for cities like New York to control infections as the mercury drops. With fall and winter approaching, it’s “inevitable” Covid-19 cases will tick up, said Ashish Jha, director of Harvard University’s Global Health Institute.

“I am worried about complacency,” Jha said in an interview. “New York went through such a difficult few months, and I am worried that people are tired. A lot of people are looking at New York over the next six months and saying: ‘Could we possibly see a spike?'”

Australia’s second-most populous state reported 627 new cases in the past 24 hours, a day after suffering a record 723 new cases. There were also 8 more deaths. The situation in Victoria has prompted experts to start to question the benefits of mass lockdowns, as such restrictive measures have had little impact on Melbourne’s outbreak.

Hong Kong – which cancelled fall elections – and mainland China are also seeing cases rise: The mainland reported 123 local coronavirus infections for July 30, including 112 in Xinjiang and 11 in Liaoning, according to China’s NHC. 4 cases were also imported. Friday’s total number reported was higher than the 105 new cases reported in the mainland on Thursday. 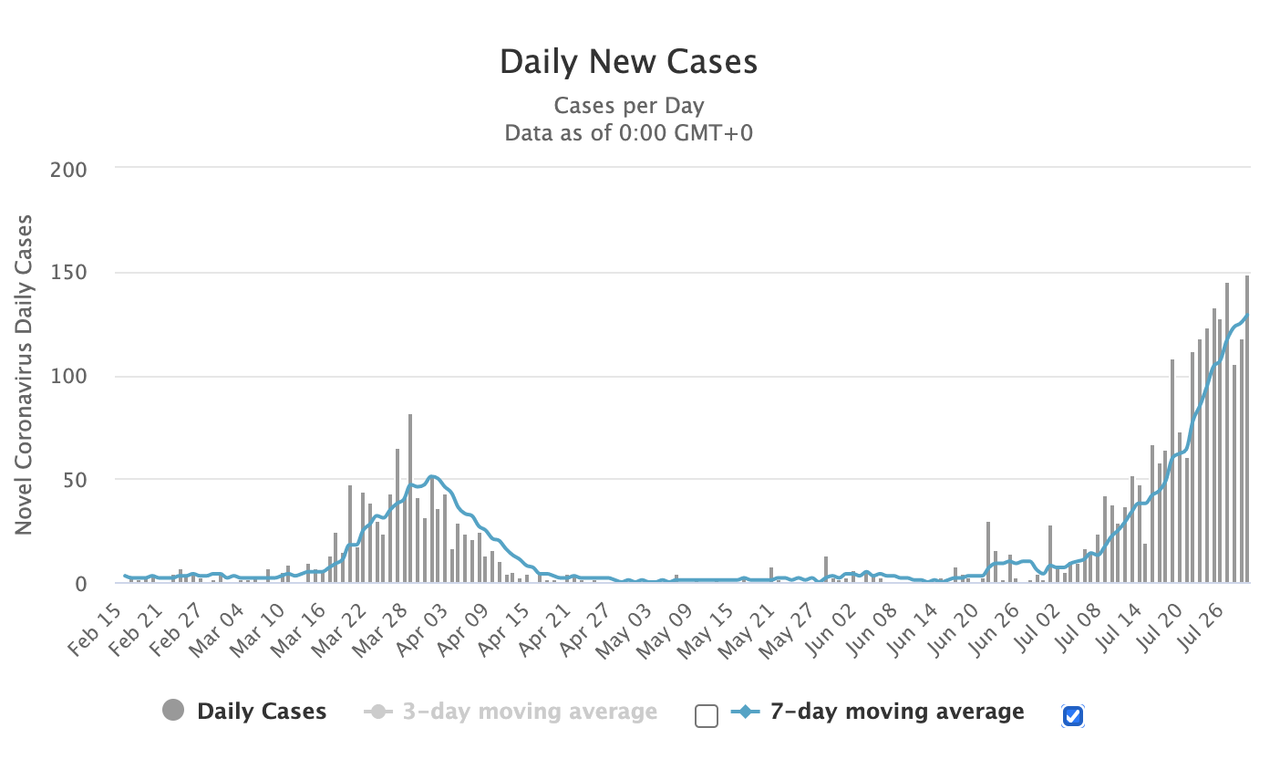 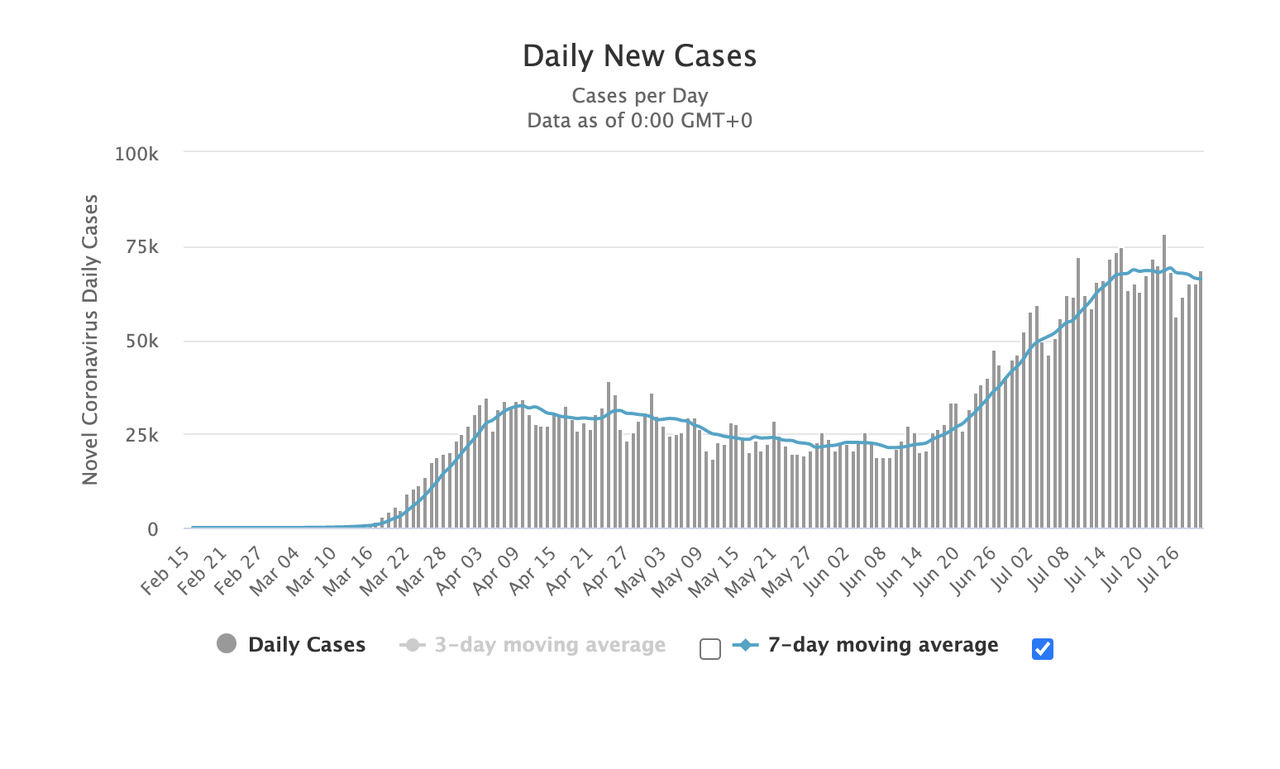 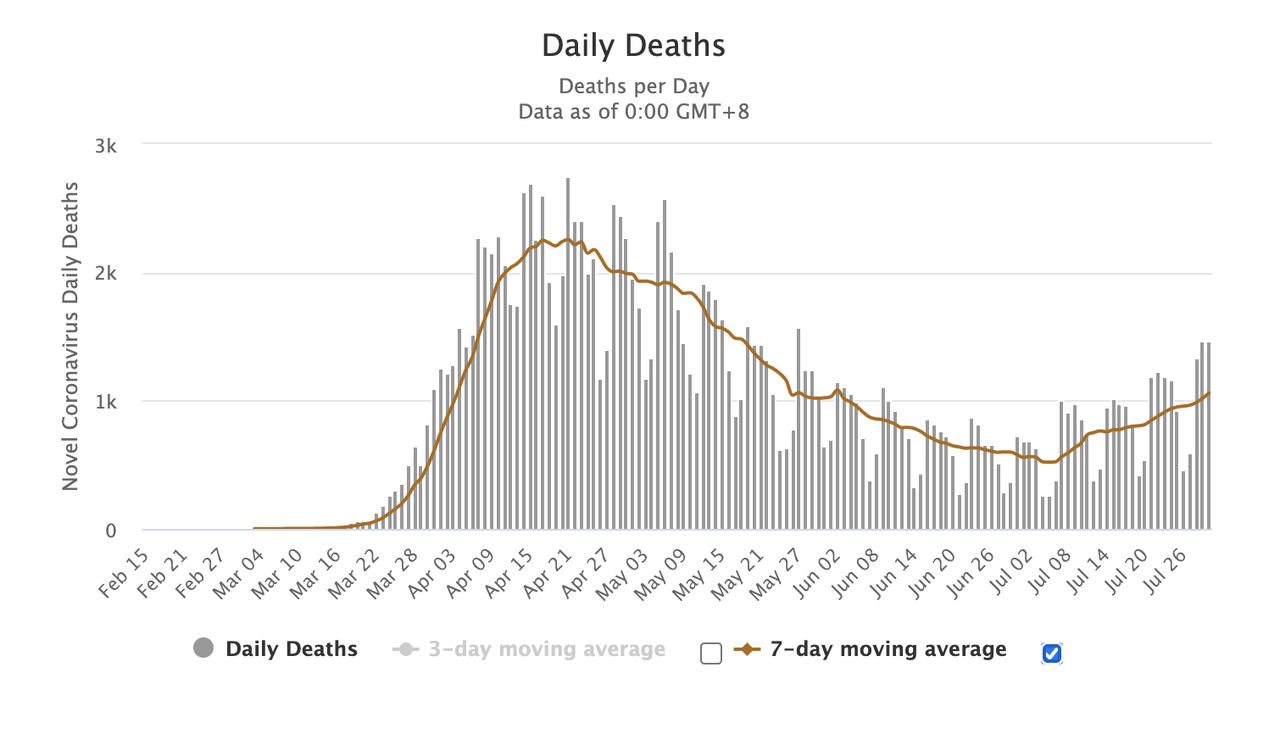 COVID-19’s global rebound shows us just how difficult it can be to stop such an infectious virus without sufficient levels of immunity within the population. Former FDA Director Scott Gottlieb once warned that the outbreak should be finished by January no matter what – either it will have run its course, or a vaccine will be made widely available.

Governments around the world have scrambled to strike deals with the companies leading the race for a vaccine, including Moderna, Pfizer, Astrazeneca, GSK and Sanofi, etc. Highly publicized deals have mostly focused on the most advanced vaccine trials: Which is why, after inking a record $2 billion deal with Pfizer, the US government on Friday reportedly signed a similar deal with Sanofi and GSK, mirroring a deal between the UK and the UK-based drug makers announced earlier this week.

The money comes via “Operation Warp Speed”, the Trump Administration program to simply throw money at vaccine candidates. the US will pay $2.1 billion to secure 100 million doses while supporting manufacturing and the expensive clinical trials. Here’s more on that from BBG:

The Trump administration will provide as much as $2.1 billion to Covid-19 vaccine partners Sanofi and GlaxoSmithKline Plc, the biggest U.S. investment yet in fast-tracking shots and snapping up supplies.

Part of Operation Warp Speed, the funding will support clinical trials and manufacturing while allowing the U.S. to secure 100 million doses of the shot, if it’s successful, the companies said Friday. The country has an option to receive an additional 500 million doses longer term.

The deal follows billions of dollars of U.S. commitments to other experimental vaccines – all still needing to show their effectiveness in testing – and may stoke concerns that other countries will be left behind. Vaccines are seen as the key to leading the world out of the pandemic that has killed about 675,000 people in a matter of months.

Like with the Pfizer deal, the US has an option to receive an additional 500 million doses longer term if the vaccine works out.

Our Inevitable Collapse: We Can’t Save A Fragile Economy With Bailouts That Increase Fragility