Key Events In The Coming Week: Payrolls, PMIs And (Lack Of) Profits

Key Events In The Coming Week: Payrolls, PMIs And (Lack Of) Profits

Looking ahead to this week now, the release of PMIs from around the world (today and Wednesday mostly) will set the tone, before the July US jobs report on Friday rounds out the week. On the central bank front, we will hear the monetary policy decision from the Bank of England and Governor Bailey’s ensuing press conference on Thursday. The market also enters the second half of Q2 earnings season, which has already seen a record number of beats in the S&P 500.

Looking at the current week, the data highlights will be Friday’s payrolls and various high-frequency economic in the form of survey, with the majority of manufacturing PMIs out on today, before services and composite PMIs come out on Wednesday for the most part. There’ll also be the ISM manufacturing index from the US (today) and non-manufacturing ISM on Wednesday. The key here, according to DB’s Jim Reid, will be to see how differentiated PMIs are given that some governments around the world are cautiously easing restrictions with others needing to tighten. For the countries where we already have a flash PMI reading, they generally showed that the recovery has more momentum in Europe than in the US. Many of the flash European levels were the strongest in at least two years, while both manufacturing and services PMIs in the US failed to meet expectations. 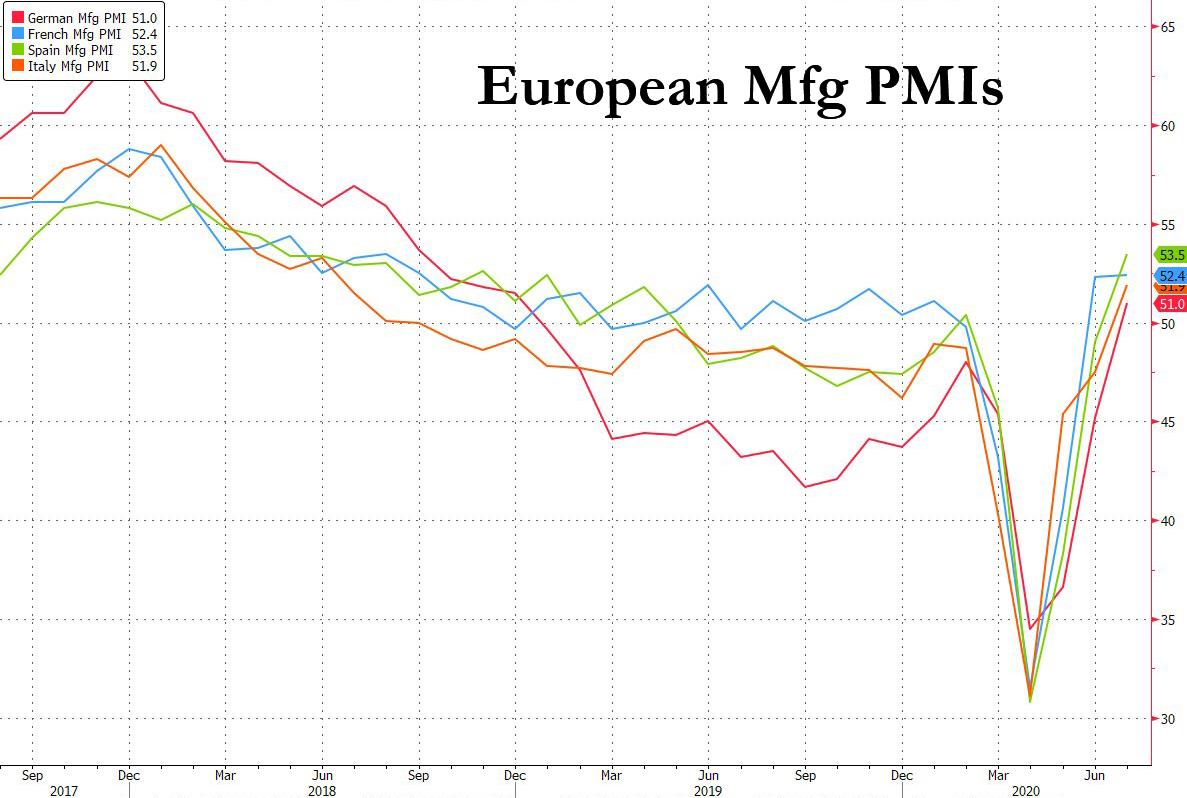 As ever caution is required as these are diffusion indices which simply monitor whether activity is better or worse than the previous month. And as the DB strategist notes, remember that the US was never as shutdown as Europe so momentum was always likely to be more in the latter’s favor regardless of the recent rise in cases.

In terms of payrolls on Friday, markets are generally expecting a third straight month of gains, though likely at a slower rate than we saw in June. DB economists are looking for a further +900k gain in the headline, below consensus estimates at +1.578m. This follows last month’s blowout +4.8m increase. The economists also see the unemployment rate falling to 10.5% from 11.1%, in line with the median estimate. This data will give some insight into how the renewed spread of the coronavirus through the US, especially in the South and West have affected the US economy. The rest of the key data can be found in the day by day week ahead guide at the end.

On the central bank front, one highlight will be the Bank of England meeting and Governor Bailey’s ensuing press conference on Thursday. While most economists do not expect any change to the policy rate this meeting, there is a chance for a dovish surprise on the overall commentary and tone. Focus will be on the central bank’s economic projections, the ongoing review of the effective lower bound, and the path of QE.

Elsewhere in central banks, India and Brazil are also releasing their policy decisions on Wednesday and Thursday, respectively. The two countries have the highest confirmed coronavirus caseloads outside the US, and are expected to lower interest rates in light of the continued economic impact of the pandemic. Following the FOMC last week and the lifting of the blackout period, we will hear from the Fed’s Bullard, Evans, Mester and Kaplan.

Here is a day-by-day calendar of events

US Offers Venezuela’s Maduro Amnesty If He Steps Down

Could This Be America’s Most Expensive Combat Drone Ever?