The nationwide fervor that gripped college students, and a coalition of other “marginalized” groups, comprising the American “anti-neocolonial” coalition, has seemingly dimmed. Just the other day, it seems, Democratic politicians were desperately talking out of both sides of their mouths as “activists” demanded the destruction – via legal or, seemingly just as often, illegal, means – of monuments like Mt. Rushmore.

But in a New York Times story published Saturday afternoon (just in time to run in the Sunday edition, probably on A1), the paper accuses South Dakota Gov. Kirsti Noem, one of the most outspoken governors in the country when it comes to resisting social distancing measures, of trying to supplant Vice President Mike Pence on the GOP ticket in November. 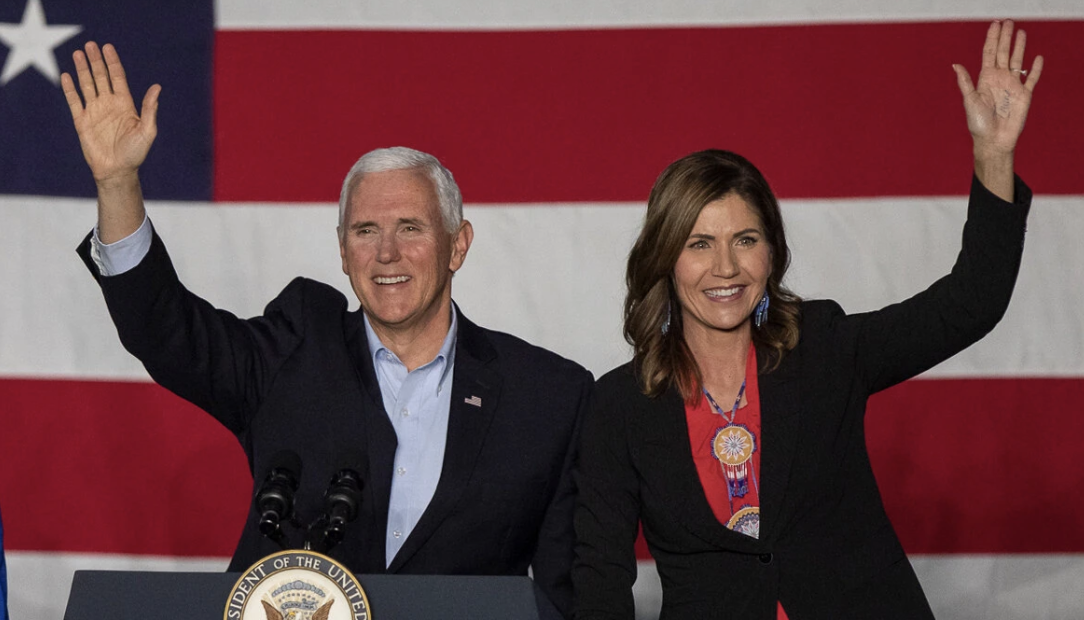 Despite dedicating two of its most prolific White House reporters (Maggie Haberman and Jonathan Martin, whose bylines appear on the piece, entitled “How Kristi Noem, Mt. Rushmore and Trump Fueled Speculation About Pence’s Job”) to the story, the NYT could only come up with anonymously sourced rumor and some vaguely plausible, previously unreported meetings to substantiate a story about perceived plot to oust Pence – a plot that probably never really existed.

There’s been no end to infighting both within the White House and across the GOP and Democratic political establishments over the past 4 years – that goes without saying.

But it seems like the NYT’s fixation on Noem, the paper’s fury over the governor’s opposition to things like mandatory mask laws, and the sick, liberal obsession with destroying Mt. Rushmore, have agglomerated into what will undoubtedly become a must-click NYT story.

And they say Zero Hedge reporting is “conspiratorial”…

WASHINGTON — Since the first days after she was elected governor of South Dakota in 2018, Kristi Noem had been working to ensure that President Trump would come to Mount Rushmore for a fireworks-filled July 4 extravaganza.

After all, the president had told her in the Oval Office that he aspired to have his image etched on the monument. And last year, a White House aide reached out to the governor’s office with a question, according to a Republican official familiar with the conversation: What’s the process to add additional presidents to Mount Rushmore?

So last month, when the president arrived in the Black Hills for the star-spangled spectacle he had pined for, Ms. Noem made the most of it.

Introducing Mr. Trump against the floodlit backdrop of his carved predecessors, the governor played to the president’s craving for adulation by noting that in just three days more than 125,000 people had signed up for only 7,500 seats; she likened him to Theodore Roosevelt, a leader who “braves the dangers of the arena”; and she mimicked the president’s rhetoric by scorning protesters who she said were seeking to discredit the country’s founders.

In private, the efforts to charm Mr. Trump were more pointed, according to a person familiar with the episode: Ms. Noem greeted him with a four-foot replica of Mount Rushmore that included a fifth presidential likeness: his.

But less than three weeks later, Ms. Noem came to the White House with far less fanfare — to meet not with Mr. Trump, but with Vice President Mike Pence. Word had circulated through the Trump administration that she was ingratiating herself with the president, fueling suspicions that there might have been a discussion about her serving as his running mate in November. Ms. Noem assured Mr. Pence that she wanted to help the ticket however she could, according to an official present.

She never stated it directly, but the vice president found her message clear: She was not after his job.

The notion that Pence’s place on the ticket is in jeopardy doesn’t seem to be based on much more than speculation surrounding the campaign’s reaction to the national poll numbers, which the NYT continuously cites as the basis for all the personal grudges and office gossip frequently splayed across the pages of America’s “Paper of Record”. However, Pence’s approval ratings among registered Republicans remains huge, even if his standing among moderates isn’t, and he has continuously proven his utility to the administration, along with his adeptness at playing the role of the president’s straight man.

Liberals have this image in their heads of the Trump administration as this snake pit, where everyone is immediately replaceable, and individual standing really all depends on the president’s daily whims. We suspect this is a deliberately facile oversimplification.

Around the 15th paragraph, the story involves into an exploration of Noem’s ascendance within Trump’s inner circle, which has apparently ruffled some feathers (shocker).

Senator Tom Cotton of Arkansas was in New Hampshire late last month, Senator Rick Scott of Florida is angling to take over the Senate Republican campaign arm to cultivate donors, and Representative Liz Cheney of Wyoming is defending Dr. Anthony S. Fauci, the government’s leading expert on infectious disease, while separating herself from Mr. Trump on some national security issues.

At the same time, Secretary of State Mike Pompeo is attempting to shore up his conservative credentials by pushing a hard line on China, and Senators Ted Cruz of Texas and Rand Paul of Kentucky are attempting to reclaim their standing as fiscal hawks by loudly opposing additional spending on coronavirus relief.

Drawing less attention, but working equally hard to burnish her national profile, is Ms. Noem. The governor, 48, has installed a TV studio in her state capitol, become a Fox News regular and started taking advice from Mr. Trump’s former 2016 campaign manager, Corey Lewandowski, who still has the president’s ear.

Next month, she’ll address a county Republican dinner in Iowa.

“There seems like there might be some interest on her part — it certainly gets noticed,” Jon Hansen, a Republican state representative in South Dakota, said of Ms. Noem’s positioning for national office.

Aside from a small number of large clusters at meat-processing plants or other large critical facilities – one of which was misleadingly labeled “the worst outbreak in the country” by CNN – South Dakota has reported just 9,371 cases among its population of roughly 885,000 people. 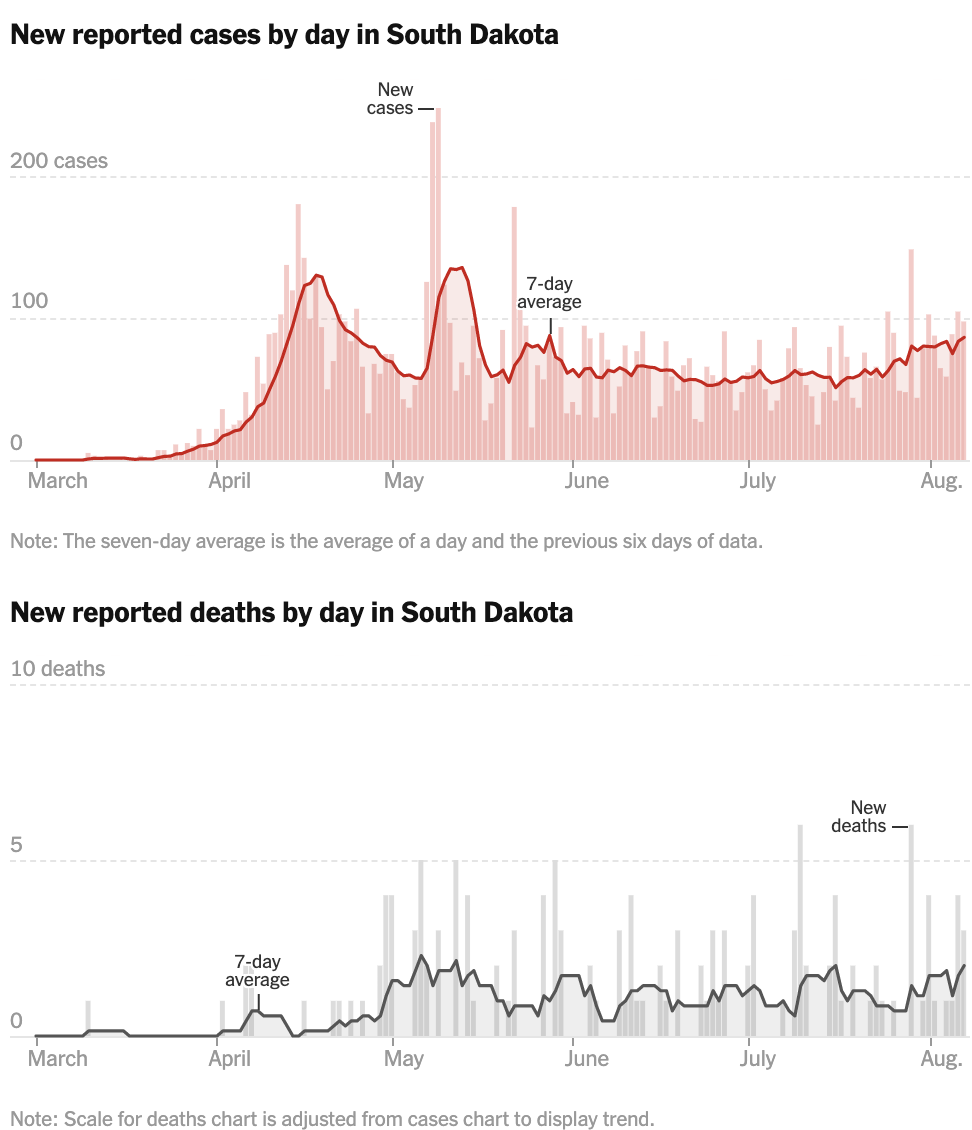 South Dakota’s rate of transmission is higher than some states, but lower than others, including several of its neighbors. But we suspect this won’t be the last hit piece on the state’s governor tied to her ambition and popularity – two qualities that the NYT says should be ‘celebrated’ in women, so long as it’s the right woman, ie one who subscribes to all of the NYT’s orthodoxies.