Update (1515ET): Some more signs of a ‘second wave’ of infections emerging in Europe were confirmed by Greece and the United Kingdom on Saturday.

Greece reported 203 new coronavirus cases Sunday, the biggest single-day jump since the beginning of the pandemic, bringing its total to 5,623. It also was the biggest jump in daily cases since April 21.

As infections in the US start to turn lower again following a brief bump, Former FDA Commissioner Scott Gottlieb said the US. looks like it’s headed for an infection surge in rural regions, now that the wave impacting the Sun Belt has subsided. But some critics have called bs on this.

“We’re probably going to have another wave,” he said on CBS’s “Face the Nation” on Sunday. There’s concern about largely untouched rural communities, which are “probably a bit more complacent” about virus risks, he said.

Rural spread is “going to be far more difficult to control if it’s more widespread,” he said. “We’re seeing indications of that right now – the wave spreading in the Midwest and the West.”

Arizona reported 816 cases, its lowest since late June, a six week low. The 0.4% increase was below the 0.7% daily average increase of the previous week. Total cases are now 186,923.

As we reported last night, the US surpassed 5 million confirmed cases (according to data compiled by Johns Hopkins) on Saturday evening (East Coast Time). 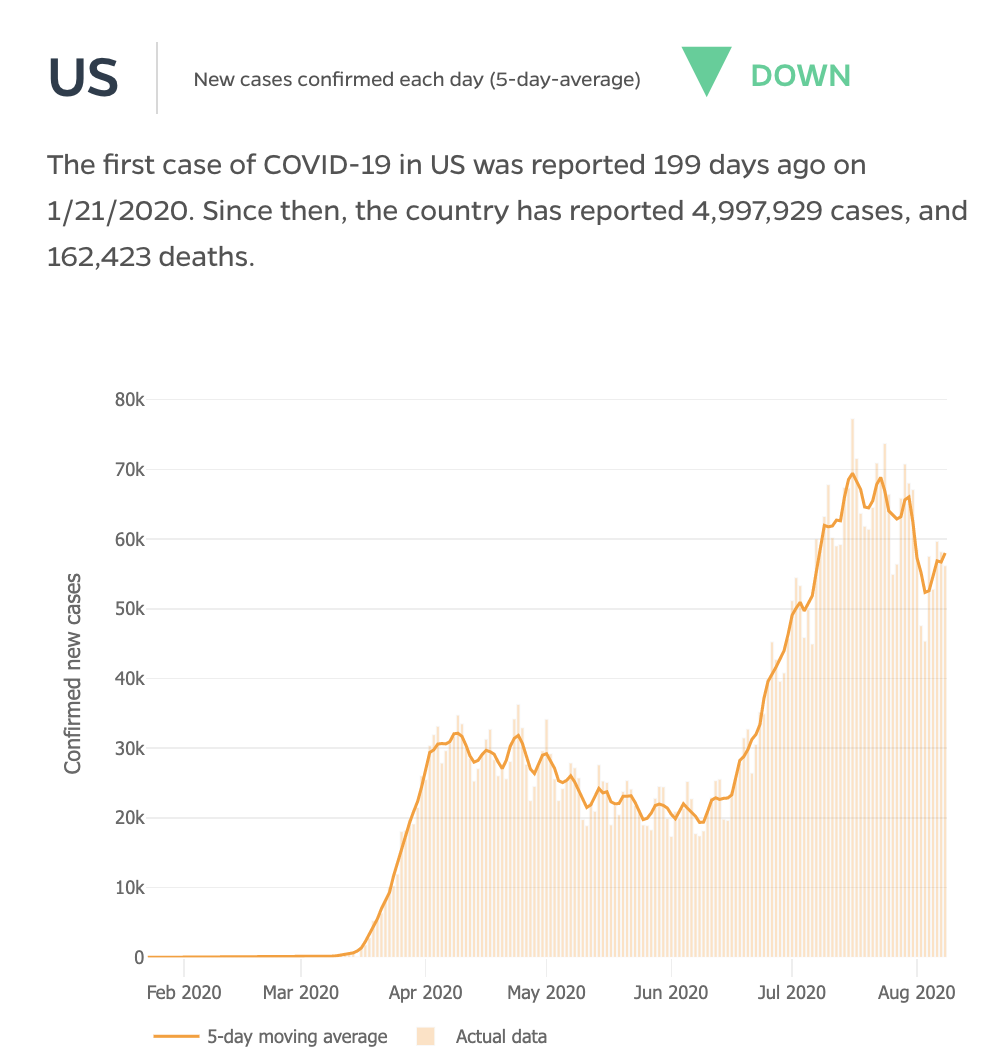 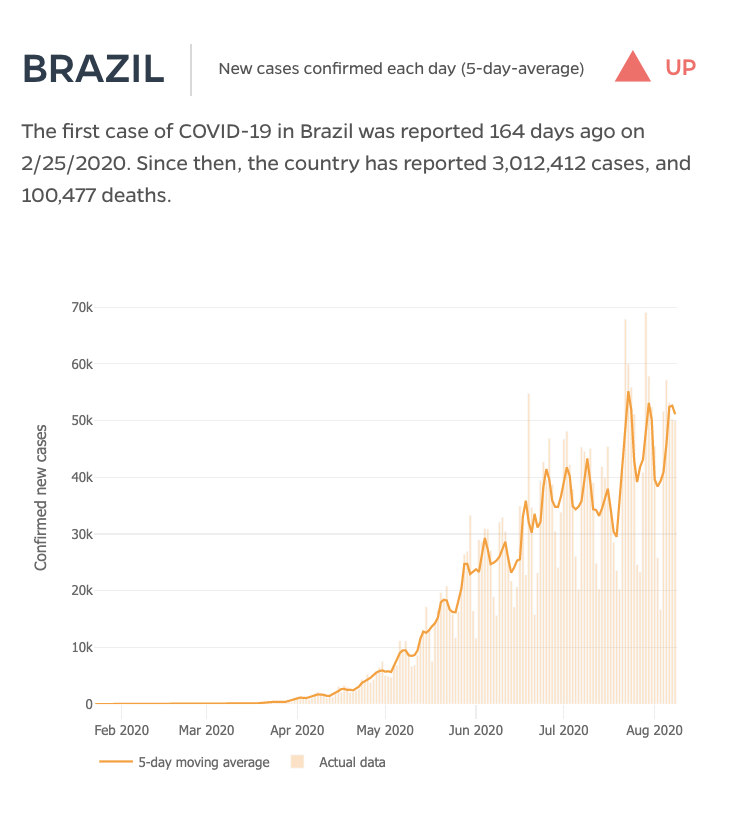 Though the numbers have rebounded a bit over the past week, on average, the daily numbers across the US have declined from a recent peak, as the outbreak in the Sun Belt outpaced the outbreak in New York. As the number of new cases in Fla. and Texas and California and Arizona has declined, some northeastern states, like New Jersey and Rhode Island, have seen a slight uptick in recent weeks (which inspired NJ, NY & Conn to add RI to the mandatory quarantine iist).

Globally, the number of confirmed cases is nearing 19.75 million.

Over in the EU, as governments sign more deals with major pharmaceutical companies to guarantee supplies of a vaccine that hasn’t even been proven safe and effective yet, EU Commissioner for Health and Food Safety Stella Kyriakides told Germany’s Handelsblatt in an interview that while a vaccine won’t immediately solve all the world’s problems, it will allow a step-by-step return to normality, the newspaper cited Kyriakides as saying. 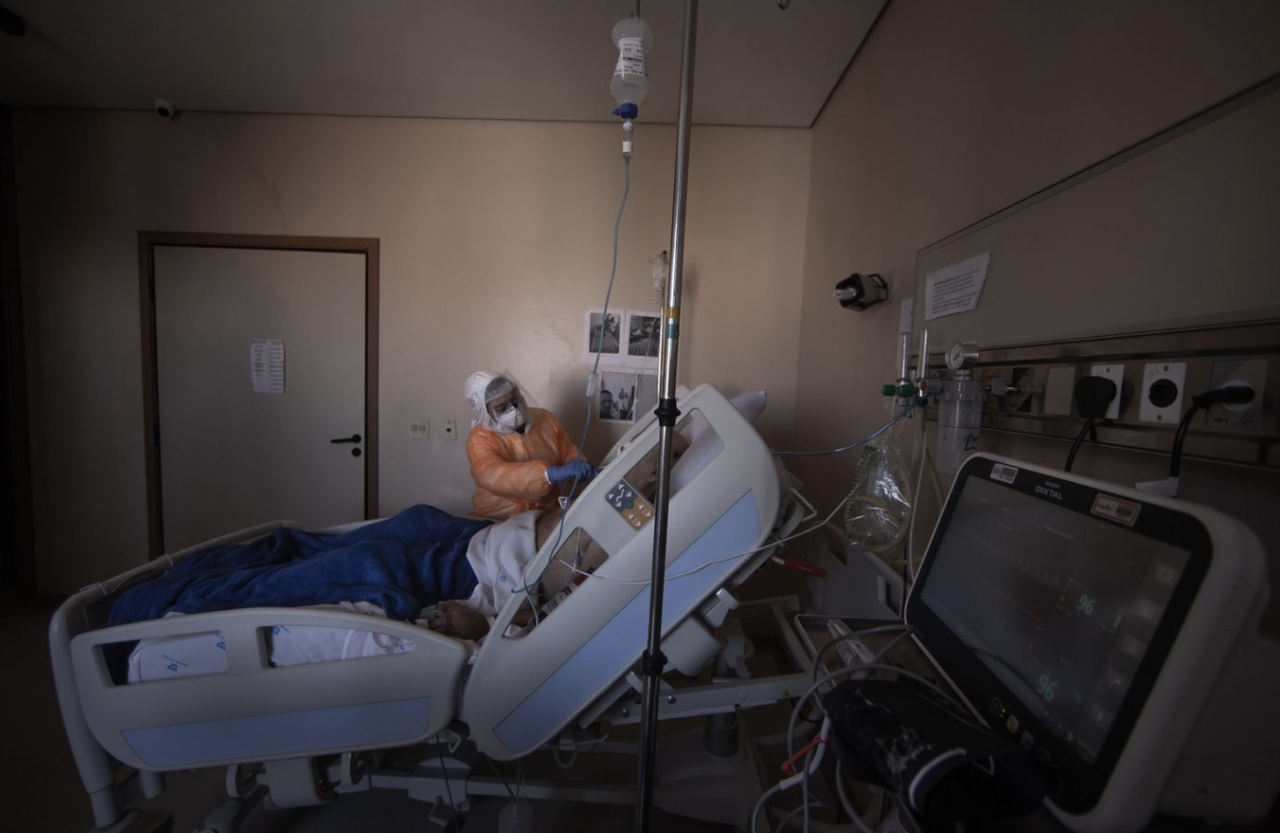 In contrast, in the US, Dr. Fauci, who has repeatedly reassured Congress (and the American pubic) that a vaccine would be available by the end of the year, admitted yesterday that we really don’t know how effective the vaccine will be: he says it may be only “50% to 60% effective.”

As Australia’s second-most-populous state, Victoria (the home of its second-largest city, Melbourne) continues to struggle with the country’s largest outbreak yet, neighboring New Zealand has just confirmed its 100th straight day without even a single coronavirus transmission.

New Zealand on Sunday marked 100 days since it was able to effectively eliminate the spread of coronavirus.

Here’s JHU’s daily chart reflecting the daily growth rates of the 10 fastest-growing outbreaks in the world. 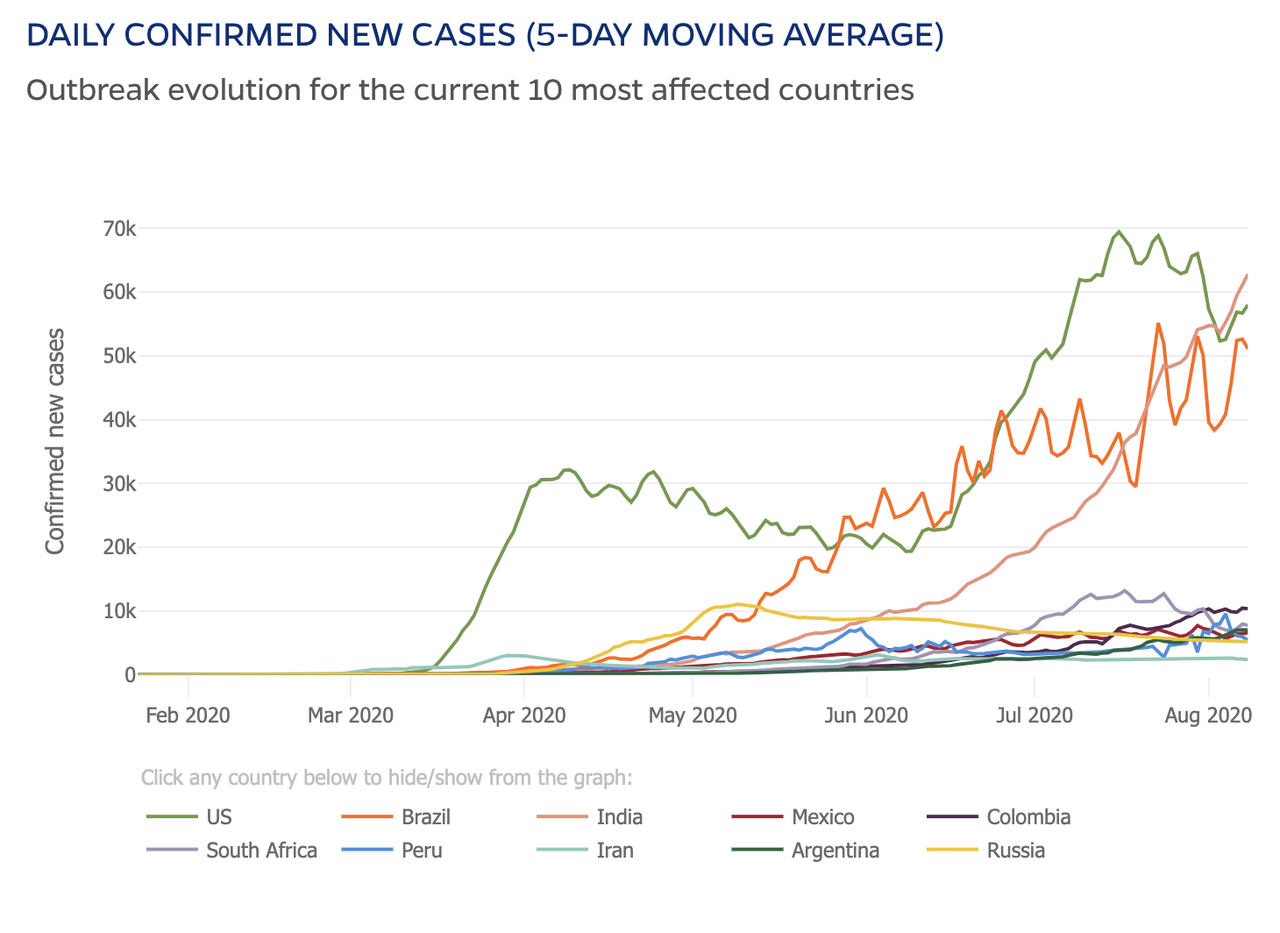 Schools Minister Nick Gibb said in an interview on Times Radio that opening schools is critical for reviving the country’s battered economy, by allowing parents to return to work. Prime Minister Boris Johnson told the Mail on Sunday newspaper the country has a “moral duty” to resume normal teaching and reopening. He called reopening schools a “national priority.”

Another lockdown would do an “enormous damage, and we need to avoid it more than anything” Speranza said in the interview, in a reference to Italy’s battered economy, which will – to be sure – benefit from the pan-European rescue fund.

How to Know if Government Is Too Big