Futures Rebound Back Near All Time Highs, Precious Metals Bounce After Crash

Futures Rebound Back Near All Time Highs, Precious Metals Bounce After Crash

Reversing yesterday’s sharp Nasdaq and precious metals-led selloff, S&P futures rebounded from Tuesday’s drop ignoring the continuing deadlock in Washington on more stimulus spending which could significantly delay the U.S. virus rescue package, and pushing the Emini to within inches of the all time high. 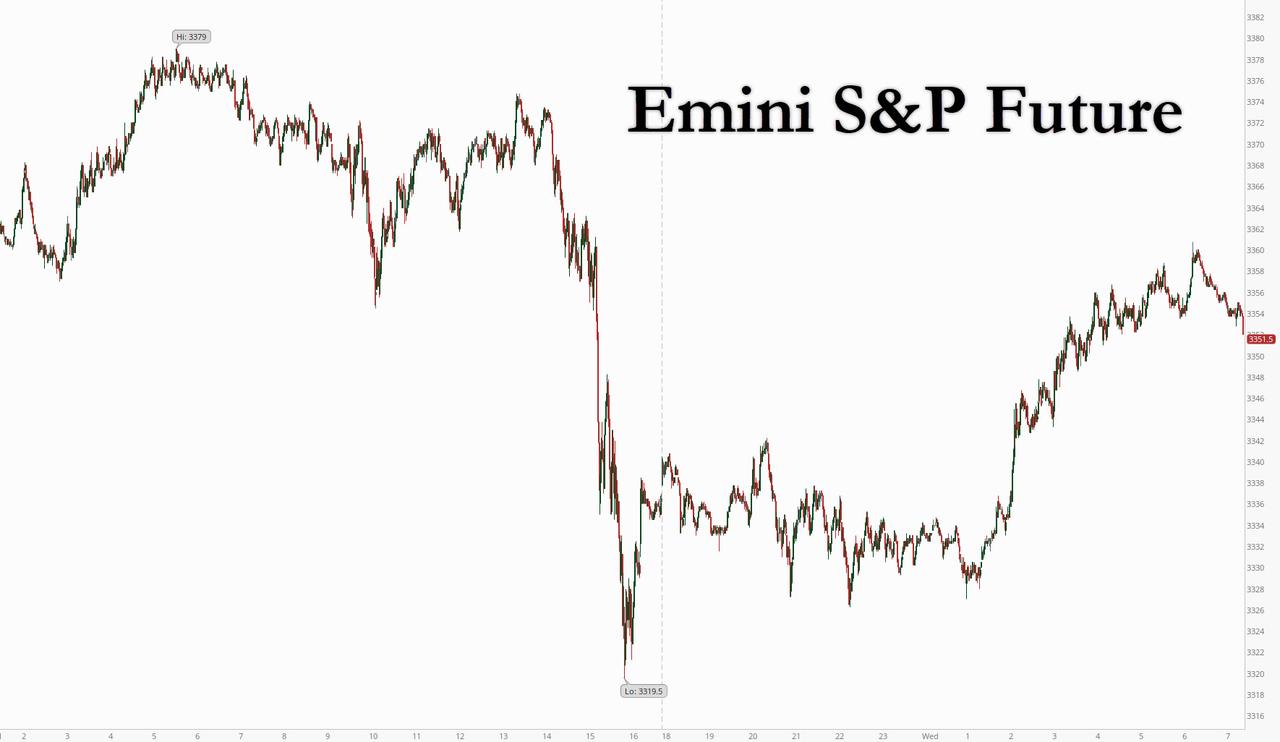 Energy stocks Exxon Mobil gained 1.1% and Chevron Corp added 1.5% in premarket trading, alongside gains in ConocoPhillips, Marathon Oil Corp. and other oil drillers all of which rose pre-market as crude futures approached a five-month high. Nasdaq 100 contracts also climbed after the index dropped for three days, an unheard of event. Tesla rose 5.7% as it announced a five-for-one stock split in an attempt to make its shares more accessible to employees and investors. The fact that a stock split has added billions to a company’s market cap just shows how broken everything in this “market” truly is.

On Tuesday, the S&P 500 Index fell for the first time in eight sessions after the benchmark index came within 0.15% of its closing record high, powered by historic fiscal and monetary stimulus and signs of a nascent economic recovery, and sparking speculation that a rotation out of the tech stocks may happen soon.

“The bias at moment is probably to fade the S&P 500 and fade risk generally,” said Societe Generale strategist Kit Juckes. “What happens next probably depends on what happens in U.S. equity markets (which are focused on stimulus)… That might be the decisive factor for short-term sentiment.”

Barring a bipartisan deal on stimulus, the U.S. economy could be left with measures U.S. President Donald Trump called for on Saturday through executive orders to bypass Congress.

“We have enormous uncertainty. It appears it’s getting harder for both sides to compromise as the election is nearing… Trump’s proposals would be smaller than markets have expected. There’s question over whether they are viable, too,” said Junpei Tanaka, strategist at Pictet.

Earlier in the session, mixed sentiment dragged on Asian stocks as sniping continued between China and the United States. Beijing also reported weaker-than-expected loan growth, while the U.S. Senate’s majority leader described stimulus talks there overnight as “at a bit of a stalemate”.

Investors are weighing whether a rotation in equities is playing out as pandemic high-flyers including AMD and Zoom Video tumbled on Tuesday. There’s some portfolio switching “given the constant flurry of concerns about crowded positioning and stretched valuations in growth sectors such as tech and communication services,” said Matthew Sherwood, head of investment strategy for multi-asset at Perpetual Investment. “Value and cyclicals continue to be supported by positive economic surprise momentum.”

With a better-than-feared (but still down over 30% Y/Y) second-quarter earnings season largely over, attention will turn to the upcoming U.S. presidential elections. Democratic candidate Joe Biden on Tuesday picked Senator Kamala Harris as his choice for vice president.

In FX, the Bloomberg Dollar Spot Index was unchanged after earlier declining for the first time in four days, which the euro reversed an early decline to rise for a second day. The Norwegian krone and the Swedish krona led gains among Group-of-10 currencies as oil and regional equities advanced. NZD/USD fell for a fourth day, sliding as much as 0.8%, as the Reserve Bank of New Zealand boosted its Large Scale Asset Program to as much as NZ$100 billion ($65 billion) and said negative rates remained in “active preparation.” Turkey’s volatile lira took another 1.5% pounding as concerns about its economic health and policy making took hold again, while New Zealand dollar’s dropped 0.4% after its central bank signalled it would stay highly supportive.

In rates, U.S. Treasuries yield climbed a couple of basis points to 0.67% in Europe to stay at a one-month high. The 10-year yield (+6.6bps) and 30-year (+7.5bps) yields saw their biggest increases in over a month on Tuesday, while the 2s10s curve steepened 4.6 basis points, the most since June 5th. The gap between U.S. two-year and 10-year Treasury yields is a metric closely watched for signs of a slowdown. On Wednesday, yields were cheaper by 1bp to 4bp across the curve with 20-year sector faring worst; long-end underperformance steepens 2s10s by more than 2bp to 51.3bp, 5s30s to 106.8bp, both highest since early July. 10-year yield at 0.671% is highest since July 7 and above its 50- and 100-DMAs. In Europe, bunds lagged by 1bp while 30-year German bond yield turns positive for first time since July. Refunding auctions resume with $38b 10-year at 1pm ET, conclude with $26b 30-year Thursday, both all-time high sizes. The WI 10-year yield ~0.69% is cheaper than July’s record low stop at 0.653%, which was ~1bp lower than WI yield at the bidding deadline.

In commodities, oil prices edged up after bigger-than-expected drop in U.S. inventories, with Brent up 0.6% at $44.75 a barrel. U.S. crude was up 0.5% at $41.80. Silver halted its selloff with gold, as investors decided the flight from precious metals amid advancing bond yields had gone too far. 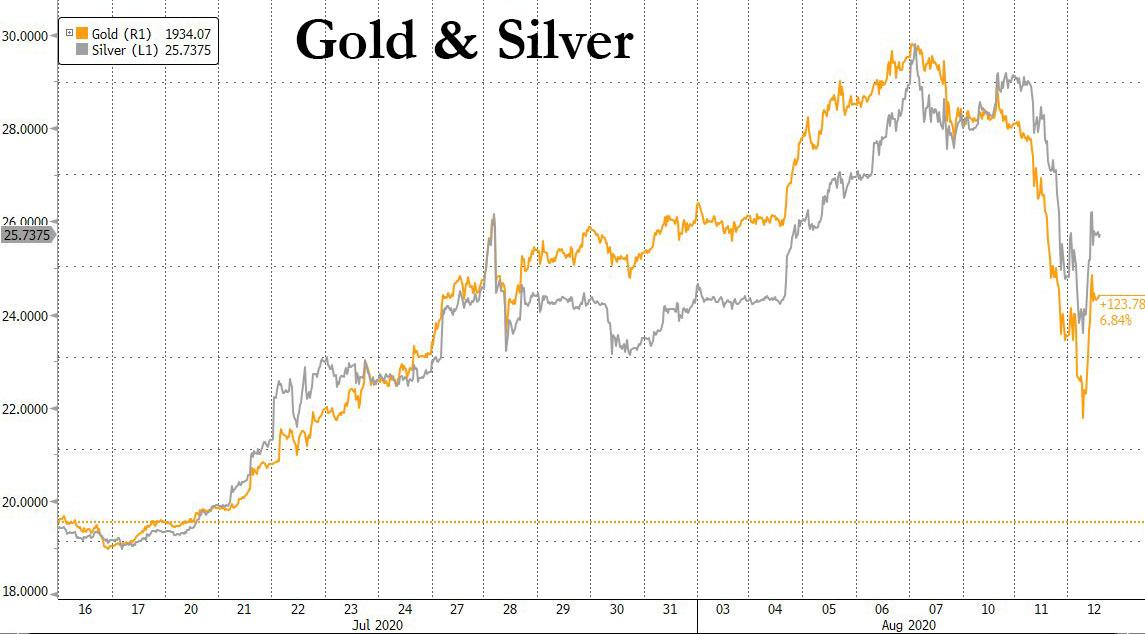 A quick look at global markets courtesy of RanSquawk:

Asian equity markets traded with a lacklustre tone following on from a weak lead from US where the major indices faltered in late trade after comments from US Senate Majority Leader McConnell dashed some stimulus hopes and saw the S&P 500 retrace its earlier gains which had initially pushed the index to within 1% of its all-time high. ASX 200 (-0.1%) was subdued with underperformance seen in gold miners following the aggressive pullback in the precious metal which retreated firmly below the USD 2000/oz level. Furthermore, nearly all its sectors languished in the red aside from financials which showed some resilience despite CBA posting an 11.3% decline in FY cash profits, while recent data releases contributed to the dampened mood after a further deterioration in Westpac Consumer Sentiment and with Wage Growth at its slowest pace in 27 years. Nikkei 225 (+0.4%) was choppy as participants digested earnings including SoftBank which was pressured following a drop in Q1 pre-tax profits, and NZX 50 (-1.3%) suffered from lockdown restrictions following reports of the country’s first COVID-19 cases after having gone 102 days without any locally-transmitted spread of the virus, although some of the losses were stemmed following the RBNZ announcement to expand its QE program. Elsewhere, Hang Seng (+1.4%) and Shanghai Comp. (-0.6%) initially conformed to the glum mood despite a strong liquidity effort by the PBoC which injected CNY 140bln through 7-day reverse repos as participants also react to weaker than expected lending data from China and as US-China tensions lingered. Finally, 10yr JGBs are weaker in the aftermath of yesterday’s extended retreat and following recent losses in T-notes, while participants were also kept sidelined amid the enhanced liquidity auction for longer dated JGBs which attracted weaker interest than prior.

European equities trade flat/firmer after an uninspiring cash open [Euro Stoxx 50 +0.1%] as sentiment somewhat improved from a downbeat APAC handover. News flow has again been light in early hours with little by way of fresh fundamental catalysts to shift the dials. That being said, the DAX (-0.2%) holds its position as the laggard as heavyweight SAP (-0.9%) fails to trim losses amid the broad tech underperformance seen Wall St and Asia-Pac, whilst the FTSE 100 (+0.6%) trades on the other side of the spectrum bolstered by its heavy energy and financials exposure. Sectors are mixed with no clear risk profile to be derived, with the breakdown seeing banking names among the gainers after ABN AMRO (+5.3%) reported lower than expected loan loss provisions whilst Q2 operating income was more-or-less in-line with forecasts. The energy sector meanwhile is propped up by price action in the oil complex, whilst Travel & Leisure remains pressured amid fears of the impact of resurging cases in the sector. In terms of individual movers, Sunrise Communications (+26%) soared at the open and held onto gains as Liberty is to acquire Co. for CHF 110/shr for a total of CHF 6.8bln. Note, shares closed at CHF 86.20 yesterday. E.ON (-1.6%) remains in the red after cutting its FY adj. net guidance and EBIT guidance. Asos (+4.6%) remains firmer, albeit off highs, after the group noted that profit before tax for the FY is expected to be significantly ahead of market forecasts.

In FX, the Kiwi has fallen further from recent highs on renewed 2nd wave pandemic concerns following an outbreak in Auckland and reports that up to 4 more people may have contracted the virus, while latest negative OCR vibes via the RBNZ have also undermined sentiment more so than the LSAP extension and increase to Nzd 100 bn from Nzd 60 bn that was widely expected. Nzd/Usd is now hovering below 0.6550 and Aud/Nzd fading from 1.0900+ peaks overnight, as the Aussie drifts back towards 0.7100 in wake of Westpac’s August consumer sentiment showing a downturn in morale and Q2 wages sub-consensus for the weakest y/y rate of growth in 27 years.

In commodities, WTI and Brent futures eke mild gains in early trade with prices supported by the larger-than-expected draw in private crude inventories (-4.4mln vs. Exp. -3.1mln), whilst EIA’s STEO also provided a bullish outlook, with 2020 and 2021 world oil demand forecast upgraded by 40k BPD and 30k BPD respectively, whilst also lowering 2020 US production forecasts by 370k from the prior report. Aside from that, news flow has been scarce, WTI September meanders on either side of USD 42/bbl (vs. low USD 41.53/bbl) whilst its Brent October counterpart briefly rose above USD 45/bbl after printing a base at USD 44.49/bbl. Elsewhere, precious metals see gains in what seems to be a consolidation from yesterday’s dire losses, spot gold tested USD 1950/oz to the upside (vs. low 1863/oz) before coming off highs, and spot silver briefly reclaimed a USD 26/oz handle from a sub-25/oz base.  Meanwhile, due to price fluctuations, the Shanghai Gold Exchange said it will increase margin requirements for gold contracts to 12% from 9%, trading limit to be raised to 11% from 8%, whilst margin requirements for silver contracts will also be raised to 16% from 13%, trading limit to be raised to 12% from 15%. In terms of base metals, Shanghai copper declined in tandem with Chinese stocks in the run-up to US-China meeting, whilst the stalemate on US fiscal stimulus added to the downbeat tone overnight. Dalian iron ore prices retreated overnight after the China Iron and Steel Association predicted iron ore discharging difficulties and port congestion issues are seen easing later this month.

Trader: “The News Isn’t Getting Any Prettier… Markets Are At A Crossroads”

Debate Over Brexit Fee: Would Non-Payment Constitute Default? Who Owes Whom?