With the retail sales report on deck tomorrow morning, traders will be curious to see if consumer spending indeed fizzled in July just as the fiscal cliff discussed earlier hit, and as consumers in impacted states hunkered down.

Conveniently, Bank of America provided its monthly card spending update earlier to give a glimpse into not only consumer behavior in the first week of August but also all of July. According to the bank, total card spending, as measured by aggregated BAC credit and debit cards, increased 2.1% yoy for the 7-day period ending August 8th which is an improvement from the -3.0% yoy pace last week. One explanation posited by BofA’s economists is that “the timing of the pay period likely held back spending last week and created a boost this week. Smoothing through, the story remains the same: card spending is moving sideways in a choppy fashion.”

Below are some key observations:

1. Unemployment insurance (UI): The extended benefits from the CARES Act expired on July 31st, leaving UI recipients with a reduction in income. BofA examined spending trends of the population of card holders who receive UI through ACH (direct deposit) and compare to those that do not, broken down by income cohort. In general, and as one would expect, the YOY rate of growth for UI recipients declined but it increased for the broader population. The differential was the largest for the lower income cohort.

2. Back-to-school (or not): The back-to-school (BTS) shopping season is meaningfully different this year with many students not returning to school in person. To gauge the impact of such, BofA created a composite of retailers that are most highly correlated to the August BTS and examine the trends this year vs. last. Data is also shown on a regional basis given the varying timelines of school openings across the country. There is a clear turning point in mid-July where the BTS composite diverged relative to last year. The BTS composite has shown no growth since early June this year vs. a 20% increase between early July and August last year. That said, interestingly, there is a meaningful increase in online department store spending over the most recent period, which could reflect BTS shopping. 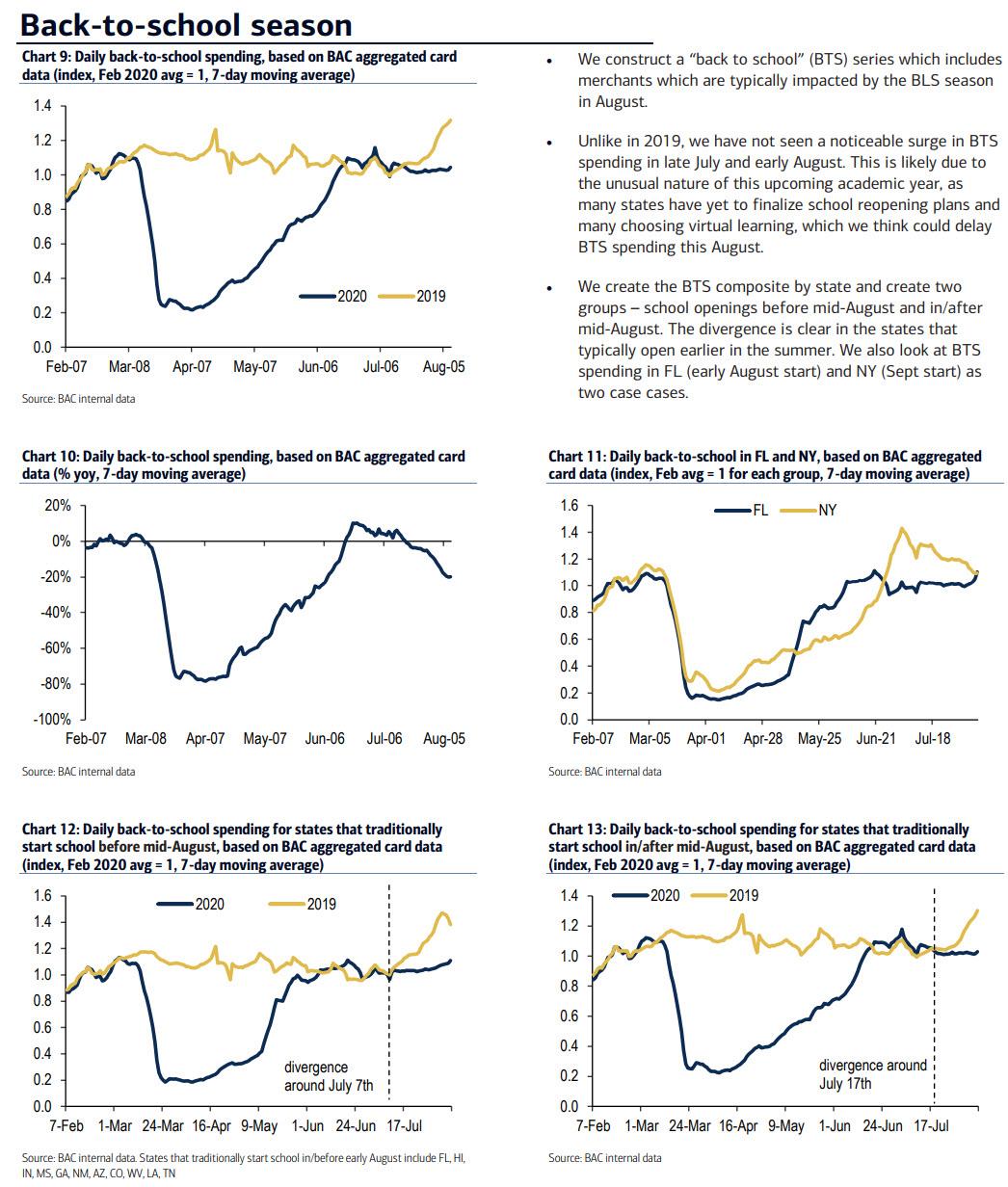 3. Monthly data for July: The BofA census retail sales forecast is based on the BAC data which showed that retail sales ex-autos improved a modest 0.3% mom SA in July, bringing the 3-month moving average to 5.4%. 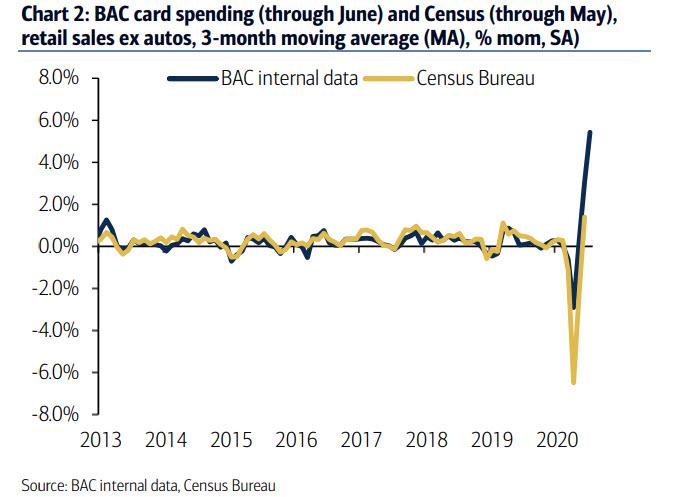 The bank forecasts retail sales ex-auto from Census Bureau to also increase by just 0.3% mom, which would bring the Census 3-month moving average in line with that of BAC card data, and would also be a material miss to consensus expectations of a 1.3% increase.

However, BofA cautions that the risk is to the upside given that grocery stores spending, which dropped 1% mom, has a bigger share in BAC retail spending than in the Census retail report. 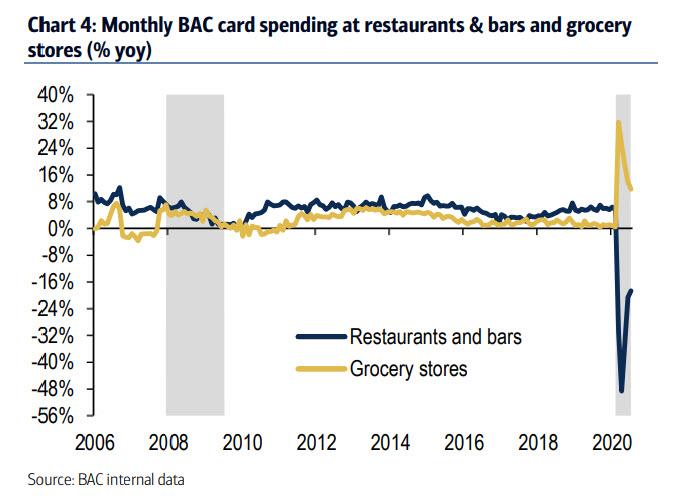 The charts below show the “big picture” in daily card spending by major category. 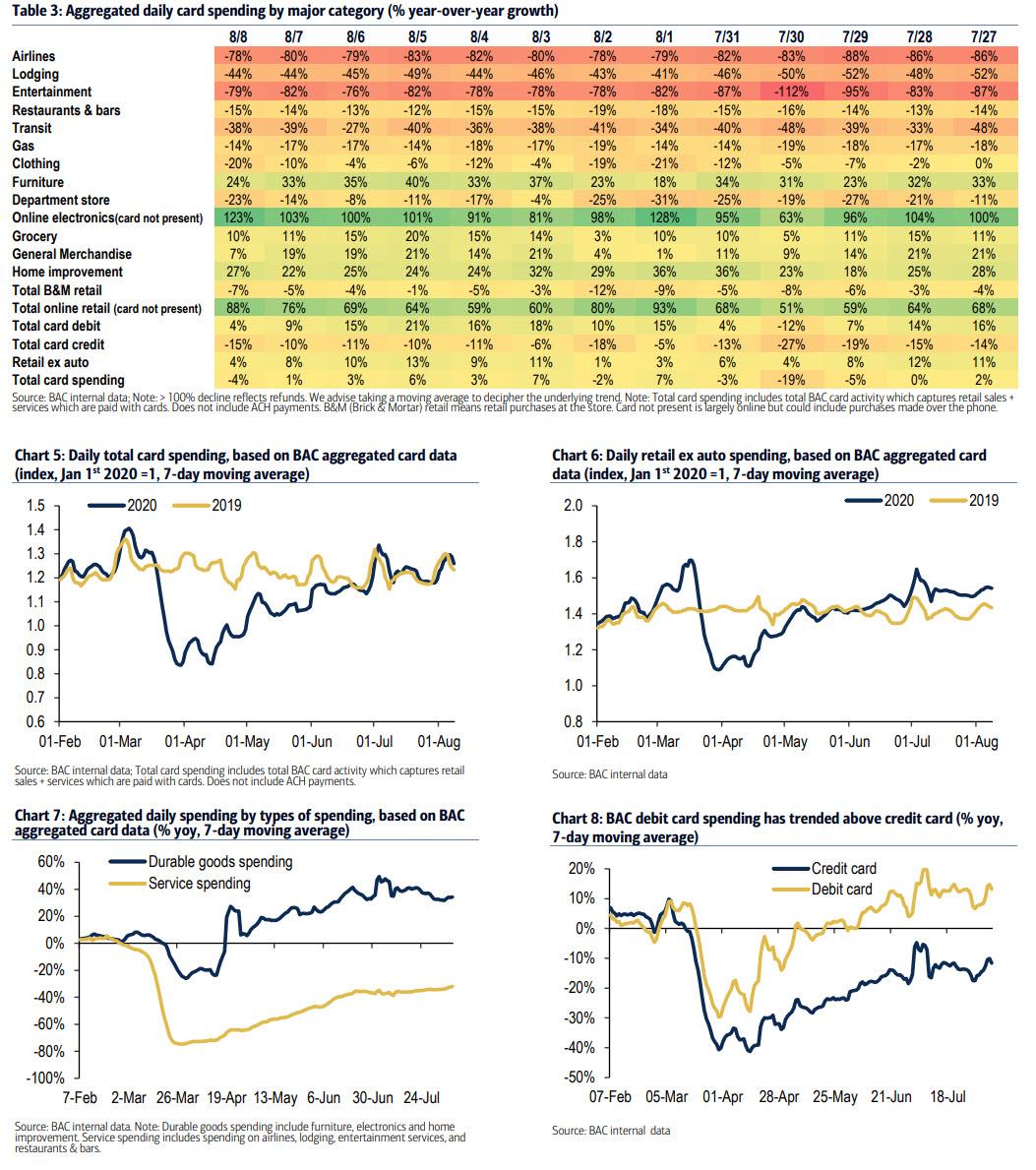 Spending on a regional basis shows that most cities that continue to have shutdowns or are otherwise affected by ongoing riots, continue to lag. 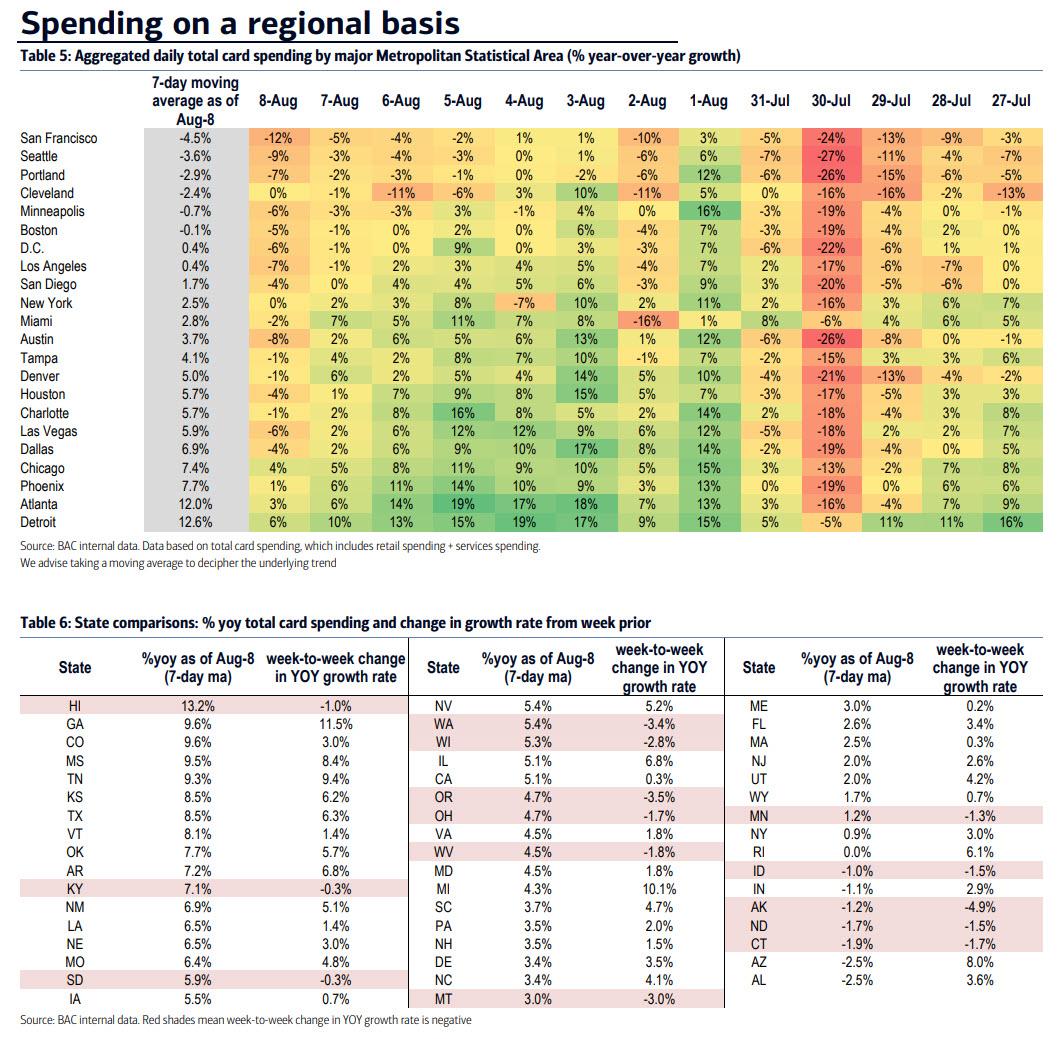 Broken down between online and “brick and mortar”, the spending winner is all too clear: 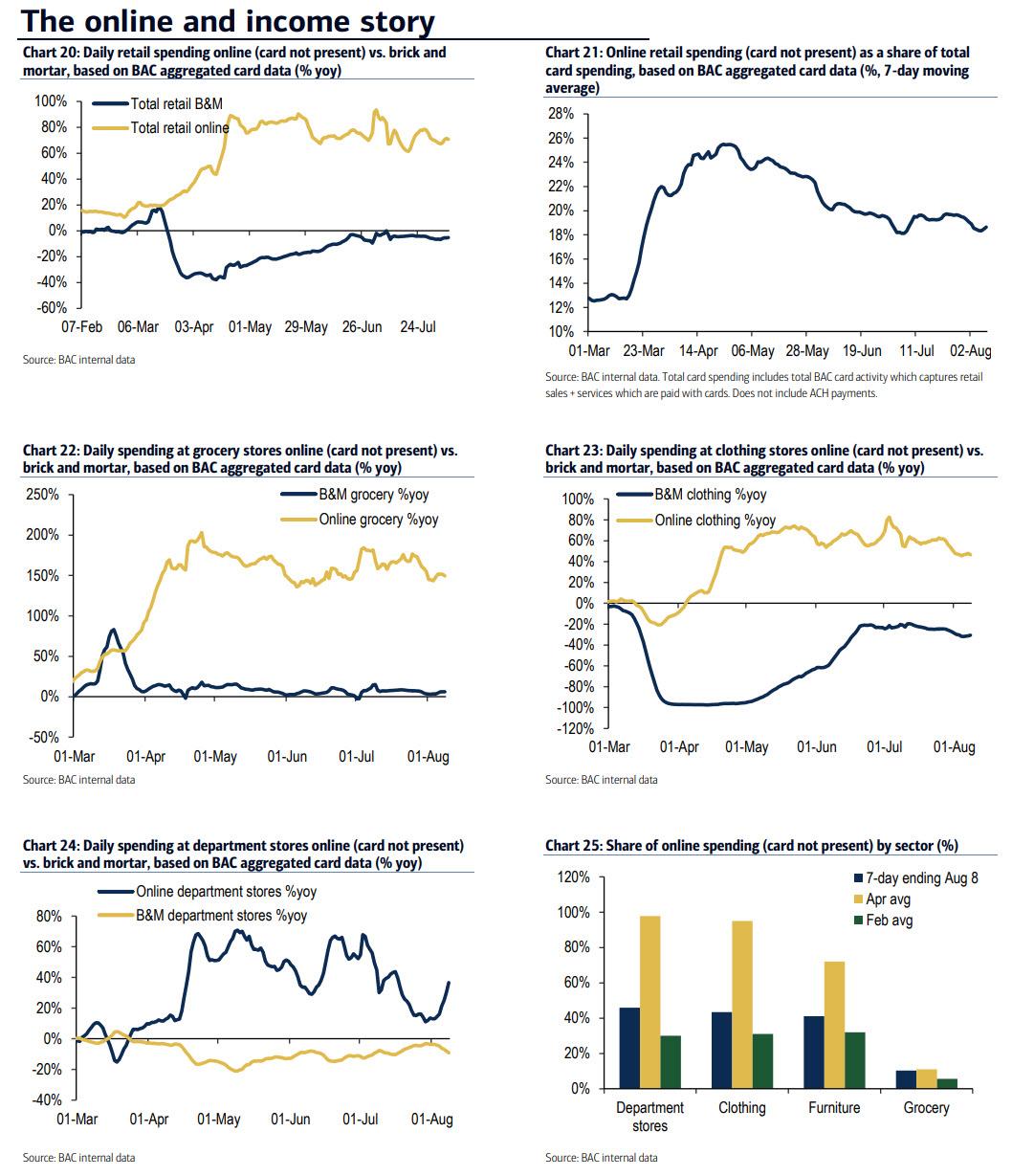 And, as observed previously, the spending recovery continues to be led by the lower income (those earnings <$50K cohort which is most dependent on government benefits): 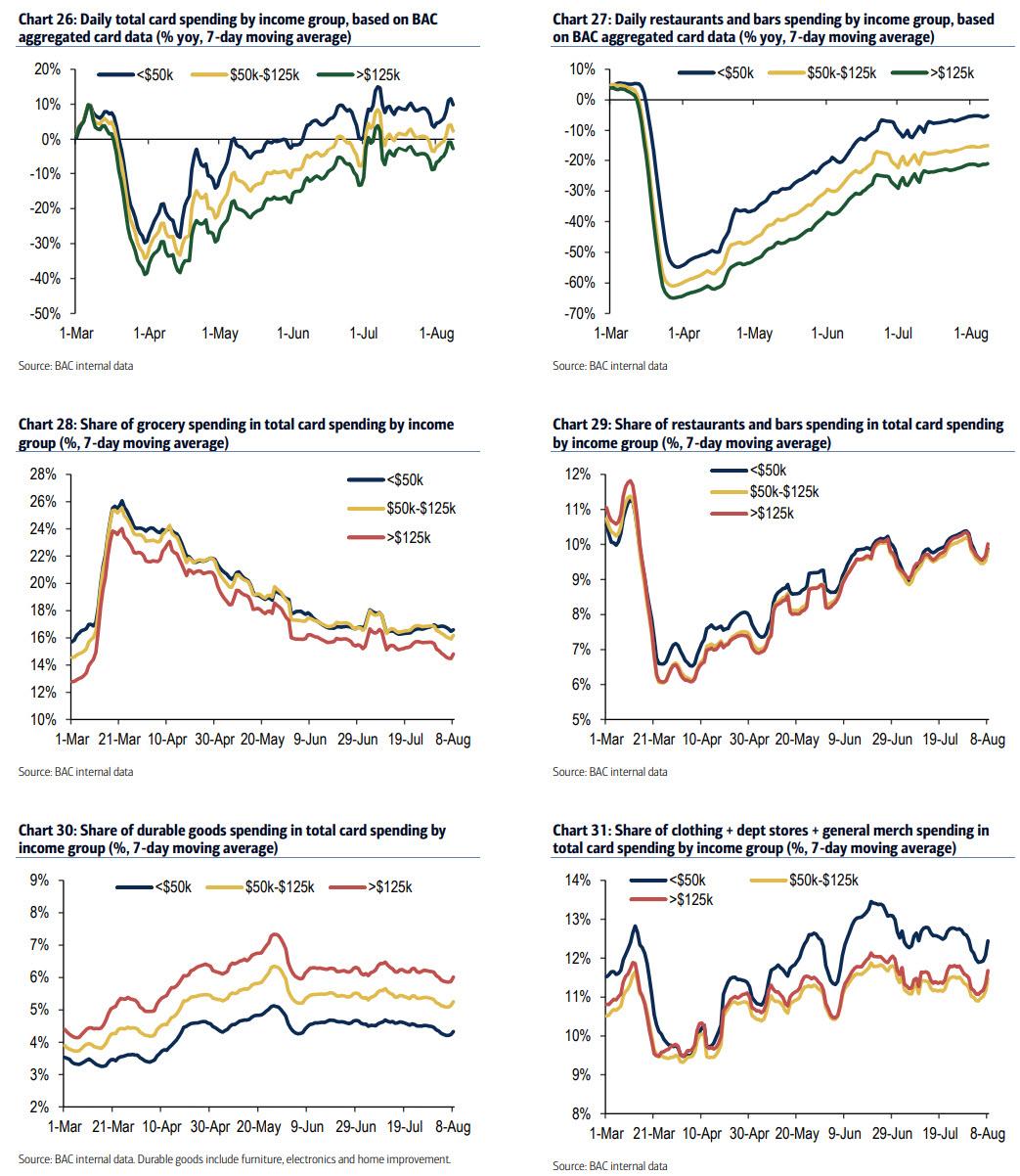 If You Believe Life Will “Return To Normal”, You Have A Fundamental Misunderstanding Of The Times In Which We Live

Schumer: Americans’ Jaws Would Drop If They Knew What Happened In White House Meeting